One last post of miscellaneous stuff to mark the end of 2017.

My Grandad was born on this day in 1924. He passed away on Boxing Day, just shy of his 93rd birthday. Being one of our UK relatives, we didn’t visit him much, but we did manage to see him during our UK trip this year. RIP.

Most popular posts, by number of comments, are all transport posts:

The most number of comments on any of my posts ever? 125 on the February 2016 post on Skyrail.

(See also: a similar post from ten years ago)

Edit 2/1/2018: Most popular posts by page hits: I’ve looked through the stats and found the ten most popular blog posts of the year, ranked by page hits from March to December. (March is when I switched on HTTPS. AWStats treats these separarely to the HTTP stats of Jan/Feb.)

The post/s this year I’d ask people read more than any other?

Partly written while away on holiday in Europe, I was particularly pleased with this one:

Congestion is not the enemy

The Disability Discrimination Act, and the subsection, the Disability Standards for Accessible Public Transport are far more specific than just “no steps”. Melbourne’s station ramps, particularly the older ones, are too steep for some people in a hand-operated wheelchair to use, and can cause problems for people with other mobility difficulties.

Being the end of the year, I thought I’d try to clear out a bunch of old blog post drafts.

These are semi-written snippets that I don’t feel like saving to expand into longer pieces, but also don’t want to simply throw away.

Dream 1: The first works in the Bentleigh level crossing project (from 2016) started, but it turned out it involved a construction crew coming to dig up my entire back yard. For some reason they also had to pack up all my books into boxes. The digging crew included local state MP Nick Staikos. The project would be way more complicated than in real life, with multiple railway lines and junctions all over the neighbourhood.
(Possible influences: thinking back to when we were moving my Dad; a photo shown on Have You Been Paying Attention with MPs digging.)

Dream 2: In an espionage thriller, various agents kept trying to attack me in the large house (and garden) I lived in. Eventually some other agents approached me and convinced me they were on my side, that they had to recruit me due to accidentally publishing vital codes embedded into the illustrations of a children’s book. They were about to explain what I had to do when… the alarm went off.

Dream 3: Following my sister in car, watching as truck almost merges over her. Scary. Mixed in with some kind of cowboy/western crime siege that included modern cops.

Bulk discounts: Some time ago I discovered that when there’s a “two for (discounted price)” offer in Safeway, you get the discounted price for a 3rd, without buying a 4th. It just has to be two or more. I haven’t checked if Coles is the same.

Self-serve: The local Coles and Safeway got self-serve checkouts some years ago. I’m at the point where I generally prefer them, as long as there’s no long queue and I’m not buying lots of stuff (which I rarely do in one hit anyway). I can pack my bags the way I want to, and I wasn’t very impressed the one time I used a staffed checkout and my apples got dumped too rapidly into a bag, risking bruising.

I also use Aldi sometimes, where you end up packing your own bags anyway, though it’s always with a sense of rush to not hold up the people behind you, which I guess is why they have that area near the exit so you can take your time to re-organise anything that needs adjustment. Some stuff at Aldi is just as good as the other supermarkets. Some stuff… not so much.

Half-written back in 2014; I have no idea why I didn’t just post this at the time

I’m not going to pretend I know all the ins and outs of the Commission Of Audit, but let’s assume for a moment that it is important to get the budget back out of deficit. (I don’t buy the government’s claims that Labor needlessly spent up big… around the world, many seem to think that stimulus during the Global Financial Crisis was the right thing to do.)

The problem for me is that, contrary to the aim of being truly independent, the Commission seems to have only looked at the measures that a conservative government such as Abbott’s would consider, and more importantly, it would seem that some of the more obvious things are not going to be done.

Michael West in The Age has a nice article on this:

So we have multinationals paying minimal tax, massive government waste, a constellation of tax lurks for the wealthy, and taxpayer-backed banks racking up super profits. But what does the Commission of Audit do? Tells us to hit up the poor, the sick and the aged.

There’s probably a lot of stuff that should be looked at, but one sticks out for me: the Aged Pension.

The Aged Pension is costing $40 billion per year — and rising.

It seems to me that ultimately, there should be a lot more means testing of benefits, to ensure the people getting government handouts are those who actually need them.

There are quite a few seniors out there who are eligible for handouts and various government concessions, but don’t need them. They have substantial assets — even excluding the most holy family home.

I hear via friends of seniors who are utterly loaded, some working part-time in high-paid jobs such as dentistry, able to travel on Seniors discounted public transport tickets, claiming various other government benefits with little or no means testing, and planning their next big European holiday.

Others of course do genuinely need government assistance to get by and have some enjoyment of their retirement.

When I was a student, we didn’t have much money. I had a part time job, but needed (and got) some Austudy assistance to help me keep studying — as well as a HECS loan to pay my university fees. The HECS loan got paid back, and the taxes I’ve paid since would have back the Austudy many times over.

I’d hope that, via my mostly consistently-growing superannuation, by the time I reach retirement I won’t have any great need of government assistance. But if it continues to be a free-for-all, then of course it’s going to continue to cost big bucks for the government to provide.

The key might be to continue to help people save for themselves via superannuation, to properly means test these benefits (including the family home, perhaps via a kind of loan paid back from the estate after the person passes on?).

I reckon that’d be fairer to slashing and burning Medicare, and demanding that people work until 70 before they can access benefits — which will hurt only those who can’t get by without them.

Up at the in-laws farm early last year there were tumbleweeds galore. This particular type of tumbleweed is the wacky-sounding “hairy panic grass“, or there’s the Latin term: Panicum effusum. 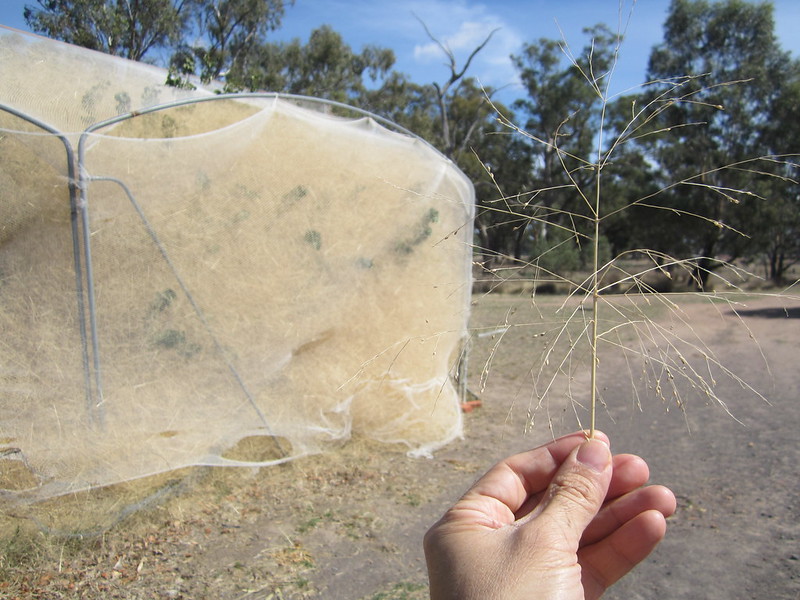 But when you get millions of them in a single spot, it’s a different story.

Here’s a Channel 7 news story about them causing problems in Wangaratta:

In 2017, world events have been a bit chaotic, but on a personal level, for me it’s been a pretty good year.

So finally, happy new year. Thanks for reading.

Happy New Year to you. I have tried the three for the price of two discounted a few times. Sometimes it works, sometimes not. I remember seeing the eerie tumbleweeds near Swan Hill. It felt like we were driving in the American mid west.

When you are shopping at Aldi you are not meant to pack your bags at the registers – that is what the packing bench after the registers is for.

1: Unload items in trolley onto register belt
2: Wait until you get to the Aldi staff member and then Swing your trolley around and align it with the register’s trolley indentation
3: ALDI staff member will then scan your items
4: You load the items back into your trolley (not into bags)
5: Pay for your items
6: Unload your items in trolley onto packing bench
7: Take your time packing items as you wish into your bags

Condolences for your Grandad.

@Anonymous, trolley? What trolley? I don’t use one.