Southland station is now officially opened, with trains stopping there from early this morning. pic.twitter.com/f6gUU0Oz4I

Despite the rain, there was a pretty big crowd, come to have a sticky-beak and/or just do some shopping. Freebie snags and coffee and cupcakes were on offer. 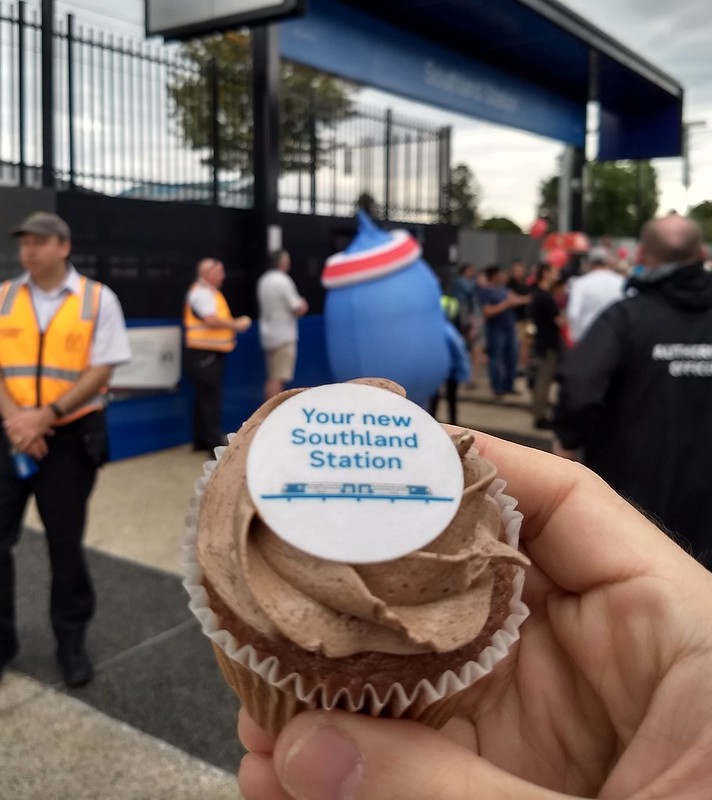 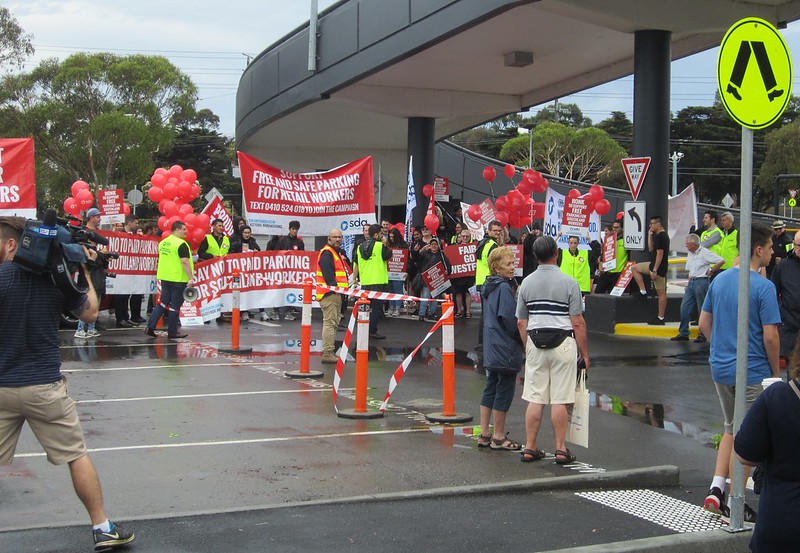 Also greeting passengers was a union protest about car parking fees imposed by Westfield on shop staff. They’ll now have to pay $5 a day to park at the centre. Of course, some might be able to use the train now, but that’s unlikely to be an option for all of them.

Westfield needed to do something to prevent train users parking all day adjacent to the station. They chose to impose parking fees, implemented with pay stations and automatic gates. What they could have done was simply impose a 4 hour limit on the car parks on the western side of the highway (eg near the station), while leaving the other spots alone.

Lower profile, sitting in the car park during the opening event was a Vix van — no doubt to quickly respond if any of the Myki equipment broke down during the first hours of operation. It seemed to all work fine. 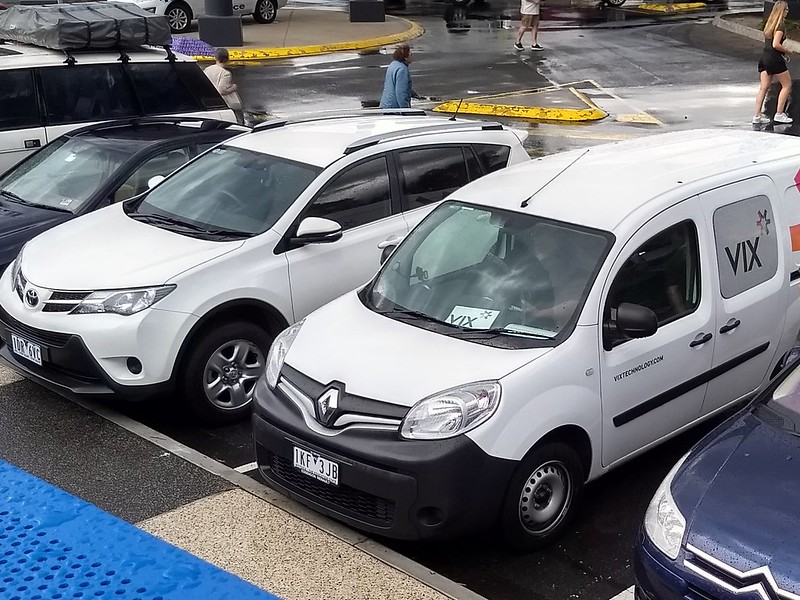 The outbound platform is accessed by a ramp.

This platform has PSO facilities and toilets — Exceloos are built into the structure, which might be a first for a Melbourne railway station. (McKinnon has something similar as part of the building, but this is managed by the local council, and is outside the paid area of the station.) 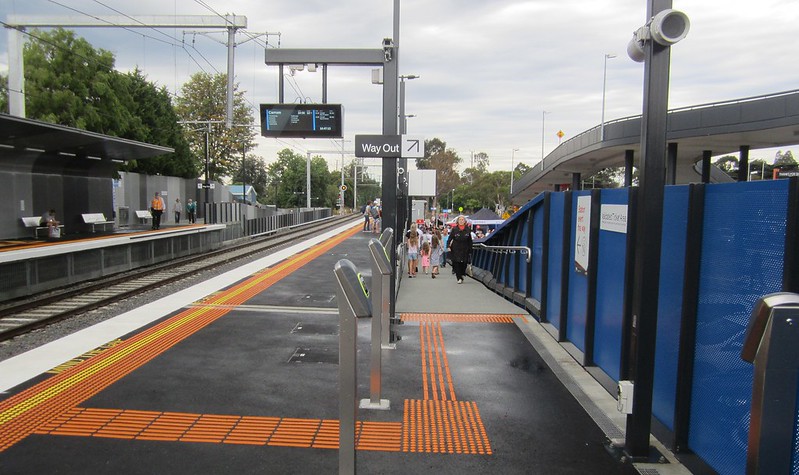 The citybound platform is reached via a subway and either ramps or stairs. Both platforms have the new fast Myki readers, and LCD screens showing the next three trains.

Both platforms have rain cover, though on the outbound platform it’s nowhere near the entrance. 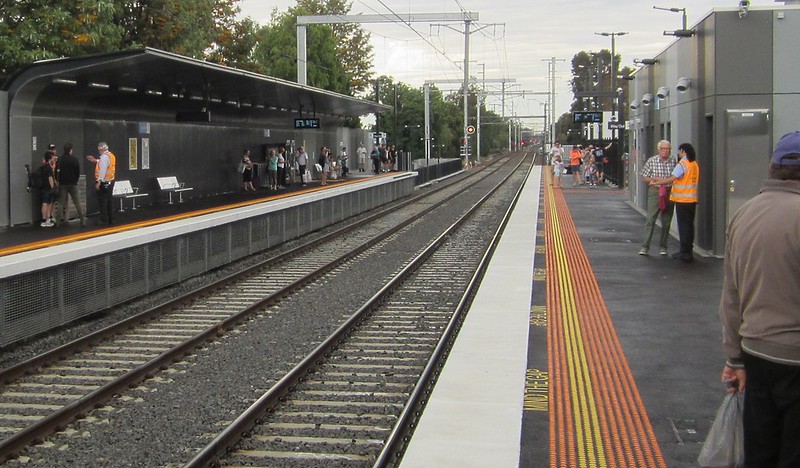 The entrance to the station has a network status screen, a pay phone (remember them?) and a Myki machine. The rather grand high entrance portico thingy doesn’t provide any shelter — the Myki machine was noticeably wet. 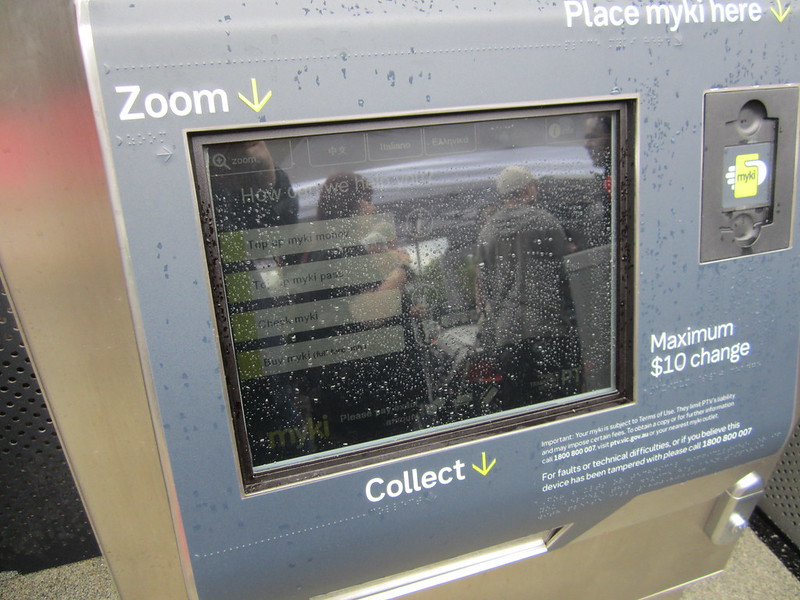 At least the entrance catches the eye when you’re looking for it coming out of the centre, which is about 100 metres away across the car park. 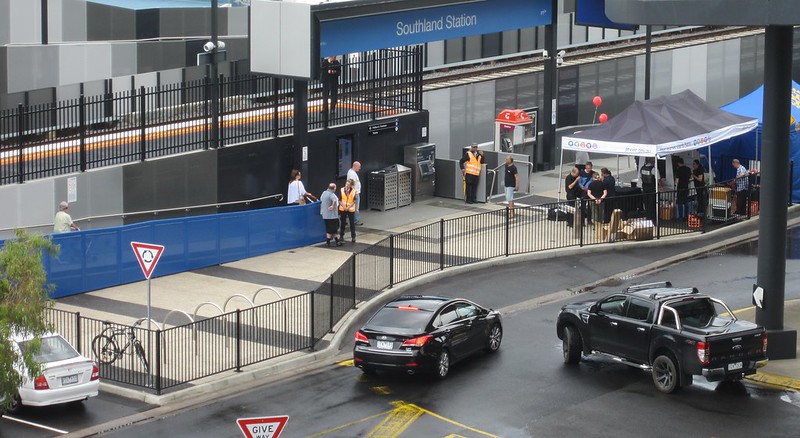 Fencing and signage (curiously in the style of station signs) direct people which way to go to the centre or to Bay Road. It was notable that some people were seen walking entirely the wrong way towards the centre, but that may have been because special event facilities were obscuring the way. 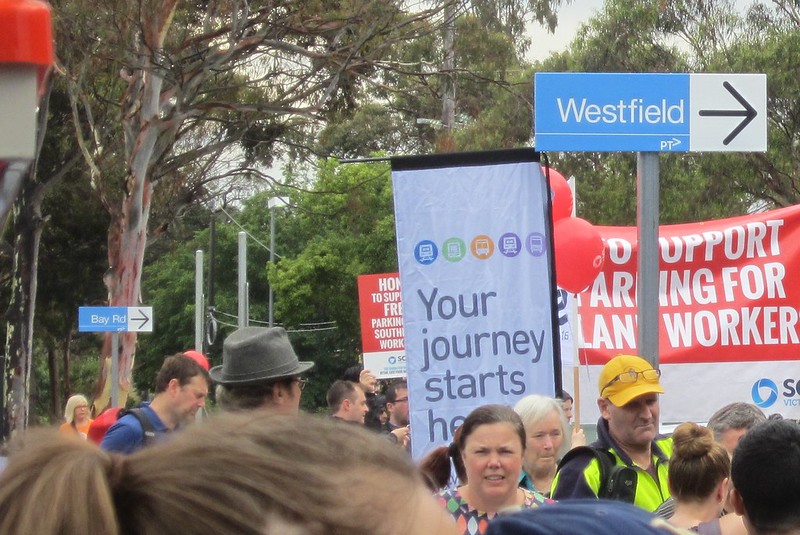 While it’s good that Westfield has provided a fairly direct path, they haven’t done a good job on the drainage. The rain this morning resulted in parts of it having huge puddles. 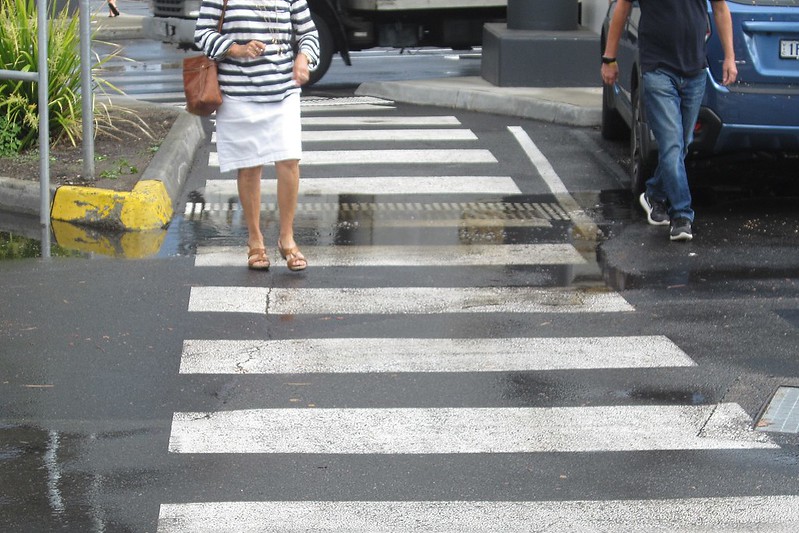 As far as I saw, there is no departure information at the shopping centre exit or the station entrance, so you’ll need to use the PTV phone app to tell if you need to hurry or not to make a train.

Given advances in real-time information, if Westfield were clever, they’d provide a screen with train departure info near the exit closest to the station, and another with bus departure information at the escalator down to the bus interchange. I’m sure they’d prefer people keep shopping than go and wait on a bench.

It’s a fair hike to the bus interchange, but most of the bus routes connect to the Frankston line at other stations. 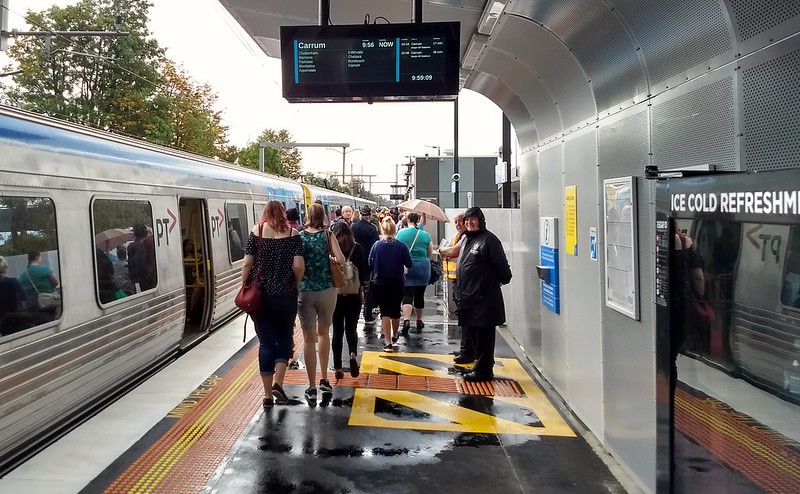 The Frankston line has trains every ten minutes, 7 days-a-week for much of the day.

(The longest lines have the highest 7-day frequency. Long lines = more stations = more people = need higher frequency trains to service them. But it would be good to see this spread to more lines to encourage train use).

So unlike the buses that serve Southland, there’s actually a good service on the busiest days, the weekends.

And the beauty of a new station like this is that, being halfway along the line, it can be heavily used but not cause crowding issues for peak hour trains, as most of the demand will be off-peak and counter-peak, and not hit crowding hotspots closer to the city. 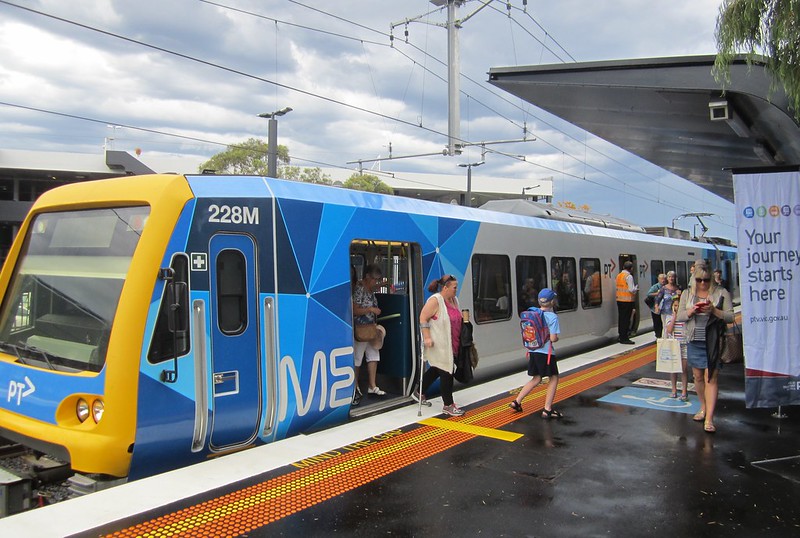 The opening of the station has made public transport a lot more competitive with car travel.

Timed from any of the stations along the line, it’s faster to get to Southland by train than by car — except Moorabbin, which is the same. This is thanks to the direct route of the train.

Train users have to get to the station. But motorists will have to find a car park (particularly tricky/time-consuming on weekends). 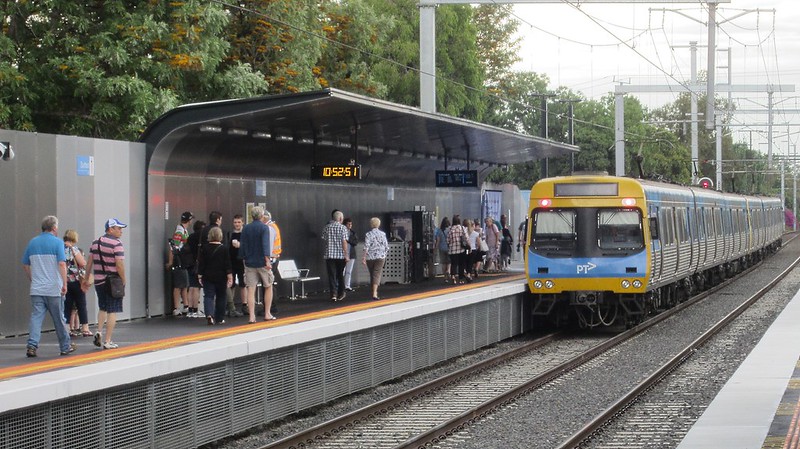 For people along the Frankston line, opening of the station has probably cut the trip to Southland by public transport by about 15 minutes, and made the journey much easier and more intuitive.

Of course people don’t live in railway stations. But in many suburbs there is increasing housing immediately around the stations. Upgrades like this, which make trips more viable without a car, over time will help encourage more people to get around without driving.

Even for me, about ten minutes walk from the station, it’s competitive, especially on weekends when the traffic around the centre is horrible.

It’s taken a while, but it’s great the station is open.

I had a lot less grey hair when Southland station first became compelling back in 1999 when the shops west of the highway first opened. Glad to see it finally open! pic.twitter.com/geFLwvTIqt

PS: Update 7:15pm. Perhaps the most unexpected reaction to the station opening:

28 thoughts on “8 minutes to Southland”