Five years ago I published some figures on V/Line’s peak patronage, based on their capacity reports, where they show the number of seats occupied in each service in peak hour.

Here’s an update comparing with their figures for February 2017. 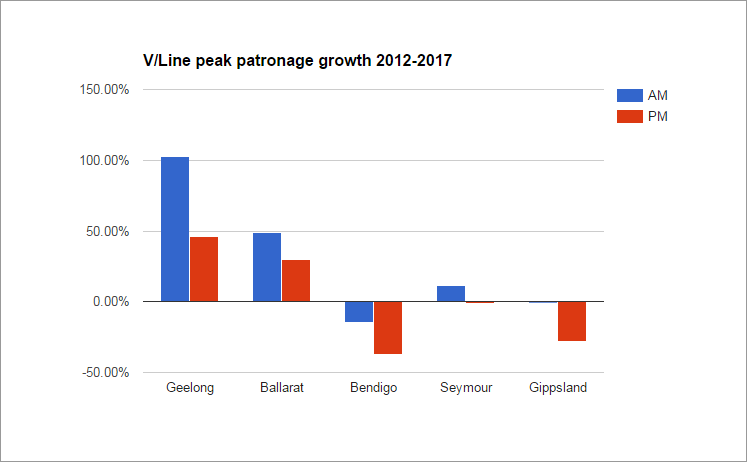 Apologies for the emojis; this blog format is not well-suited to wide tables. The face means it’s measuring the number of passengers. (Yeah they’re not smiling.)

AM peak is all trains arriving in Melbourne before 9am; PM peak is all trains leaving between 4pm and 6pm. And note that the maximum load quoted by V/Line is 100% — if a train has all seats filled and passengers standing, it is under-represented in these figures.

Why is AM peak higher than PM peak? Because it covers a wider span of time. A number of people would travel into Melbourne in AM peak, but travel back either before or after the PM peak, and those numbers aren’t published by V/Line.

Overall, clearly there is a lot of growth (41% in AM peak, 11% in PM peak), but this is focused on some lines far more than others, partly reflecting the changes on the V/Line network since then.

The biggest change in this time is that the Regional Rail Link project was completed, giving trains from Ballarat, Bendigo and Geelong their own tracks through suburban Melbourne. It’s not perfect, and V/Line’s operations on the line leave a lot to be desired, but it has opened up the way to far more trains and passengers. 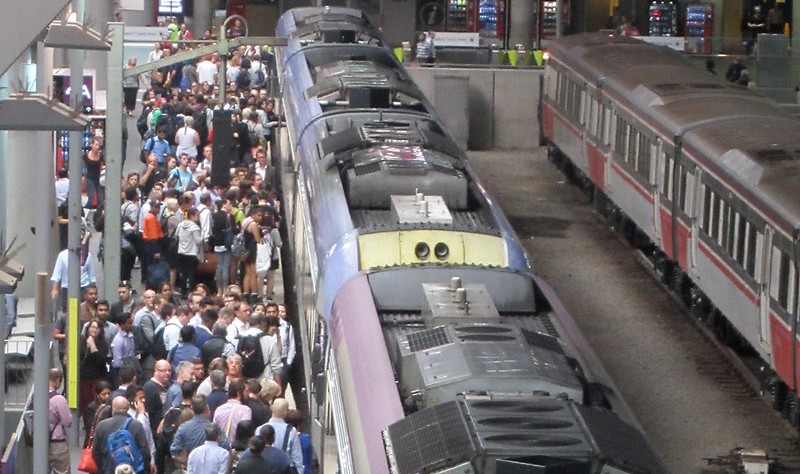 The Geelong line has seen the biggest growth, with a 53% increase in the number of train services, but a massive jump of passengers of 103% in AM peak, and 46% in PM peak. A big factor is that the line now serves the new stations at Wyndham Vale and Tarneit (the latter being the busiest V/Line station apart from Southern Cross) as well as Deer Park.

The irony is that having fixed the problem of large numbers of suburban commuters on the Bendigo line (see below), Regional Rail Link re-created the same issue on the Geelong line. There are proposals to extend Metro services to Wyndham Vale and Tarneit, but don’t hold your breath on that.

The Ballarat line is also showing strong growth, with 49% more passengers in AM peak, 30% in PM peak. Caroline Springs opening in January would have contributed, but I suspect there’s far more growth at the existing stations of Melton and Bacchus Marsh, as well as Deer Park, which are all growth areas.

(Sorry, I don’t seem to have the detailed figures from 2012 for the Geelong line handy.)

Over on the Bendigo line, patronage has actually dropped, as has the number of trains. Why? Because the Sunbury electrification opened in November 2012, taking a lot of passengers from one of the Bendigo line’s busiest stations to Metro services — the definitions for peak are different, but it’s about 1500 people from Sunbury, and about 180 from Diggers Rest.

While passengers at Sunbury still have the choice of boarding V/Line trains, they only run about once an hour, even in peak, compared to a Metro train about every 12 minutes, and the travel time is much the same, with no fiddly changing trains if you want one of the Loop stations or Flinders Street.

With the limited figures available in public, it’s difficult to determine how much Sunbury patronage has grown since electrification, but I’d expect the rest of the Bendigo hasn’t lost any other passengers overall, and has probably grown.

The Seymour line seems to have seen moderate change, with 11% growth in the AM peak, and a very slight decrease in PM peak. I’m surprised there hasn’t been a bit more growth thanks to the price cut in 2015 — $4.10 one way is dirt cheap to get all the way out to Wallan or Heathcote Junction, but there might be other factors — some stations might have no or very poor connecting buses, a hostile environment for walking and cycling, and a full car park. As always, the fare is only part of the equation — service quality matters more.

Gippsland line patronage is stagnant in the mornings, and well down in the evenings. This is probably due to a lot of Pakenham passengers having shifted to Metro — of the three PM peak services, two are marked as Pick Up only at Pakenham (this changed since 2012), and one runs express — all designed to ensure seats are saved for those travelling longer distances. 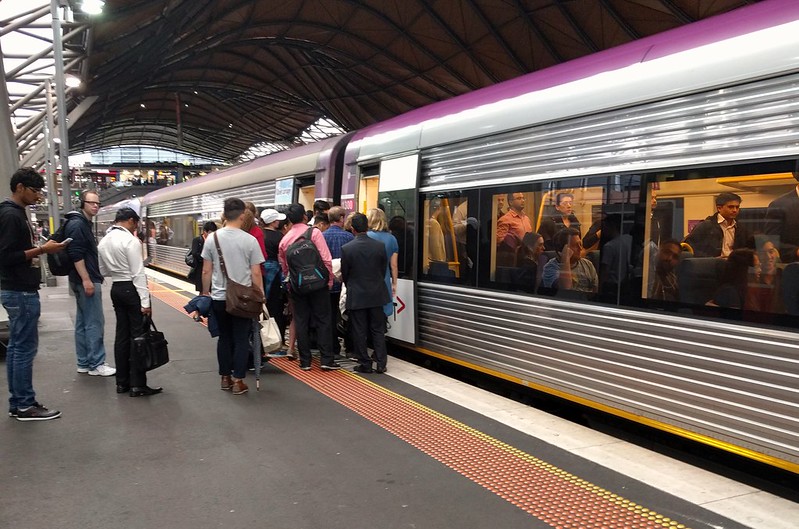 Investment in public transport usually goes where the crowding is. It might be some time before we see major infrastructure changes on the Seymour or Gippsland lines, though there are proposals to duplicate and upgrade the latter to counter the job losses in the Latrobe Valley by providing better access to employment in Melbourne.

The Ballarat line is being duplicated to handle more trains, and cut reliability problems, which is good. Hopefully the Bendigo line is coping for now. It’s unclear what will happen with the Geelong line in the short term, but clearly V/Line and the government need to deal with the growth that’s occurring across the network.