Here’s my monthly post of photos from ten years ago.

For a while I was waging war on ghost tram route numbers via this blog post and then this Age article.

Numbers like 7 and 9 were pointless because nobody outside a few gunzels knew them. This was tram route 7 to Malvern Depot.

In 2011, all the obscure route numbers got renumbered to something people can actually understand.

Route 7 followed route 6 as far as Malvern Depot, so today it would be called a 6d. 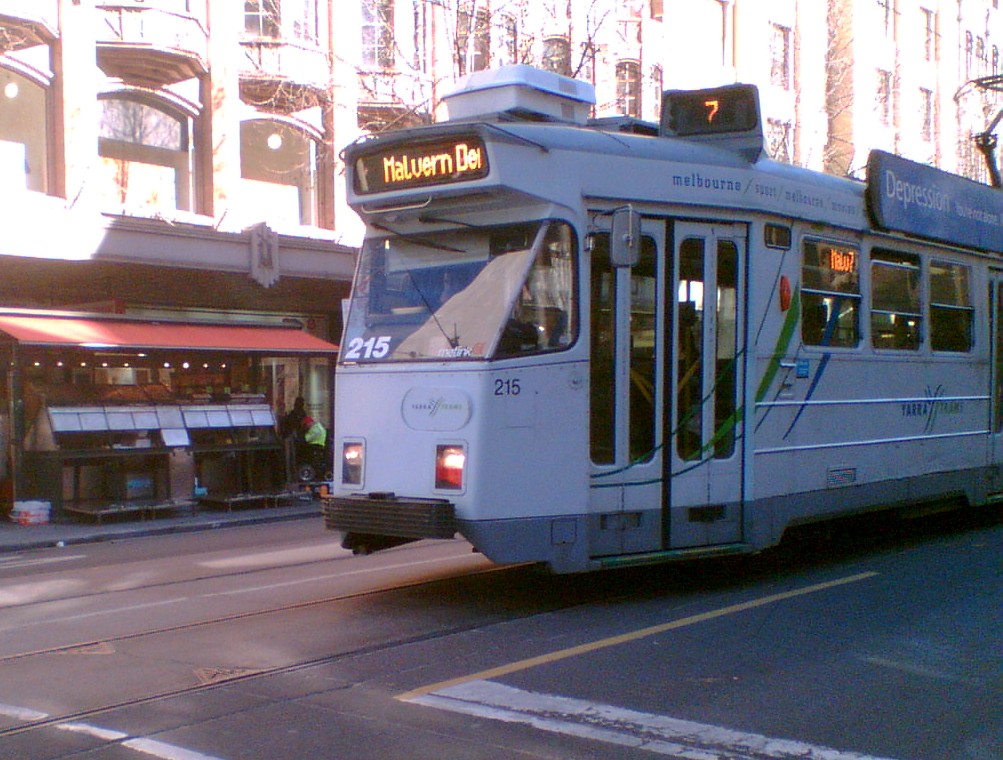 Here’s route 9 to Thornbury. Today I guess this would now be an 11d. 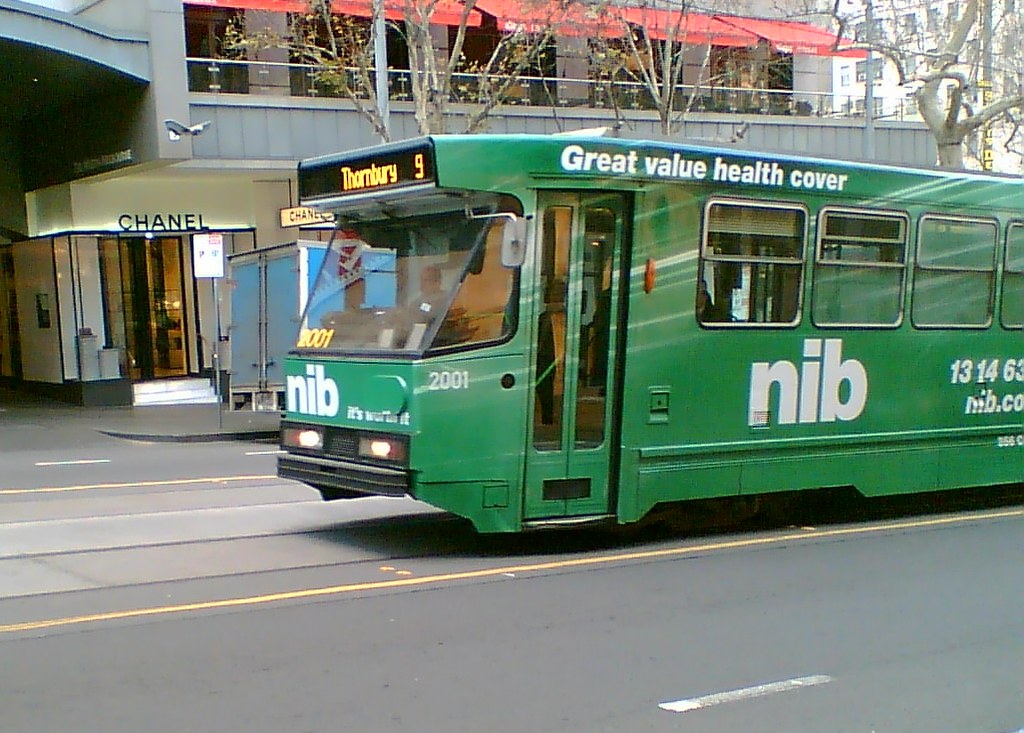 Banksy’s “Little Diver” had appeared in 2003 just off Flinders Lane. The building’s owners put some perspex in an effort to protect it, but it was subsequently destroyed a few months after this photo was taken. 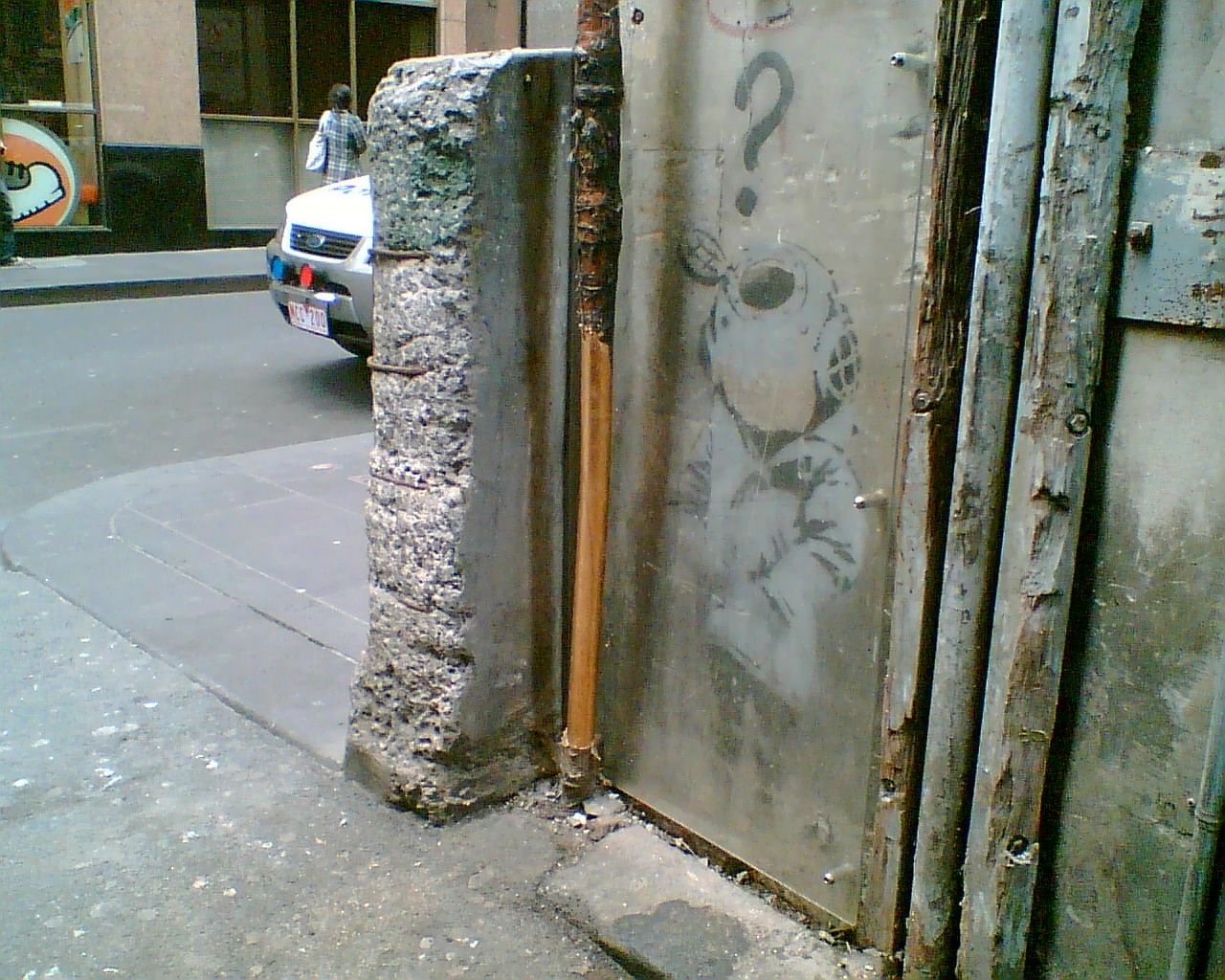 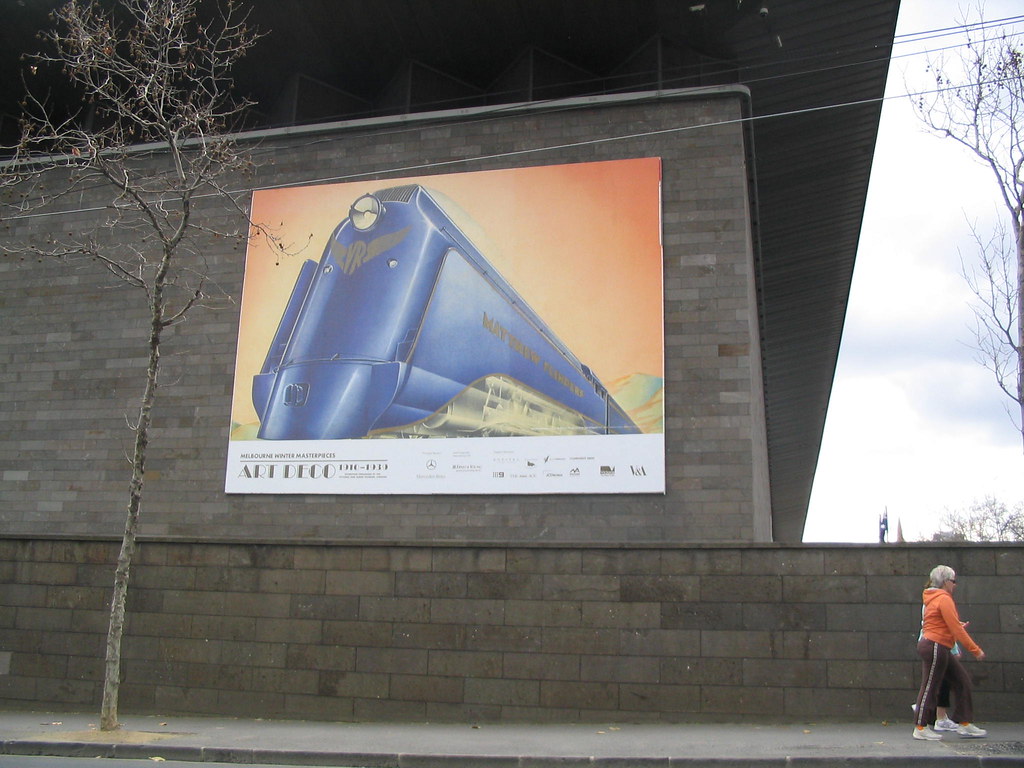 Bentleigh station: Some kind of work in preparation for Myki equipment installation. Note the mounting poles. The system eventually got switched-on in Melbourne at the very end of 2009. 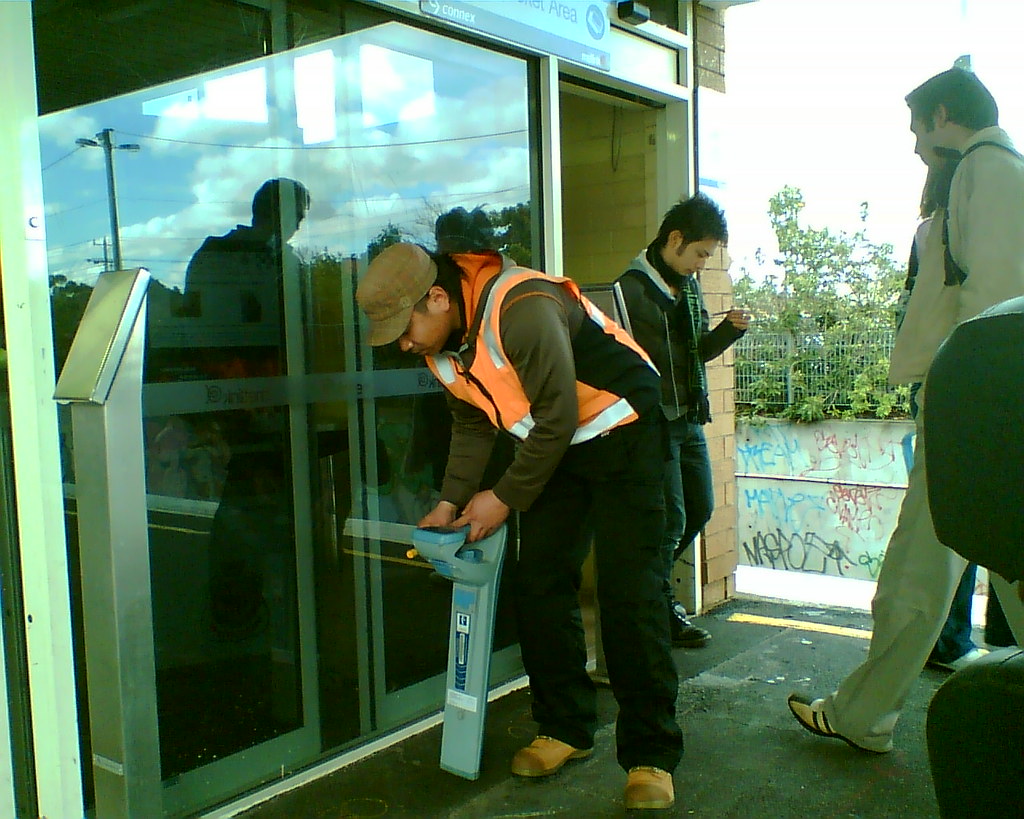 Back on the trams, this holding siding had just been built on St Kilda Road. At first, some drivers seemed not to slow down sufficiently, so the trams would lurch in and out of the points. Hopefully they’ve improved since then. 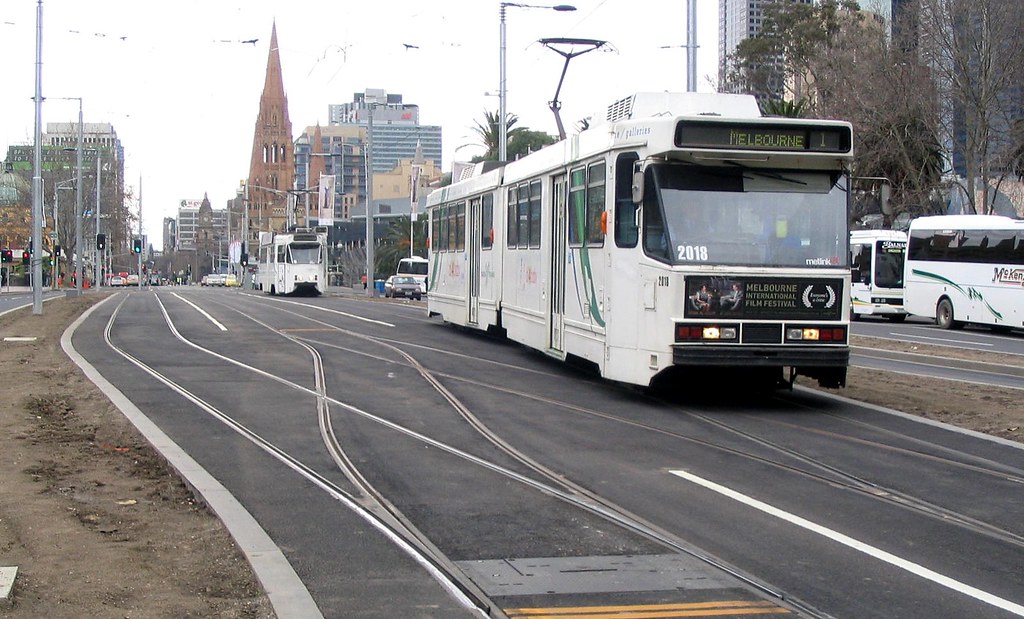 The same project included this triple track at the corner of Southbank Boulevard, allowing route 1 trams (turning right) to wait for their traffic light without delaying other trams. (Perhaps a cheaper option would have been to fix the traffic light so none of the trams got delayed?) 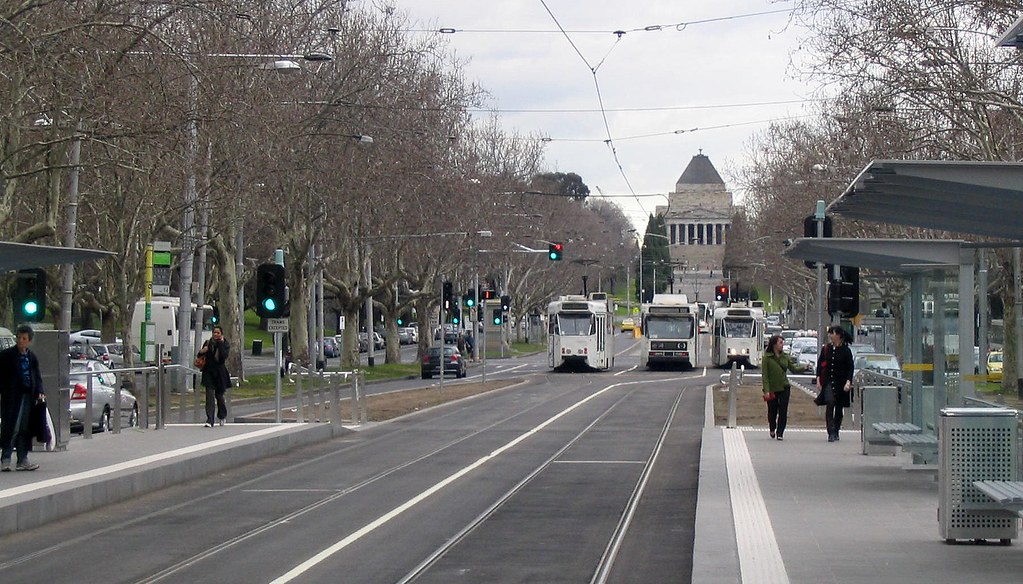 In August 2008 I got my “new” (2000-model) car. First order of the day was to put a PTUA sticker on it, something I did last month with the brand new car that replaced it. 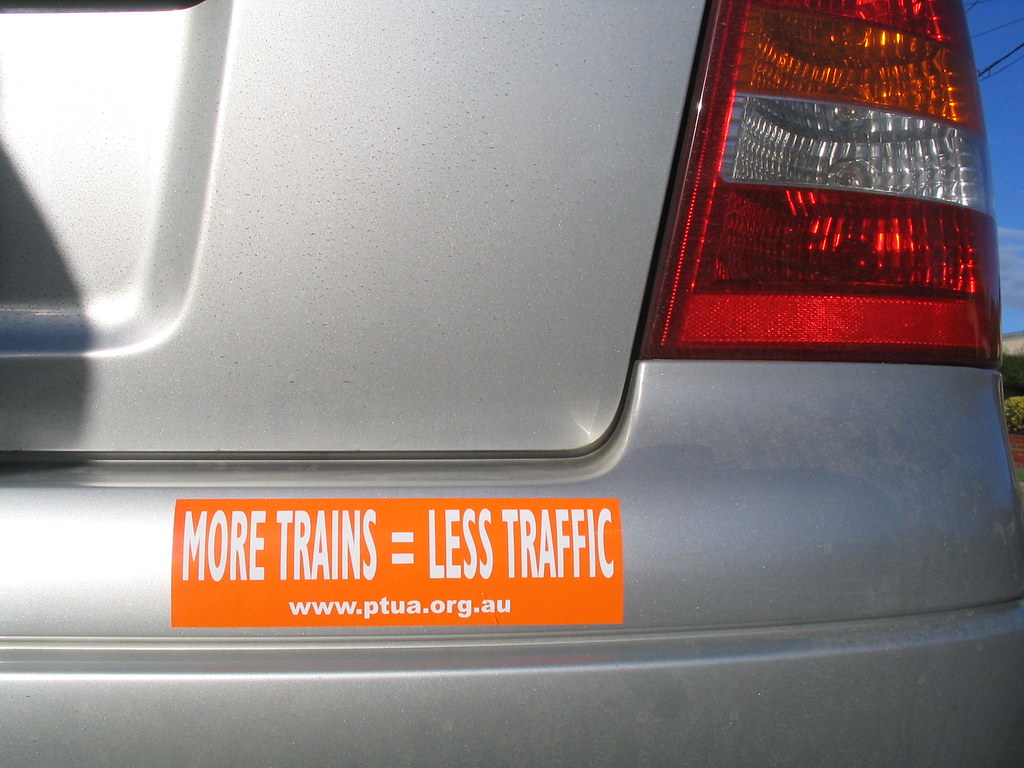 Back in December 2007, we’d gone to Spamalot, the musical. From this photo, it seems I subsequently found a can of Spam commemorating the show, though according to Wikipedia it had closed back in April.

Your “ten years ago” posts are always surprising since most things seemed to have occurred only a few years ago.
Such as Spamalot which we enjoyed. But it had a relatively short run in Melbourne.

I do believe the “secret” tram numbers still appear on the Tram Tracker app. Or at least did until quite recently.

Speaking of odd tram behaviour, a few months ago I was on a 72 tram that was due to return to the depot. Nothing unusual there, except we turned right from Malvern Rd onto Glenferrie Rd, where we were requested to swap directly (i.e. through the centre of the road, doors of both trams aligned correctly) onto another tram already waiting on the track opposite, which then turned right back onto Malvern Rd to continue our journey. Wondered how common this maneuver is.

I’ve seen tram drivers do that. Tram departs the terminus on time, meets the late tram on the way, and they swap drivers!

The oddest thing I still see trams do today is (especially near depots), a tram gong one direction would stop in parallel with another one going the other way to transfer passengers through the facing doors in the middle. It happens with similar trams but one turning into the depot and one leaving.

The 9 was originally the cut down (to the High St, Dundas St, Miller St and Plenty Rd) version of East Preston tram route (14), which was made peak only at some point after electric trams were put along High St Thornbury/Northcote and through to Burke St in the city in the mid-1950s (to replace the buses that replaced the last cable tram routes in 1940) and later cut entirely. The 14 probably would have survived if there had the 1923 M&MTB plan for the High St tram to continue along High St to Reservoir had been implemented and/or there was a station at Miller St on the Thomastown/Lalor/Epping/South Morrang/Mernda line for an efficient inter-modal interchange (with the Thornbury station at Normanby Avenue (providing an interchange with the 510) and possibly no Croxton station).