Myki has arrived in Melbourne. Kind of.

The government announced yesterday it is now valid for travel on trains only, so if that’s the third of the PT system that you use, and you never get on a tram or bus, you can use it.

I gave it a spin yesterday afternoon. Here’s what happened.

In summary? The travel worked, but I was unable to put any more money onto the card, on two separate machines.

Melbourne has had multi-modal ticketing for more than 25 years. The simplicity of it is the envy of cities that don’t have this. One ticket on tram, train and bus. But not with Myki. At least not yet.

Of course, if you’re desperate to use it anyway, you can’t actually go and buy a Myki card and play with it today — unless you want a trip to a regional city first. You have to order online, and it’ll take about a week to show up.

Once you have the card, you can travel by train on it.

Because apparently it’s all working on the train system. All tickety-boo. And nothing to do with the impending self-imposed deadline of the end of the year that the government set themselves.

“I have received advice from the Transport Ticketing Authority board that test data shows that myki is consistently reliable across Melbourne’s train network and they have therefore recommended the commencement of myki on the metropolitan rail network.”
— Government press release

Trying out Myki on day one

So I tried it, with the kids trailing along with their Metcards, since they don’t yet have Mykis.

I moseyed down to my local station with my Myki (bought in Geelong) in hand.

I know from looking at the web site that the balance is getting a little low. Maybe I’ll put some more money on it.

Bentleigh Station only has one Myki vending machine so far, on platform 3. That’s because the plum spots near the main entrance (platforms 1+2) are taken by Metcard machines. Later on they’ll take those out and put in Myki machines. So, I head for the machine on platform 3 to top-up my Myki card. 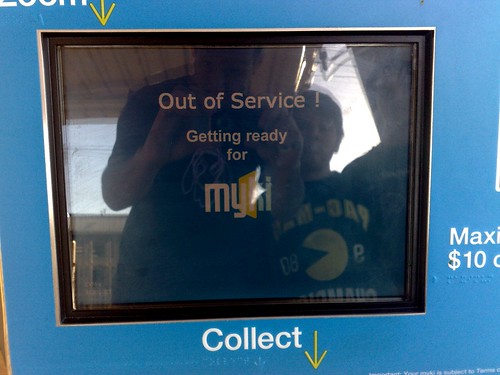 Strike one! The machine is out of service. It has in fact been out of service for at least a week and a half now, despite me flagging it a week ago via a contact at the Transport Ticketing Authority.

No matter. I have $4 something on the card. Enough for a trip.

Touch on, touch off

Over to the main platforms. Touch-on with the card. It works. Slowly — about 2 seconds, not the 1 second response time claimed.

While waiting for the train I try the blue (Myki Check) machine, which can show me the card status and history. All looks okay.

Train arrives. One stop to Patterson. Off the train. Touch-off. Again, about 2 seconds.

The Patterson station Myki vending machine appears to be functioning. So I put the card on the reader and try to lighten my pocket by topping-up the card with some silver.

The machine prompts me to insert the coins, but no. Not one coin will go in. I look closely at the slot. The lock thingy that prevents nefarious characters inserting unwanted objects is closed. It won’t take my coins. Strike two!

So I try topping-up by credit card. It prompts me to insert my credit card into the slot, then to look at the EFTPOS section of the machine for further prompts. It doesn’t ask for a PIN, but instead instructs me to remove the card again. I do so. The machine then thinks about it for a good 30 seconds or more, before finally reporting “Sorry, your transaction could not be completed.” 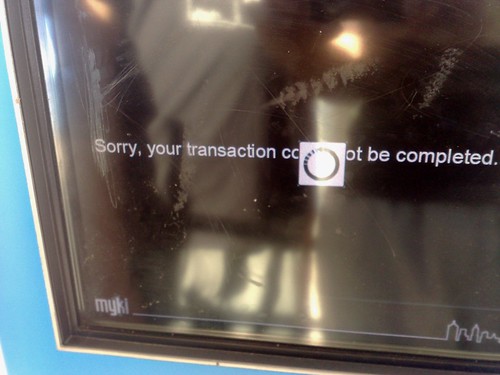 It’s not really ready, not even on trains

“I have received advice from the Transport Ticketing Authority board that test data shows that myki is consistently reliable across Melbourne’s train network and they have therefore recommended the commencement of myki on the metropolitan rail network.”
— Government press release

I’m sorry Minister, but I beg to differ. If I have been unable to top-up my card at two separate locations (and remember, during the first stage of rollout, any station staff you might encounter have no ability to help with this), that means passengers at these two stations can’t pay for their train fares. This system is not ready, not even for trains.

Sure, you can top-up online or via the call centre, (it’s 13 MYKI, in case anybody needs to know).

As it happens, I tried an online topup. The first time, it returned an error, something along the lines of “No records found”, which made no sense. The second attempt worked, with the following cautionary note:

When topping up your myki via the website or the myki call centre, please allow up to 24 hours for the funds to transfer to your myki.

Up to 24 hours means the ability to top-up instantly while travelling is important.

Now, I know some people will want to get a card and try it out (especially since they’re free for now). But it’s really hard to recommend it to anybody for regular travel who isn’t looking for trouble.

Maybe the answer is to order one online, and tuck it away somewhere and keep using Metcards for now until Myki is fully functioning.

The simple truth is the government has rushed this thing to the table while it’s still half-baked. After foolishly having promised it by the end of the year, they’ve switched only part of it on, but even that part doesn’t work properly.

They should have waited until it works.

Thursday update: I took another ride this morning.

While the vending machine at Bentleigh still hasn’t been fixed (despite it making the front page of The Age yesterday), the money deposited via the web site on Tuesday night had shown up on my card correctly.

At Glenhuntly, I successfully deposited a bunch of coins onto my card on one of the vending machines, and inspected my history. The other machine somehow couldn’t show me my history. I didn’t test the topup on it, but the coinslot wasn’t blocked like at Patterson on Tuesday.

Touch-on and touch-off worked okay, except that one scanner at Glenhuntly didn’t work until the third try (it twice said “please try again”). The system appeared to charge me the correct $2.94 zone 1 adult 2-hour fare.

Another trip this morning, this time Footscray to Bentleigh. Stopped off at Flinders St to see how the gates respond to the card. The answer is s..l..o..w..l..y… (at least on the first gate) but it did work. The hack job to get the Metcard gates to recognise Myki cards meant it flashed up a code which I don’t recall the exact wording for, but seemed to imply the Metcard barrier thought it was an employee pass. The second gate was faster.

“Myki is here” posters have started going up (noted at North Melbourne and Bentleigh, with the latter having other posters describing how Myki works). But the posters about it still being in testing are still up at other locations (such as Footscray) — potentially confusing.

The vending machine at Bentleigh has been fixed… almost. Topped up my card with cash. Tried with a credit card though… no go, it came back with an error saying it’s not taking cards.

50 thoughts on “Myki has arrived”