I finally bought a new car

Apologies for the following long ramble about buying a car.

The costs of cars (Do I even need one?)

My prolonged hunt for a new (used) car got me thinking about how much they have cost me… and how long I’ve kept them.

So basically, the two cars I’ve had have depreciated by about $1100 per year.

What other costs? Insurance roughly $400 per year (though it used to be higher when I was younger). Rego about $800 (this is rising, not reducing).

Maintenance and repairs? So far since the start of 2017 I’ve spent about $1600. This is probably going up as the car gets older, so let’s guess an average of $600 per year.

So in a year, costs of about $3400, over double the cost of my annual Myki fare.

With average annual car travel of about 6300 kms (which is under half the Australian average, by the way) that’s about 54 cents per kilometre.

My usual driving pattern is that I use the car on the weekends, but rarely during the week. Mostly those weekend drives are around the suburbs, but a few times a year it’ll be a longer trip to visit relatives in the country.

What if I didn’t own my own car?

The only car share scheme in my area that I know of is Car Next Door – vehicles cost about $20-30 per day plus about 33 cents per kilometre.

Based on my annual kilometres, that works out to be roughly 20% more than paying to own my own vehicle. If my weekend drives were occasional, it’d probably be cheaper, but not if driving a bit almost every weekend.

Of course if using car share, you’re likely to make more of your trips using other modes. Countering that: my sons are about to learn to drive, so demand for a vehicle may go up a bit.

So for now, I’m thinking I need to continue owning a car, at least until PT is so good that the PTUA has no purpose!

What I want in a car

So I got to shopping. What did I want?

What would fit the bill?

Apart from HowSafeIsYourCar, you can also peruse the full MUARC report, though it’s a bit hard to read: 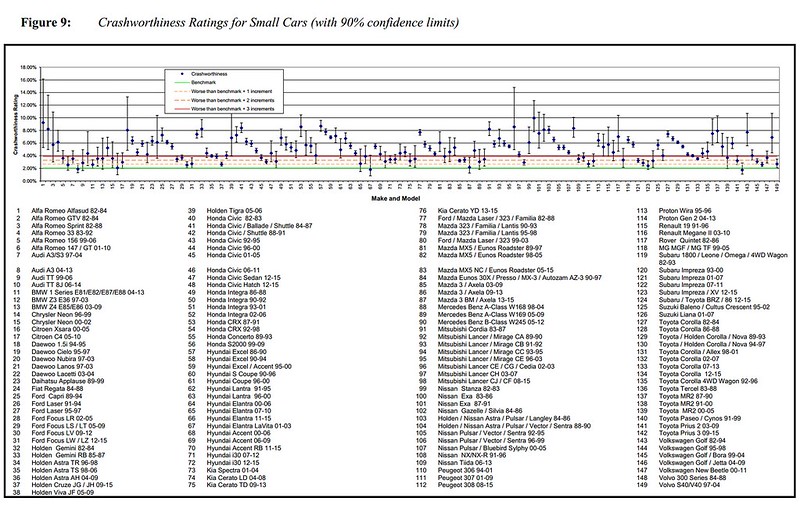 Working out the costs of motoring, above, especially the real costs of purchase back in the day, and the money lost in depreciation, made me feel a lot better about shopping for a car in the $15,000 range, to get something as new as possible, and of course with a 5-star ANCAP rating.

After talking to relatives, I concluded that everybody likes the car they drive. Stepfather likes Subaru; sister likes her Mazda 3; cousin likes his Mitsubishi Lancer. (All Japanese brands. Hmm.)

After noting the high safety rating, I did start looking at Subaru Impreza for a while, but there aren’t that many of them about for sale, and you have to spend well over twenty grand to get an almost new model with those nice indicators on mirrors and daytime running lights. Not that they’re essential by any means.

I was also a little nervous about reviews which remarked that Subarus can be a little fussy on maintenance. Which means to minimise risk it’d be a pricey dealer service every time.

So, back to the Carsales web site to do some more searching and researching. (By the way, the Carsales mobile web site lets you search for specific feature in a car, such as Cruise Control. I can’t see that feature on the desktop/standard web site.)

I just bought a new car

While out for a walk the other morning, looking at various cars I saw along the way, I wondered:

Considering I spent over $19,000 (in 2018 dollars) on my first car, back when I had relatively little money, what about upping the budget a bit so I could stop compromising so much and get everything on my list?

I am lucky enough that I can (just) afford to do this.

I like the size and the style (though I could do without the “bum enhancement”).

So in the first four years, potentially a saving of around $2000. And given how much I hate buying cars, I can keep a brand new car for longer.

Suddenly buying a discounted demo car at about $18K seems not a bad proposition compared to a used car at $15K, so I went and test drove it. I quite liked it. It seems odd that the Lancer is being discontinued (and not replaced) at the end of 2018.

Anyway, I decided to go for it. Although it was a demo car, the dealer said it’s actually brand new, sitting in a holding yard somewhere until it can be delivered.

Trade-in? Worth almost nothing, unfortunately, a couple of hundred dollars. But I knew that going in, so at least I wasn’t disappointed.

But we did that little haggle dance around the final “changeover” price, and I did manage to get a bit of a discount, and floor mats thrown in.

The main guy handed me over to a lady who organised payment and delivery, and also offered some extra options like tinting, paint protection… They made the mistake of giving me a minute or two to Google and find this Choice article: Useless car extras revealed, leading me to opt out of those.

It arrives in about two weeks.

Hopefully by the time I’m done with it in a decade or more, electric cars will be plentiful and cheap, and/or public transport will be at a standard where I don’t need to drive regularly on the weekend.

PS: This crash test between a 1998 Corolla and a 2015 Corolla shows the value of newer cars with improved safety features:

…That said, it’s notable that older cars often have poor safety ratings now, but did well in ANCAP tests at the time. They don’t have the 1998 Corolla ANCAP results still available, but the 2009 model scored 5/5 at the time, but only rates 2/5 now based on accident statistics.

22 thoughts on “I finally bought a new car”