While my most pressing home renovation need is the bathroom (planning to do this the next time my sons are away on a trip), I was also thinking:

Governments should be doing a lot more on climate change, but what are the major emissions in my home, and how could I decarbonise?

The car. I recently bought a petrol car, because given how little I drive, I couldn’t justify the cost of hybrid or electric, and with brown coal power generation, electric cars arguably just move emissions from the tailpipe to elsewhere. Hopefully by the time this car is replaced, most electricity (certainly in my house) will be green and electric vehicles will be more affordable. So let’s leave the car aside just for the moment.

In the house itself, several of the appliances involved are quite old and inefficient, and may need replacing anyway in coming years. So there’s an opportunity to move away from gas (unavoidably fossil fuel) to electricity (which can be renewable).

Gas central heating — this system is more than 20 years old, and not very efficient by modern standards. Maintenance also seems to be increasing.

Current thinking seems to be that split system air-conditioners are more efficient than has central heating, particularly from electricity from renewable sources.

There’s a cost there of course — each area of the house would need a new unit fitted. I got one for the main living area a year ago for cooling, which is the other obvious benefit of installing them.

Good insulation also helps. I’ve done the roof, and we have external blinds for summer, as well as ceiling fans, but wall insulation is worth doing too. 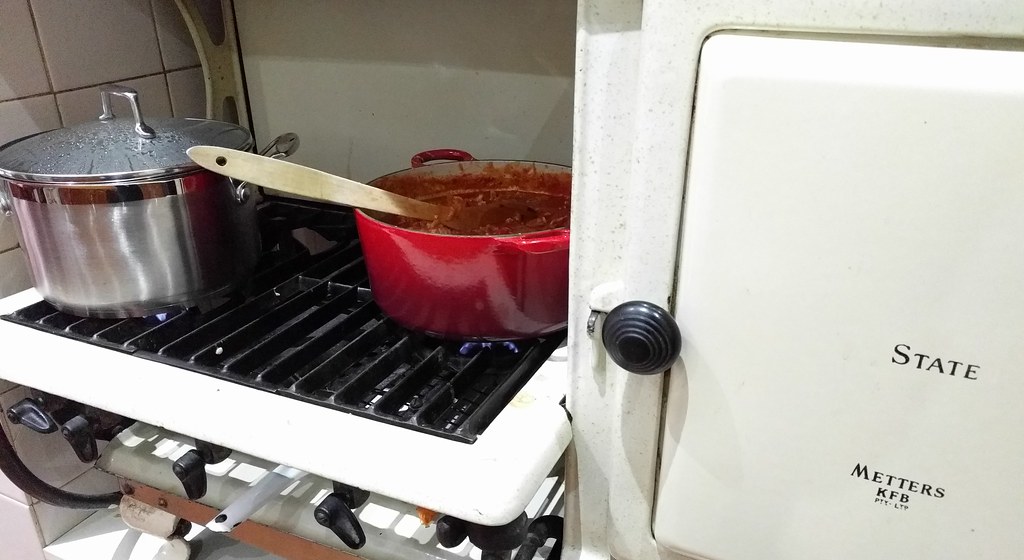 Gas cooking — my ancient gas cooker still works around 90 years after it was installed. It’s got minor problems though with gas leakage, and both the oven and cooktop are small and lack precision. We’ve learnt to live with this, but modern facilities would be nice – for instance an oven that’s big enough to cook multiple pizzas.

Replacing these with electric could be the way to go. Electric cooktops can be induction or ceramic — I like the sound of induction, though that may require replacing some of my cookware.

Gas water heater — ten years ago I got solar hot water with a gas booster. It’s worked well, though a bloke who came recently to clean the panel mentioned that parts are likely to need replacing before too long — perhaps in the next five years.

Options might include a conventional electric hot water heater (expensive to run) or a heat pump, which can be expensive to install (up to about $3000), but are apparently quite cheap to run. Though come to think about it, I think I paid about $4000 for the solar hot water system. 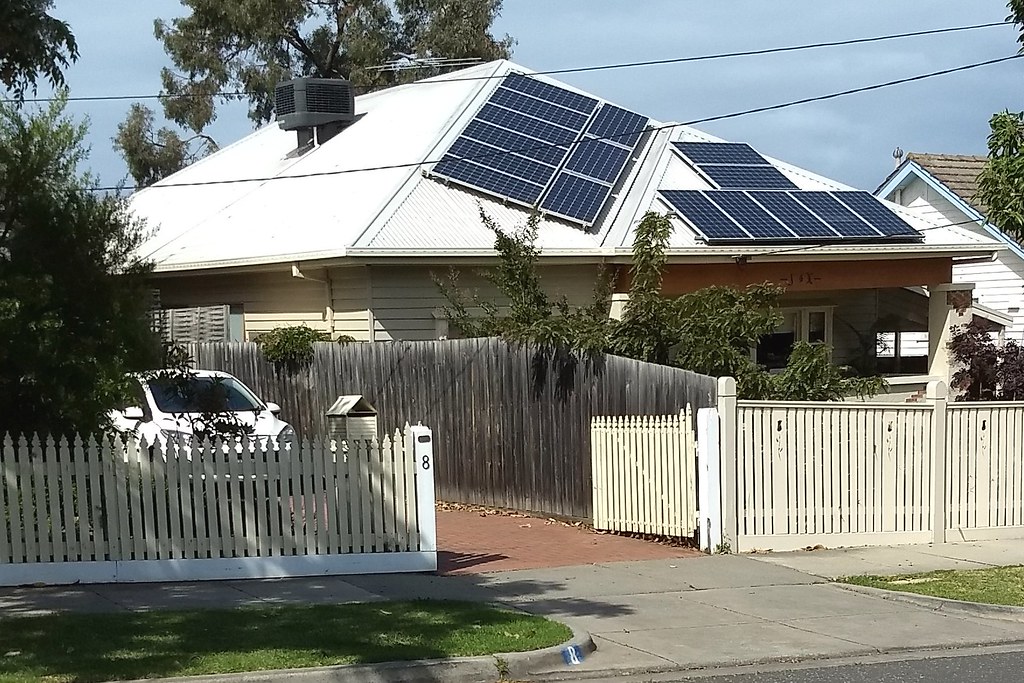 Electricity — currently I pay for green power, but an obvious upgrade would be to invest in PV panels, which have dropped in price markedly, and the new subsidies make it more affordable, even if the feedback tariff isn’t very high anymore.

One benefit of removing the solar hot water would be making more space on my relatively small roof for more PV panels. Some owners of houses with a small roof have been quite creative about maximising the number of panels – see photo above.

There are also different options for PV panels, which some expensive ones generate more power — and of course one can install batteries to make use of the power generated rather than feeding it back into the grid (typically during the day) and having to buy it back at peak times (typically in the evenings). Batteries are really expensive though, well over $10,000 it seems.

Can rooftop solar generate enough power at the hottest part of the day to run air-conditioning?

I also need to keep in mind future development around me. My neighbours on the western side have rebuilt their house as two storeys, reducing sun onto the roof in the afternoon. If the same happened on the eastern side I wouldn’t be surprised — there’s been a lot of similar development in my street.

Put all these things together, and (for a cost) I could move off gas completely, and move most of my power generation to solar, cutting my household emissions to hopefully near zero.

I’m sure I’m not the only one pondering these issues. What are other people doing?

14 replies on “Decarbonising my home”

Rooftop solar will generate enough to power the air conditioner on hot days. If you have about 4 kW of panels, you will make nearly that much on most sunny summer days, and your air conditioner (assuming you use only one) will use about 3 kW at full blast unless it’s huge.

I’d keep the solar hot water panels though. They will re-heat the tank of water in less than a day during hot weather, and this will be faster than a heat pump. I haven’t done the maths, but they should be more efficient than turning sunlight into electricity and then using it (slowly) to run a heat pump to put equivalent heat into the water. My solar hot water is still running well nearly 15 years after I bought it. I had to replace the original fittings at the panels because they broke, but they were poorly constructed plastic of some sort. The manufacturer stopped using them soon after making my system, and now sells brass fittings, which of course haven’t burst since I bought them. I’m waiting for the pump to fail but it still hasn’t yet.

I am amazed at your old stove. When we renovated our kitchen a couple of years ago we looked at induction cooking and I can’t remember the exact details, whether we would have to have three phase wiring installed, but certainly there would have been some expensive electrical work to do. At least modern gas stoves use gas much more efficiently. With an electric oven, the amount of gas used by the stove top could be paid for with gold coins. Our owners’ corporation doesn’t even bother separately charging for gas as stove hotplates are the only private gas used in the building.

A friend with a 5kW solar system had a battery installed for about $10,000 and it works well. His action was not to help the environment, but lock down mentality for when we get these massive power blackouts this summer. Well, it was forecast by some but I am not sure what it was based on.

Solar hot water systems are ridiculously expensive. And unlike almost any other appliance, they have not come down in cost at all, compared to other appliances which came down after the end of protection for Australian manufacturing ( which is a whole other argument ).

The last time I tried to get a solar hot water heater, the pinheads in local government had been told that gas creates slightly less CO2 than coal, so gas was the way to go. As a result, a lot of people got gas fired ( not solar ) hot water, just in time for the huge gas price increases. The council insisted that I get a gas boosted solar, even though I had no gas to the property, no gas appliances and no intention of getting any. I was not allowed to get electric-boosted solar. The costs of getting gas were too high, so I replaced the really old electric off-peak with a new electric off-peak. Might be time for solar, when that one wears out.

The catch with using solar for air conditioning, is that the sun goes down.

If you need to run your airconditioning in the evening, it will come from the grid.

On the other hand, If you manage to keep the house cool during the middle of the day, you might not need the airconditioning in the evening. It all depends on the weather, the thermal mass of your house, the insulation, the ventilation, and whether your walls are still copping direct sunlight in the early evening in summer. Also depends on whether you are at home in the daytime.

It actually requires less energy to cool your house down ( from hot ) around 6 PM, than it takes to keep it cool all day.

Because, if you try to keep it cool all day, then there will be a temperature difference between inside and outside, so heat will flow in, which will have to be pumped out again.

But if the house is matching the outside temperature all day, then that heat isn’t flowing in, so it doesn’t have to be pumped out again.

Putting this another way, you only have to pump the heat out once, if you don’t turn on the aircon until you get home from work.

Andrew, you have to pay quite a lot extra for the isolation required to be allowed to use your own battery electricity during a blackout ( load shedding blackout or storm related blackout – any kind of blackout ).

I thought the Govt was looking at planning controls to ensure that solar rooftop panels weren’t overshadowed by new development. Which is a great idea, but they probably should’ve moved on this sooner.
As for heating, I’ve read that electric panels are the way to go, with separate controls for each room so you can close off unused rooms. Gas for heating is definitely out (and like you we too have an aged gas heating system, it’s ducted and is most inefficient and we pay a bomb each winter to use it). Forget hydronic heating too because with electric panels, there’s no water to be heated and pumped around the house.

If you’re going for aircon for the house it’d be a lot more efficient to get a ducted system installed using only one compressor rather than paying for a split system for each room.

Yes, solar can easily run air conditioning during the middle of the day. By heat pump magic, a 5kW split system actually only uses about 1kW of input power, whether cooling or heating.

Electric panels can never be the best way to heat a house because all they do is take a watt of electricity and produce a watt of heat from it. A heat pump will always make more efficient use of electricity than that.

The cost of solar hot water systems is ridiculous, it’s true. But the components do seem to last decades, so the companies can only make their money once from each customer. With gas units, they get to sell another one every 10 years or so.

There is an issue that the ABC 730 Report broadcast on 8 Nov 2018. Well over 240 volts being sent to houses and damaging appliances:

Your gas-boosted hot water system is probably continuous flow? (heats up the water on demand) If so, going to a heat pump system may mean not being able to have 3 showers in a row without the hot water running out!

If you’re looking for practical advice, I’d recommend One Step Off the Grid.

[…] Improving my house’s heating and cooling and energy efficiency is an ongoing project. […]