(To just see transport-related blog posts, you can use this link — which is also on the top navigation menu)

Partly it was the cost, partly it was that I really wanted to pursue passive cooling as much as I could — measures that used little or no energy.

To that end, three rooms have ceiling fans, three more have standing fans. The three rooms with the biggest windows have external blinds.

And there’s insulation in the roof. (I haven’t yet explored options for wall insulation or double-glazing, which I suppose I should, especially given it’s a weatherboard house.)

All this helps the house stay cool… to an extent. It’s much cooler than outside on the really hot days, and much better than it used to be, but it still gets up to an uncomfortable 30ish degrees indoors on 35+ days.

This summer I’ve decided to bite the bullet and get an air-conditioner, which will cool the livingroom and adjacent areas. 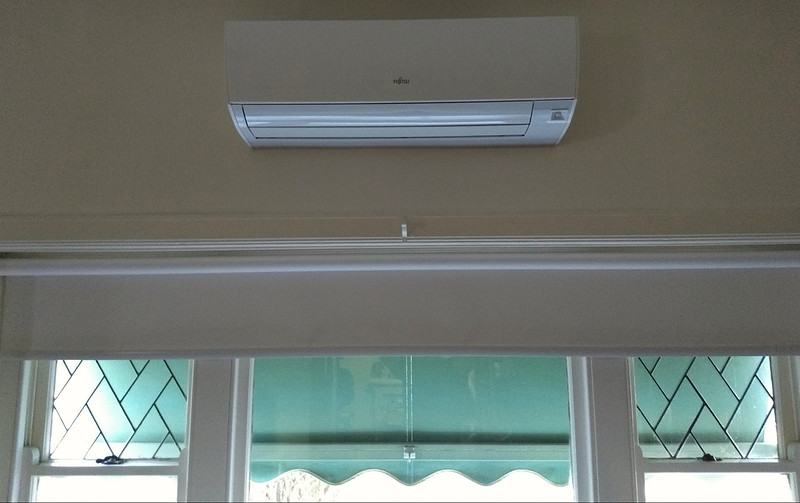 Part of what got me over the line was that I finally found an air-conditioning company willing to publish useful information for prospective buyers, rather than making you ring them up and have the sales pitch blasted at you. Thanks Current Force Electrics.

For ages I’d been looking for a rough indication of how much it might cost, and no other company’s web site publishes that type of information. It’s like window shopping but there’s no prices in the window. I don’t know about you, but it puts me off.

Current Force also have useful information helping you work out capacity you need for a particular space, and they clearly explain some of the types of installations, with regard to positioning the outdoor unit. They also do quotes by email, by getting you to send in photos of the space.

I’ve ended up with a 5 KW (cooling) / 6 KW (heating) Fujitsu model, which should be plenty of power for the space, given the other measures already in place.

They installed it on Thursday. It took about 90 minutes. Since then, the weather has been cool, but it’s expected to reach 36 degrees on Wednesday, so air-conditioning will make a big difference to the indoor temperature — and to my power bills, no doubt.

A future house upgrade might be solar power to help offset the additional power, if I can figure out where on my smallish roof it should go.

My sense is the fans are usually adequate at night — in fact I’m going to get the ceiling fan from the livingroom moved into a bedroom.

But one argument for fitting out the bedrooms with split system units that can both cool and heat is to phase-out use of my old gas central heating in the winter — doing this job with green power (preferably roof-top solar) instead of gas is more energy efficient and environmentally-friendly, and quite possibly cheaper as well.

11 replies on “I finally got air-con”

Assuming you turn it off at night, with the house nice and cool, you might find the bedrooms are cool enough with just the overhead fans, which is pretty well how it works for us.

Will be interested to see how much your power bill increases.
BTW, I always thought that gas was more energy efficient and environmentally-friendly than electricity, mainly because of all the brown coal needed for generation. Or is your comment about phasing out gas heating in relation to using solar-powered electricity?

The difficulty for me is the type of heating. I don’t like forced-air heating. I want to use hydronic heating, and I do, but the water needs to be about 70-75 degrees in radiator panels or it doesn’t work. Gas can do that, but heat pumps can’t. It would take a two-stage heat pump, which is theoretically possible but is not yet domestically available.

Hydronic through a heated slab can certainly run from an electric heat pump, but it’s not easily retro-fitted to a house.

When the weather is humid but not necessarily hot you can run the A/C on a “dry” setting which will dehumidify the air and only cool it slightly. This uses less power than the heating or cooling mode.This will make it much more comfortable inside. In my apartment I run a dehumidifier to keep the humidity down and to dry my laundry if it is raining or cold outside. This unit will easily keep out the chill during winter and you may only need your gas heating to “help” if it is really cold outside. You might be able to just run the fan on your gas heating unit to circulate the heat or cooling from the A/C unit through the ducts you already have to the other rooms in your house if it is not too hot or cold outside that it would exceed the unit’s capacity. The fan in the gas heater by itself uses very little power. If you don’t already have a fan switch on your thermostat a heating tech or electrician can add one for you. Double glazing really helps. Since I rent I ordered 3M window insulating kits from the US to install on my windows. It is a bit like clingfilm which is attached with double sided tape and then shrunk tight with a hair dryer. You may like a product like Stop Noise which attaches a layer of plexiglass to your existing windows and makes them double glazed without the cost or hassle of replacing your windows.

@Philip, you can get heat pump hydronics now, but it’s a limited supplier pool in Australia right now.
Try the “My efficient Electric Home” group on facebook, it comes up there a lot.

After some careful consideration a few years back, I settled for evap cooling. Taking advantage of the fact that Melbourne has a relatively dry climate and that I live in a free-standing house with its own roof, I thought this was the best compromise option. Most hot days, it goes well, consuming up to 1300W at maximum setting to cool the whole house, and have brought down the temperature by 15 degrees Celsius. Still pretty warm, but not too bad if I position myself close to the vents. I try to start it long before the day gets warm so that the inside of the house stays cool for longer.

The downside is that it doesn’t work as well on hot humid days, but that’s a rarity in Melbourne. In that case, I will run it in fan mode.

Aircon costs me around 50 cents a day to run for around 5 hours a day in the evening when I’m home. And this is in the hotest Sydney suburb. Uses that mainly in the first hour. Once the apartment is cool it uses very little power to keep it that way. I have mine set to 24° Each deg you go down adds a considerable amount. I find 24° is plenty comfortable

Get an efficient air con (heat pump), use it for a few days in summer, and use it all winter long to heat your house with free renewable heat collected from the air outside your home.

My article published on the Conversation – “Hot summer nights and cold winter evenings – How to be comfortable and save money all year long.

[…] — each area of the house would need a new unit fitted. I got one for the main living area a year ago for cooling, which is the other obvious benefit of installing […]

[…] Air-conditioning (a backwards step for energy efficiency, but a giant leap for comfort on very hot […]

I removed a log fire and installed a ducted reverse cycle air conditioning system. Every 2 months I save$100.00 in heating costs. I would recommend the installation of reverse cycle either split system or ducted. I also installed 6 kW of solar panels to help with running costs