PT crowding increasing – but we can do better

The May 2018 Metro and Yarra Trams passenger load surveys were released last week.

It’s worth noting that load surveys are measuring what happens when the service is running as planned. It’s not designed to look at crowding during disruptions, it’s designed to guide future investment.

Here’s the TL;DR for Metro: After a reduction in the past couple of years, crowding is on the rise again. 9.8% of AM services are above the threshold, and 4.8% of PM services.

To me, this indicates that patronage has kept increasing, and the reduction in crowding in 2017 was thanks to the removal of some seats to increase standing space. Unfortunately on some lines there hasn’t been a huge number of new services added to the peak timetable in some years — only 5 across the networkwide AM peak between May 2015 and May 2018 according to the graph. 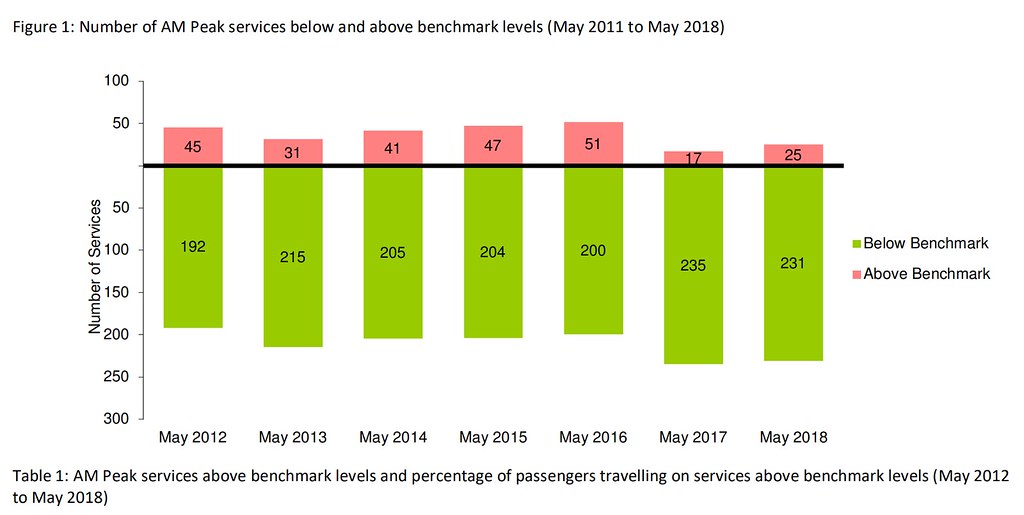 Here’s a summary of the state of the lines. Rather than use the figures concerning the number of trains that are overcrowded, I’ve pulled out the percentage of peak passengers travelling on overcrowded trains:

Basically, crowding on the lines serving the growth areas of Melbourne (especially Sunbury, Dandenong, Werribee and South Morang/Mernda) can be expected to worsen over coming years if nothing is done.

Also worth noting: the focus is on peak hours, but there are now real problems outside peak hours, including weekends. Some lines run as little as every 40 minutes on Sunday mornings, and are packed. This should be an easy win to fix, but seems to be a blind spot for the government.

The load survey notes say that counts are actually done between 6am and midday, and 2pm and 7pm. It’d be interesting to see the data from the middle of the day, when some lines see a big service frequency reduction. 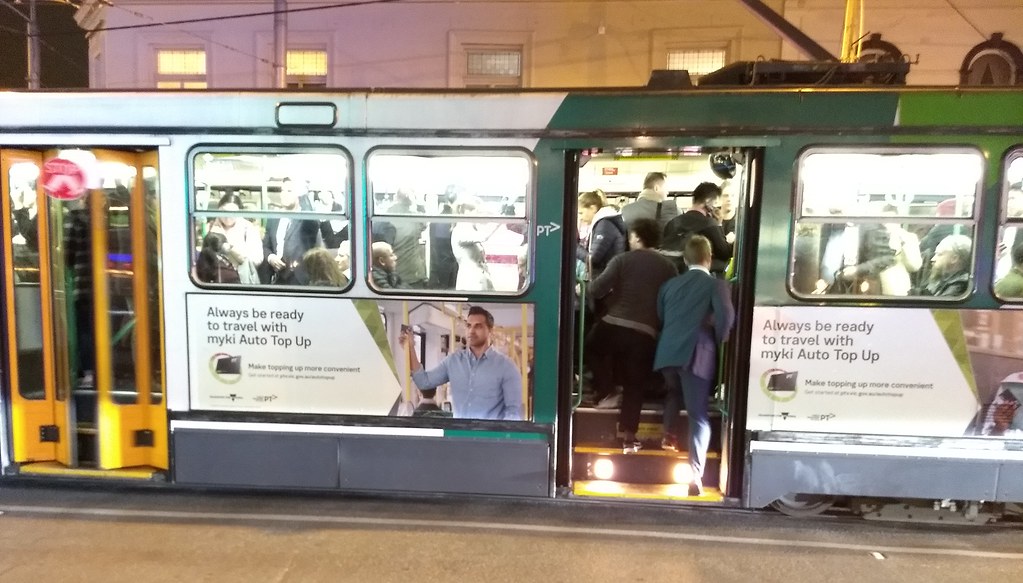 Other hotspots in the AM peak include Wellington Parade (routes 48/75 — I’m betting mostly the 48, which usually uses small trams), and on Clarendon Street (route 12, another with small trams).

And there’s a twist: for the first time, they measured a “non-cordon” (eg non-CBD) location: route 82 at Droop Street and Ballarat Road — and found that too is overcrowded in the AM peak.

Perhaps this should be no surprise: despite huge urban renewal around Maribyrnong, this route is one of the least frequent in Melbourne (only every 15 minutes in peak) and runs all small trams. 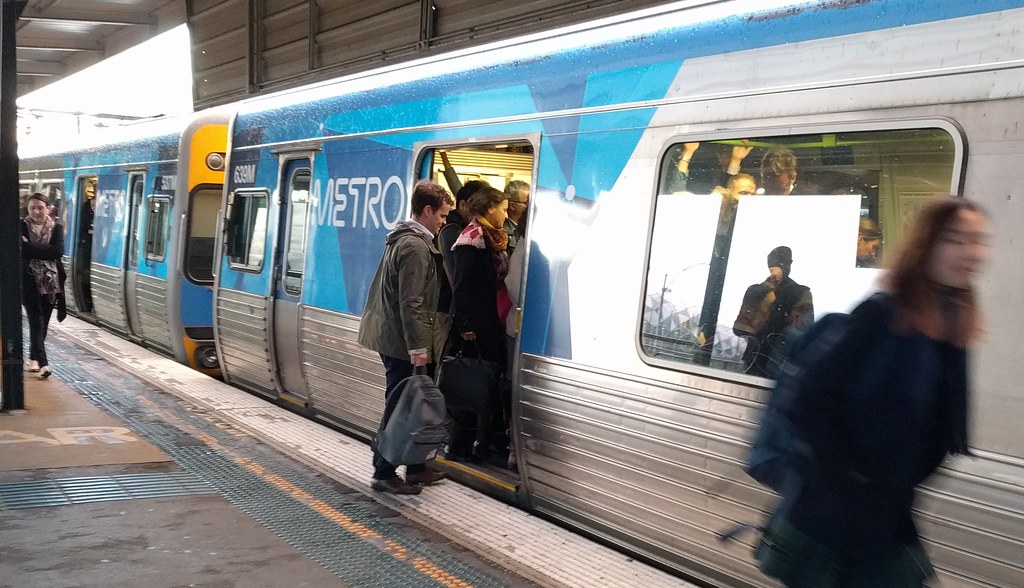 One can understand where the debate about population and decentralisation is coming from – prompting talk of (among other things) fast rail to the regions.

But if decentralisation just means fewer people moving into Melbourne (which at least has some semblance of a public transport network) and more moving into regional areas (many of which really don’t have any public transport, apart from a small number of buses and trains) then that’s not a good outcome. It just means more car dependence and sprawl in towns around the state.

Plus our local decision makers haven’t yet learnt that big cities can and do deal with congestion… just not by building more motorways. They can’t necessarily eliminate congestion, but they can ensure that more people can get around without being caught in it, by providing alternatives to driving.

You can argue that public transport in Melbourne and Sydney isn’t coping with our growing population.

But it’s incorrect to claim it can’t cope… because we haven’t really tried.

None of this is good enough in a city of 5 million people and growing. 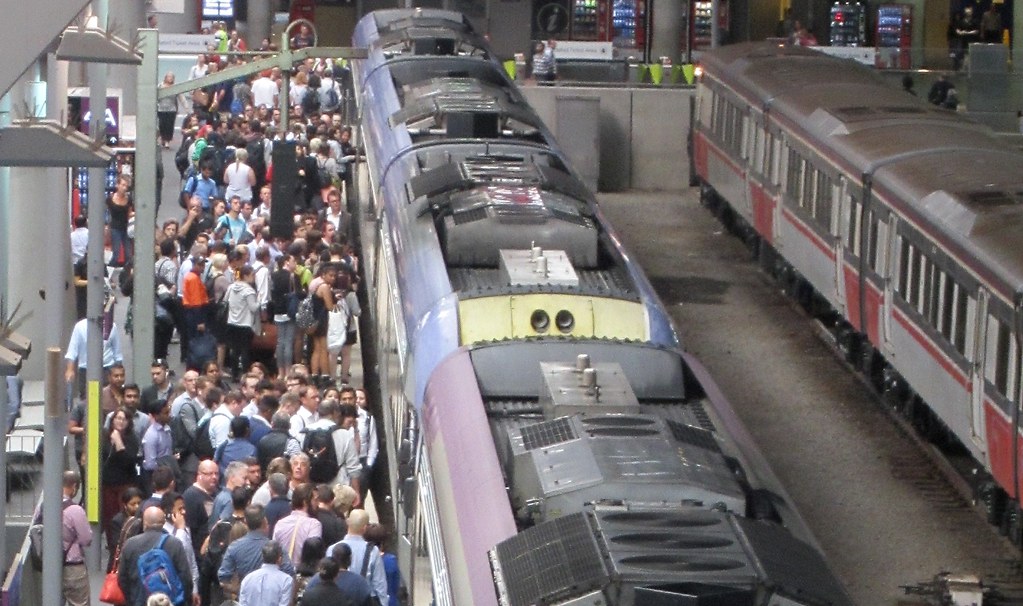 While successive Victorian governments haven’t really tried in a serious way to fund high frequency high capacity public transport, they’ve tried everything they can to get the motorways to cater for growth.

It doesn’t work. Ultimately, moving millions of people around in their own metal boxes simply doesn’t work… which is why the smartest big cities have fewer motorways than we do.

The time has come for proper, turn-up-and-go, big city public transport. Our government must do better.

14 thoughts on “PT crowding increasing – but we can do better”