High-frequency trains (all day, every day) are critical for any big city, to ensure large numbers of people can get around quickly and easily.

As a PTUA study found some years ago, Melbourne is one of the few big world cities that doesn’t have them. To draw an analogy, it’s as if outside peak hour, we closed the freeways and highways except for one lane in each direction.

To delve into hyperbole for a moment: it’s the tyranny of infrequent services on so-called trunk routes. Those in power are basically saying: if you choose to use public transport, your time is not important. We’d prefer you drove.

But there is a rollout plan for ten minute trains. 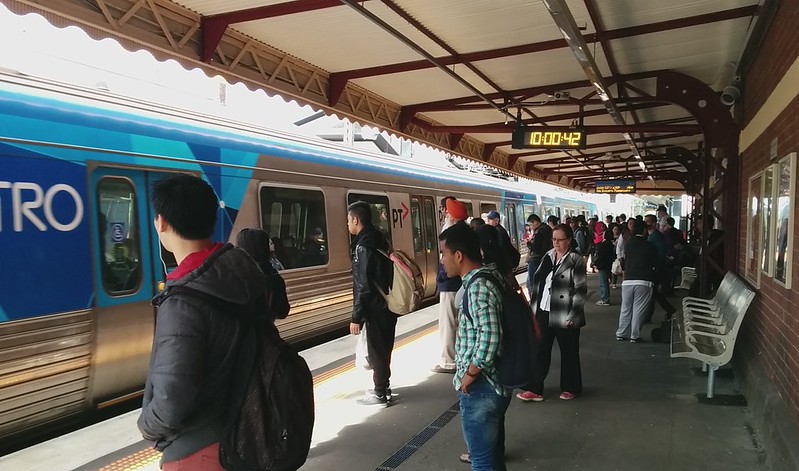 This week the Coalition announced that as part of a package of transport upgrades that include extending the South Morang line to Mernda, the line would also go to every 10 minutes off-peak on weekdays from October 2015.

Notably the service upgrade is costed at only $20 million (it’s unclear for how long, but often these recurrent figures are given in terms of 4 year budget cycles).

This underscores that higher all-day frequencies, which make public transport much more easy to use, don’t have to cost that much money. We have a big train fleet and plenty of track capacity to cope with extra services outside peak hour. The costs are largely in drivers and power, though it also adds to pressure on maintenance facility capacity, which is why this is being slowly expanded.

PTV, which was established by the Coalition government to manage and plan the network, actually has a plan to gradually roll out ten minute services across most of the rail network — it’s part of their “Network Development Plan – Metropolitan Rail” (which I blogged about here). The process started with the longer (thus busier) lines a few years ago, and while it’s not ideal that progress is driven by politicians rather than transport planners, I suppose that’s the reality — so in a way it’s good that the importance of high frequency all-day services is recognised at the political level.

I’ve summarised the rollout (past, and proposed) of ten minute services (and new lines) below.

Unfortunately PTV has almost totally failed to promote the existing ten minute services (despite them and the government promoting many far less useful improvements to trains), but anecdotally at least patronage does seem to be increasing — it’s not unusual on Saturday mornings to see a few standees on Frankston line trains inbound, which in the past few years have doubled in frequency and length, thus quadrupling capacity.

The question is… when will the politicians grasp how beneficial high frequency trains are, and fund the PTV rollout plan — not just a line at a time, but for the whole network?

Looks like we are almost there. At least in respect to inner sections of the network.

Trams have always been at a standard frequency of 12 minutes and trains at 20. My understanding is that most tram routes are now 6 to 8 minutes all day on most routes?

Your table also shows the Alamein line as dropping in off-peak frequency from every 15 minute to every 20.

Great table Daniel, thanks. But what about services after 10 pm? Can’t we do better than 30 minute frequencies? Although I see that the Sandringham line gets a 20 minute service for some reason.

@Tom, yeah I guess the issue there is that you can either co-ordinate the Alamein trains with their connections at Camberwell, or leave them as 15 minutes. 10 might be stretching the current infrastructure, and also might be over-servicing what is a very quiet line (though the question then becomes why some stations aren’t deserving of higher frequencies to cut waiting times, even if they aren’t needed for capacity).

@gxh, yeah I didn’t want to complicate the table too much by including evening services. The PTV eventually has those running every 10 minutes as well, but as a transitional step going to 20 minutes.

Sandringham has had 20 minute evening services since the 1990s. It was part of an early-90s experiment to increase services to see if it resulted in more patronage. It did, but the followup to expand this to new lines has only happened at a snail’s pace.

Do they have a time for duplicating the single track between Gowrie and Upfield? Until that’s done it will never get better than 15 minute frequency in peak hour let alone otherwise on that line. And that 15 minutes is pretty optimistic, they struggle with 20 minutes now (skipping, cancelling etc).

Daniel, where is it set out that in the ultimate services will operate at 10min frequencies in the evening? Is that in the NDP? I can’t recall having seen that detail.

The plan is to duplicate from Gowrie not just to Upfield but to Roxborough Park and then build a flyover to allow further extension to Wallan and divert the V-Line trains via the Upfield line.

Re: the oddity of Sunbury trains going back to 20 minutes from 10 minute frequency in Stage 3, I’d think it’s because the Sunbury + Airport Line would combine to provide a 10-minute frequency from Albion inward. Unless I’m mistaken, the Airport line is proposed to use regular Metro rollingstock with a usual stopping-all-stations pattern, through-running to the south-eastern suburbs. Preferably it’d act more like an express service Airport-Sunshine-Footscray-Southern Cross, with specialised rollingstock, though I don’t think that’s the plan.

The single tracks on some part of the network will probably be an issue with making trains run every ten minutes. On Belgrave line there is a single track for a lot of the distance past Ringwood, mostly in between stations which have multiple tracks. At Ferntree Gully where the multiple tracks from Boronia become a single out to Upper FTG, outbound trains often have to wait outside the station for a citybound train to arrive and leave as there’s only one outbound track. That’s just one example, I think a lot of track duplication would be needed on parts of the network to be physically able to run both outbound and citybound every ten minutes. (Belgrave also has Tecoma, the only one platform station, which is another difficulty).

I think there should be more 15’s in that table.

When is off-peak? Will evening services be improved? City to Ringwood is half hourly after 10pm weeknights according to the timetable, which is pretty poor. They’re often quite busy still as a result.

It’d be interesting to extend the table back through history; there’s a copy of the 1939 timetable online at Mark Bau’s site, which lists Mordialloc and Oakleigh as 20min (one to Frankston Saturdays, one to Dandenong weekdays) and Flinders St – Williamstown as 15min with one of those extended to the Pier.

[…] course, an all-day ten minute service is possible right now on much of the rail network, without a rail tunnel, and without fancy new signalling. It […]

[…] As I’ve said many times, ten minute services are possible on most of the rail network with the track infrastructure and fleet we already have. There are impacts for driver numbers and maintenance capacity, but the government should push ahead with it. […]