On Wednesday the Coalition announced a pledge to upgrade all the main regional rail lines to 200 km/h, cutting travel times.

Melbourne is bursting, we must take control of population growth by decentralising growth. The Liberal Nationals 200kmh high speed rail vision will enable this to happen. Every regional and country rail line, major upgrades. pic.twitter.com/Z4pznZMkMx

This is a really interesting policy. Given the ALP has pledged to investigate fast rail to Geelong, and is upgrading other lines, it’s great to see both sides talking about regional rail. 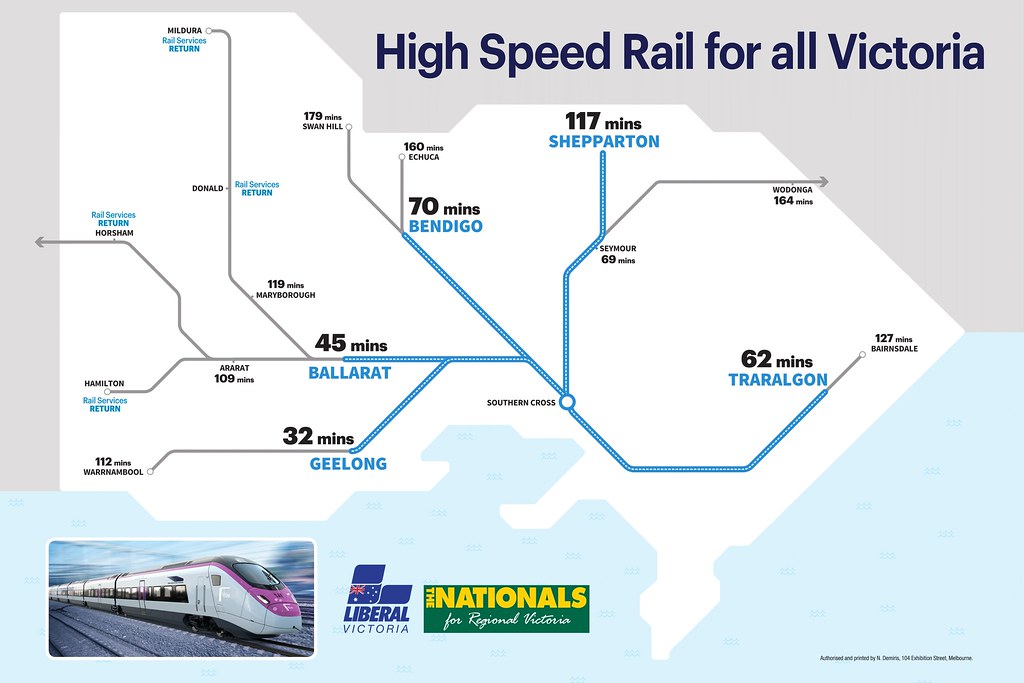 The talk from the Coalition is of “European-style” high speed rail. I’m not sure that analogy stacks up. The Europeans are running electrified trains at 250-320 km/h, not diesel trains at 200.

The plan is closer to the British main line railways with their large fleet of diesel-powered InterCity 125s (eg 125 mph = 200 km/h). However these were developed in the 1970s (with swing doors!) and many (but not all) are starting to be phased out as part of a huge upgrade, in favour of electric or bimodal trains on the main lines.

In fact in a lot of the world, high speed rail is not a term applied to trains that run at 200 km/h — this is known as “higher-speed rail“!

Apart from proposed running times, the Coalition are a little vague on details of a service plan. Perhaps fair enough not to get into too many specifics without some detailed planning, though it’d be good to have a rough idea of what they have in mind. The current mostly hourly off-peak service doesn’t cut it.

The plan does specify hourly trains between Colac and Bannockburn (I admit I had to look it up; it’s northwest of Geelong on the line to Ballarat), and from Waurn Ponds to Werribee. That would make for a combined frequency of half-hourly between Waurn Ponds and Geelong, alongside the main service to Melbourne.

This is a clever idea, with a lot of potential, though the Werribee service could be more frequent if it’s going to attract people out of cars along the Princes Highway.

A short term change flagged is more express trains between Geelong and Melbourne, to immediately cut travel times down to 50 minutes.

In fact, the 17:33 weekday departure out of Southern Cross already does this trip in 50 minutes, scheduled to arrive in Geelong at 18:23.

Running more trains at this speed is possible, but difficult. You’d need to change stopping patterns around to make way for the expresses, which could lead to long waits and crowding at intermediate stations.

It would also further complicate the timetable, which already has an incredible 16 different stopping patterns in just the morning inbound services before 10am. More consistency would help cut delays and even out train loads. 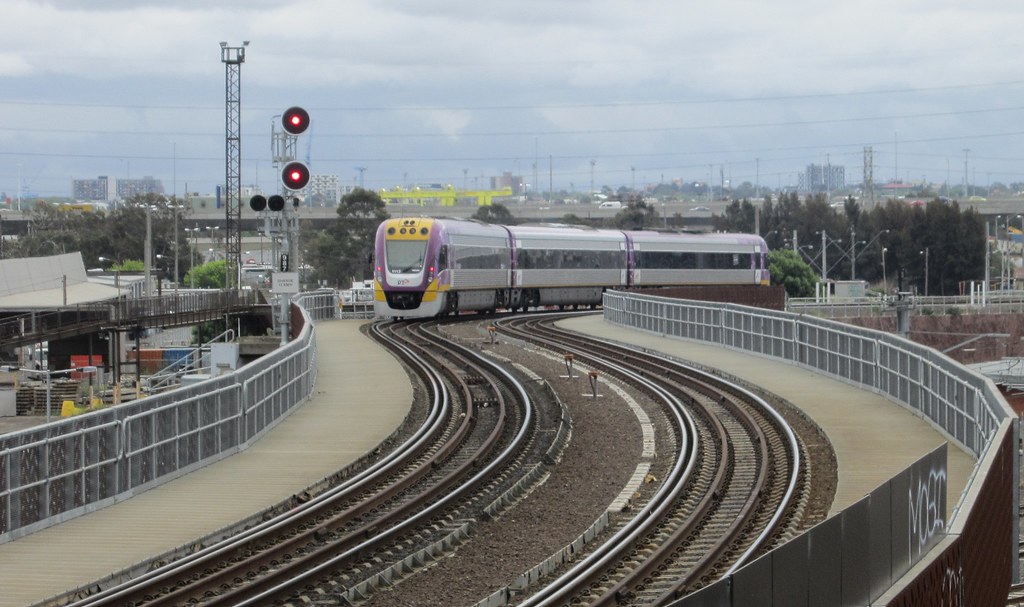 After my UK trip last year, I thought upgrades to get Victoria’s main lines to 200 km/h would be a great idea. After all, the Brits did it in the 1970s. How hard could it be? Turns out it’s difficult — you need a new fleet, the V/Locities can’t do it.

It would also be wise to remove most level crossings, though it may not be absolutely necessary to remove the quietest/low-risk crossings.

Of course you’d also need to straighten out the curves, and particularly from Gippsland, additional track through the suburban area would be needed to drastically cut travel times. (The Rail Futures Institute suggests an elevated route along the Princes Highway for V/Line and Metro express trains.)

So the next question is: if you’re going to spend tens of billions on new fleets and rebuilding track, shouldn’t you be aiming a little higher than 200, up from 160? What about 250 or 300? This would require total grade separation, but for the money, would make a bigger difference to speed.

Alternatively… it strikes me that in terms of bang per buck, if we’re not aiming for a top speed of well above 200, a better option would be to institute upgrades that help the V/Locity trains reach their full potential.

I’m betting all that would be a lot cheaper than $19 billion, and would bring huge benefits to overall travel times — in particular cutting delays and waiting times (especially to/from connecting services).

Amazingly, according to remarks in this video (go to 8 minutes in), the Coalition plan appears not to include full duplication of the Ballarat line, just “a slight extension of some of the passing loops on the western side of Bacchus Marsh”. This shows that — just as Labor did last decade with the disastrous singling of the Bendigo line — they’ve focused far more on speed and travel time, at the expense of frequency and reliability. 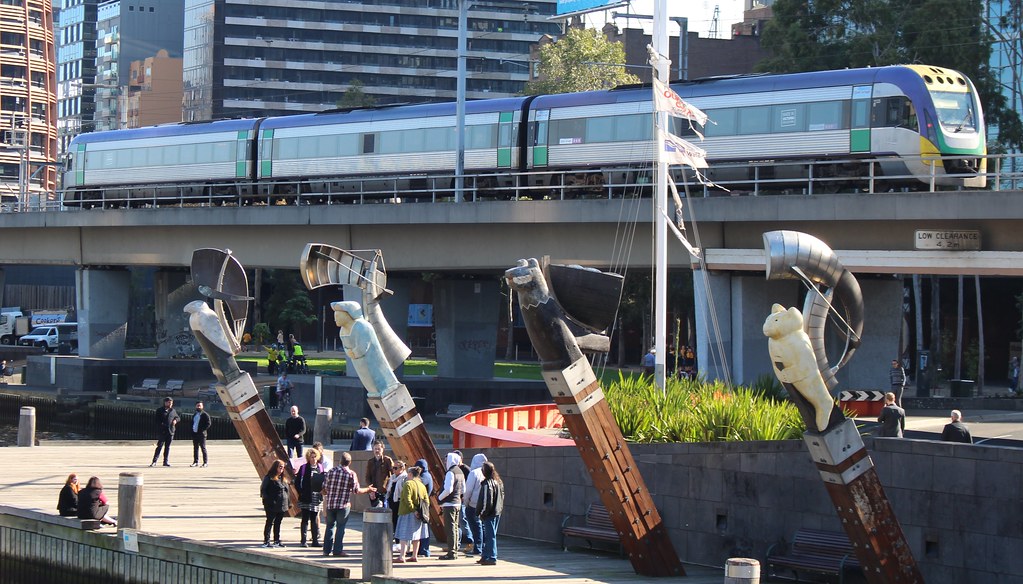 Predictably, Labor has savaged the Coalition’s proposal for its lack of detail.

It’s clearly a very ambitious plan: Geelong fully upgraded by 2022, the rest by 2028. Is it possible? There’s an awful lot of cynicism about it, but at least the Coalition is thinking big.

Driving the overall policy is the Coalition aim of help decentralise Victoria’s population, which makes a lot of sense.

I don’t have all the answers, but it’s a great discussion to have, and it’s terrific to see both sides being ambitious around public transport.