…documents obtained by the Greens through freedom of information reveal that the positive results did not include many trains that were affected by the knock-on effect of a cancelled or delayed service. Of the 437 trains surveyed, 113 were excluded.

You don’t hire scores of people to stand on platforms with clipboards to learn that cancellations are bad because they result in crowded trains, and we should avoid cancelling services. That is obvious.

Load surveys are for designing new timetables, to identify where and when extra trains should run. So while some may disagree, I think it’s perfectly sensible for them to exclude cancellations. To not do so would make it impossible to know where services should be added.

By all means they could publish the raw figures, or a version that does include cancellations, but for the primary purpose — service planning — they have to be excluded. 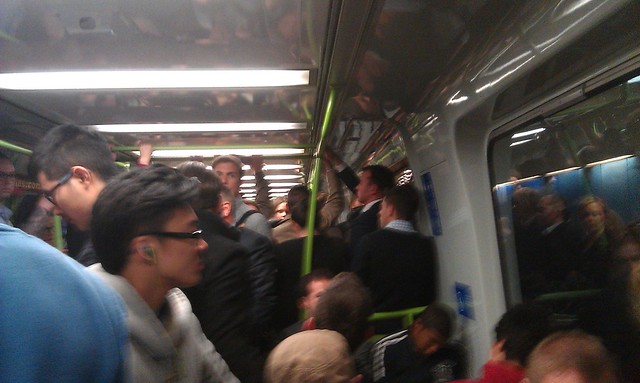 Including loading on a train after a cancelled service would corrupt the statistics. That there are so many cancelled services is of great concern. I heard that an early am train to Pakenham was cancelled this morning. Without checking the timetable, that sounds like there would be a one hour gap between services. I think I have heard that the same train was cancelled a week or so ago. That is disgraceful.

Agree in principle that loads following a cancelled train should be excluded from average load statistics – but in reality, the data including post-cancellation should be included in any data release.
This data is relevant to the user experience of the system, as average loading is only one metric among many – the data could also be cut to include average delay per passenger, average cancellations per trip, number of passenger pass ups per service (which is especially relevant post-cancellation, as a reflection of the recovery time needed), and so forth.
Note most of the above would probably weight to peak hour services, which is fair enough, as that’s the period of highest usage and the experience the majority of people would have of the system (efforts to encourage greater offpeak use nonwithstanding.)
This would be of perhaps more relevance than the overall ‘99.8% of services ran’ – the 0.05% cancelled during peak probably disrupt more people than the other 0.15% combined.

I think there was an issue with them excluding late services as well, which are probably running late from boarding times anyways, which would defeat the purpose.. That’s what I read from The Age, haven’t seen FOI stats myself.

It depends on what you are trying to measure anyways – passenger headcount or comfort, service level, effective service level, etc. Also if cancellations are a regular occurance for a specific train (or late running), it doesn’t show in stats either

I know for a fact that there is no passenger loading between Hawksburn – Malvern. None at all.
And yet, for the Frankston line this is by far the busiest part of the journey.

I take your point, but if you want to be fair, you shouldn’t just exclude an individual service that is delayed/cancelled, but you should probably exclude All services the follow it (up to 20mins later).

So, a delayed service which is excluded will have people hanging out of it, but the next service which isn’t delayed, will be light on, because everyone has piled on the preceding service.

By doing what they are doing, the PTV are having their cake and eating it.