The centre has been getting ready

Importantly, a more direct pedestrian path, including zebra crossings, has been provided from the centre entrance to the railway station. Bravo! 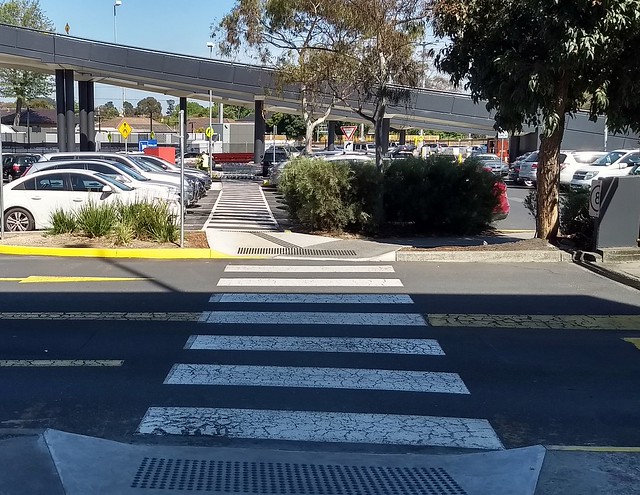 Wayfinding signage inside the centre already points the way to the station. 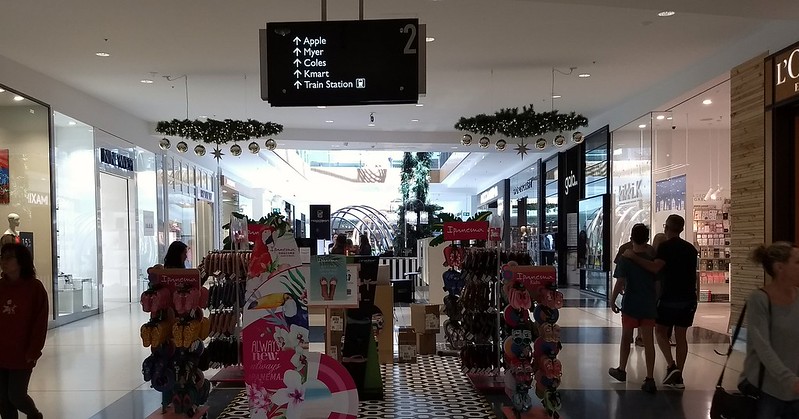 Paid parking (if you stay beyond 3 hours) was introduced a couple of weeks ago to prevent park and ride users filling the customer car park.

There’s still some understandable grumpiness about the impact on staff, being charged $5 per day. Some appear to have taken to parking in nearby streets outside the centre, such as along Nepean Highway and in the William Fry reserve car park. 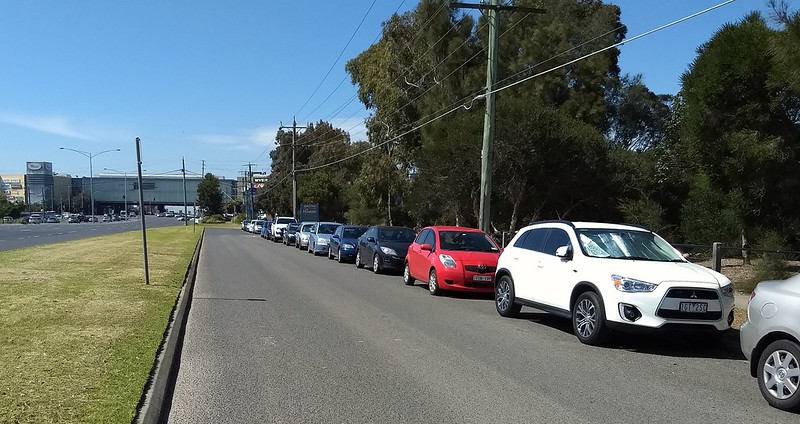 A short summary of the long history of Southland station

1968 – Southland Shopping Centre opened, though the original centre was on the eastern side of the Nepean Highway, and not particularly near to the railway line

1999 – New shops adjacent the railway line, and a bridge across the highway opened. Owners Westfield had proposed a station, but were knocked back by the Public Transport Corporation

2010 – However somewhere in the background, things must have progressed a bit, because both Labor and the Coalition promise to build the station going into the November state election.

Labor’s version included moving the bus interchange, and was to cost $45 million. The Coalition’s $13 million pledge excluded work on the bus interchange. Ideal? Perhaps not, but almost every bus route connects with the railway line at other locations, so not really a biggie.

The Coalition won the 2010 election, but there was little visible action for some years. By late-2012, it was obvious the project wouldn’t be completed in the 2010-2014 term, which in retrospect looks to have been a huge tactical error. If you’re trying to retain marginal seats, it obviously helps if you can show you’ve funded and completed beneficial projects.

2013 – Coalition funds the station, with construction to commence in 2015, opening in 2016. Around this time, forecasts emerged of around 4400 passengers per day — which if reached would make it one of the busiest stations on the line.

(Around this time, an FOI on the station revealed planning was underway for all-night trains on weekends. This eventually got pledged by Labor in the 2014 election, and delivered in 2016 as Night Network.)

All I want for Christmas is Southland Station. (The carpark is full. Currently expected 2016.) #SpringSt pic.twitter.com/uNhdYwjZjT

2015 – Following Labor’s win in the 2014 election, they reviewed the project, and included public consultation on issues such as toilets and whether the station should have an entrance from neighbouring Tulip Grove — locals decided not. Cleverly, PTV snapped-up a property on the street when it became available for sale, and used it for construction, and it will be future provision for an entrance. This delayed the opening to 2017.

2016 – Construction got underway in a serious way. By November the pedestrian subway had been built.

2017 – Construction has pushed ahead, and from August 2017 a timetable revision included allowance for serving the station.

In the past few weeks, Southland has started appearing on Passenger Information Displays and being announced – as the only station that trains aren’t stopping at!

How do people get to Southland now?

Mostly by car, which on busy days can involve a lot of hunting around for a car space. Apparently this has improved a bit on weekdays since paid parking, but from what I saw on Saturday, is still an issue on weekends.

Or you could get the bus. Buses are so infrequent on weekends (the busiest days) that from nearby suburbs it can be quicker to walk.

They are also so infrequent on weekends that it’s not uncommon to see the bus interchange completely devoid of buses. 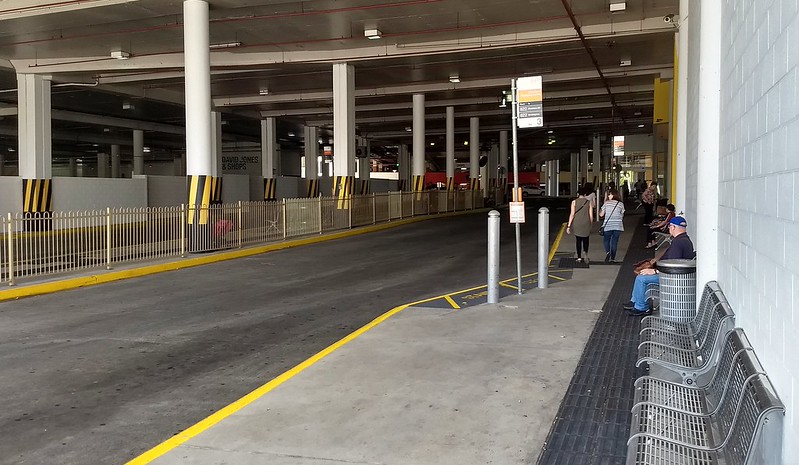 Or you could walk from Cheltenham station. You’ve likely already walked to catch a train at the other end of the trip, and then it’s about a 15 minute walk to Southland, most of which is not under cover. 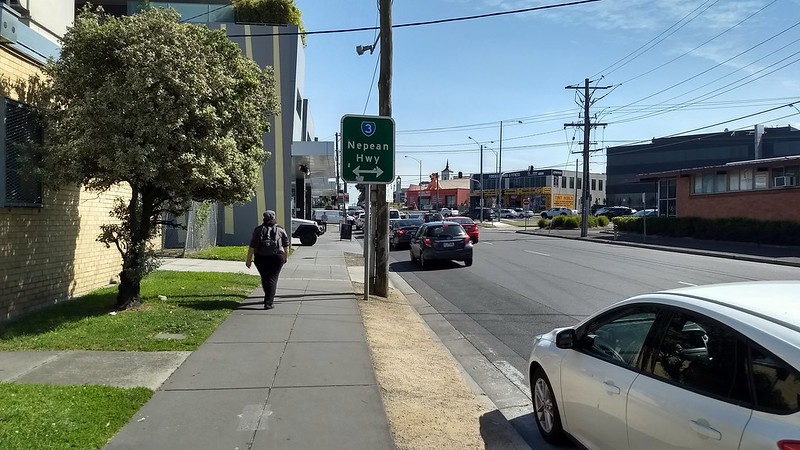 (Note the size of the road sign for Nepean Highway compared to the pedestrian. Has anybody ever studied the impact of these signs on the walking environment?)

If you want the main section (on the eastern side of the highway) you’ll face pedestrian-hostile traffic lights to cross up to eight lanes of traffic (plus service roads). Some people don’t even use the traffic lights, instead crossing mid-block — not something I’d recommend. 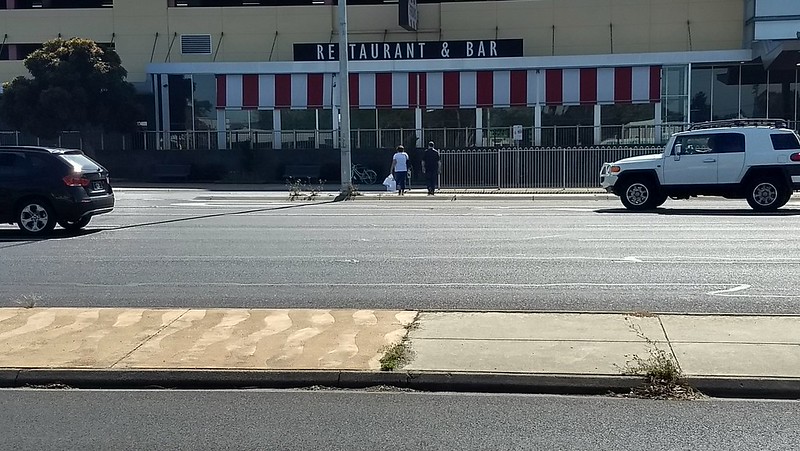 Or you could ride your bike. Nepean Highway has service lanes which are better for nervous cyclists than the main traffic lanes. But few of the east-west roads have bike lanes. And it appears the cyclist parking is inadequate — when I went past, it was all filled up. 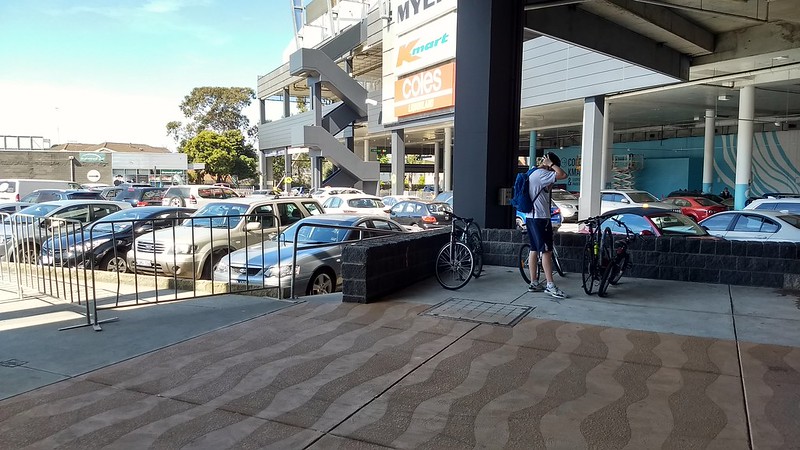 These conditions are precisely why a station makes so much sense.

When precisely does the station open?

You’ll be able to start using the station from the first service on Sunday 26 November 2017.

So, what’s the first service on a Sunday, given the all-night trains on weekends?

In the world of public transport, the end of the day is 3am. The timetables tick over; so does Myki (the 2-hour fares lasting all night after 6pm ends at 3am).

"You'll be able to start using [Southland] station from the first service on Sunday 26 November 2017." — the trains run all night, so it appears to mean from 3:41am Sunday. https://t.co/Li0R1DAi7J pic.twitter.com/DiB0QGV1HM

A look at the Frankston line timetables also indicates that the first trains serve the station after 3am on Sunday morning: 3:41am Frankston-bound, and 4:12am citybound (the train one hour earlier starts its journey at 2:44am, so is considered to be on Saturday night).

Edit: Turns out this is wrong because overnight there will be train replacement buses running. So the first train will be at 6:41 (outbound) or 7:12 (citybound).

Turns out I was wrong. Southland station won't open overnight because there's bustitution on Sunday morning until about 6:45. pic.twitter.com/Ql0utZgPR8

Join us on Sunday 26 November 2017 to celebrate the opening of Southland Station.

Be amongst the first to experience the new station and enjoy a free coffee and BBQ breakfast in the station forecourt, between 9.30am and 11.30am.

I’ve waited a long time for this. It’ll be great to see it open.

PS. If you’re wondering about the station code…

Not the best photo, and not conclusive, but it appears the station code for Southland might be SOU. #FKNline pic.twitter.com/tQQNm3g0aS

…An insider tells me it is indeed SOU.

11 replies on “Southland station, about to open – at last!”

Daniel
congrats to the public transport groups who have pressured various governments to build a station at Southland. Well done Daniel.
I hope that the launch goes without any problems.
Interesting to see the mix of people who use it – those commuting into the city and those user Southland (workers/shoppers).
In time for Christmas.

At last it’ll be feasible mid-trip to buy a few items from Kmart and jump on the next train 10 minutes later.

why would the train stop at the shopping centre at 3 am in the morning when it’s not even open? What a waste of people time who are on the train

@Jordan, not at all. It’s also a residential area, including proximity to new apartments along Nepean Highway.

This will be very handy coming from Frankston to shop at Southland on the train. We did so recently, and quickly caught a bus from Cheltenham station. Ended up walking back to Cheltenham station as in the Bus Interchange we didn’t know where to go, what to do, how long to wait and which direction the buses were going.

The chain bottle shops seem to be open 24 hours.

Coles, just near the exit towards the station, is open 7am-11:59pm (which means employees arriving/departing either side of that) and Woolworths is open 7am-10pm. Village Cinemas stay open until 12:30am (again with employees leaving after that and Cinemas mean that there will be often be large number of cinema-goers leaving near closing time on the weekends when the all night trains run).

All this means that, even if it were not for the residential areas which fully justify keeping the station open on their own, the shopping centre will likely be generating non-bottle shop passengers for all but about the first hour of services on weekdays and about 5.5 hours or less for 24 hour weekend operation and the number of passengers slightly inconvenienced by stopping at Southland during those times would have their inconvenience outweighed by the inconvenience caused to the system by those passengers.

It is also likely that more of the Coffee/take away breakfast food places on levels 1 & 2 will open for more of the 7-9am weekdays peak morning coffee on the way to the train period, due to increased demand from Southland station passengers accessing the station via the shopping centre (especially but not exclusively those who have to cross the highway) or taking detour via the shopping centre and Southland commuters getting their coffees after the commute, having previously got their coffees on route at somewhere less accessible by public transport. There may well be a similar increase in demand for places that sell the sort of small items people pick up on their way home, like groceries and chemist items, in the 5-7 evening peak.

This is quite irrelevant but a month ago I undertook a bike ride along the Dandenong Creek from Croydon to Carrum. Exhausted, after a 50+km bike ride (even though it was mostly downhill/flat), I arrived at Carrum only to see replacement busses. As a result of Skye-Overton Level Crossing Removal works, and Southland works, I had to ride all the way beside the Nepean to Moorabbin. Dumb planning on my side, but it would’ve been nice if the station had been done years earlier!
Thanks for another informative post,
Reuben.

I am celebrating the opening of this railway station. I aim to use it in its first weeks.

I do not normally visit Southland, but this time I will.

[…] many years of waiting, Southland station finally opened this morning, with an official ribbon cutting, attended by […]

When the Westfield foyers are open, the pedestrian access between the Southland station myki “gate” and the (east-side) Southland bus interchange terminal’s first platform is just under a 7 minutes’ steady walk. I have timed this. By comparison, walking between the archway of Melbourne Town Hall (northeast corner of Collins & Swanston Streets) and platform 13 (Sandringham line) at Flinders Street station takes just over 7 minutes. Most people would not object to that central city walk, other than for the occasionally bustling crowds.
With careful design and management, the bus-train pedestrian access can be a positive for public transport users, who can break their journey to shop or eat. This is a common practice in Japan, Singapore, Europe and several American cities. Westfield’s Market Street San Francisco centre stands out as a well-integrated public transport and retail facility