From time to time I’ll refer to the Frankston line on Twitter with the abbreviation FKN.

I’m not just trying to get a cheap laugh. Well okay, perhaps I am, but what people might not realise is that’s actually the official station code for Frankston.

Every station (and a good many other places, such as passing loops and sidings) in the state has a three letter code, used in railway circles. Occasionally you’ll see them creep into the public arena: 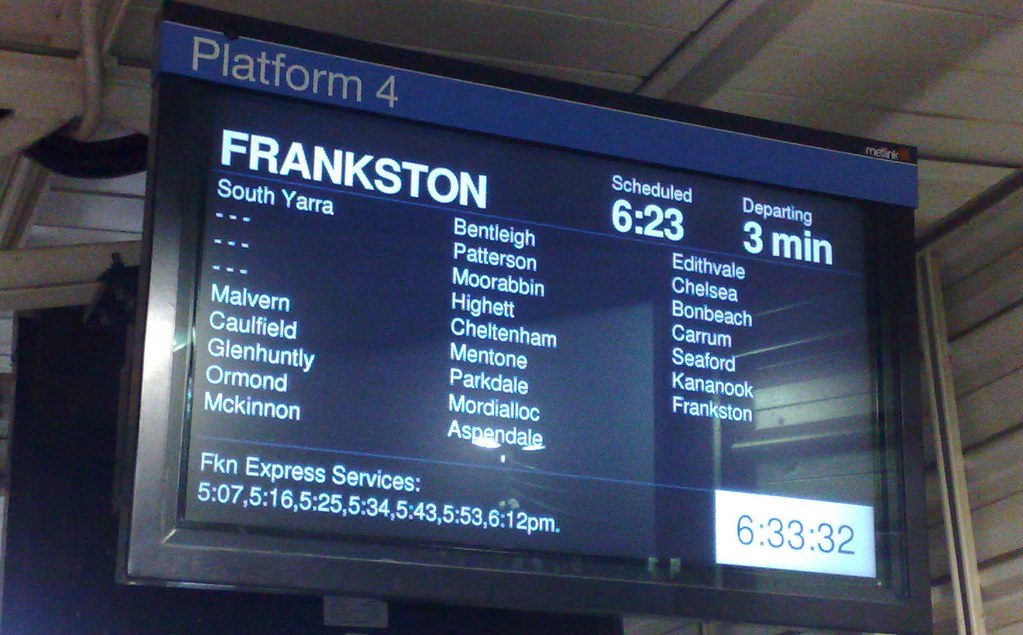 Source: Wikipedia: List of Melbourne railway stations, which lets you sort the list by code, name, line name etc… though an error or two has been spotted and corrected. In fact I’ve double-checked them against the Vicsig list and the Working Time Table.

21 replies on “Station codes: yes, FKN is the code for Frankston”

Another favourite of mine is Shepparton’s – SHT.

@Darren, I’m afraid the VicSig list disagrees with you: Shepparton is SHP (Vic) or SNH (Australia).

I was distracted by an outbound express service stopping at Malvern – then I realised the photo was taken 5 years ago ;)

Darn. I could have sworn I saw reference to “Route Sht” somewhere…maybe in the GTFS data?

Telstra exchanges have a similar system for their exchanges – they give each one a 4 letter code. For instance, Footscray exchange is FSRY. When they got to the Diamond Creek exchange they went the most logical route, calling it DICK.

Have only been living in Bentleigh a couple of years… did they seriously have express service like the one in the screenshot? I do remember before the last timetable change, there was an 8:30-ish express service to the city which went in that pattern, but opposite. I wish they had more like it, but suspect that due to the 3 line config, that they aren’t really any faster than all stops anyway. What a FKN line :(

Main problem is when you get overlaps, for example CAM is Camberwell in suburban Melbourne, but Camperdown in V/Line parlance and Campbelltown in NSW.

I’ve often thought that, just like with wagons allowed to run around the country, the stations could have a prefix for state or controlling operator, i.e. in 1979 the VOBX and AOBX types were roughly the same bogie-exchangeable open wagon, the former owned by Victorian Railways and the latter by Australian National Railways. Applying that to station codes, Camberwell would be VCWL (using the Australian code); Camperdown VCAM and Campbelltown NCAM.

@Darren, if it’s any consolation, Diamond Creek is DCK, similar to the phone exchange code that Patrick mentioned!

@wasabi, the pic is from April 2011. I think the timetable changed the following month to (almost) standardise express patterns (but it introduced some other issues, since fixed)

The codes seem fairly logical, except for SSS for Southern Cross Station.

Ballarat is always a good one to confuse people too… “BXT”. There are also other good examples in IATA airport codes, such as Toronto Pearson Airport which is “YYZ”.

Does the station code change when a station gets renamed? I know it’s a rare thing, but it makes me wonder if Melbourne Central had a different one when it was called Museum. Or was station codes not a thing then?

Watergardens officially changed from SDM to WGS in conjunction with the November 2012 timetable, which extended suburban trains to Sunbury, which also had its abbreviation changed from SBY to SUY at the same time.

Another abbreviation that has changed in recent years is Newport Workshops, which officially changed from NWS to NPW in conjunction with the May 2011 timetable, but both still seem to be used interchangeably.

Re: Wattle Glen – An unofficial abbreviation WGN is often used to avoid confusion with the working timetable abbreviation. This is one that really should become permanent, because, let’s face it, nobody is ever going to think of Wattle Glen when faced with the letters WTT.

And on the topic of unofficial abbreviations, my favourite is FFS for Flinders St ;)

I do not mind the use of three letter codes in the public area providing information about those codes are well known.

For that, I would expect every stop in the network map to have its code as a prefix or suffix or something.

Otherwise, it needs to be avoided.

What hope for a north Brighton ? It has been saddled with NBN
Favourites are Ham and Gin

Straying slightly from station/exchange codes, but staying firmly in the geek arena. We have a Linux utility called fsck (File System ChecK).

I lean towards publishing the 3-letter codes.

In-fact, I support having an Information Panel in a prominent position(s) at every station, listing the station name, zone, 3-letter code (Victorian code), its official street address, an 8-figure telephone number for staffed stations, and the line (eg “Belgrave line”).

As well as making it easier using Twitter, the 3-letter codes are (were?) used for services like the SMS timetable where you can send a message containing the first five characters of the station name. But some 5-char prefixes are ambiguous, so as an alternative, one could use the Victorian 3-char code.
I’m not sure if it’s still operational, but the full instructions are compose a message with
Origin Destination h:mm{AM|PM} dd
send to 19726669. h:mm{AM|PM} dd are only used if travelling later.

| with (for maximum confusion) the Australian codes as well
Therein lies a thorny problem with Australians: they will pick the hardest, most expensive way to do anything.

That’s why it costs $55m to deal with five refugees (to Cambodia), and $50,000 per month per refugee to deal with the rest of them. Time to adapt that software engineering joke cartoon to the refugee situation, I think.