Bentleigh state MP Nick Staikos has released a map of a proposed new bus route, from Moorabbin via Bentleigh and Hughesdale to Chadstone:

Releasing a proposed new bus route for discussion. What do you think of this #Moorabbin #HamptonEast #Bentleigh #EastBentleigh #McKinnon? pic.twitter.com/tf2w2wIM6a

As I see them, the pluses:

But it’s not perfect:

The problem is that, apart from filling a couple of gaps, this new route hasn’t really been designed within the broader context of the existing routes.

I’m told there will be consultation, which is good, but so far it hasn’t shown up on PTV’s Get Involved web site — which I hope it would.

Here’s what I’d do

For a moment, let’s leave aside the question of whether the 822 should be moved to East Boundary Road (yes it should, alongside other changes as part of a broader plan).

And let’s assume the funding for this new route has it operating at the same sad frequency as most existing local routes: every 30-60 minutes (there are no service frequency or operating hours details yet). (View on Google Maps. I’ve deliberately drawn most of the lines not precisely on the roads, to keep them separate for legibility.)

I’d swap the eastern part of 626 with the northern part of this new route. 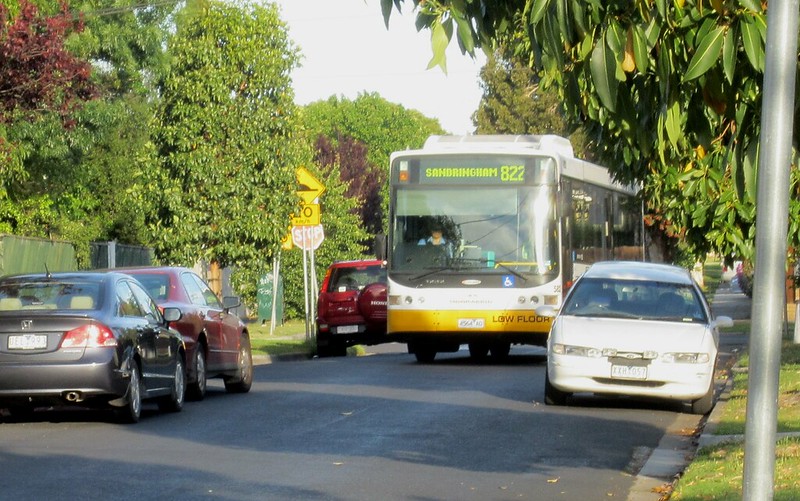 (As you can see from the map, the 626 is already quite a squiggly route at the Brighton end, thanks to Brighton’s NIMBYs having campaigned to get the buses removed from Union Street and Landcox Street, and Vicroads’ reluctance to alter Nepean Highway to allow westbound buses to use Union Street. The 822 in contrast has the potential to be a good quick direct service. Marlborough Street is the route’s only current very slow section.)

Some have made the point that the area may not need a new route; that we do need increased frequencies and operating hours on the existing routes — this is certainly true. The 703 is overcrowded at times, and has a very poor evening service after 7pm, and on weekends. Other routes are mostly the bog standard 30 minutes weekdays/hourly on weekends and evenings — the 822 and 767 in particular are worthy of upgrades to cut waiting times and get more users.

This proposed route? Good, but with some tweaks, could be better.

Thoughts? Post them here, and/or get involved in the public consultation — details to come.

This morning's Bentleigh flyer from @NStaikos – Happy Birthday new stations / have your say on a proposed new bus route 🚌 pic.twitter.com/H9cfupZG5w

11 replies on “Proposed Tucker Road bus would fill a gap, but…”

I’m biased because I live on Marlborough Street, but I don’t see why any bus needs to snake through side streets, rather than use Easy Boundary Rd.

With an east-west and north-south split, passengers on the east-west bus have the choice of changing to either the north-south bus or the train (and its much greater frequency and traffic independence) to get to the Moorabbin station area.

The 822 should do all of East Boundary Rd and none of Marlborough St.

@Dave, if you would like the 822 moved to the main road, be sure to tell Nick Staikos, your local state MP, because I gather he got a lot of grief when he proposed that should happen.

I would love your ‘new route – my proposed’ bus route, the 626 is always late by the time it gets to Koornang Road traveling north.

I think your proposed routes make a lot of sense, I think the area does need new routes, and the eastern end of McKinnon Rd, and northern end of East Boundary Rd and current gaps in service. I live near McKinnon Primary and use 626 frequently to access either Chadstone or Carnegie shops/library and aside from the infrequency it is great. I don’t care if the number on the route changes as long as I can still get on/off a bus outside the school. Not that I personally have need for the service I have always thought the lack of bus from McKinnon train station to GESAC was ridiculous, and your proposal mostly remedies that. The end of McKinnon Rd is close enough for me, though I do know if would not be near enough for a person with restricted mobility (I don’t think Marlorough St is really any closer to the facility either). I do very occasionally catch the 626 south/west to McKinnon station or Brighton, it would be mildly annoying to have to swap buses or walk to the corner of McKinnon/Tucker but not a big deal.

Like your alternative proposals, but I have no confidence that any bus route can be changed, given the Hope street 509 bus route abolishment and subsequent reinstatement.

The bus going up Tucker Rd is a great idea but it should have a stop near between Fromer and Mortimore Sts As we only have The 701 bus which goes from Oakleigh to Bentleigh. We don;t have any other buses and only this since we’ve where we are. It was better when we temporarily has buses between Caulfield and Moorabbin, even though it is too far to walk at night.

McKinnon Road between Tucker Road to East Boundary Road is far too narrow to host a bus route. It’s already a hazard with bicycle lanes & car parking on either side. The street is a nightmare at Valkstone Primary School’s drop off & pick up times, making it difficult for a single car to pass through. I witness on a regular basis, car mirrors being knocked or smashed because of this. It’s only a matter of time that there will be a fatality. Adding a bus will only increase the likelihood. Nick Staikos do you really want blood on your hands? The bus route should continue along East Boundary Road and into Centre Road. This would allow for a much needed public transport drop directly outside of GESAC, and provide access to Bentleigh East Shopping Centre – not everyone wants to shop at Chadstone. Surely common sense will prevail.

The 626 plan has some merit, but would those in western McKinnon mind sacrificing their direct Carnegie connection for the greater good?

For sure, sending the 822 direct along East Boundary Rd and reinstating a 20 min peak headway (cut in 2002) should be a secondary aim of the new route.

I’m not a fan of the wandering 701 that the bus review proposed to cover Marlborough Rd (see – https://www.danielbowen.com/2014/09/08/buses-need-a-proper-plan/)

Rather, I’d suggest the new route continue east into Deakin St then north up Marlborough St, North Rd, Crosbie Rd, Murrumbeena Rd and Dandenong Rd to Chadstone – this would also maintain the north-south bus service for those people in streets east of Duncan MacKinnon Reserve

What about people in Carnegie who use the 626 bus to get to Middle Brighton/North Brighton?

How many people actually make this trip? Every time I’ve used the 626 bus from Chadstone/Carnegie, just about everybody is off the bus by McKinnon – and if they’re coming from Chadstone then they’d have other options.

The 626 has only run to North/Middle Brighton since 2010 by the way. It’s not like it’s a decades-old connection.

By the way, depending on departure times, the quickest way from Carnegie to North Brighton is actually bus 623 then the train. As little as 26 minutes (depending on connections) vs 29-33 minutes on the 626.

To my surprise, in peak hour, it can actually be quicker to use the train via South Yarra than catch the 626.