Incumbent Elizabeth Miller has gone strong on “saving the 822“, promoting via Facebook and an ad the front page of the local Leader newspaper last week, apparently trying to imply that Labor is proposing to scrap the route completely. 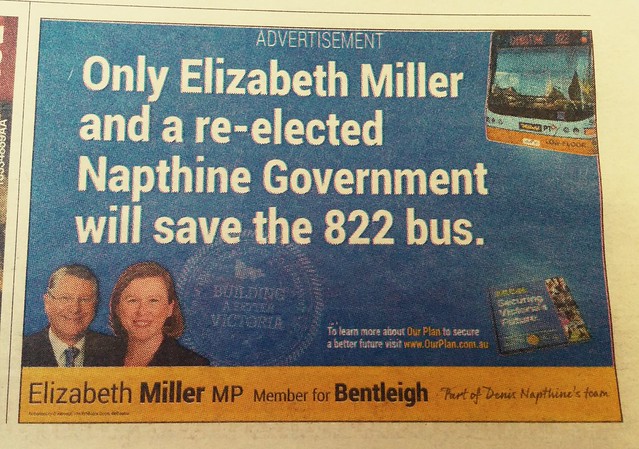 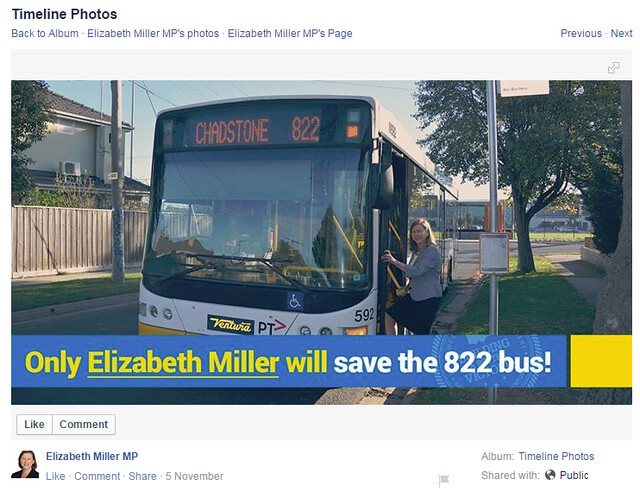 This is classic FUD — Fear Uncertainty and Doubt. There is NO plan to scrap the route.

I asked the Labor candidate Nick Staikos about it, and he said their intent is the logical move of the route off the backstreets and onto East Boundary Road (as proposed in the 2010 bus reviews), for a speedier trip and to better space out the north-south bus routes — there’s a huge gap between the Frankston line and the 822, with no services on Jasper or Tucker Roads.

But they’d do any change with community consultation to make sure as many people as possible are happy.

Part of that change might be moving the 701 from Mackie Road onto Marlborough Street to cover the section removed from the 822. As I wrote a few months ago, that’d be a good solution as it would remove duplication on Mackie Road (which also has the 767).

It would be difficult to have the 701 turn right from Marlborough Street onto North Road could be troublesome with no lights at that intersection, but the 2010 plan had it following the current 822 route as far as Duncan Mackinnon Reserve, then heading back towards Oakleigh.

Labor aren’t talking about proposed bus frequency upgrades. The 822, like most suburban buses, is appallingly infrequent, particularly on weekends. . See below.

There’s obviously some detail to nut out, but nevertheless the Liberals’ posturing is nonsense. It seems to be trying to imply that everything is fine with the local buses… clearly not the case. One way of reading it would be that “only the Liberals” will fail to do anything whatsoever to improve them.

Fact is, local buses in Bentleigh do need improvement. Making the 822 a main road bus is a good start. Making it and other routes more frequent is also vital.

Update: Labor’s Public transport spokesperson Jill Hennessy has spelt it out on Twitter:

. @danielbowen Labor will retain the 822. This is desperate Liberal party palaver. #vicvotes #springst

Update 25/11/2014: Partly for anybody clicking through from Jarrett Walker’s blog post, here’s the map of the current route, highlighting the diversion through Crosbie Road, Marlborough Street, Stockdale Avenue and Gardeners Road (including one-way sections) proposed to be changed to run direct along East Boundary Road (which is not shown in full on the map, but is a continuation of Murrumbeena Road) instead. It’s also worth noting that it was not just Labor and the 2010 bus reviews that proposed this change.

Elizabeth Miller herself also called for the change shortly after she won the seat of Bentleigh:

Since taking office as the member for Bentleigh I have been shocked to discover that the former government made no provision for public transport to and from GESAC’s front door.
…
I call on the minister to investigate with his department the appropriate alteration of existing bus routes, including the 822, to provide a bus stop outside GESAC on East Boundary Road, Bentleigh East, to ensure that as many residents as possible of Bentleigh and neighbouring communities are able to access this wonderful new facility. — Hansard, 24/3/2011

By earlier this year, she had changed her mind:

The 822 bus currently services this facility [Glen Eira Sports and Aquatic Centre) on Gardeners Road at its rear. The bus service to the facility is well patronised. I note that the opposition is currently conducting a petition to state otherwise. — Hansard 25/3/2014

If I was running the other party, I’d run adverts saying “only we will IMPROVE the 822 bus”

Perhaps they could follow the lead of SkyBus and order Double Deck buses for this route?

” I also see many elderly using that bus as I believe it travels to southland and Chadstone …. ”

The sort of comment you get, from someone who has never actually caught a bus !

@Jim, bigger buses are not solving the problem. They would fix vehicle capacity, but the issue is the directness of the route and the infrequent service.

as a regular 822 user, it is important for me that the bus goes down the sidestreets. ok fine, go ahead and reroute the 822 but make sure another bus covers the original section