As we move towards the election, in the marginal seat of Bentleigh, candidates are rightly pondering public transport issues. Trains are already getting a makeover thanks to recent frequency increases and the Bayside rail project.

So then… what of the buses? These are important — many people use (or could use, if they were better) buses to access their nearest station, as well for local trips.

This applies all across Melbourne of course, but I’m going to look at some specifics in the Bentleigh electorate.

Significant routes in the electorate include the not-quite Smartbus 703 (east-west along Centre Road), 822 (north-south along East Boundary Road), and the 630 (east-west along North Road). There are numerous other routes as well. 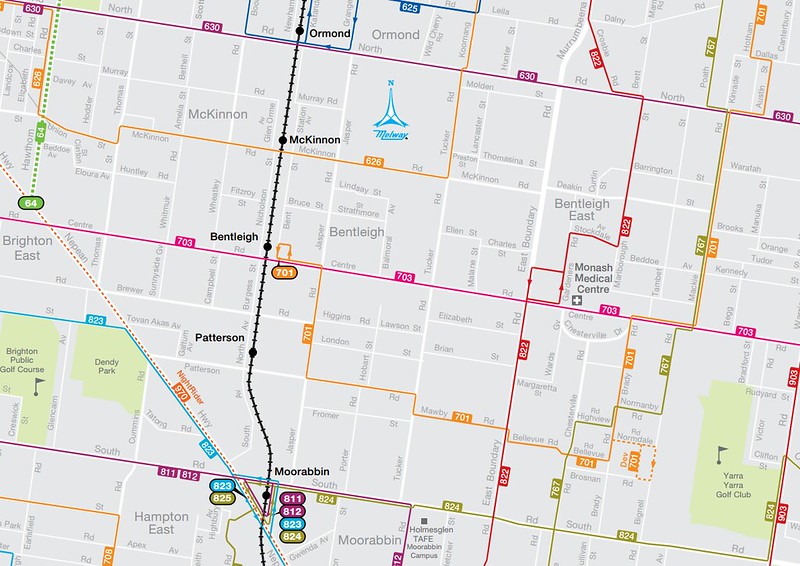 Elizabeth Miller (sitting; Liberal) — as far as I’m aware has not expressed a particular view on buses, though in the past when I have asked she has enquired with PTV on the 703, and reported back that they believe an upgrade between Bentleigh and Clayton is warranted due to demand/crowding, but that Bentleigh to Brighton may not be viable (eg on Sundays) as there isn’t sufficient demand. Not sure how you measure demand when the service doesn’t run.

Nick Staikos (Labor) — Nick has a petition (which I have signed) running on moving the 822 out of the side streets onto East Boundary Road, as a way of better serving Glen Eira Swimming and Aquatic Centre (GESAC). He’s also said we should expect bus-specific policies from Labor in the near future, and noted that Labor policy at the last election was to upgrade all of route 703 to full Smartbus status. (Will update when/if anything is announced.)

Sean Mulcahy (Greens) — agrees with moving the 822, but has told me he wants to see it done as part of wider network reform.

(I’ll update this section as other policy positions emerge.)

The 2009-2010 bus reviews included a great deal of local input, and came up with a variety of proposed changes that would work together as a network.

Broadly, routes categorised as Principal or Main were proposed to be straightened-out and made more direct (which is a good thing if you want more people to consider bus travel against driving their cars). Local routes fill in the gaps for people unable to walk to a Principal or Main route.

Some changes were flagged as requiring road upgrades first, such as traffic lights so that buses can more easily make right hand turns into main roads. 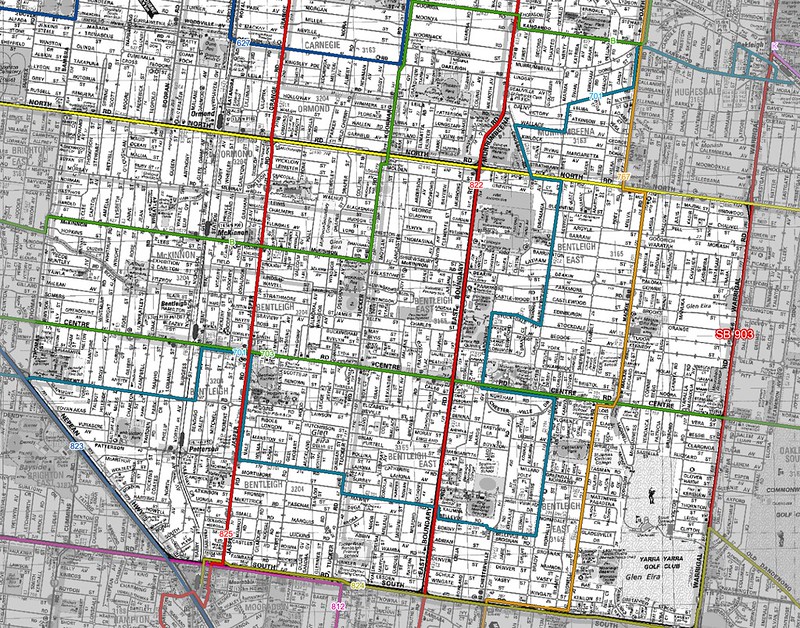 I’m going to go into some detail here, as the proposed changes were not widely publicised. Skip over this bit if you’re not interested in the specifics.

630: proposed to get better timetables to benefit the Huntingdale to Monash end (this happened indirectly with the introduction of the 601 shuttle), and an extension at the western end to St Kilda

703: adjustments to the route in Brighton to make it more consistent with other routes

767: straightened out to continue down Bignell Road (may require traffic signals at South Road), and peak-hour deviations removed

811/812: combine into one route, and remove peak-hour deviations through Moorabbin (replaced by changes to 631), and minor changes in Brighton and around Southland

823: Extend to run from Elsternwick to Mordialloc along Nepean Highway, and more frequently

822: Truncate at Southland (instead of running to Sandringham), and move it off the side-streets behind GESAC to run direct down East Boundary Road (Marlborough Road section replaced by 701)

825: Extend existing route Sandringham to Moorabbin up to Caulfield via Jasper Road (arguably this duplicates part of the Frankston line, though it would also better serve some local trips not suited to the wide spacing of railway stations)

627 Elsternwick to Chadstone section re-routed to be straighter, avoiding Ormond station — this wasn’t done; it’s a questionable outcome to disconnect it from the Frankston line

701 re-aligned to replace route 822 in Marlborough Street in Murrumbeena, and extended from Bentleigh along Brewer Road and Marriage Road to Brighton — this hasn’t happened. They also considered changing the 701 from heading to Oakleigh to instead go to Murrumbeena, though this isn’t reflected on the map.

They also made recommendations on service levels — at the time, they expected train frequencies to be standardised to 15 mins, and what’s happened instead is a (good) move towards 10 minutes.

You’d never want to cherry-pick of course, but from the looks of it, a good first stage of changes would be re-routing (but not truncating or extending) routes 822, 701 and 767 in East Bentleigh. That’d be cost-neutral, I would think. 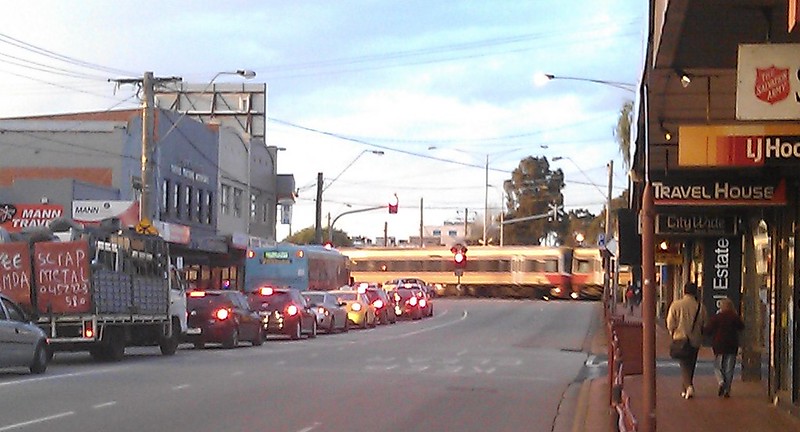 Earlier this year PTV released a “stage 2” report on the Rowville corridor — mostly concerning bus services in the area in the interim ahead of any rail line being built. It proposed the 703, which serves Bentleigh, be split into two routes:

The logic was that the Clayton grade-separation is years away and causes long delays to buses, and also that the northern half of the route is much busier.

This makes some sense, but there are two main issues — firstly passengers from the Brighton and Bentleigh areas would have to change buses at Clayton (and walk across the tracks) to get to Monash and beyond. Wait times might not be too bad heading north if the northern half of the route runs frequently, but you’d risk long waits heading back the other way if you just miss your connection.

Secondly, it represents a big reduction in service from the present 15 minute weekday frequency. The government obviously realised this as they quickly put out a press release which welcomed the overall report but specifically said they didn’t support the frequency change.

The report didn’t specify if the proposed frequency would apply all week including weekends (which would be an upgrade), or just on weekdays during daytime/peak (a downgrade).

Unfortunately we don’t know what PTV has in mind for the rest of the network because only the rail plan has been released; not the plan(s) covering buses and trams. However we do know they intended to sort routes into tiers, and upgrade the most important routes to high-frequency operation. 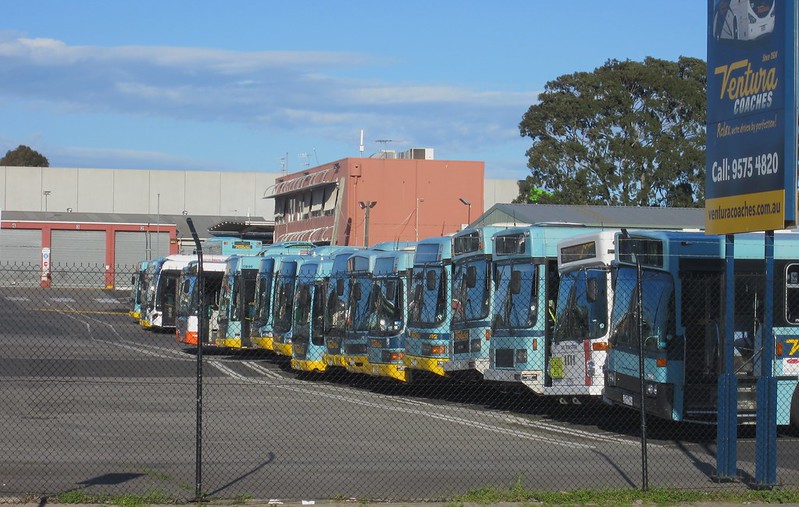 There are other issues of course apart from network structure. The frequency of services needs addressing, particularly on weekends when many people are travelling, some routes are over-crowded, almost all have long waiting times, and hundreds of buses sit idle in depots doing nothing.

Better connections with stations and other local amenity, and a route structure which ensures buses are more competitive with car travel (while still effectively serving people who have no choice) is vital for all those areas beyond walking distance to the trains. The changes proposed in 2010 are probably a great basis for network reform — for the most part it’s hard to think of reasons why they shouldn’t be implemented.

It’s all very well for (some) candidates in Bentleigh to say they’ll move the 822 onto the main road, but you shouldn’t be fiddling with individual routes in isolation. It should be part of a plan to ensure a cohesive, usable network.