Those of you who follow me on Twitter might recall I spent a lot of July last year posting about the 5 weeks of bus replacements on the Frankston line.

One of the things they got right was to run the buses along the main roads, rather than diverting them into the railway stations, three of which were major construction zones at the time.

Most buses ran along Grange and Jasper Roads, where rail replacement bus stops were installed. Their precise placement wasn’t ideal from a passenger point of view — they were sometimes a couple of hundred metres from the cross street that linked the road to the station — but overall it wasn’t too bad, and there was some logic to (where possible) re-using existing bus stops and shelters.

Overall it wasn’t perfect, there was crowding at times and long waits at others. But replacing a busy train line with buses isn’t an easy task, and we survived (though many sought out alternatives).

This seems a bit defensive for saying that #bustitution will use the regular bus stops.
Also: not via main road anymore? Too efficient? 🚌🚇 pic.twitter.com/HkpWlj5c9W

With those three level crossing removals more-or-less completed (2 of 3 bike cages still aren’t operating), earlier this year they decided to put the replacement bus stops back at the stations, restoring the old zig zag route from Caulfield to Moorabbin. Not that it’s regularly used; it comes into play if the line is suspended or there is planned maintenance (since the crossing projects were completed, none that I can recall).

But this zig zag route has problems. I saw it in action a few weeks ago, when an incident at the pedestrian crossing between Glenhuntly and Ormond caused train services to be suspended from about 8pm until the last service.

It’s odd that they didn’t detour to Patterson. There is still old signage around that indicates rail buses used to make a detour. Maybe they want to make absolutely sure the buses stay away from the low bridge? 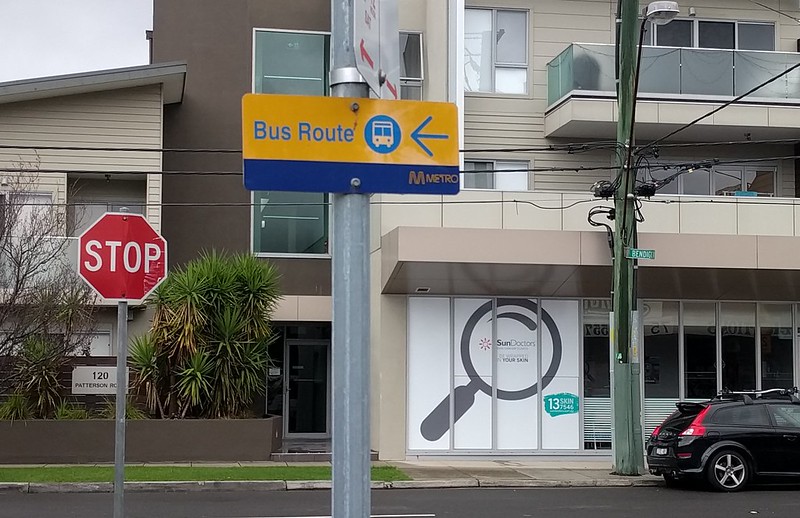 With all that zig zagging, the end result is the bus took 27 minutes to travel 9.4 kilometres, or an average speed of 21 kilometres per hour. And this was at 10pm at night, with virtually no other road traffic along most of the route. No congestion, and little or no wait to turn from side streets into main roads. In contrast, the train normally takes 12 minutes. The parallel 822 bus, with far more stops than the train replacement bus, takes 18 minutes — and that’s with a detour through some of East Bentleigh’s back streets!

Why Direct is better

Usually overall faster for passengers, even those going to/from the stations without train service. A 5 minute walk from a direct route is quicker than buses winding in and out of side streets to get to the stations.

Always faster for through passengers not using those stations

Easier for buses to navigate main roads. Smaller side streets may be physically difficult to turn in and out of, and may cause delays due to waiting for other traffic to turn

Reduces the need to run separate express and stopping buses

Because it’s quicker, the buses can run more often with the same fleet. This is particularly important in the time when buses are being organised, when resources may be thin on the ground.

Why Zig zag is better

Stops are close to stations, fairer for most passengers. Main road bus stops may be a long distance from stations

Easier to find the temporary bus stop from station, as it’s nearby and familiar

Supporting services like staff, toilets, maps, ticket machines, PSOs (after 6pm) are at the station 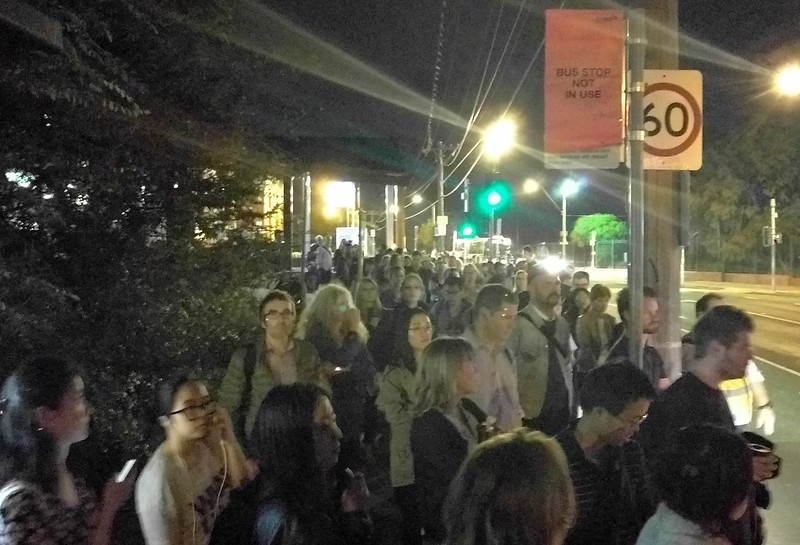 So which is better?

What other factors have I missed?

During level crossing works, taxis were also available for those who couldn’t walk to the replacement bus stops or easily use the buses.

And in some scenarios, some buses (for through passengers) can connect from other lines rather than running parallel to the railway line.

Between Caulfield and Moorabbin, the logical main road route is close to the stations, about five minutes walk for most people. On this line, I’d probably say it makes more sense to use it for replacement buses than the zig zag route.

On other sections of this and other lines, that may not be the case. But I don’t think rigidly zig zagging along a route to stop outside each station in every case (except Patterson?!) is necessarily the best outcome for passengers.

This weekend (just gone) there were replacement buses from Sandringham to Elsternwick. So yesteray afternoon my 19 y.o. drove from home (Hampton) to Elsternwick, found a parking spot close by and caught the train into the city. She returned at 9pm, found her car and drove home.
On other occasions I’ve ridden my bike to Moorabbin to catch the Frankston line train to avoid replacement buses on the Sandy line.
I realise not everyone has these options, but I suspect a lot of people find alternatives to avoid replacement buses for the reasons you mentioned in your blog today.

I recently experienced replacement buses on the Moorabbin to Mordialloc sector. It was also inconsistent. The Highett replacement stop was 350m away, on Nepean Hwy. But for Cheltenham, Mentone and Parkdale, the bus deviated to stops adjacent to those stations. If it had travelled straight down Nepean Hwy, replacement stops would have been 400-500m from those stations. I wonder if Metro is applying a maximum deviation distance rule to decide whether or not to zigzag?

As a wheelchair user I had a range of experiences with the bustitution on the Lilydale line. Sometimes I used the bus while at other times I was directed to a waiting wheelchair taxi. There did not appear to be much consistency as to whether I would be directed to the bus or the taxi as sometimes even during peak I was still directed to use the bus although the taxi was waiting empty.

I found the bus to be more convenient practically at off peak times because it is quicker to be loaded into a bus than a taxi. Many of the buses used would not lower properly as the mechanism was damaged. This means that the ramp onto the bus is quite steep and hard to use. It would also be helpful if the footpaths at bus stops were built up slightly to help with more level boarding.

This can also be an issue with some train platforms, if the gap between the train and the platform is large the ramp can be quite steep. One of the worst stations for this that I have seen is Essendon. The ramp from the train at Essendon is steep enough to be very dangerous, especially from Siemens trains. From this regard it would be good if they rebuilt the platform as part of that level crossing removal but as I understand it that is not part of the plan.

I have had bad experiences in the past on the Glen Waverley line, heading to Kooyong on a Saturday to play blind cricket. The replacement bus used to stop right outside the station, but was changed to run directly up Toorak Rd. (possibly indicated by signs but I was unaware). No announcement was made and the bus did not stop at Glenferrie Rd. It also went straight past Tooronga Station. I eventually managed to get the driver to stop at Malvern road and I (and the other blind passengers) had to walk 30 minutes back to Kooyong. I think in this case, given the customers who use Kooyng station (Vision Australia), the zig zag method should be used.