This means after three and six months respectively of bus replacements, we can — if you’ll excuse the phrase — see the light at the end of the tunnel.

I’m hoping lessons and experience have been gained through the level crossing removal project that can be applied to the rail infrastructure projects to come. I’m told that the project team will write up their findings, and present them to the government, to inform later project teams. Whether these documents are public or not seems doubtful.

As far as bus replacements go, what have we learnt?

For a start I think there are four levels of bustitution, with varying levels of chaos. 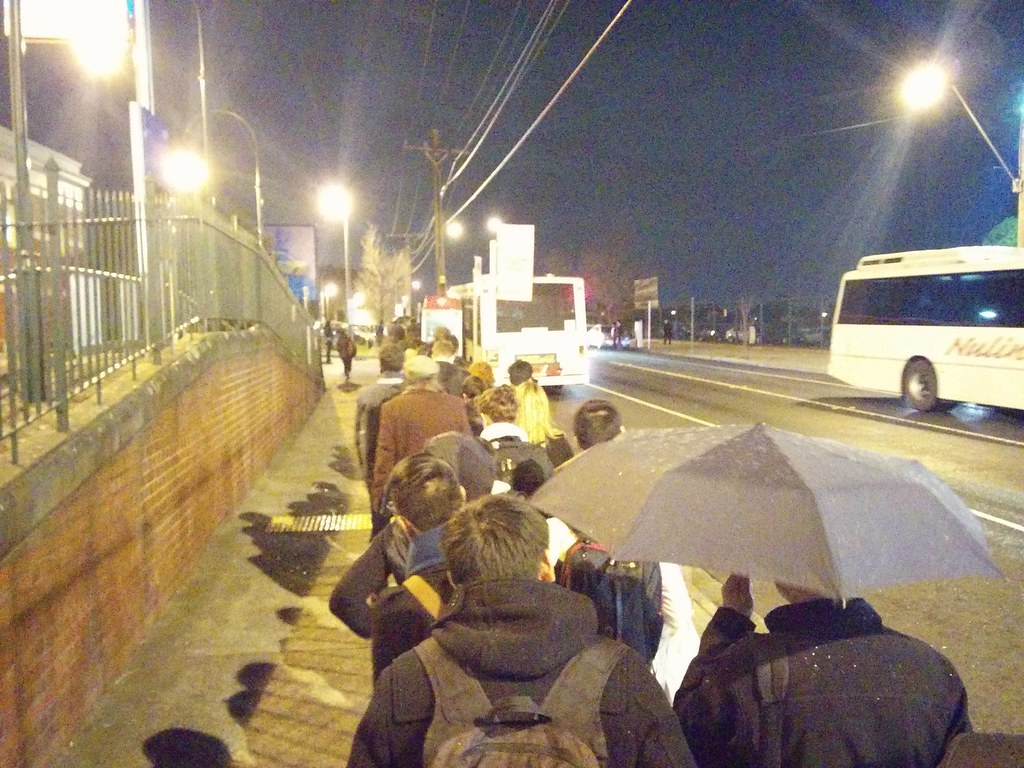 Small scale bustitution (perhaps serving 1-3 stations) means the demand is not too great.

Don’t get me wrong, it can get busy, but you’re talking hundreds or thousands of boardings per day, not tens of thousands.

This means it’s practical to serve these journeys by bus. They’re not as fast, or comfortable, but it’s manageable if they’re resourced properly, which the Bentleigh/Ormond ones have been, though of course all those buses and drivers and despatch staff come at a cost. 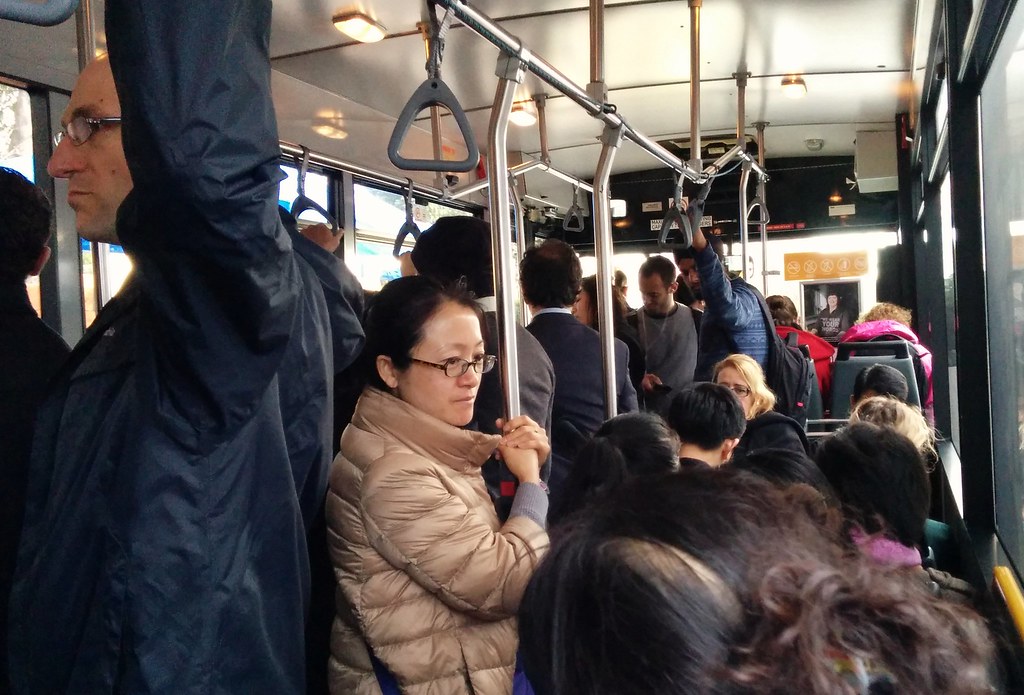 Large scale, taking out an entire busy train line, means there are likely to be tens of thousands of passengers per day.

With adequate advance notice, some people will avoid it by driving or catching buses to other lines. The Sandringham line and the Nepean Highway bore the brunt of the Frankston 37 days, with extra Sandringham trains running. Some people migrated over to the Dandenong line as well.

The remaining people squeeze onto buses, and provided it runs smoothly, it’s bearable, though not necessarily pleasant. When any little hiccup occurs, such as traffic congestion affecting bus throughput, long delays can easily happen. 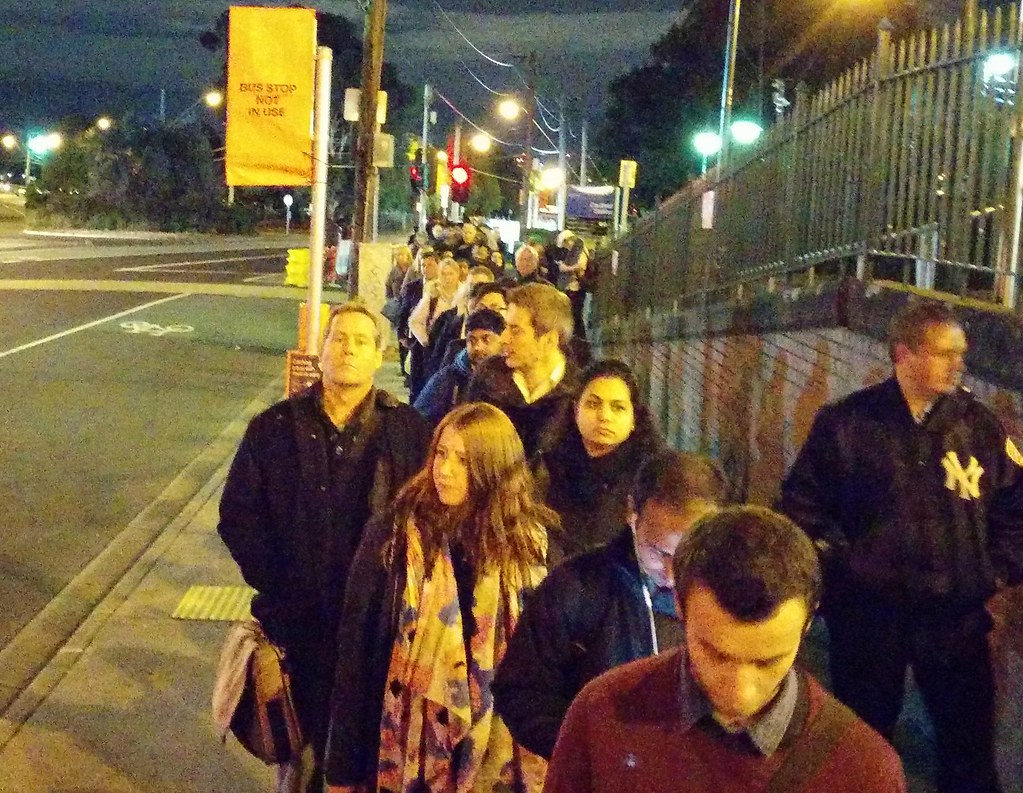 Despite Metro being warned numerous times to properly warn people, only template-conforming emails and posters were out there, with the key detail “THIS AFFECTS PEAK HOUR!!!” lost in the noise.

The result was almost nobody knew about it. Those who would normally avoid it were caught up in it instead, resulting in long queues for both stopping and express buses.

The photo below was an example: as our bus arrives at Glenhuntly, it’s already full. A huge crowd was waiting; most of them couldn’t board the bus. I saw another bus pull up behind, but who knows if they could squeeze onto that either. 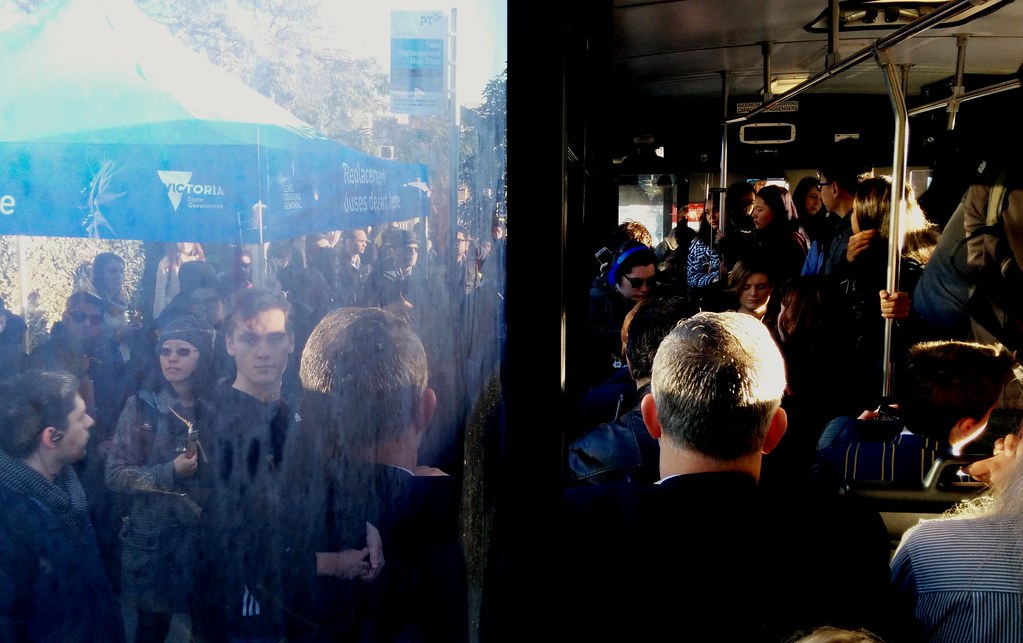 There were numerous horror stories for express bus users as well, with waits of 25 minutes or more at Moorabbin to board buses.

All too common when an unplanned rail outage occurs; caused by equipment faults (such as last night on the Upfield line) or trespassers or accidents.

Almost inevitably it’s chaotic because it’s difficult to call up buses at short notice. It can be particularly bad in peak hours when large numbers of people are travelling, and most buses being busy with normal runs.

The situation is often made worse by some lines having very few places to turn trains around, meaning replacement buses have to cover a lot of ground. 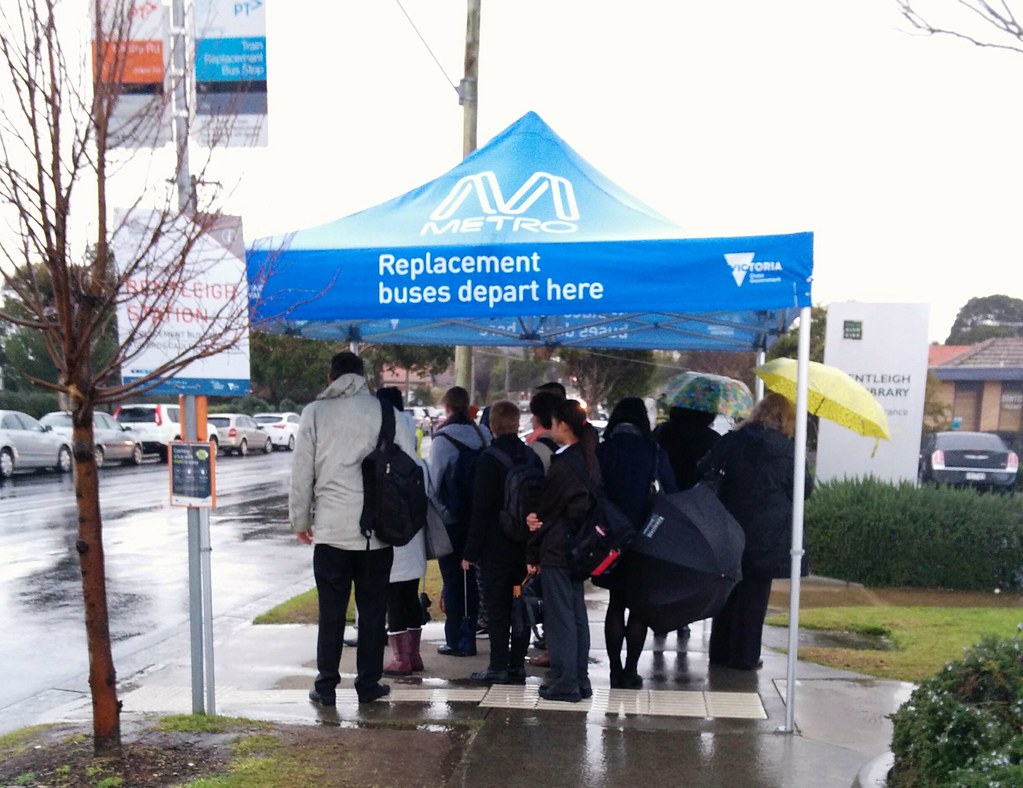 It’ll be good to have our trains back and our new station open next week.

5 replies on “The four circles of bustitution”

I’ve noticed that bustitutions on the Burnley group can and do run all the way to Richmond, but bustitutions on the Caulfield group only affect Caulfield to South Yarra/Richmond if there’s a major unplanned disruption. (Is this because it’s relatively easy to move Frankston / Dandenong trains to one pair of tracks during works, while Burnley trains have parallel up/down lines to contend with?). It could be a lot worse :p

If you want to catch an outbound Burnley group service from the city during bustitution, there’s usually some complicated arrangement from Parliament that could be made a lot simpler by making Caulfield trains run direct during this time.

They’ve improved in recent years when Darling-Glen Wav is suspended. They run express buses from Glen Iris straight down High St Rd which is often not much slower than the train to GW, as well as all stoppers from Darling. And if planned, they have traffic control on Huntingdale Rd to let the buses out of the side road (with ‘road work’stop go signs as there is presumably no temporary traffic control provision other than that under the Act). But supply and demand is the problem, as ever

I reckon that they need to review the provision of turnback facilities. Provision is very inconsistent on lines, and they don’t seem to account for a turnback location being affected.

For example, there is no turnback facilities between Clifton Hill and Heidelberg, which is a long way to bustitute. If Heidelberg is affected, bustitution needs to extend Clifton Hill – Macleod. Similarly, work at Elsternwick will take out the whole of the Sandringham line.

With all the works to be undertaken over the next decade, it would be interesting to know if they are reviewing where turnback locations are provided – based on how far apart they should be and access to the road network.

From my observations catching the express bus from Caulfield to Moorabbin several times, and also passing through there in my car, things didn’t go well there in the late afternoons ~4pm. There were long queues of cars trying to turn left from Nepean Hwy into South Road, blocking not just the turn lane but also lane 1, which the buses were in. And in the other direction, traffic turning north from South Rd. into Nepean Hwy appeared to have priority over southbound traffic, which included the replacement buses trying to get across South Rd. to the bus stop. The last time I used the replacement bus it took betwen ten and fifteen minutes to travel the last few hundred metres to the station. There was a lady seated opposite me who was going to be late picking her child up from daycare and have to pay a penalty—more, I think, than her parking would have cost.

Presumably the bus dispatchers knew about this problem, and the first time it happened two things should have been done. Vicroads should have been told to throttle traffic upstream/downstream on the Dingley Bypass using the traffic light management system for the duration of the shutdown, thereby discouraging traffic. And a reserved lane should have been put in for the buses from Thomas St. to Moorabbin with barricades or whatever was necessary at the Moorabbin end to feed it into the bus bay. No one even bothered to remove the 2hr public parking from that little service road—one of the buses I was on had to wait for a car to flat park!