This plan got splashed onto the Age front page on Friday:

Of course if you were paying very, very careful attention, this wasn’t a complete surprise. The eventual shift of Geelong trains back to Newport and the Metro 2 tunnel was included in a document leaked in 2018, and has been floating around as a way of helping capacity constraints for the proposed Airport line. 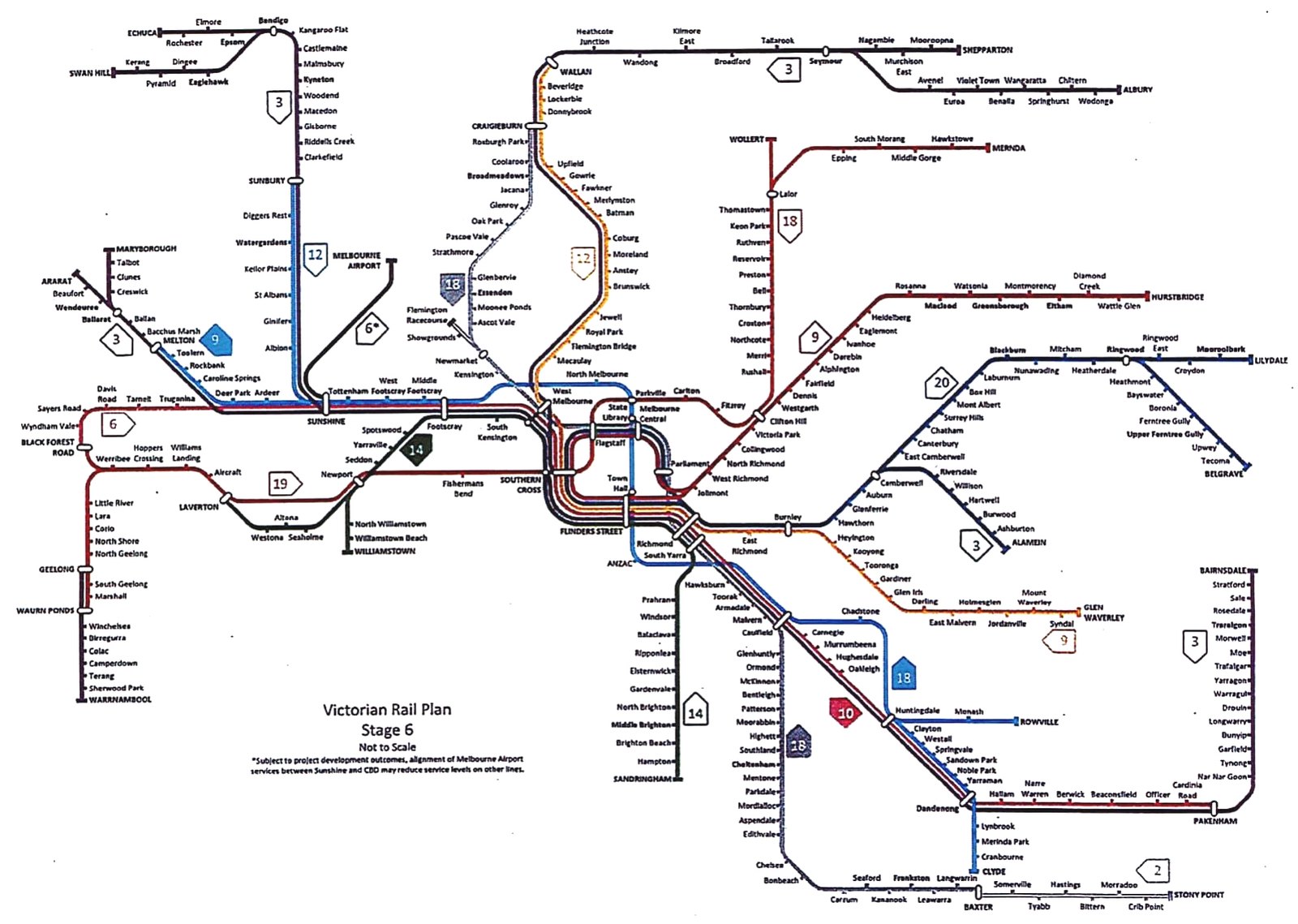 So what do we know? Nobody official is willing to speak on-the-record, but as far as I can make out, the proposal is:

What about other lines?

This proposed change would mean Wyndham Vale and Tarneit would be served by local services – hopefully electrified along with the Melton line (and separate Ballarat express tracks) to provide higher frequency, higher capacity trains than at present.

The Werribee line could be extended slightly to provide interchange with the Wyndham Vale line, assisting connectivity.

(It’s unclear how the Suburban Rail Loop would interact with the Wyndham Vale line given SRL is meant to be a standalone railway. My view is the SRL, when eventually built, should go by a completely different route, helping to spark transit-oriented development in the outer west.)

Long distance Warrnambool trains would either need to terminate in Geelong, requiring passengers to change services, or run to Melbourne on the aboveground line via Wyndham Vale and Sunshine.

How fast would it be from Geelong to Melbourne?

The fastest current inbound service is scheduled to take 58 minutes – the 7:50am from Geelong, stops at North Geelong, North Shore, Corio, Lara, then express to Wyndham Vale, express to Sunshine, Footscray, Southern Cross. But most inbound trains take around 70 minutes, with more stations served.

Let’s assume trains with similar patterns instead will stop at Werribee (for connections) then two stops in Fishermans Bend and then Southern Cross, and assume they could maintain a maximum speed of 160 km/h as far as Newport, then 80 in the tunnel.

The are a few disadvantages of course.

What have I missed?

I’m sure the debate will continue between the merits of a Sunshine to City tunnel against other proposals, including Geelong via Metro 2.

Some of the arguments coming from the Committee for Ballarat are a little odd – including repeated claims that their trains get caught behind slow Metro services – something that hasn’t happened since 2015 when RRL opened.

Compared with the Sunshine tunnel proposal, a key advantage of Metro 2 is that it doesn’t just parallel existing tracks – it expands the footprint of the heavy rail network, which is why I think it’s a better plan.

For these expensive projects, the more boxes they tick, the better.

11 replies on “Geelong via Fishermans Bend?”

I would argue that quadruplication of the Regional Rail Link route from Deer Park to Wyndham Vale would be easier because it was explicitly designed for it.

The Werribee line between Newport and Werribee was built 150 years ago as a single track railway, with a second and third track later added, along with ad hoc grade separations and infill stations.

Is there any existing regulation that stops trains from going faster than 160 km/h? It seems no services in Australia would exceed this number in any regular service even if they’re capable of going faster.

This is obviously an extremely good deal for Geelong area passengers but I fear a less-than-ideal outcome for Werribee and Wyndham Vale suburbans.

Presently Geelong peak services operate around 6tph excluding WV short runs. That would be a minimum level of service for any new route and 10tph would not be unreasonable to hope for at some point in the useful life of the tunnel (say by 2050).

The merging and stabling moves mean a peak core capacity of about 24tph. That leaves 14tph for Werribee-Mernda stoppers. Is that enough by 2050? I’d argue not if you want a balanced service with sensible capacity to the north-east. PTV thought 15tph to Mernda was reasonable by 2027.

So I reckon you’d have a pretty constrained piece of infrastructure pretty quickly.

Compare that to a Sunshine tunnel AND Metro 2 – Geelong comfortably sharing with a 6tph airport and 4tph Ballarat, Werribee and Mernda free to grow.

From that point of view the Sunshine tunnel is more urgent; the present 13tph through Newport and 15tph through Clifton Hill can be improved enough for another decade or so with signalling-type interventions. Sunshine, with 2x 18tph once you add an airport train? Not so much.

If done with any long-term thinking,

Metro 2 would be 4 tunnels. 2 for Werribee (or extended to Lara) and 2 for Geelong (express Nth Geelong – Lara – Newport – SXS).

This would allow for Geelong services to be through-routed to Ballarat/Bendigo/Airport/Seymour. If anyone is familiar with the RER network in Paris, they have 5 Lines (A through E) which carry pasengers from the commuter regions with a few stops that cross the city.

The distances for Victoria would be larger, so the speed of trains faster.

As for Bi-Modal. UK already has the solution. Class 800/802 is bi-modal, built by Hitatchi and has a top speed of 200km/hr in either mode.

Melbourne Metro #2, and most of the other detail, are all proposals put forward by the ‘Rail Futures Institute’, and are part of their recently released plans called the ‘THE MELBOURNE RAIL PLAN 2020-2050’, and you can see more about it via the following link.

Before I close, may I wish everybody a Merry Christmas, and a happy new year.

I don’t know if Sunshine to City tunnel or Geelong via Metro 2 (or some option) represents the best value for money. No matter which option is selected, I really hope that a long term plan is developed and most importantly – followed (even after a change of government).

For example, if the Sunshine to City tunnel is chosen:

When the plan is being developed, they should:

1) Have clearly defined objectives – what capacity, frequency and speed are they targeting for each line / branch.
2) Seek to maximise utilisation and efficiency of existing infrastructure before looking to build new infrastructure.
3) Maximise the cost/benefit ratio – e.g. is it more cost effective to extend platforms / increase number of carriages per train, or spend $10bn on new tunnels?

@ John.S
Who is going to pay for that?
Why is that much capacity required?

Capacity aside, the tunnel to Sunshine provides zero increase in access to rail to untouched areas. The tunnel to Newport provides rail access to thousands at Fisherman’s Bend.

It’s not a real solution for high-speed rail, but more a question of how integrated Geelong is with the Metro system when it shares suburban space and possibly transits through the city.

I put the stopwatch to my morning train the other day from Footscray to Geelong. It took 50 minutes – 4 minutes of that was spent stopped at stations, so the trains could be 10% quicker if they didn’t stop anywhere! Average speed over the whole journey while the train is moving is 99km/h, but gets up to an average of 137km/h between Wyndham Vale and Lara. A train that could average that speed over the whole journey could do Footscray to Geelong in under 40 minutes with stops. So is it a matter of infrastructure that can do these sort of speeds for more of the journey?

The Warrnambool train runs express to Geelong from Footscray – still takes a locomotive-hauled train 52 minutes to do that, at an average speed of 87km/h. Still a bit quicker than The Flyer, which averaged only 80km/h.

There could be merit in having express trains from Geelong that, say, only stopped at Lara, Werribee and Newport, via a new line, and stopping all stations that went via Wyndham Vale. If you had a 10-minute frequency between the city and Wyndham Vale, every second train could continue to Geelong at the current frequency, and be supplemented by express trains via the Werribee corridor maybe every 20 minutes.

The current Geelong line is trying to do three things: (A) trunk route between Geelong and Melbourne (very few services actually do this – e.g. the afternoon service that stops Footscray, Sunshine and North Geelong, taking 50 minutes SCS to Geelong – averaging 121km/h between Sunshine and North Geelong, but still less than 100km/h for the whole trip); (B) Geelong Metro between Waurn Ponds and Lara, which really needs the duplication beyond Geelong, with potential expansion to Torquay via Armstrong’s Creek; (C) suburban services for Wyndham Vale, Tarneit and Deer Park (and the poor relation to rail, Ardeer), which requires quadruplication and electrification.

Looking at this diagram I notice that the Tarneit / Black Forest line only has 6 peak tph, this is not going to be anywhere near enough, housing is popping up in the west like mushrooms. 6 tph will be inadequate, but can’t see how you can shoehorn in anymore trains without a tunnel or extra line somewhere.
Also recently saw some fantasy metro map that made used the Kingsville rail corridor to Sunshine for western metro services, seemed a good idea and a under-utilised opportunity that never seems to be mentioned, any reason for that?

[…] I’m told this project should be considered the first stage of upgrades for Geelong. Later stages would be aimed at further boosting capacity and reducing travel times, and could include upgrades to the Geelong to Werribee stretch, and potentially ultimately building Metro 2 to run (electrified) Geelong and Werribee trains direct into the City via Fishermans Bend. […]