But as a public transport advocate, I embrace big sporting events, because it’s amazing the things they can help get done in transport.

This is only natural. Such events are often a showcase, particularly in Melbourne, and governments are keen to ensure they can get spectators in and out of the arena/venue as efficiently as possible, and while ensuring that the rest of the city continues to function.

When a hundred thousand people need to converge on a venue, you don’t want to be doing that with private vehicles. 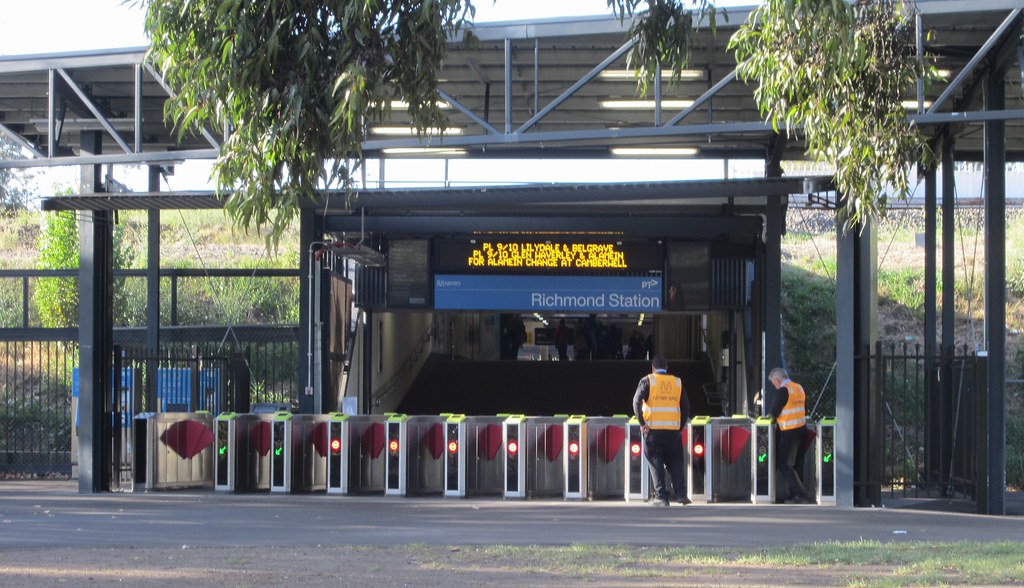 This isn’t new. Historically, all of Melbourne’s football grounds and racecourses were close to railway stations. (Yes, even Princes Park, and the Brunswick Street oval in Fitzroy. No, not VFL Park.) But I’m thinking of bigger events than just regular football or cricket.

Just as events such as the Olympics leave “legacy” infrastructure, sometimes big events have helped to shake up public transport services.

The Melbourne Formula 1 Grand Prix started in 1996. Someone twigged that the then Sunday timetable of trains every 40 minutes on most lines wasn’t going to cut it, and they instead ran Saturday timetables (every 20 minutes) on GP day. Double the usual train frequency? Unheard of!

Subsequently in July 1999, 20 minutes became the standard Sunday train frequency between 11am and 7pm.

Up in Brisbane, for the 2018 Commonwealth Games they got a tram network extension built in time for the event, with trams running 24/7. The Brisbane Queen Street bus interchange was refurbished. And they ran the Gold Coast rail line 24/7, including 6 or more trains per hour most of the day. Mind you, it was at the expense of some other rail lines.

Speaking of the Commonwealth Games, let me focus on Melbourne 2006. 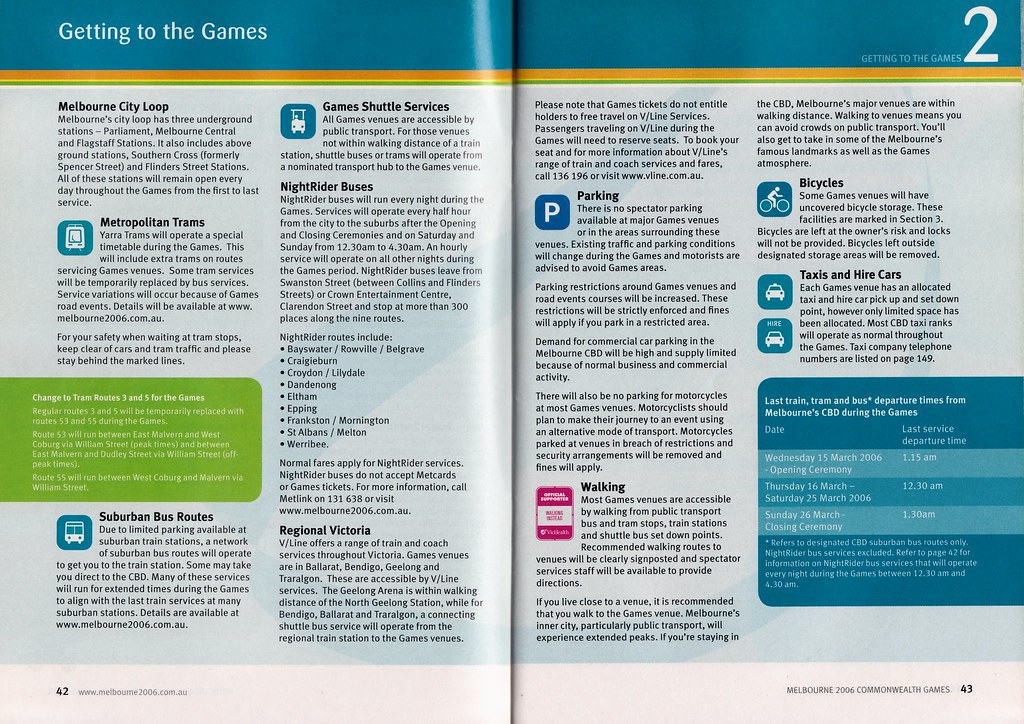 A raft of temporary public transport upgrades were brought in to help people get to venues, and some of them were subsequently made permanent.

Suburban public transport was included free with all event tickets, which also allowed discounted V/Line travel. PTV has a mechanism for free PT with event tickets as part of their event planning, though it’s not often used outside hosting big international conferences.

Evening trains ran every 20 minutes on all lines (normally 30 minutes) to encourage people to travel after the PM peak — subsequently many lines have been upgraded permanently until about 9:30pm

6-car trains ran from first to last train — at the time, most evening and weekend trains were 3-cars, but 6 is now standard. The new HCMT fleet is being built without intermediate driver cabs, which will allow more passenger space.

Trams and trains were extended to 12:30am every night — later in 2006 as part of MOTC, services were extended permanently to 1am on Friday and Saturday nights, and more recently all night on some trams and all trains, which also fixed issues with Sunday trains starting too late for fun runs.

10 City bus routes ran extended hours, including the services that subsequently got upgraded to the DART Smartbus routes.

51 suburban bus routes extended to around 1am on weeknights to meet trains until the last service, to help relieve suburban station carparks

Nightrider buses ran every night of the week, not just during weekends.

Note the confusing wording in the official publication shown above — “Normal fares apply for Nightrider services” but also “Nightrider buses do not accept Metcards.” Most people would read “normal fares” as standard tickets, but I think what they meant was that old premium fares applied, though other information clarified that Games tickets included Nightrider travel. Later changes introduced standard Metcard fares for Nightrider, and nowadays, standard Myki fares apply to weekend Night Network services.

Authorities postponed retiring some old Hitachi trains – for pretty much the first time it was recognised that the fleet had to grow. Memorably they ended up buying some back from a collector.

Importantly, there was no car parking at venues, including the MCG. Many would still like to see this happen.

"The offset would amount to taking 50,000 cars off the road for a month"
– you know what would take *actual* cars off the road? Banning parking in Yarra Park. How about it, @mcg? #YarraParkNotYarraCarpark 🏞️🏟️🚉 https://t.co/h5W9UXajGe

Some upgrades like these can’t easily be made permanent, at least not immediately, because they stretch the assets and staff too much.

But these types temporary changes prove what is possible.

The PTV Annual Report notes more than 1100 special events in 2016-17 — and as in any big city, these are alongside smaller everyday events and activities that don’t make the headlines. 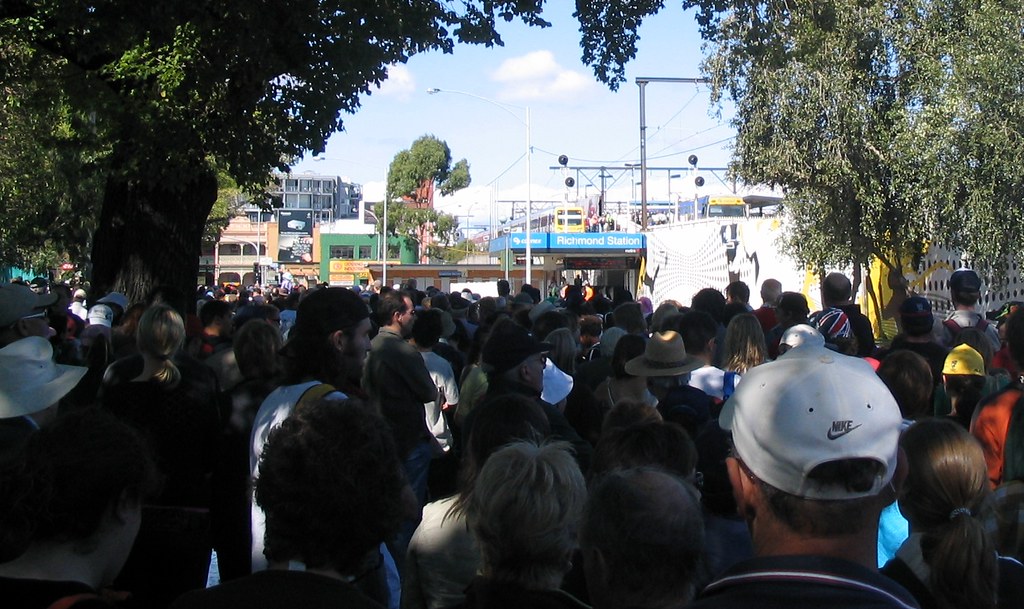 Getting occasional users on board

Big attractions get occasional users onto public transport, using the system to avoid event traffic snarls and car park hassles, even if those people normally drive everywhere else.

An ABS survey from 2011 showed that 38% of Melburnians had used public transport in the last month — far higher than the typical metropolitan-wide mode share (18% for Journey To Work), indicating a lot of people use it for some trips, but not necessarily their daily commute. Part of that would be attending events.

Occasional use like this means more people become familiar with using the system: how and where their most convenient station is, how to use a Myki card, and indeed more likely to have a Myki card in their wallet — the Herald Sun reported in January that there are 15 million active cards out there. This means one barrier to switching to public transport more often is gone.

I'm not really into horse racing🏇, but I'm quite fond of the ritual of the beautiful people catching trains to the racecourse.🚆 pic.twitter.com/Q20ERunLaA

How significant this is, I’m not sure, but it’s interesting that the huge upturn in Melbourne’s public transport use last decade occurred pretty much straight after the Commonwealth Games.

Alongside other events such as New Years Eve, it added to the sense that public transport is of huge benefit to mainstream society, and is worth investing in.

Extra event services (when they supplement, rather than disrupt/replace regular services) can help all passengers by cutting waiting times and relieving crowding… though any regular footy goer will tell you that in many cases they need to further improve service frequencies and crowd control.

And in the longer term? While regular commuters may be grumpy at occasionally sharing their crowded train with footy fans, big events can be a catalyst for upgrades, ultimately helping in the quest for a better public transport network for everyone.

Daniel
I agree with your observation that major events motivated the authorities to improve PT and this was embraced by the public who kept using PT beyond the major event. A good blog, thanks
I know lots of people who rarely use PT but wouldn’t dream of driving to the MCG for a footy match.
I also wonder if the big increase in 60+ folk who use Seniors Card also is having an impact on PT numbers.

Another hidden PT manoeuvre of the Comm Games in Melbourne was the “strategic rail reserve”, where a handful of buses and drivers were placed a key railway stations from 0600-0000 each day of the games in the event that the rail network had an issue and required immediate bus replacements- which is, let’s face, not unheard of.

I was one of those drivers. And I sat at a particular railway station for 9 hours or so a day waiting for something to happen. Nothing ever did. But I got some good reading done, nattered to other drivers and generally waited with thinning patience. It was a good earner, but very boring work. Still, a great idea for those peak of peak kind of days where there is high level event movement, something like Spring Racing Carnival, New Years Eve, etc etc.

Fun fact: we were there at 0600 on Sunday, even though first train through that station wasn’t until nearly 0900!