Forty years ago this week (on Christmas Eve to be precise) the first Hitachi train went into service.

Here’s an article and some blueprints published in the Victorian Railways internal newsletter in June 1970, showing off models of the then-proposed trains. 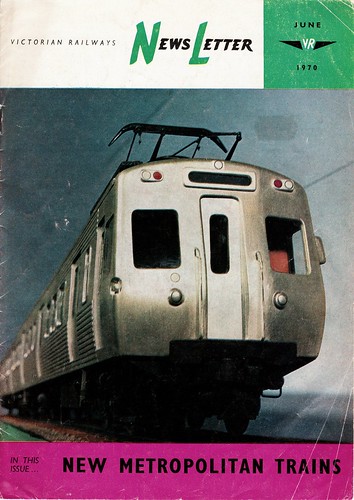 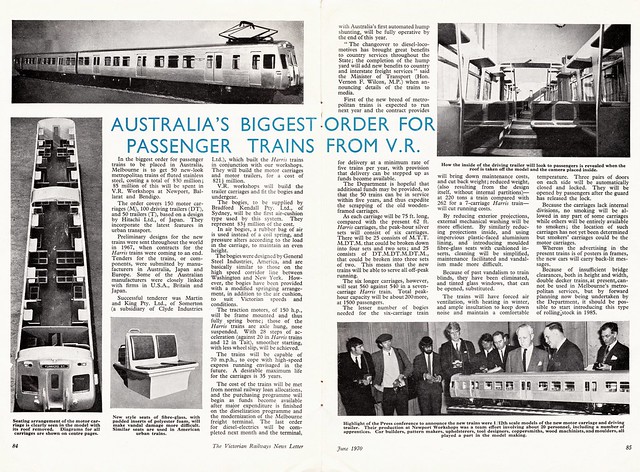 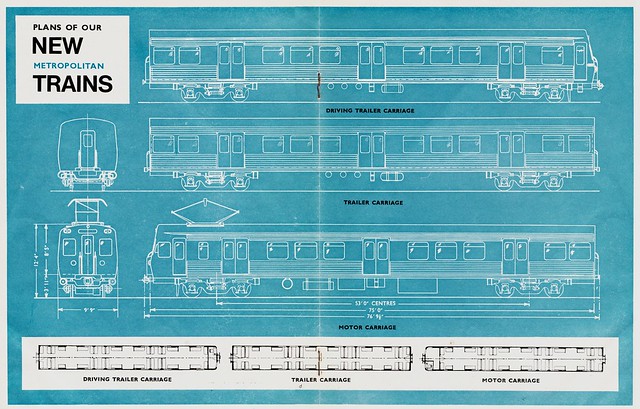 The “driving trailer” carriages were later converted to trailer carriages, with additional motor carriages built to make up the 3-car sets we see today.

Most Hitachis were scrapped during the 2000s, when it was originally thought they would be completely replaced by Siemens and X’Trapolis trains. Initially a few were kept for the Commonwealth Games, to be scrapped afterwards, but strong growth patronage meant they were saved, and some others brought back — famously some were bought back off a collector who had purchased some and kept them on his farm.

They don’t have air-conditioning and passenger intercoms, but are otherwise known for being a pretty reliable train. Air-con only really matters a few days a year anyway — on all except the very hot days, opening the windows does wonders. It’s far more important that they be around to relieve overcrowding. If you’d rather not travel in a Hitachi on a hot day, you’ve always got the option of waiting and catching the next train.

(With thanks to Chris G for the tipoff)

re Roderick Smith’s photos… ah the 70s, when brown was the colour of choice for EVERYTHING!

When did they remove the parcel racks from those trains? That would be handy on trains even today! It is annoying when someone has a large breifcase and insists on wedging it between the seats of in the foot area.

Interesting data that supports the crush capacity listed in the table in your previous blog entry on train capacities – “Total peak hour capacity will be … 1500”.

None of this pussyfooting 798 that we now think constitues a full train.

Umm… In the first of Roderick’s photos, is that man picking a wedgie???

John, when the luggage racks were removed, the reason given at the time was that no one used them. yes, it’s annoying when people’s stuff takes up so much room.

Does anyone have any idea when they phased out the smoking carriages? It seems such a strange concept these days. Also, when did they get rid of the carpeting? That seems like a horrendous idea for an urban train system.

I can vaguely remember carpet in some trains from when I was a teenager in the early/mid 90’s. Back when teenagers would gather and sit on the floor in the doorways with their giant Country Road duffel bags, wearing flannel shirts and Doc Martens. On the manky carpet. Kinda like sitting on the floor of a nightclub.. Ew.

@jen, except everything that was bright orange. It must have been a terrible era to work for dulux.

@julian. It wasn’t phased out. It was totally banned on all Victorian government owned public transport on 15 November 1976 (well, the carriage part anyway). Previously the motor cars were smoking and the trailer cars were non-smoking.

They remain the most comfortable trains because of the well padded seats, open aisles and absence of air conditioning roar. They also have dark tinted windows which really cut the heat gain from the sun. And with the opening windows, they’re pretty good even when it’s 30 degrees outside.

on saturday, 26-1-2013, whilst i drove through the Metro area of Newport (next to the steamrail sheds} workshops, there are two Hitachi trains, graffitti on them, with their PANTOs TIED UP. I gather this means they have withdrawn and a transfer to somewhere will probably take place. Does any one have info on the final withdawal of the remainder of these trains, looks like pretty soon to me.