M wanted to see the Lady And The Unicorn tapestries before they head home to France from their exhibit at the Art Gallery of New South Wales.

No big holiday likely this year, so how about we do a short break in Sydney?

After looking at frequent flyer points on Virgin, mostly from last year’s Europe trip, we went ahead and booked.

Sydney to Melbourne down on Sunday afternoon. No FF Economy seats available between about 10am (bleugh, too early) and 6pm (bleugh, too late).

Wait a sec – they have some business class seats available at 3pm. That could work. 23,500 points. M had enough, and I almost had enough – a small shortfall could be paid with $20.

Okay. M went onto the web site. Choose one of the eight available Business Class seats on the plane. Click. Booked. Great.

I went onto the web site. Click. Error. No more seats available.

Yep you guessed it — they only allowed one of the seats to be booked by Frequent Flying freeloaders. Perhaps to prevent people flying together in Business on points.

So I ended up a later flight home — 90 minutes later. Oh well. Time to sit in the lounge and write this blog.

We planned to head to the airport straight after work.

Given the challenges of Melbourne traffic, I was thinking of opting-out of the Skybus ($18) and instead doing the cheapskate option: train to Broadmeadows, 901 bus to the Airport (effectively free, since I already have a yearly Myki Pass).

Slower? Probably; it takes about 50-60 minutes depending on the connection. But it avoids the traffic, which Skybus would be likely to get stuck in.

Checking the PTV network status shortly before leaving, the trains were running okay, but the buses… A look at the real-time departure information showed uneven frequencies, and there was a delay flagged… due to a landslide in Fitzsimons Lane in Templestowe. 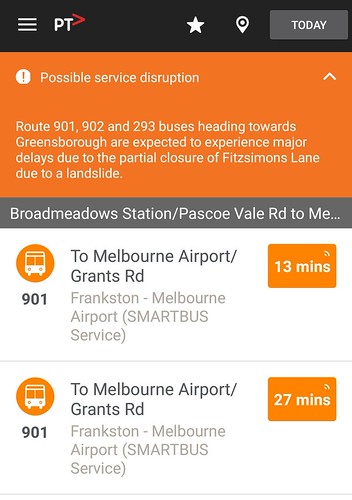 So we ended up on the Skybus instead, which was busy, but no waiting at all.

Have you ever noticed how when you approach Southern Cross Station from Bourke Street, the sign for Skybus, one of the things that occasional visitors are most likely to be looking for, is behind a pillar? 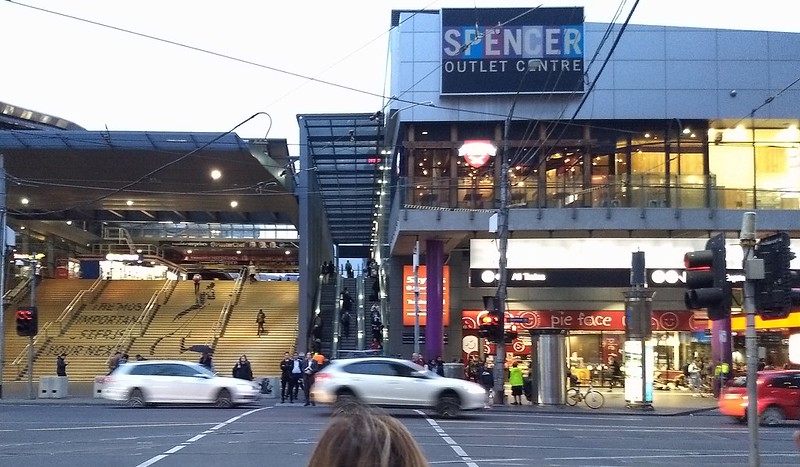 As I suspected, Skybus was faster than via Broadmeadows, but not my much. The Citylink transit lanes should give the buses a good run, but don’t – presumably because they’re not enforced.

Been going for 20 mins so far. Traffic crawling at Pascoe Vale.
Are all these vehicles meant to be in the Transit Lane? No? Not much of a Transit Lane then is it.🚗🚗🚗🚗🚗🚃😡 #skybus pic.twitter.com/gVuYPiHVD8

It took 42 minutes to get to the first stop at the airport.

No wonder Skybus no longer claim a 20 minute journey time.

Perhaps those new lanes opening soon will help… for a little while.

But really, if they have a priority transit lane, they should use it properly. Of course it doesn’t help that both Transurban (Citylink) and the Airport are lobbying against bus priority. Evidently they really want to cater for vehicles, not people. 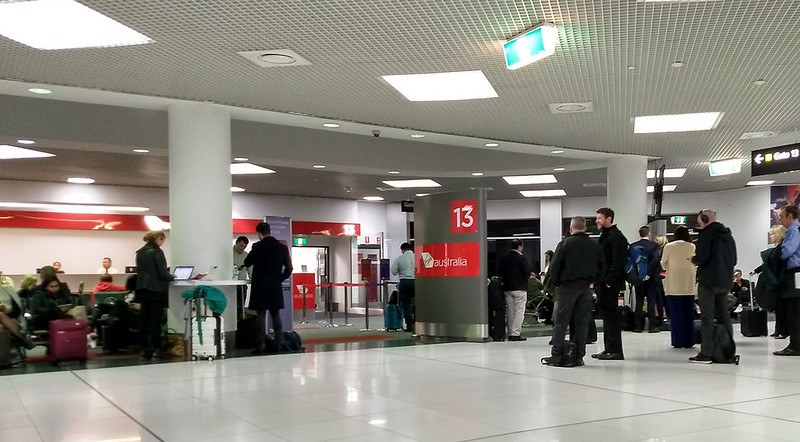 The flight? It must have been an omen that our departure got switched to Gate 13, but at least Terminal 4 has improved in the last few years.

Delayed about half an hour, so we got into Sydney well after 9pm.

Smooth other than the delay. I got time to ponder why they give out copies of The Australian, which being a broadsheet is clearly completely unsuited to reading in a plane, at least in an Economy-class seat. 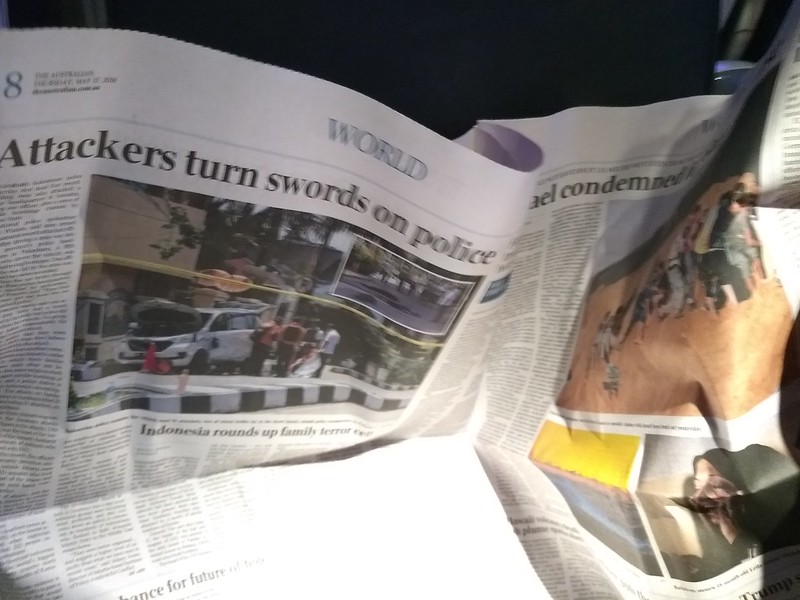 And the train from the airport?

Instead of a smooth 16 minutes straight from the Domestic Airport station to St James (at least as quick as a cab), due to trackwork we had to change trains at Central (up and down steps; there’s only one lift per platform), then catch a train the long way around the City Circle, so it took about half an hour all up (about as quick as a cab in peak hour).

On the bright side, the view of the Harbour Bridge from Circular Quay station is a nice welcome to Sydney. 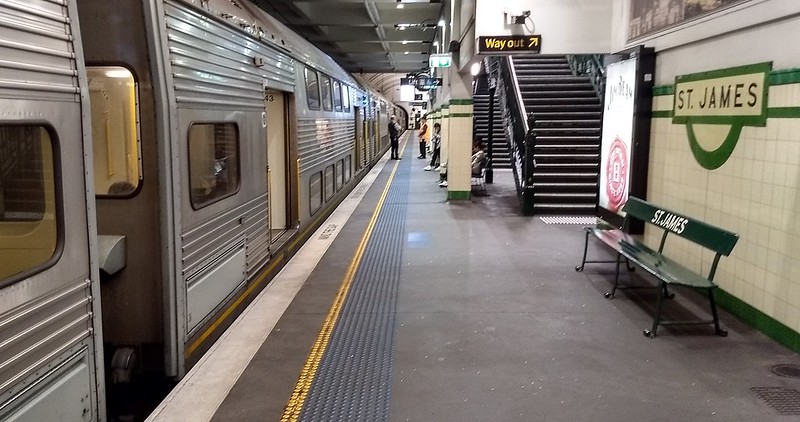 The hotel was a level of luxury to which I’m not really accustomed.

I usually book for location first, then price, then amenity. I like to be near to a busy railway station so we can use the hotel as a base, and stop past between activities.

There was a good deal at the Sheraton on the Park, near St James station, so we ended up there.

When I first started travelling in my 20s, I tended to stay at Youth Hostels for budgetary reasons. It’s fair to say this is the other end of the spectrum.

As we walked up, the doorman offered to help with our bags. I declined. After pulling my wheeled suitcase all the way from my house in Melbourne, I didn’t need to pay a bloke $5 to have him take it the last 25 metres to the reception desk.

That said, if the Sheraton want to remodel their front entrance, a ramp from the direction of the station would be a plus — currently the only ramp from the street faces the opposite direction.

The room itself? Very nice. As one would expect in a nominally expensive hotel.

We hadn’t booked (and paid extra for) the park view… instead it was a “city view” which turns out to be facing onto the back side of a building in the next street.

No matter. Escaping a Melbourne weather forecast of grey and drizzly, instead getting Sydney’s sun and top temperatures of 20-21 degrees every day we’d be there? Priceless.

Picked the right weekend for a Sydney getaway 🌞👍 #winning pic.twitter.com/81AKmCfcmw

11 replies on “Mini-break in Sydney”

How do not know about the 901 option to the airport? I have been wasting money on SkyBus (well, when I haven’t been in a hurry, anyway) all these years!

There’s a transit lane on the Tulla? There’s a surprise.

A great tale. I agree the Broadmeadows train and then bus is a cheaper option, but you need to allow extras time, which can be harrowing if you’re catching a plane.
“Plenty of FF Economy seats available. 11,800 points”. – Was there a $ charge as well?

You don’t need that much extra, depending on how you go. I’ve done Southern Cross to T1 via train/901 in 50 minutes in the past, which is not much more than Skybus in peak hour.

Even quicker if you’re going to T4 since that’s where the bus stops now.

Upon reading this, I just realised that they’ve gotten rid of the 500 bus that used to go between Broadmeadows and the Airport. Was this when they introduced 901? Used to travel on the 500 to get between Sunbury and Broadmeadows.

You can usually get a Sunday afternoon flight from Sydney to Melbourne for $155.

You could have just paid and used your points another time.

You must have been very lucky. 50 minutes ?

The scheduled train time is 35 minutes, and that is only if the train to Broadmeadows is going straight from South Cross, which most of the time, it isn’t. So you have to go round the loop or catch another train to North Melbourne, and wait.

The 901 bus time from Broadmeadows to Tullamarine is a minimum of 13 minutes. Unless your timing at every point is 100% perfect, I am doubtful that 50 minutes is possible. Outbound from Melbourne, I allow 1 hr 20 minutes for the train/bus, and if I haven’t got that much leeway, I pay for the Skybus.

Inbound to Melbourne, unless in a big rush, I take the 901/train. But I know the 901 timetable, and if I have just missed one, I take the Skybus, because otherwise it can take almost 2 hours from the airport if you have to wait 25 minutes for the next 901.

Starting from King and Bourke street, right now, the transport planner is estimating 39 minutes using Skybus, with a departure every 10 minutes. ( that is including the 8 minute walk to southern cross from king street ).

It is estimating 1 hr 15 minutes for the train/901, and it appears to assume that you can do your actual departure from King Street to precisely catch the train at Southern Cross with no waiting at southern cross, which is unrealistic. If you are arriving at Southern Cross on another train or tram or any other means not entirely within your control, you’d need to factor in the possibility of 19 minutes waiting time. Which puts the expected time around an hour and a half.

I would not be betting my plane fare on a serendipitous 50 minute trip.

Checking my GPS notes for the 30 trips I have made in the last 18 months, travelling via Broadmeadows takes, on average , 42 minutes longer than the trips where I took the skybus.

The Skybus trips ranged from 22 minutes to 46 minutes, with the majority between 29 and 34 minutes. I’ve only encountered bad traffic congestion once. The 22 minute guy was actually speeding. Most of them stick very accurately to the speed limit.

Depending on which bit of the roadworks they are doing, the 901 bus can also be fairly badly affected getting off Mickleham Road onto the airport road. Not so much in the opposite direction.

[…] hotel to pick up the bags, then we headed for St James Station — drawing another bum card, as again due to works we went around the City Circle the wrong way (but hey, that Circular Quay view!!) and had to change […]