Time to head back to London for the last few days of our holiday. We packed up our stuff and left the Air BNB flat.

A word about the flat. It had been chosen for its location (walking distance to Brussels Midi/Zuid station), which along with the price, which were its best features.

The layout was curious (one bedroom on the ground floor, stairs up to a small living area/kitchen, more stairs up to a second bedroom and bathroom). Outside the living area was a courtyard, and across from there was another flat, where our host lived.

The facilities themselves were basic, and while I shouldn’t have to, I had ended up spending a few Euros to buy an extra mug and some toilet paper, as it didn’t seem our host had thought to provide enough of either. That’s okay – he was friendly enough, and like I say, it was pretty cheap. 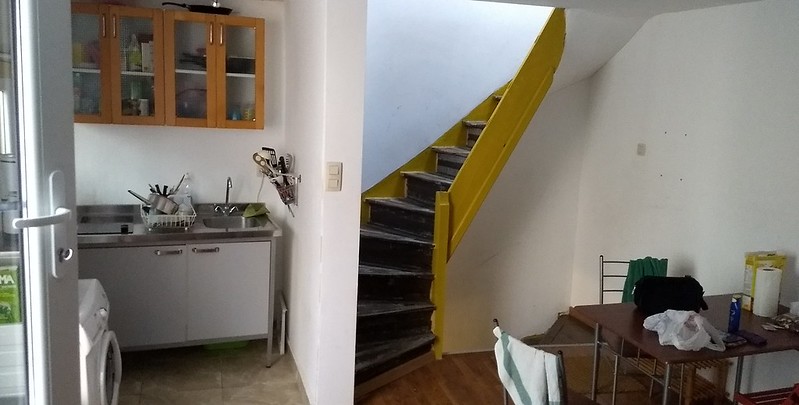 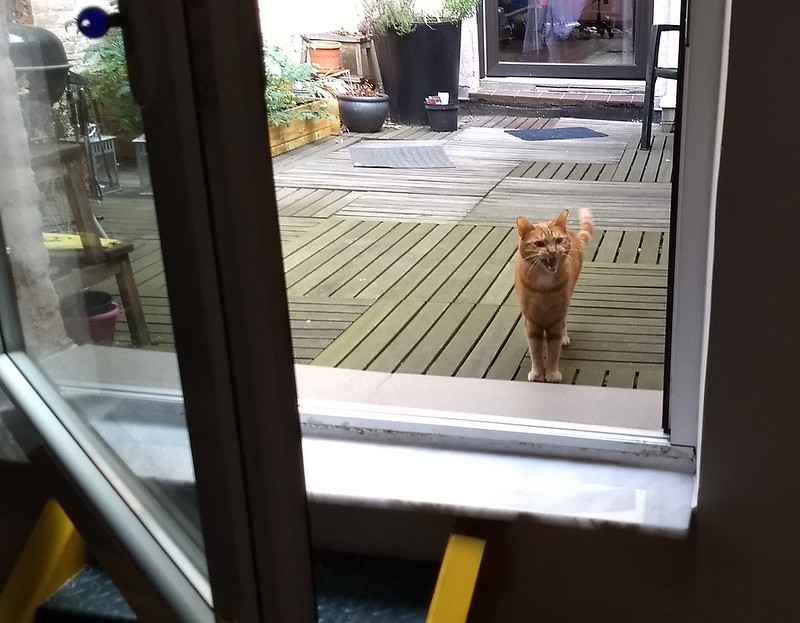 And did I mention the cat? I didn’t catch the name or the gender, but he or she would regularly drop past for pats, and was mostly friendly (friendlier than this photo would suggest!), though didn’t like being told to get off the table.

The flat may have been low budget, but it had been a great stay in Brussels. The weather had been mostly kind. We’d overcome enough of the language barrier to manage fine, and personally I found it a bit humbling having to adapt to make myself understood. It was a learning experience. And we’d got to meet my new cousin! 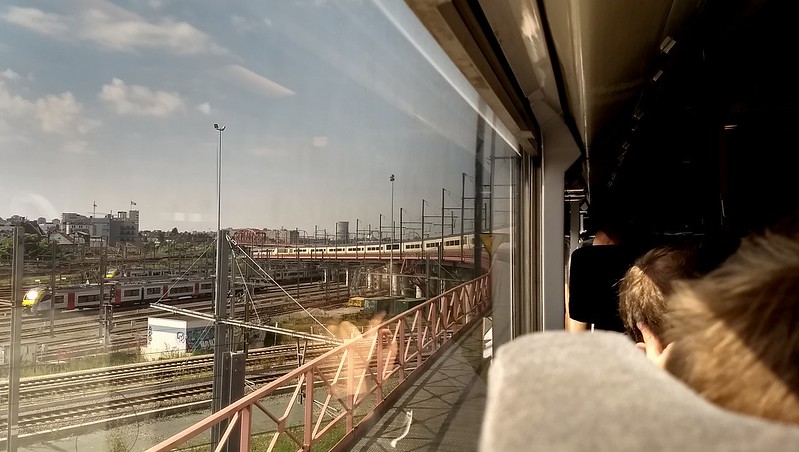 Rather than walk, we used up some of the spare rides on the Mobib ticket to catch the Metro back to Brussels Zuid/Midi/South station.

At the station, we joined the queues for admittance into the Eurostar terminal. Through bag security… through the Belgian (exit) checkpoint…

At the UK checkpoint, over on the other queue, one family group from Thailand was getting quizzed by a UK Border Force official. No such problems for us, and we got through quickly.

I’d left my bag behind. Across the border. In Belgium. Back at the security screening point.

For a split second, I actually considered simply leaving it behind. But no, that would be silly, and could cause all sorts of problems later.

Putting on my most polite, humble voice, I backtracked and told the UK official about it. He thought about it for a second, and said OK, to go back and ask his Belgian colleague. He in turn said sure go and get the bag.

It was right where I left it, thank goodness, and I grabbed it, and they waved me back across the border.

Yikes. At that point I think I’d almost had a heart attack.

OMG I'm about to board Eurostar to London; I had passed through immigration into UK when I realised I'd left one bag back in Belgium! 🇬🇧🇧🇪🎒😱

After calming down, I ducked into a shop in the departure lounge to spend the last of my Euros on some snacks to eat on the train, while M did the same with her money and bought us some coffees/hot chocolates.

The train was a few minutes late leaving – there had been some disruptions on Eurostar earlier in the day, and looking at the real-time updates, I saw one of the services head of us had been altered to not stop at Lille, in order to make up time. Yes, station skipping. 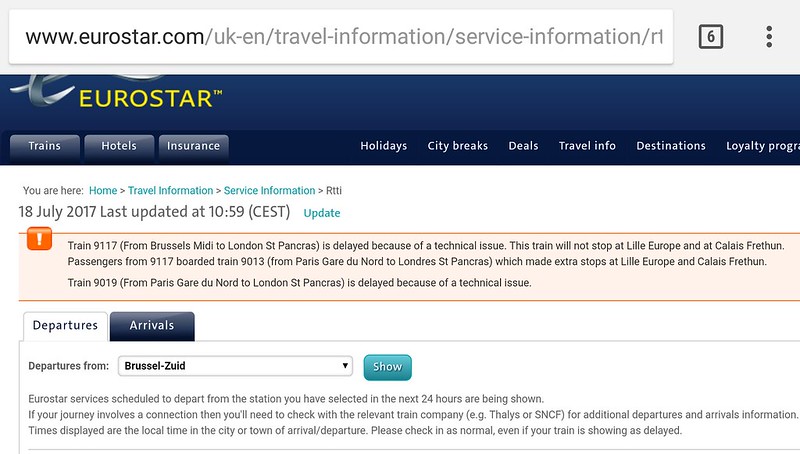 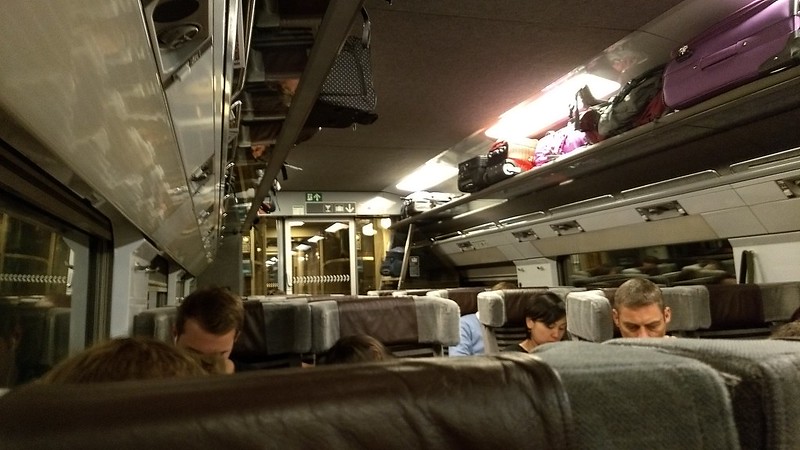 Our carriage this time was older – gunzels may be able to age it based on the fact that the interior was decorated in brown, and there was no Wi-Fi.

At least the toilet was classy. 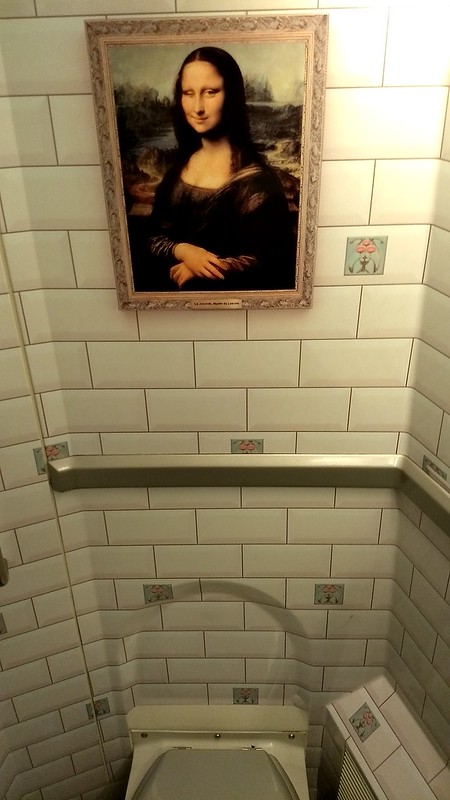 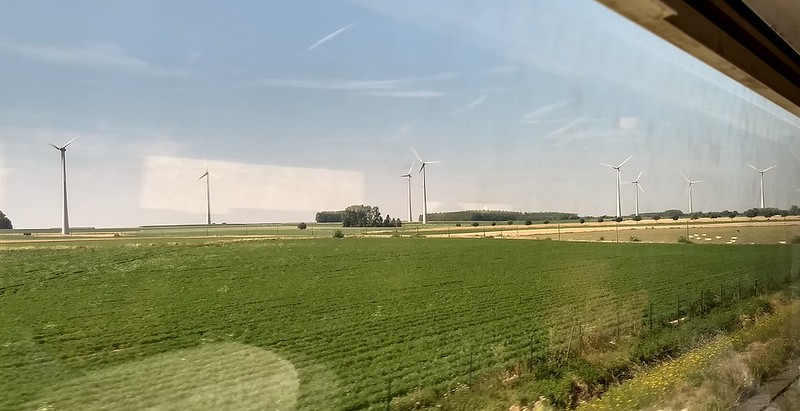 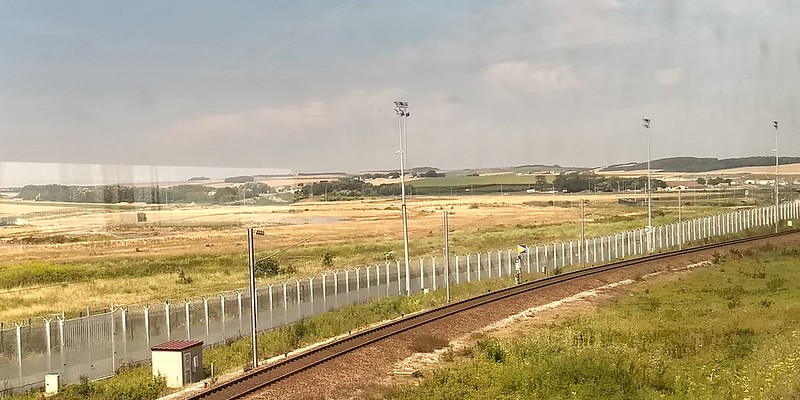 When you get near to Calais, the wind turbines in fields, and rickety fences separating the farms from the rail line give way to serious looking security, obviously designed to keep unauthorised people from getting into the tunnel and/or onto the trains.

Apparently the lineside flag in the picture above is part of the in-cab signalling system. 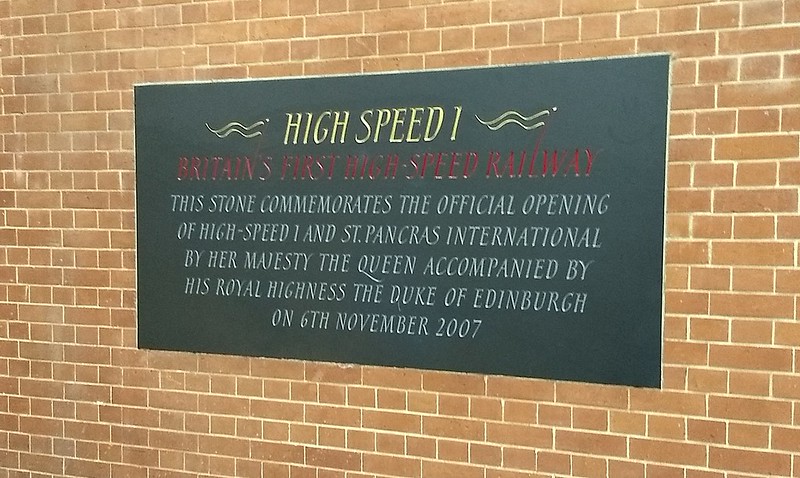 The train zipped along, and arrived in London just a few minutes late.

We’d booked another AirBNB, in west London, and headed there on the Tube – the tiny trains of the “deep tube” Piccadilly Line, with a change to the District Line along the way.

The flat was in Chiswick, near Turnham Green station, chosen for being the right side of town for a quick getaway to Heathrow later in the week, as M needed to head there earlier than the rest of us (a long story involving separate flight bookings).

This flat was less central, more expensive, but in much better condition, with much better facilities. And it was spotless. 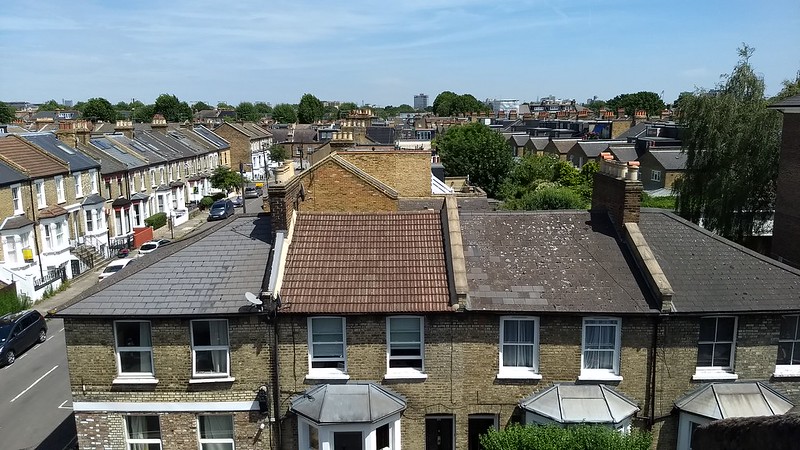 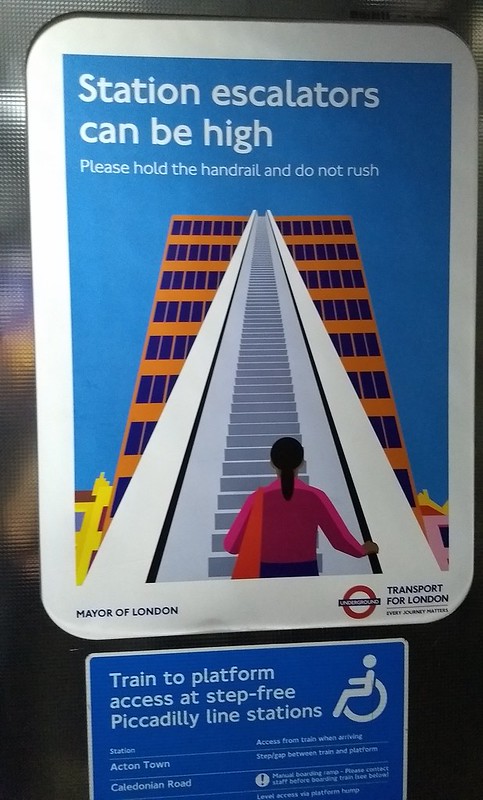 After dropping off the bags, we got some lunch in a local sandwich place in Chiswick, then caught the Tube back towards central London to explore for a bit.

First stop, Earls Court, where I+J finally got to check out the Police Box just outside the station. According to Google Maps, it’s bigger on the inside.

Personally, I was equally fascinated by the facade of the station entrance, with its beautiful signage. 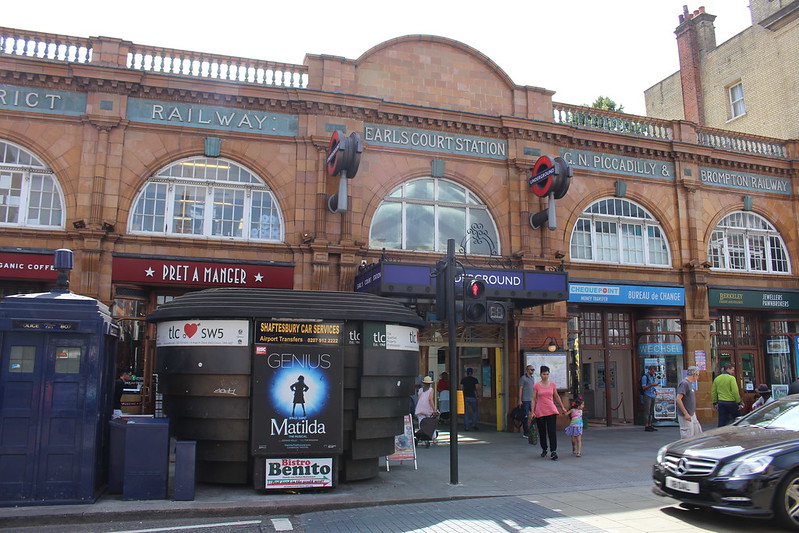 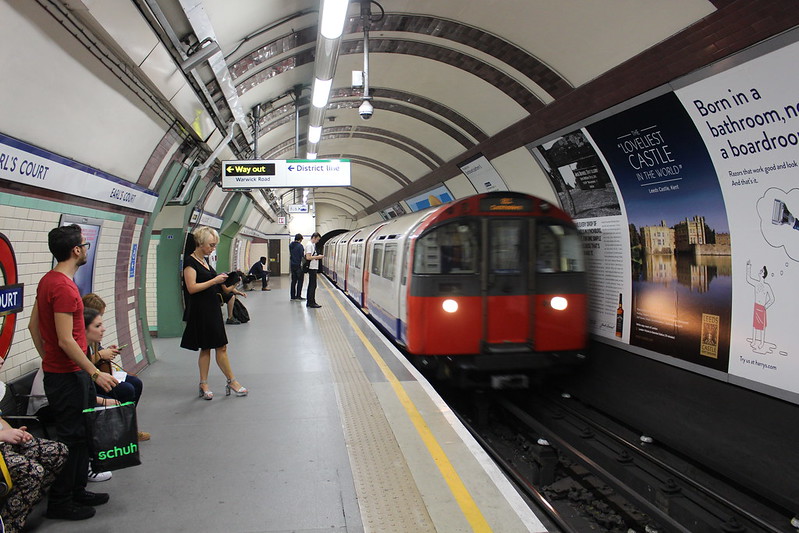 Next stop, Covent Garden, and the London Transport Museum.

The LT Museum is expensive, but for someone like me who is generally fascinated by public transport, it’s very interesting. (Tickets are actually valid for a year, so if I make it back before July 18th 2018, I can get back in.)

M wisely opted out of the museum, choosing to go for a walk instead, but the rest of us explored the museum for a bit, before we all met up again in the gift shop. 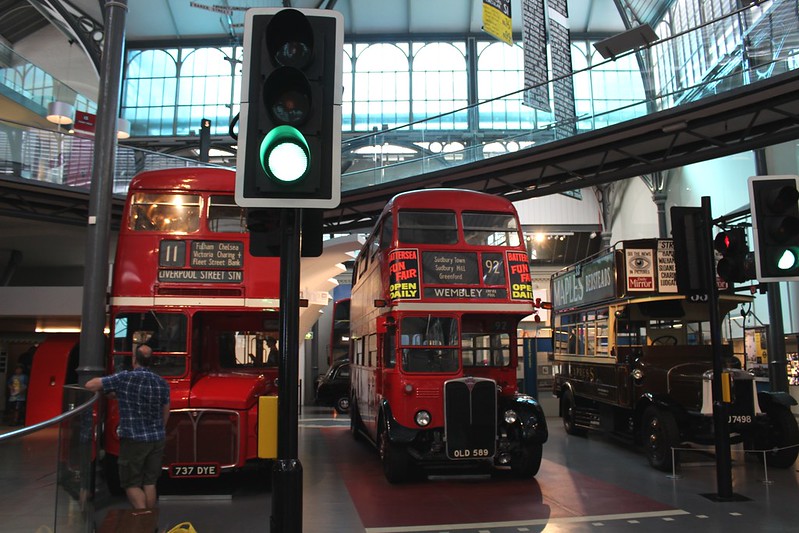 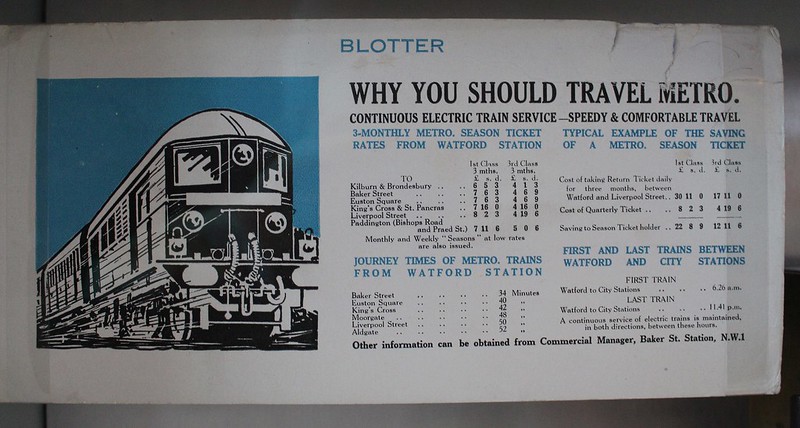 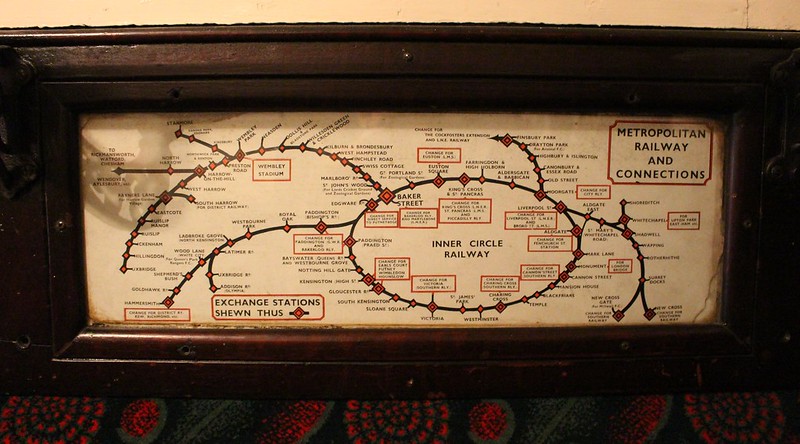 From Covent Garden we walked down towards the Thames to see what we could spot: the London Eye, Big Ben, the Houses or Parliament – all the sights. 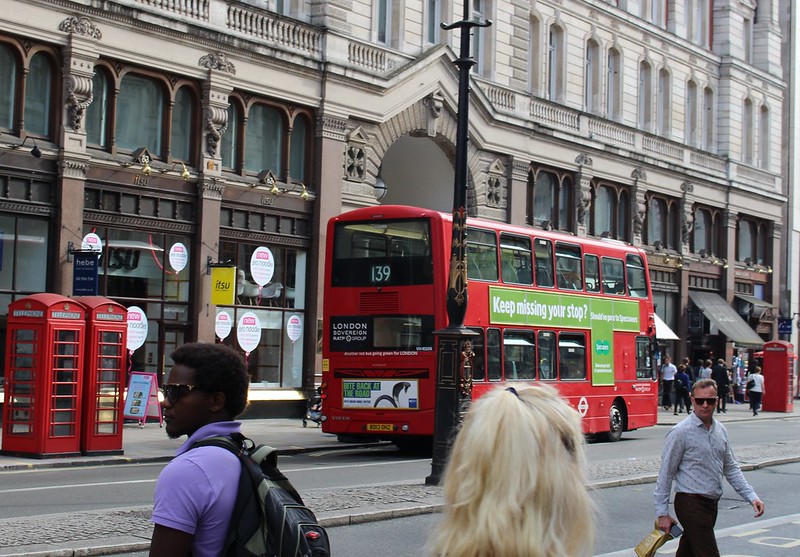 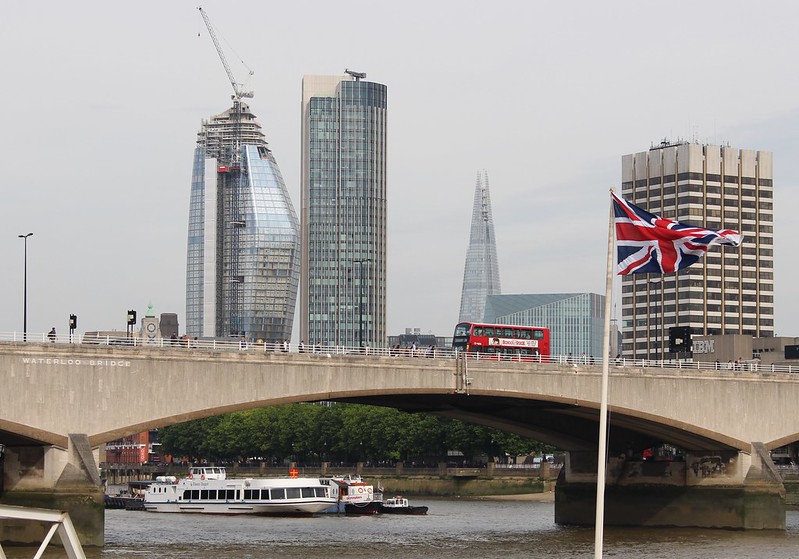 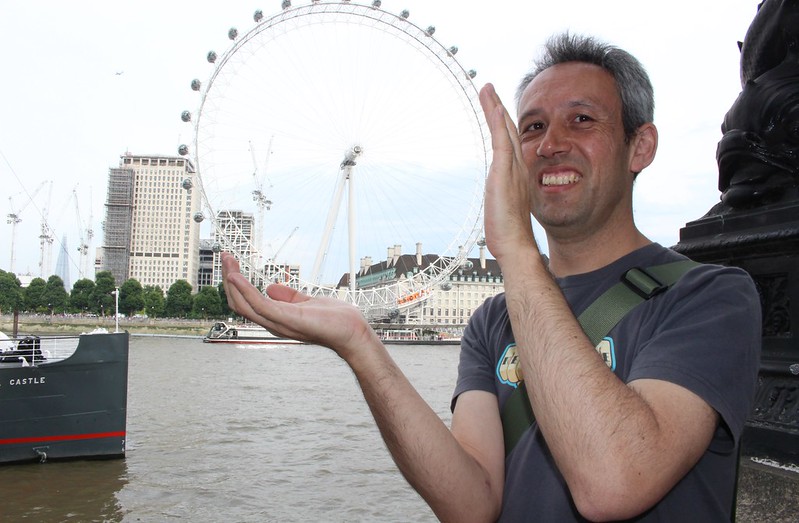 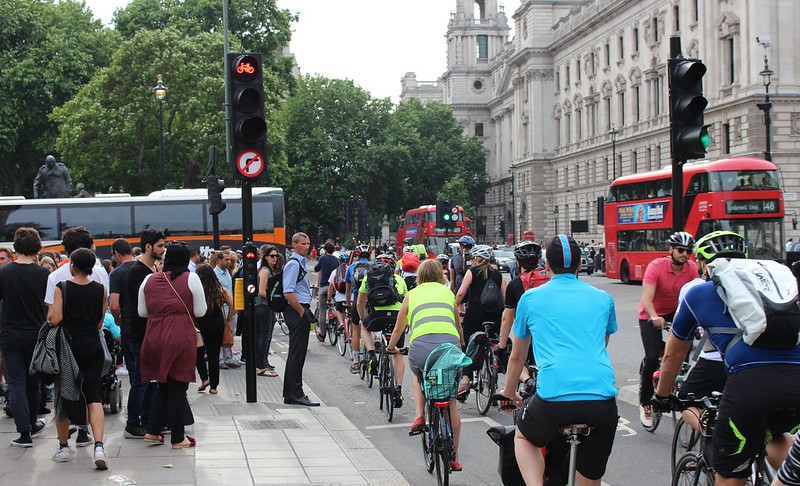 We walked west along the river. There’s one of the cycle superhighways along there, and it was rush hour by now, and incredibly busy with cyclists zooming along en masse – very impressive to see.

We spotted Cleopatra’s needle, an ancient Egyptian obelisk that is one of a set of three (the others in Paris and New York) stands out. Interestingly, despite the name, it was about 1000 years old in Cleopatra’s lifetime. 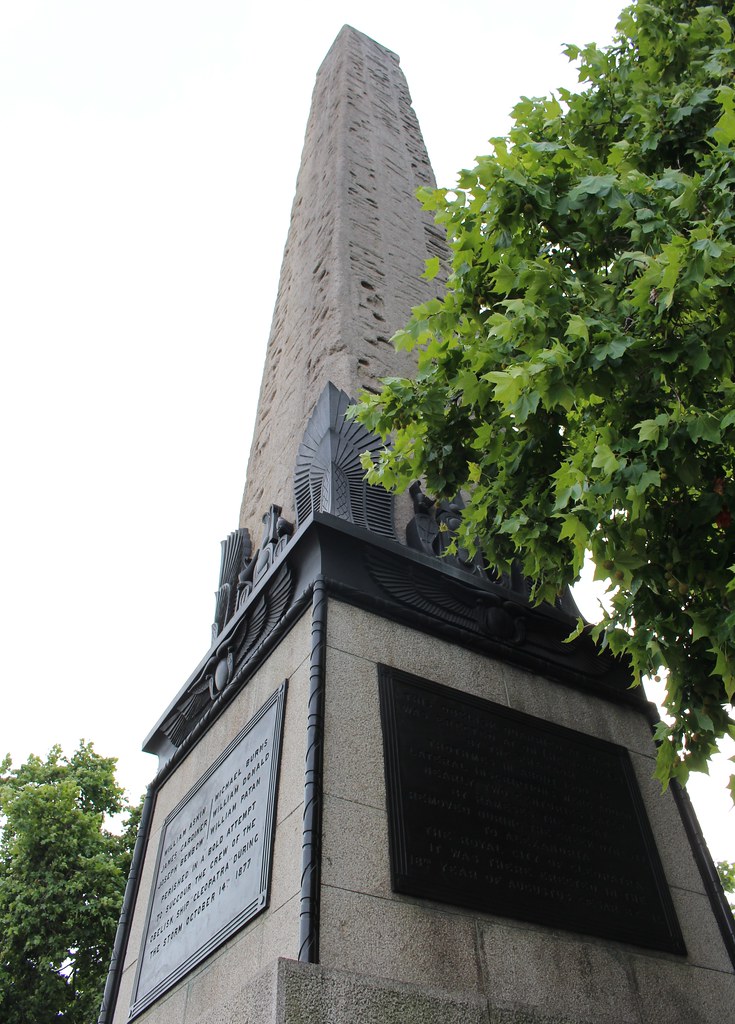 We listened out for Big Ben’s chimes – a few weeks later they would stop for some years for refurbishment of the bells. 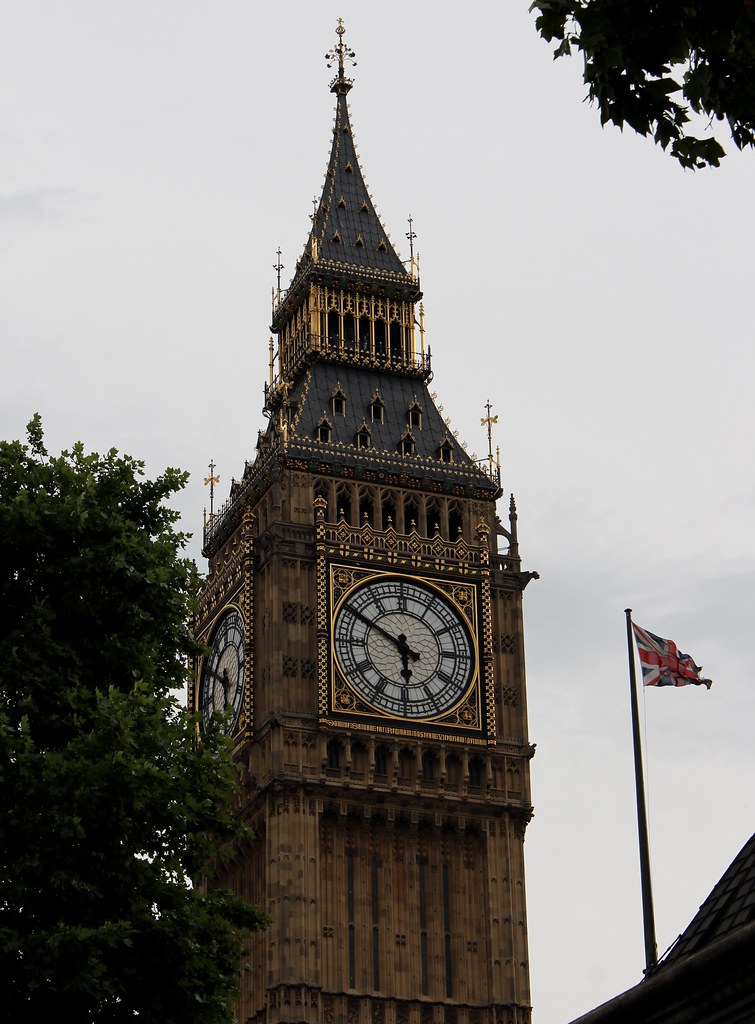 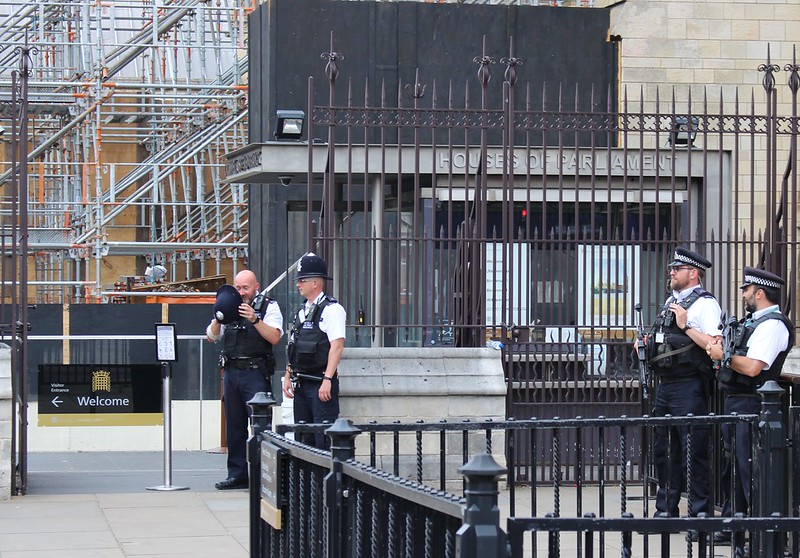 At Westminster, numerous armed police were on duty – understandable given recent events. 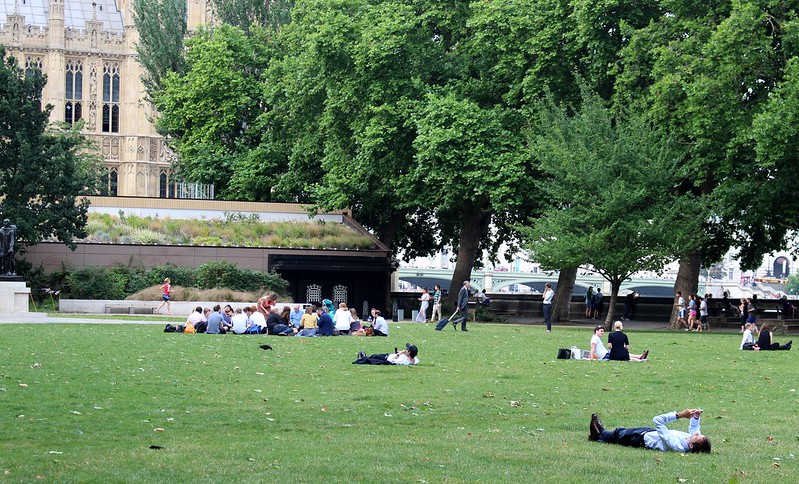 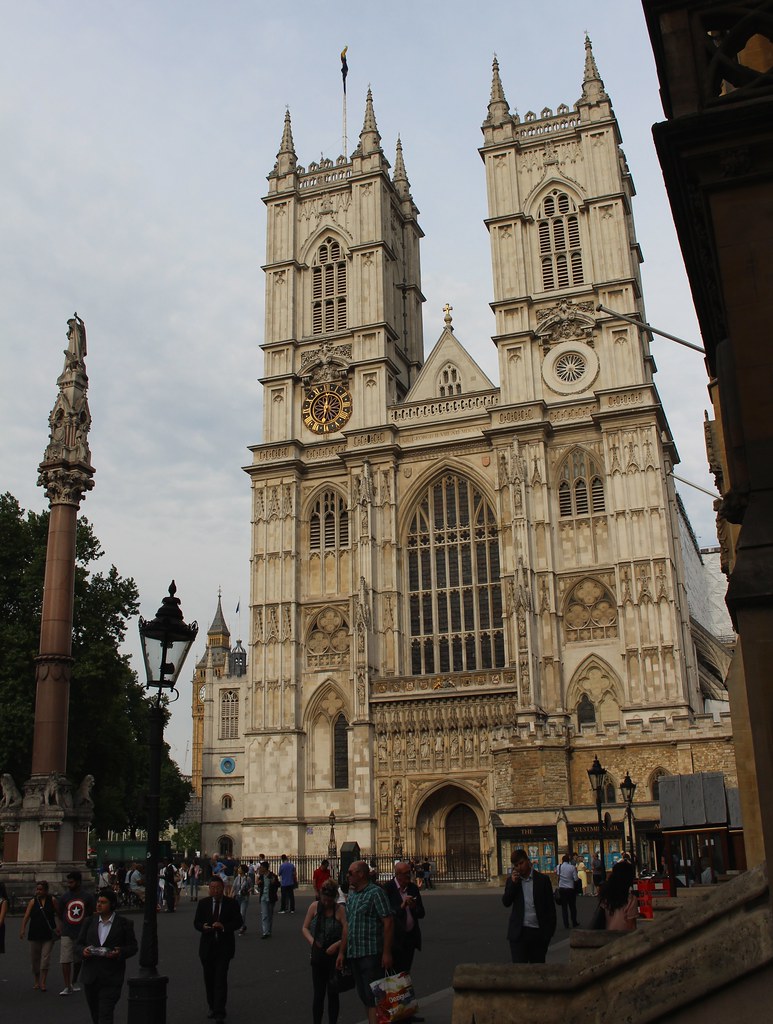 We went past Westminster Abbey, then walked through St James’s Park towards Buckingham Palace. 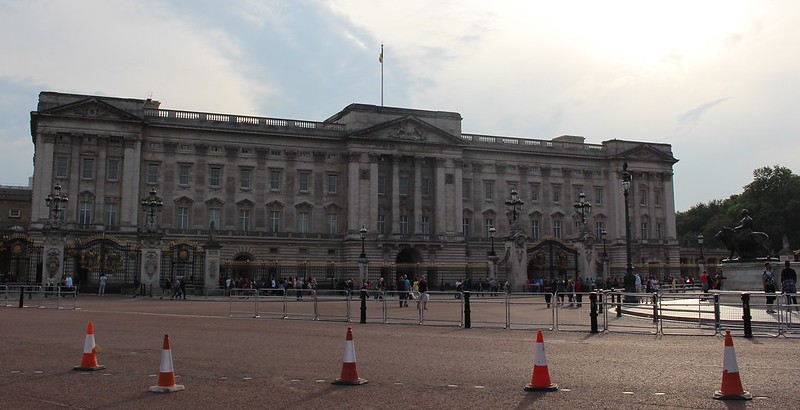 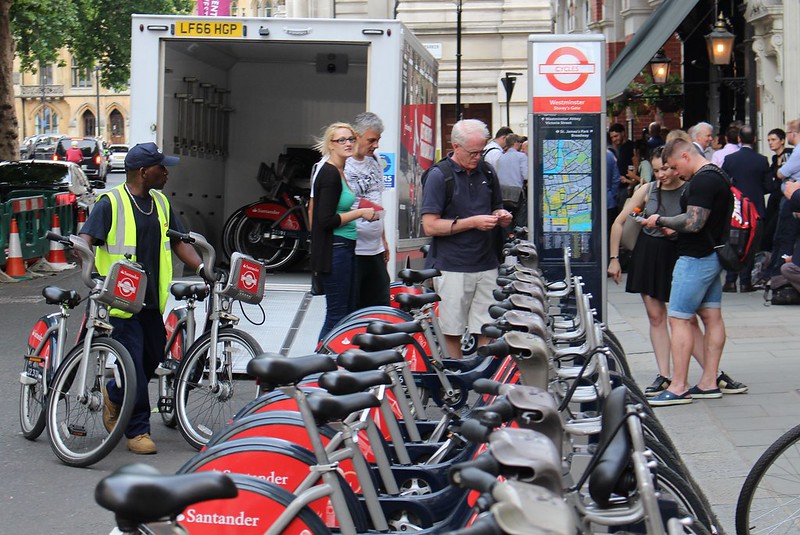 From there we walked to Victoria Station and hopped back on the Tube to Turnham Green (we were very quickly starting to learn about the various branches of the District Line). We decided to grab fish and chips along the way for dinner.

To pay for dinner, I needed to grab some cash from a nearby cashpoint. Something I saw at a few of them in the UK: they offered to convert my UK pounds withdrawal to Australian dollars, rather than let my home bank do it. I had no idea if this was a good deal or not, so I declined.

Anyway, we went back to the flat to eat our fast food and watch some telly before bed.

5 replies on “The border incident, and London sightseeing”

Big Ben – I heard an American tourist once ask a tour guide how to get to “Large Ben”. Of course the tour guide didn’t understand, which led to the American deducing they must be stupid, and that yelling it would make them understand. Much hilarity ensued – “Large Ben! Large Ben! How can you not know about Large Ben!?” I now think of it as Large Ben every time I see it :-)

Looks like the ATM offered you ‘dynamic currency conversion’- which is a rip off:

So I was right to opt out each time.

I understand it is always better to pay in local currency. Aside from DCC, your bank will have a better conversion rate than the the business where you are withdrawing or spending.

[…] there, we headed to Covent Garden, where we’d visited on our first (proper) day in London. J found another Doc Martens store (he was looking for a specific design) while I ducked back into […]