I was starting to get more comfortable in Belgium. It was getting easier as we realised how many people spoke English (most of them) and as I picked up a few words of French.

We had worked out a few more things to do while in Brussels – and on this Saturday morning, we headed out the door to the metro, towards the Natural Sciences Museum.

As with most other big city metros, using the Brussels metro is a breeze, because the trains are very frequent. The Mobib card worked flawlessly for us. As the metro staff member had advised, I simply swiped everybody in through the gates, then went through myself. Bingo, four fares deducted off one card. 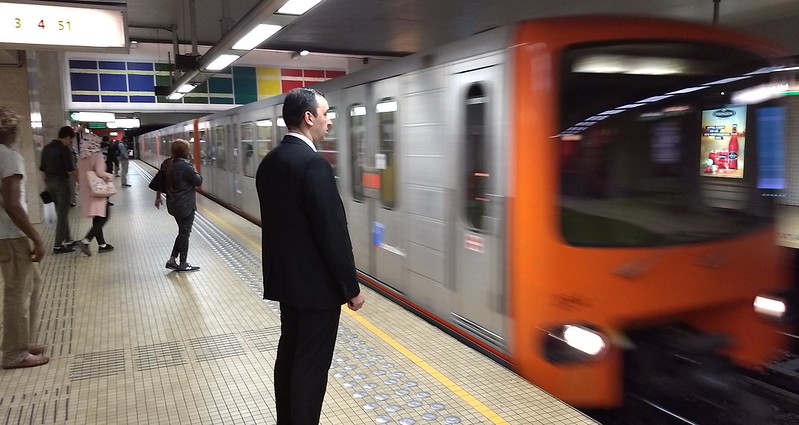 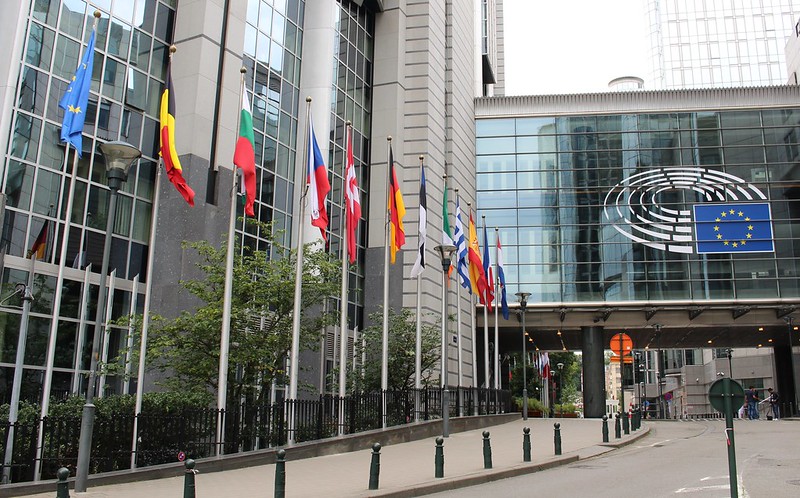 The metro took us to nearby the European Parliament, and we walked through the complex to get to the museum, noting along the way that amongst all the flags on display, the Union Jack seemed to be missing… who says they couldn’t act fast on Brexit? It was pretty quiet, being a weekend.

The museum itself sported a dinosaur out the front, and our prehistoric friends were prominent in the main grand hall of the museum, but there were lots of fascinating displays around the building, which was a little maze-like. A big display of animals was down one end, which was excellent — as long as you don’t mind that they’re all stuffed.

Australia was represented in part by a display of the thylacine aka Tasmanian Tiger, noting how they were hunted to extinction. Not our nation’s greatest achievement. 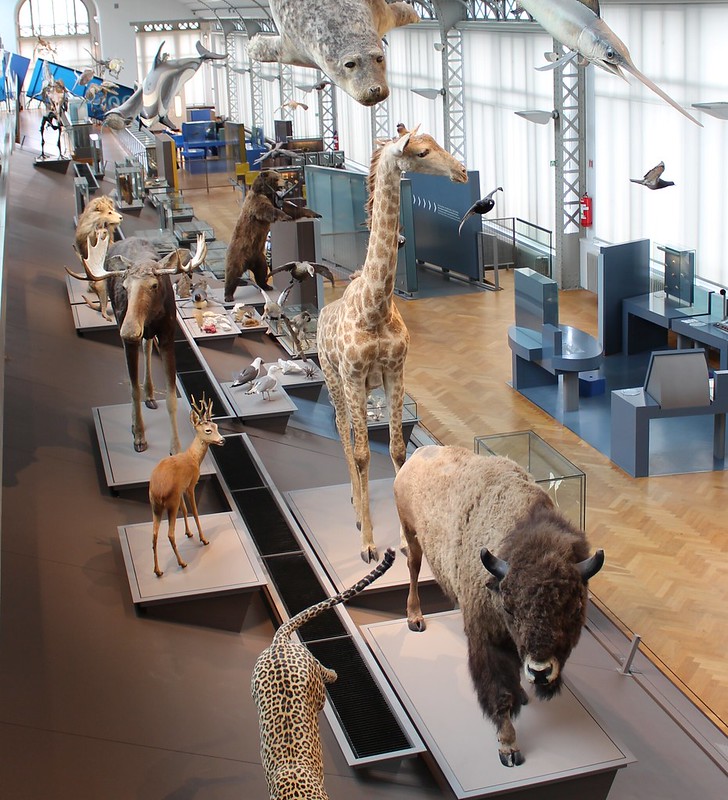 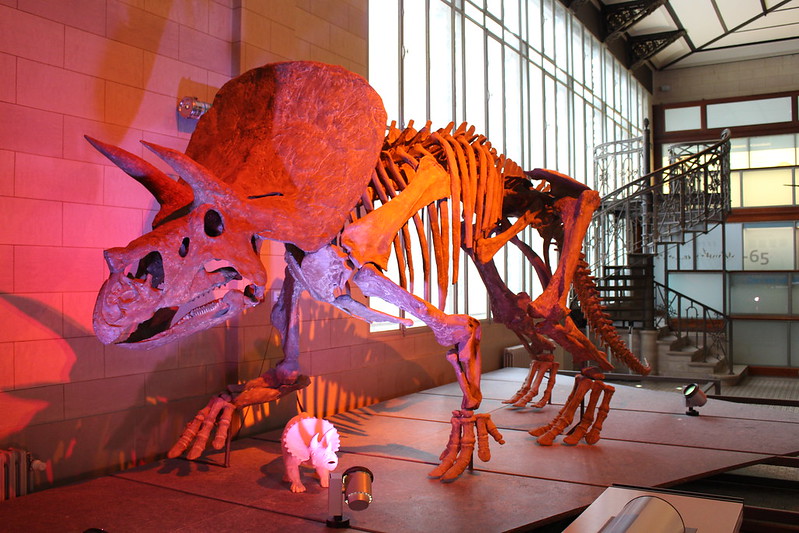 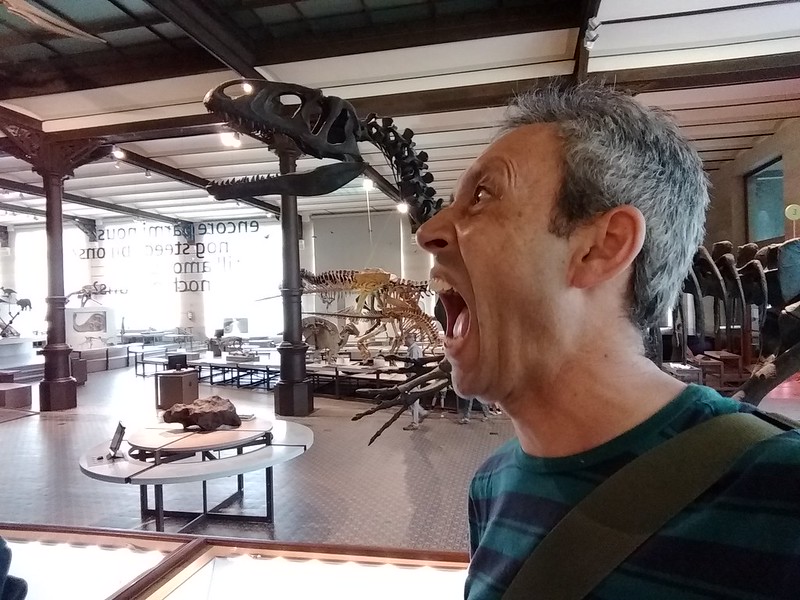 We had lunch in the museum, then headed back to the metro (this time to Maelbeek station, which by the way we learnt later was one of the sites of the 2016 terrorist attacks). 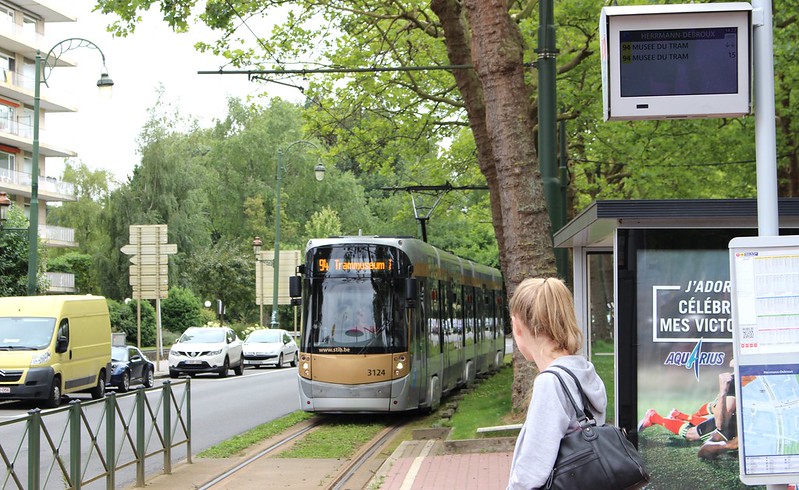 A change along the way onto tram 94 (runs about every 10 minutes, so minimal waiting) and we found ourselves at the Brussels tram museum, where we’d arranged to meet my cousin J, his wife V, and their brand new baby girl E.

They were a little way off, so we looked around the museum. Brussels has had trams for over a century, and a good variety of them (as well as buses and some other vehicles) are represented.

Adjacent to the museum, sharing some of the same roof, is an operational tram depot. So alongside the vintage trams, modern trams were arriving and departing. 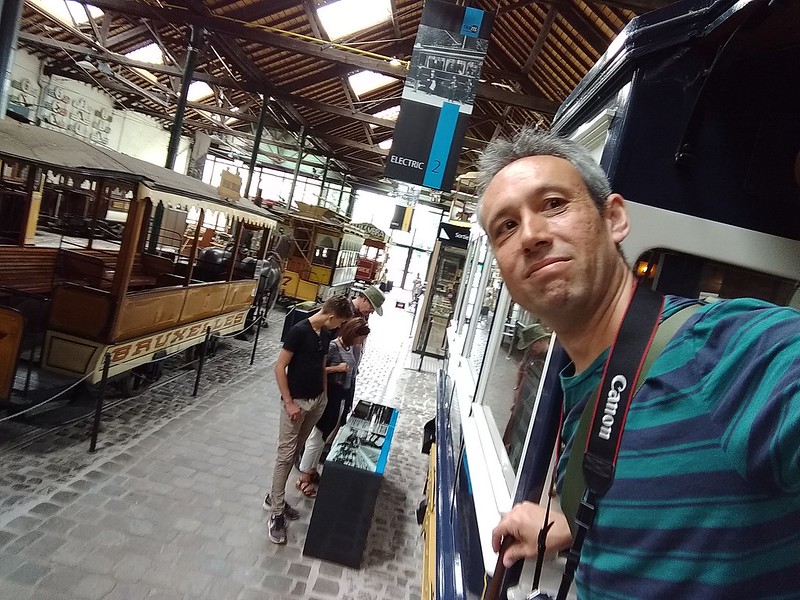 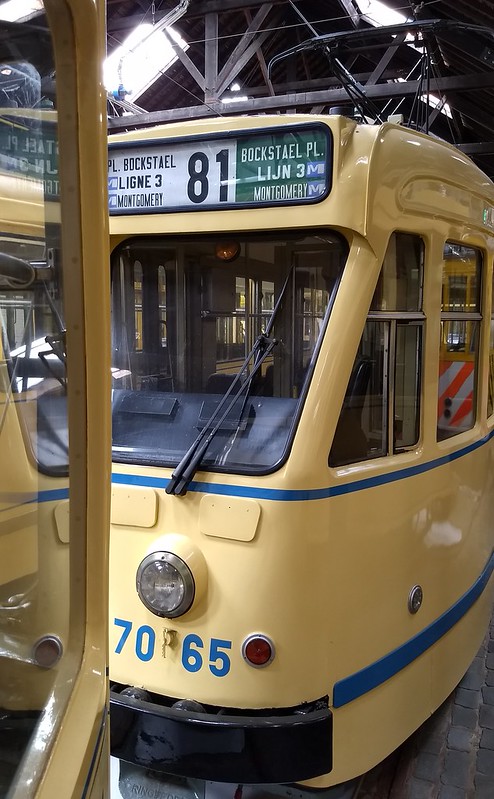 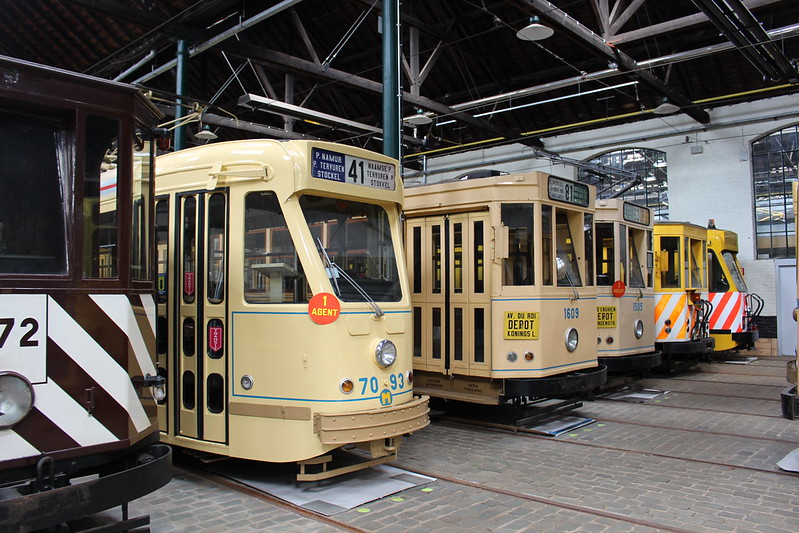 Then it was announced over the PA (in multiple languages) that there’d be a vintage tram ride. It might be a while until the next one, so we decided to hop on it.

Nope, it turned out to be a good 25 minutes up the road, though a kind of urban forest, to a balloon loop-in-a-park terminus (Tervuren station), then another 25 minutes back, our open carriage trailer being pulled by another tram.

The weather was good and the passengers were in a good mood, made even better by the comic signals between the conductors. No conventional bells here – they’d adopted bird whistles, so at each stop, when ready to depart, we’d hear a distant comedy duck quack from the other carriage, then our conductor would answer it (or vice versa).

So after the vintage tram ride, which took almost as long as that tangent of Brussels rail, we got back to the museum and spent some quality time catching up with my cousin, his wife and meeting the baby — according to this chart, she is my First cousin once removed.

Yes, I met my relatives and my brand new cousin in a tram museum. I highly recommend it. 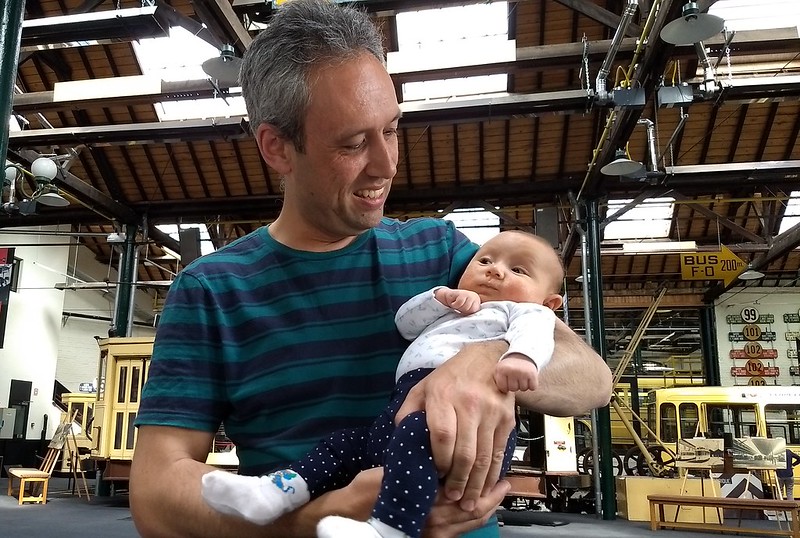 J+V suggested we head next to the Brussels Beach, an annual festival on the riverbank at Quai des Péniches, with food stalls, music, open-air cinema, beach volleyball – and lots of other activities where Brussels residents can pretend they live in a beachside city.

A couple of Metro rides later (again, frequent trains, so minimal waiting, though we had to hunt around a bit to find the pram-accessible routes through the stations) and we were there.

Along the way I spotted a petrol station, and pondered the prices. This seems to be Euro per litre. Perhaps not so different to here, though now I look at the photo again, I realise I don’t know how Eurosuper or V-Power related to plain old Unleaded in Australia. 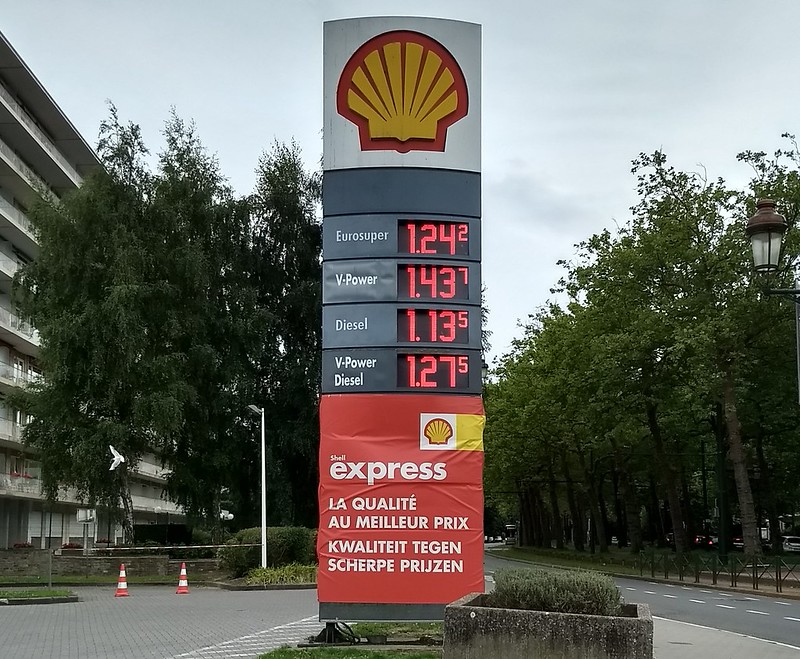 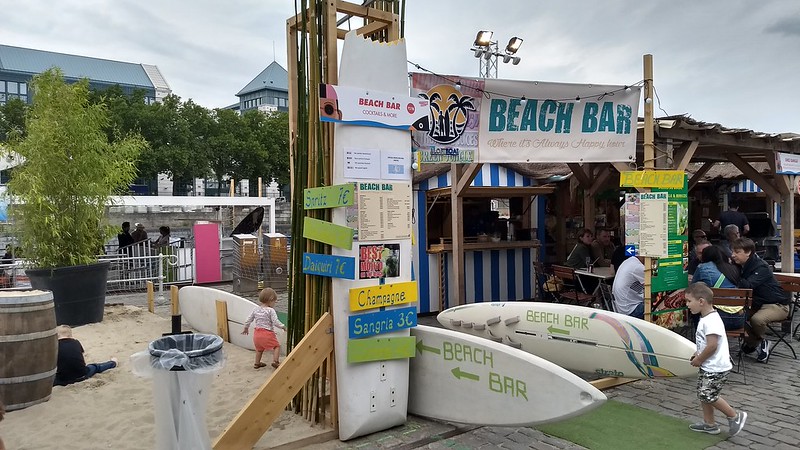 The “Brussels Beach” was busy with people. The long days and warm nights in Brussels in July certainly suit this type of event.

We sat and relaxed and ate at a Moroccan food stand. It was lovely, and despite (or perhaps because of?) the presence of large numbers of police and army personnel patrolling, the crowd was in a relaxed mood.

By the way, have you ever noticed how Streets in Australia is known as Walls in Britain? In Europe it’s Ola. But they all use the same logo. 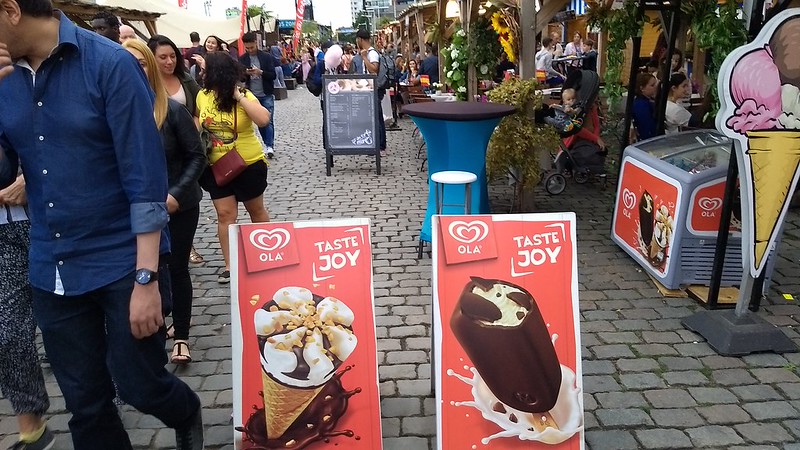 After a meal and a long chat, we said our goodbyes to my cousin and family – we aimed to meet up with them a couple of days later.

For us, it was back to the flat via the Metro. Tomorrow we’d be going farther afield.

Oh, so jealous. Why can’t we have transport at least as frequent?

“Eurosuper” is the equivalent of your plain unleaded.

What’s with the fractions of cents on the petrol station price board? You see the same in the USA too, but I was told that in the US it relates to the passing-on to motorists of federal and state petrol (gasoline) taxes.