What with sleeping in after a big day, and clearing the laundry backlog that had built up since Cardiff a week before, we didn’t leave the house until after midday.

So if we only did one thing today, make it something good. Given we were in Belgium, and I’m a lifelong Tintin fan, the choice was obvious: The Herge Museum.

We headed for Midi station and wrestled with a ticket machine to try and buy a ticket to Louvain-la-Neuve. It didn’t work. I tried it several times, and I couldn’t figure out what I was doing wrong.

In frustration I searched for a booking office to see if I could buy tickets from a human. I found one, which turned out to be the wrong booking office – it was only for international and long distance tickets – they wisely had someone on the door directing people.

Then I found another staff member who I coaxed to watch me try another machine (to see if I could learn what I was doing wrong). And of course, it worked perfectly. The lady said that possibly it was an issue with an overseas credit card, but also that sometimes they are temperamental – the easiest thing to do is simply try another machine. 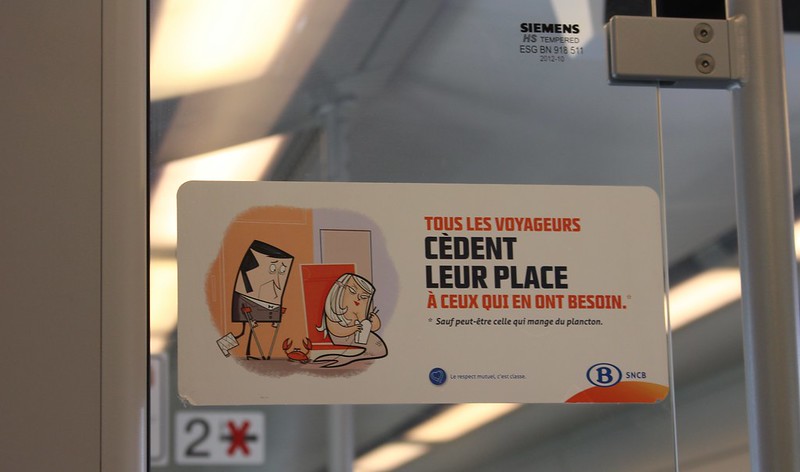 We went up to the platform to catch our train: S8 – Brussels is adopting line numbering similar to German cities with their S-Bahn lines – the S originally stood for Stadtschnellbahn (city rapid railway).

In Brussels, S is used for suburban trains, which are separate from the Metro, but are a portion of the overall state-run national railway network. The line renumbering came in a few years ago, and is part of a broader plan to upgrade suburban services – this was evident during the trip from the amount of work going on.

They are clearly working on track expansion, apparently to better separate long distance and suburban trains. Along most of the line there was space for additional tracks, and extra platforms were under construction. The newer stations had high platforms, but some of the older ones had the type of low platform you often see in Europe, and it looked like these were being upgraded too. 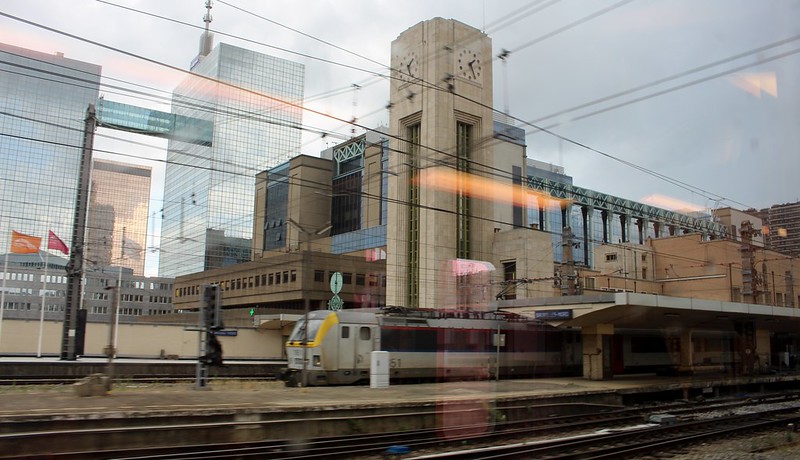 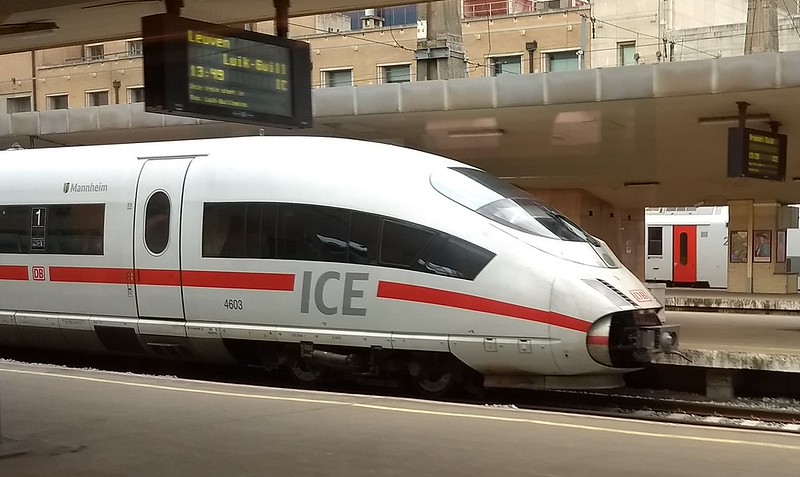 We saw plenty of trains from elsewhere in Belgium and Europe. A German ICE (Inter-City Express) train was waiting at one station. “DB” stands for Deutsche Bahn, of course, though when I was a kid I had Lego trains and chose the DB stickers included in the pack, since they matched my initials.

Belgian trains drive on the left, while road traffic is on the right. Apparently Belgium was only the second country in the world after the UK to get railways, and used a lot of imported expertise, so settled on using the left (so did the French).

Train S8 is only once an hour, though our destination was served by other trains, so between the hourly trains there were options that included changing along the way. The S8 was conveniently timed, and the trip to Louvain-la-Neuve took about an hour. It seems to be a university town — they seemed to be gearing up for an event that night in one of the public squares, perhaps for whatever the Belgian equivalent of O-week is. 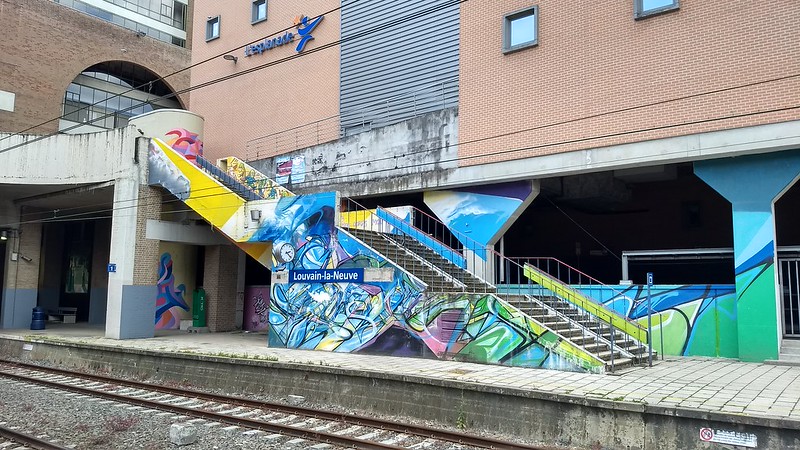 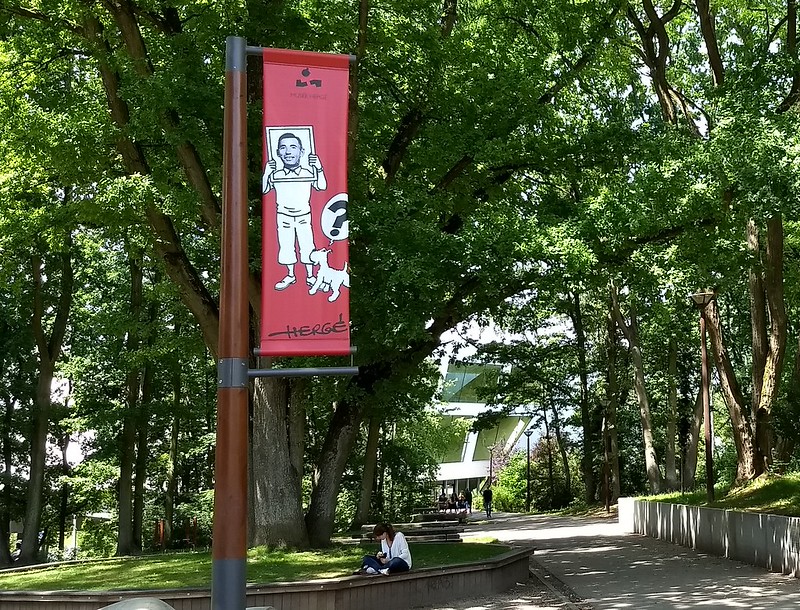 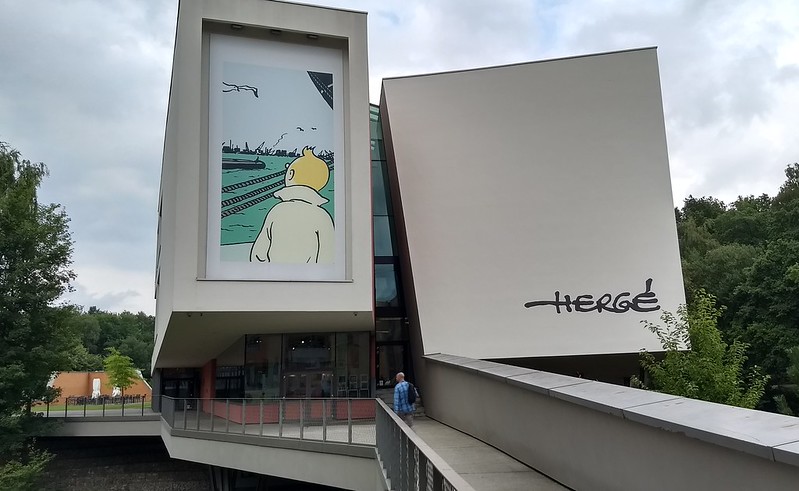 The Herge museum is only a few minutes walk from the station, and we reached it just in time for lunch.

The museum restaurant is a cut above your average museum eatery, and we got a very nice 2-course lunch for €16.5 each. 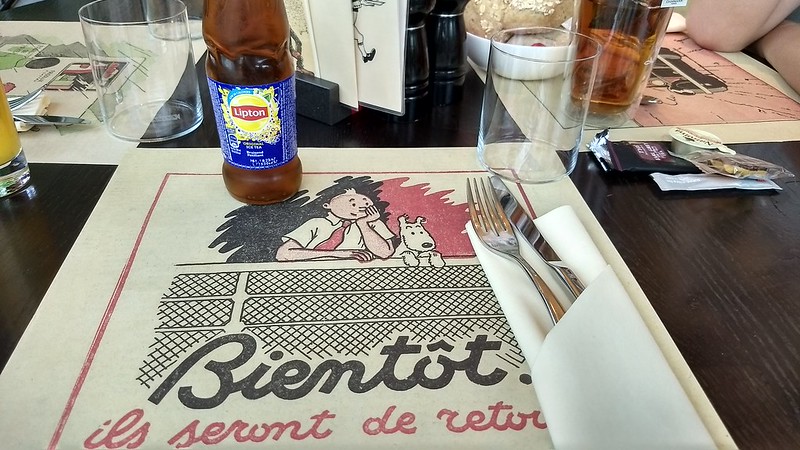 And then the museum itself. We grabbed audio guides — I was keen to take it all in, every last drop — and got to exploring the three levels.

I loved it. It was superb. If you like Tintin and ever find yourself anywhere nearby, I highly recommend it. 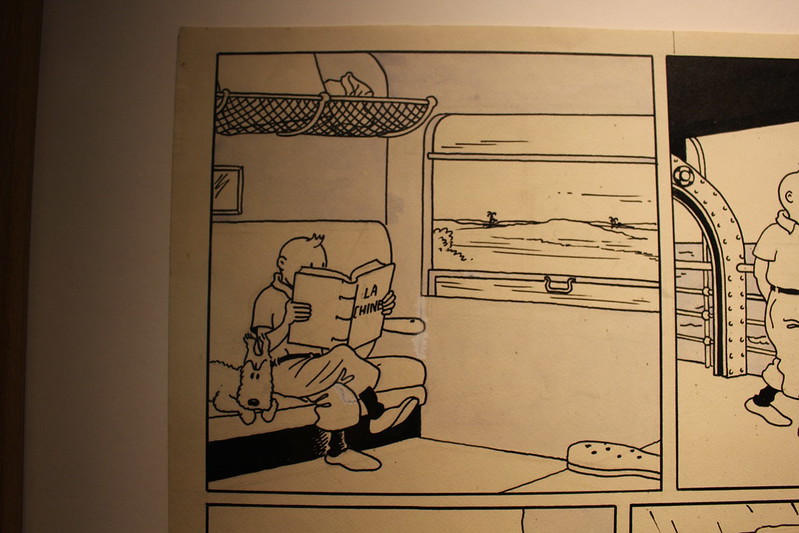 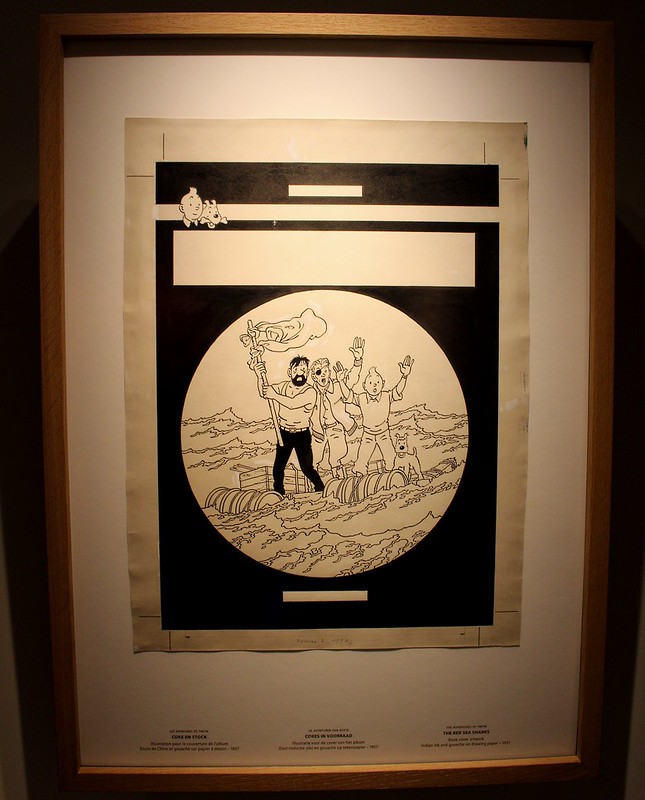 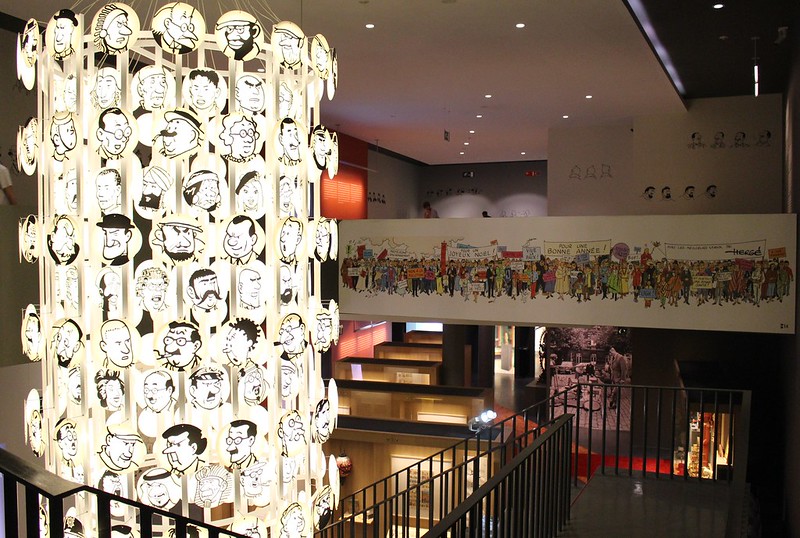 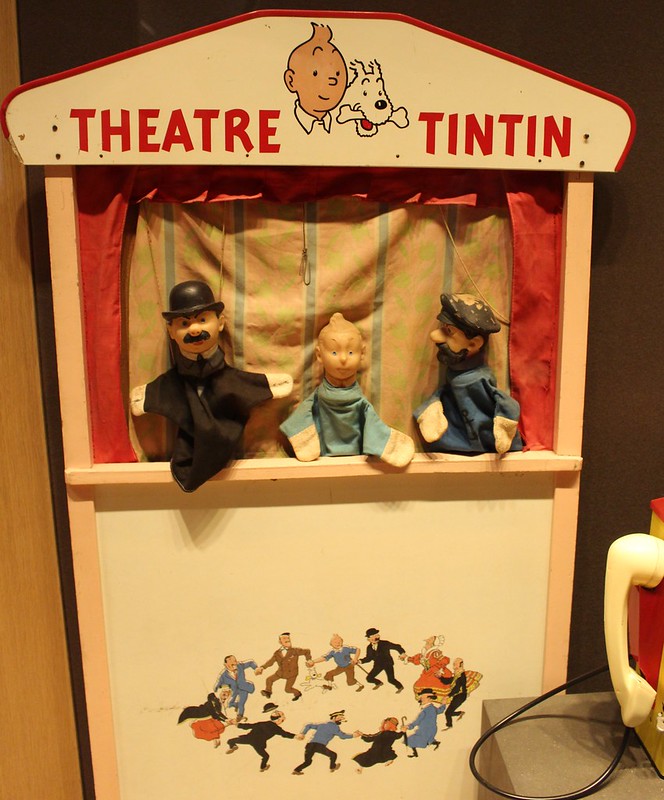 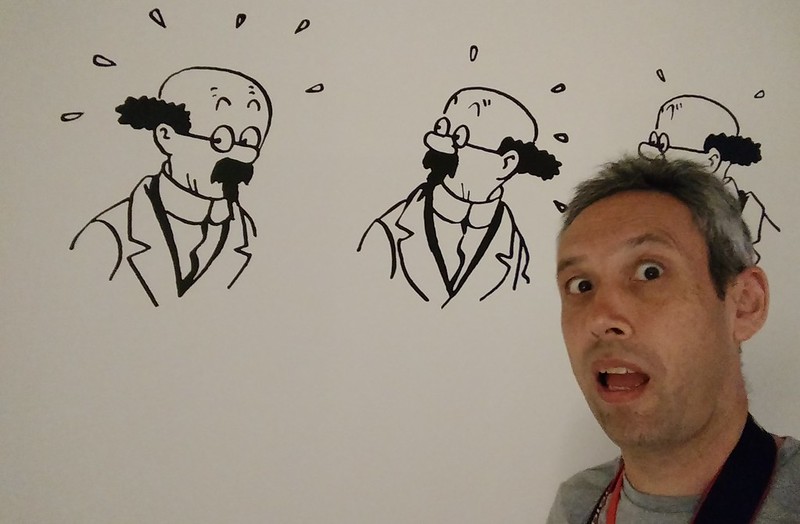 The Museum shop, of course, was full of goodies, many of which you wouldn’t find at home in Australia. We ended up buying a book of interviews with Herge, t-shirt for me, a small brain teaser game for my niece and nephews, and mugs — Castafiore and the Thom(p)son Twins, to go with some we already had.

It was about 5:30pm when we walked back to the train. According to Google Transit/Maps, we should have been in time for a 17:40 departure back to Brussels, but it wasn’t showing on the station displays. Instead they listed the 18:01 to Ottignies (the major interchange one stop up the line) instead, so we boarded that.

I looked at the Belgian Railways web site to see if anything was going on. It said a person had been struck by train at Groenendaal a couple of hours earlier. No train services, bustitution instead. 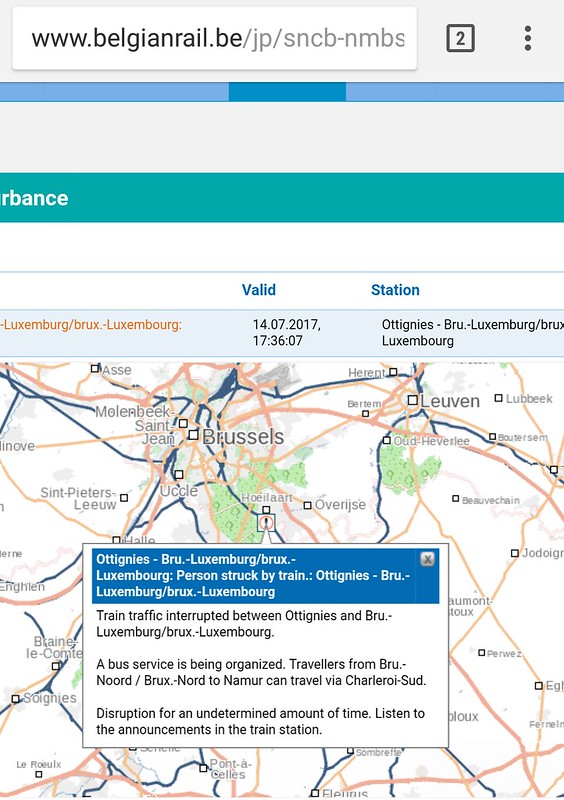 Well, that’s a horrible thing to happen. And yes, for the second time this holiday we were set to be bustituted.

At Ottignies, a mass of people off the train. The indicator boards showed the 18:14 Intercity train to Brussels arriving on another platform. I thought maybe the disruption was passed, or that train might bypass it, so we hopped on that and found seats. 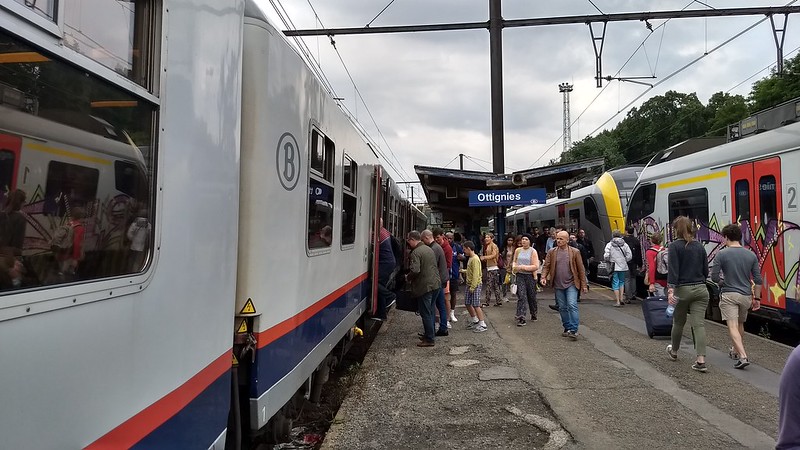 That train got as far as La Hulpe, then we stopped.

After a while there was an announcement in French (and possibly Flemish). I asked a passenger nearby what the conductor had said. Suffice to say it was that we’d be going nowhere for some time.

Thankfully we were stopped at a platform, so they unlocked the doors and let passengers out to get some fresh air (which of course means allowing smokers to light up — unlike at home, smoking isn’t banned on station platforms). 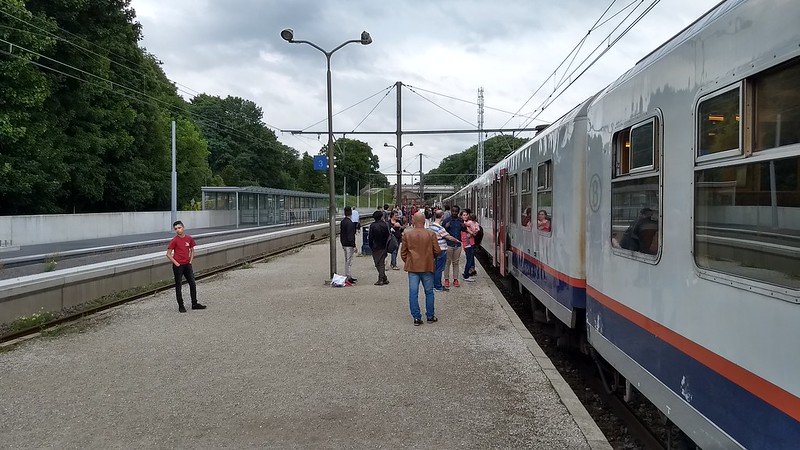 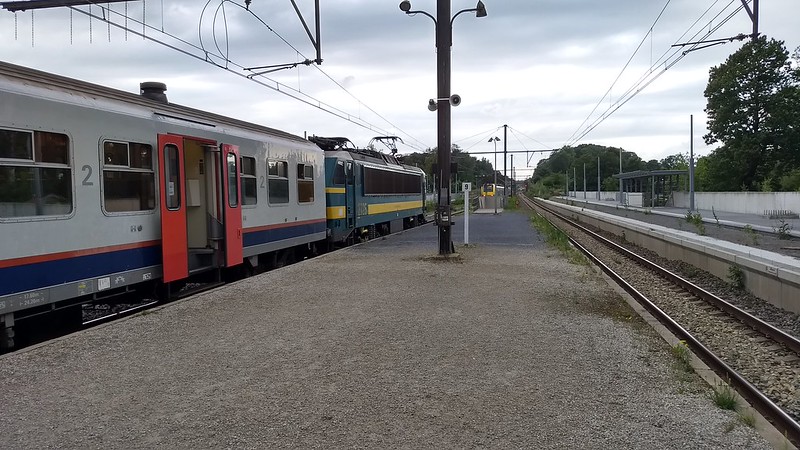 The view from the platform made it very clear why we were going nowhere. Only perhaps 50 metres up the line there was another stopped train. And another in front of that one.

The station itself appeared to be in the middle of nowhere. Probably fat chance of finding a bus or an Uber, though I don’t honestly recall if I checked my phone to see if either was possible.

Isaac read my new Herge book from cover to cover (it’s not very big) and the rest of us browsed Facebook, wandered the platform, and/or took photos of trains. The conductor and the train drivers mingled with the passengers on the platform. If anybody was angry or frustrated, they didn’t show it. Perhaps they all understood what had happened.

About 90 minutes after getting stuck, we eventually got going.

As we got into central Brussels, there was a long announcement from the conductor that we couldn’t understand. My friendly interpreter had gone. 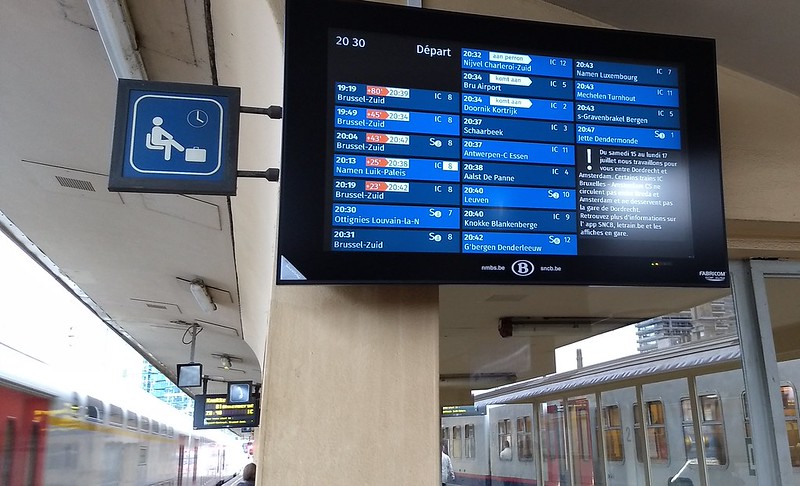 At Nord (Brussels North) I looked out at the screens along the platform. It was as I suspected: the train was being short-shunted at Nord. We alighted and waited for another train to Midi/Zuid. The screens were showing major delays to services — Belgian Railways aren’t afraid to show these in red so they stand out; one train was 80 minutes late.

What had actually caused the delays? Local media had the story: it seems a lady had committed suicide. Awful. And a reminder that these things can happen anywhere.

I probably should have looked at options to get back via Metro or bus, but instead we got another train back to Midi.

For dinner we ended up back at the plaza in a pizza place. I almost misunderstood the menu and ordered four times too many pizza slices, but the guy taking the order put me right. 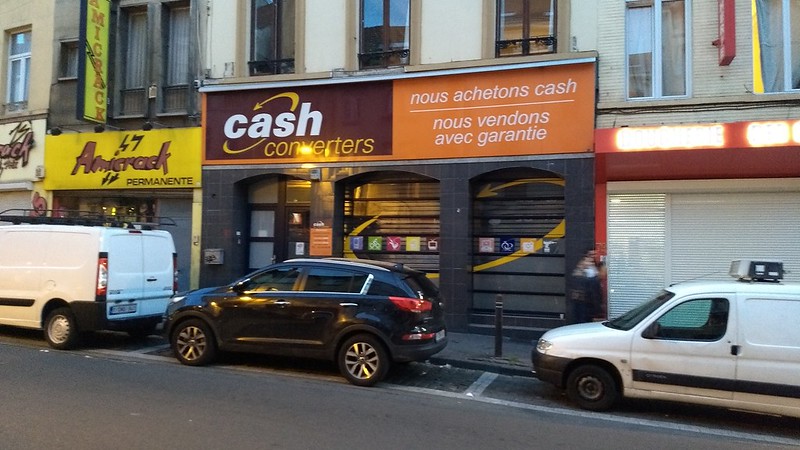 On the way back to the flat we passed a Cash Converters, which surprised me – it seems they started in Australia but have franchises in a few other countries.

I felt by this point we were getting more acclimatised to Belgium. Tomorrow we’d do some more exploring around Brussels.

Groenendaal is where the dogs come from.

The pommy morons in Sydney have replaced them with ridiculous orange and white signs. I don’t think that I have any form of colour blindness, I find them almost illegible.

[…] holiday blog is currently up to Brussels. In this post I’ve compared the many types of rail transport in Belgium, and I try and ponder […]