We bade our farewells to the family and my uncle K gave us a lift to Taunton station.

First step to our next destination was a train to Exeter, or to be precise, Exeter St Davids. As with Bath a few days earlier, Exeter is served by multiple railway stations, originally built by different railway companies.

Exeter Central is, as the name would suggest, more central, but it’s Exeter St Davids that opened first, and is now the busier main station. (Some people complain that Melbourne Central Station isn’t the main/central station. It seems that situation isn’t unique.)

We had to change trains at Exeter, but first we peered outside (pouring with rain, pretty much the first rain we’d encountered on the trip) and bought some sandwiches to eat on the way.

Our next train was heading for our destination: Penzance. It was the grandly named Cornish Riviera Express. Apparently this name has been used since 1904. It was mentioned on the station displays, though I didn’t notice any specific branding on the train itself, which was a standard High Speed Train (Intercity 125) set. 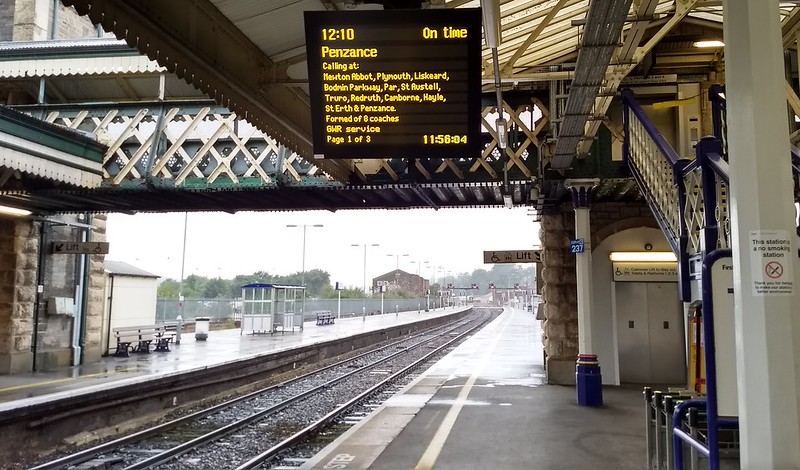 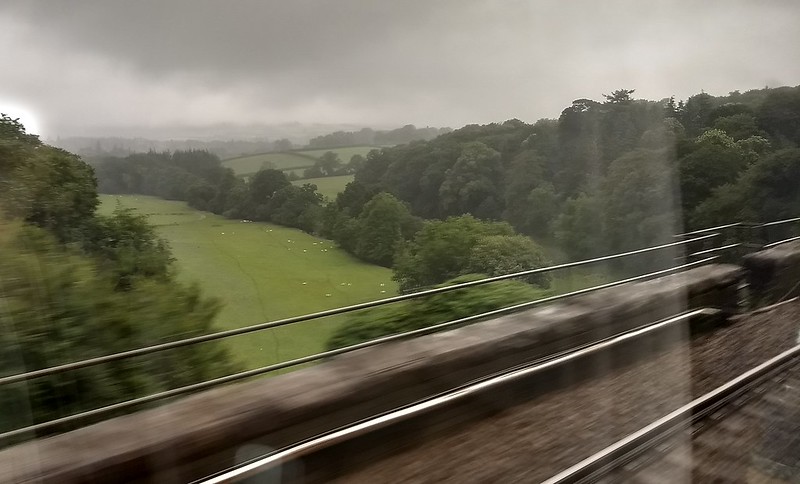 We zoomed along through Devon, with some great scenery despite the grey skies.

Due to the hilly countryside, there are a large number of railway viaducts providing views over towns such as Plymouth. This is the view from the Keyham Viaduct – apparently it’s 27 metres up in the air. (Here’s what it looks like from below.) 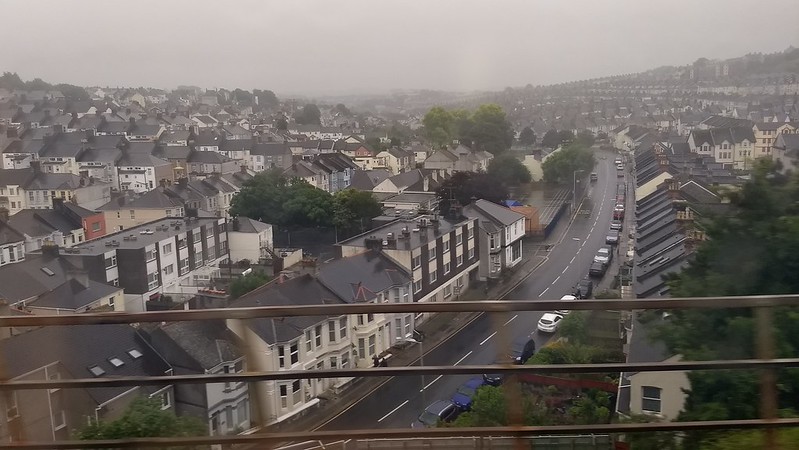 Yet another grand bridge built by Brunel carried us across the River Tamar and into Cornwall. In fact we passed over numerous bridges, with some very impressive views along the way. Of course you can’t really see the bridges when you’re in the train, though in this case we got a good view of the parallel road bridge.

And then… we stopped at St Erth, one station short of Penzance, about 10 kilometres away.

For a while we didn’t move. My spidey sense detected something wrong. Then the announcement.

A truck (sorry, a lorry) had struck a bridge up ahead. The conductor, sorry train manager (fair enough, these HST trains are pretty long, and they actually have quite a few staff) got on the PA and apologised profusely, but we’d need to hop off the train here and wait for replacement buses.

We all got off the train in the drizzle and sheltered in the undercover part of the platform. The train manager and her colleagues were on their two-way radios trying to find out about replacement buses and/or whether the train would continue on once engineers had checked the safety of the bridge.

After a few minutes they said that due to the delay, the train would be short-shunting and heading back to London.

One of the rail staff suggested, given there was no ETA on trains resuming, that people exit the station and try their luck with the local buses. I checked Google Maps for buses – they ran about every 20 minutes from here to Penzance. I also checked the Uber app. Nothing nearby. So in light drizzle, we joined a queue of the braver passengers at the bus stop on the main road. 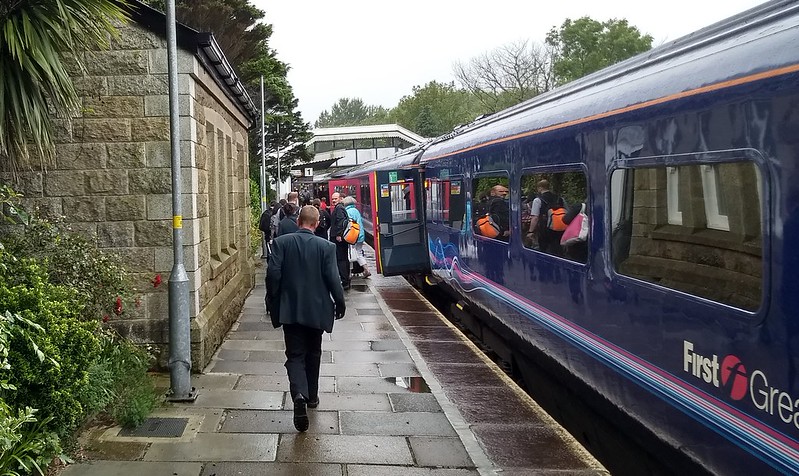 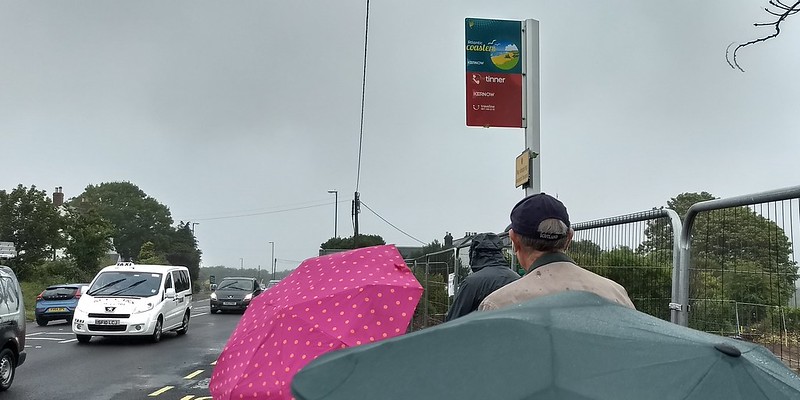 A bus arrived and a rail staffer hopped on first to check with the driver about them accepting rail tickets. The bus driver, who in fact is from the same parent company, seemed more concerned with just keeping to his schedule, and let everybody aboard gratis, so we squeezed on with our luggage and had a slightly more lurchy, cramped arrival in Penzance than expected.

We’d come halfway around the world and we’d been short-shunted and bustituted.

The train had been due in Penzance at 3:11pm. The line was shut until about an hour after that, but the bus got us there about the same time the line re-opened, so we probably ended up saving some time. As it was, the Train Manager had said we should be able to claim a refund on our tickets, so a few days later, I did just that. I haven’t actually had a response yet. (I don’t know how it works when the incident is outside the train company’s control.)

Update: On 14th September, GWR emailed me to say they’d be refunding us £60, by cheque. Will be interested to see if a cheque shows up in the mail. 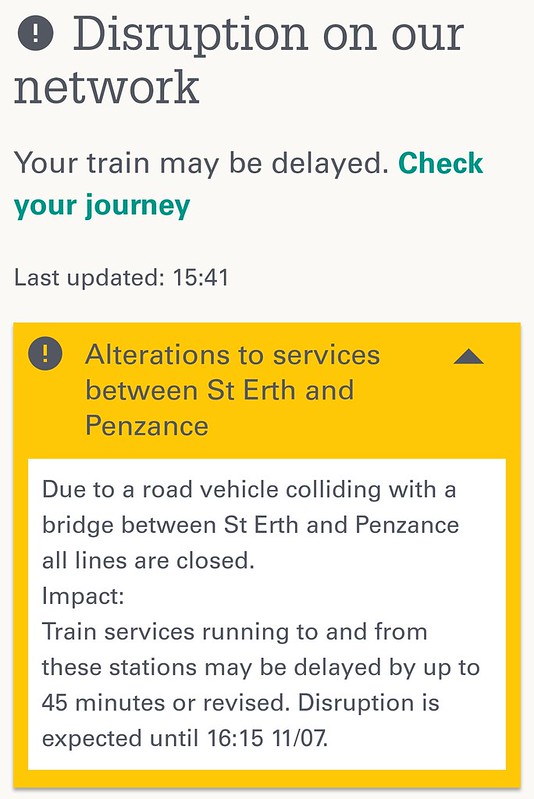 From the bus station, we walked to hotel, just off the main drag, which curiously is called Market Jew Street. Apparently the name is a derivation of the Cornish Marghas Yow meaning Thursday Market.

The bloke on the hotel front desk asked “Where from Oz are you?” Melbourne – “Ah! I had a working holiday there, lived in Hawthorn for a while.” Small world.

(Few people in Australia say “Oz”, by the way. It appears to be particularly British slang for Australia.)

Across from the hotel was a shop full of various secondhand goods, and a Dalek in the window. Nice. (Weeks later, regular Doctor Who writer and actor Mark Gatiss would spot it too, and if you Google for Penzance Dalek, it looks like everyone who’s been through town has seen it.)

Another in the occasional series 'Daleks in shop windows'. pic.twitter.com/Ji9FF8MZQm

Nearby was a house marked with a non-blue plaque noting that the aunt and mother of the Brontë sisters had once lived there. History.

We headed down towards the sea to explore. 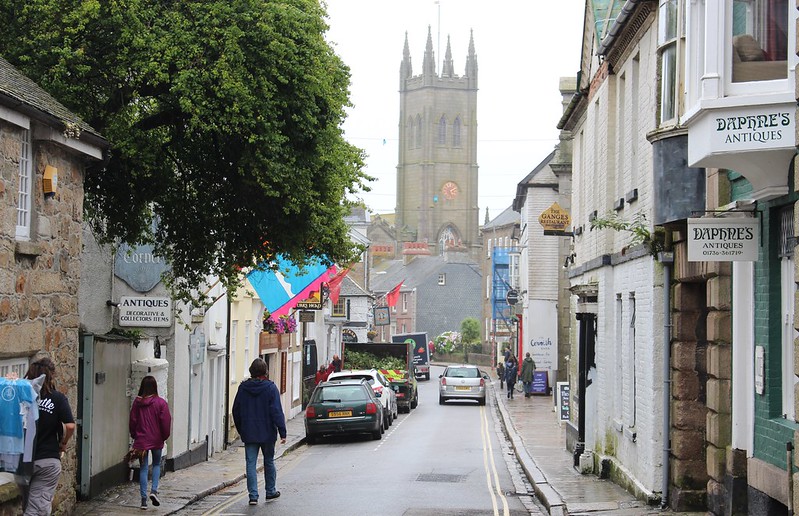 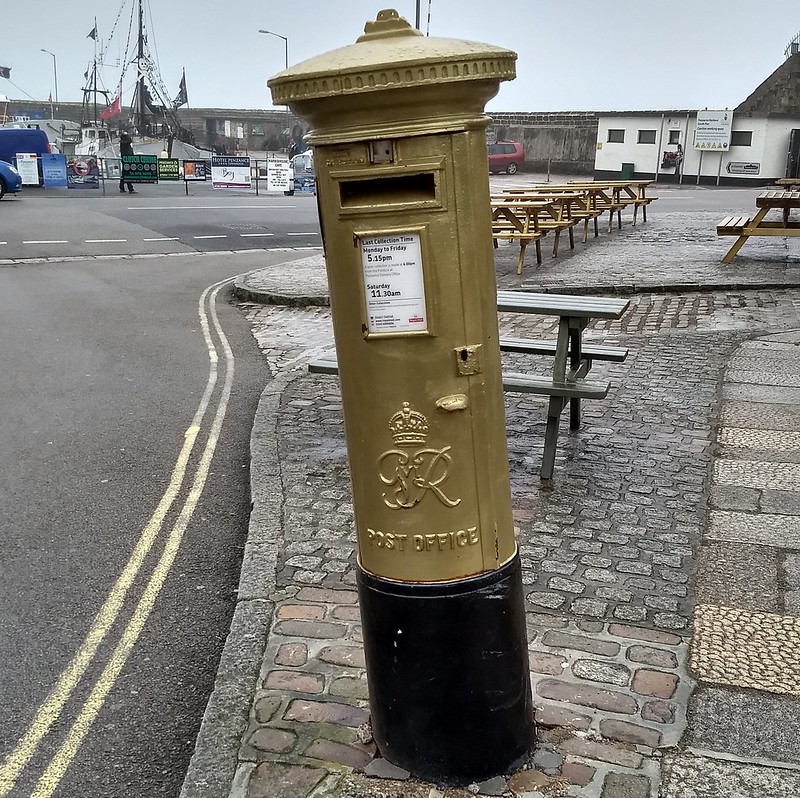 It wasn’t cold and it wasn’t raining, but the weather was more than a bit breezy. Powerful waves were hitting the coastline.

I was keen to look closely, but keener still to keep my feet dry, as in an attempt to pack light, I’d only brought one pair of shoes on the trip. As you may be able to hear from my exclamation, this was not entirely successful. 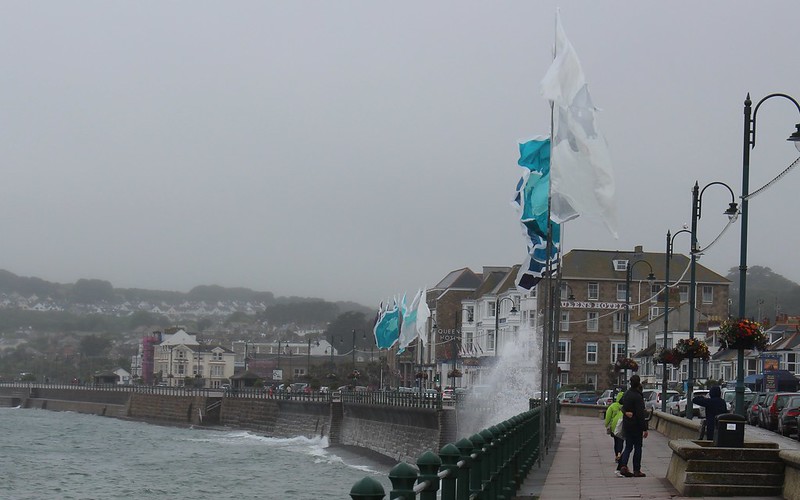 No pirates were obvious, but they wouldn’t be, would they?

Trivia from Wikipedia on The Pirates Of Penzance: The work’s title is a multi-layered joke. On the one hand, Penzance was a docile seaside resort in 1879, and not the place where one would expect to encounter pirates. On the other hand, the title was also a jab at the theatrical “pirates” who had staged unlicensed productions of H.M.S. Pinafore in America.

Apparently the lack of international copyright had caused problems for Pinafore.

Nowadays the locals seem enamoured of Poldark, which is filmed and set around Cornwall.

Other sights included a drydock, ship in situ, and various other shippy infrastructure which indicated it’s very much a working harbour. 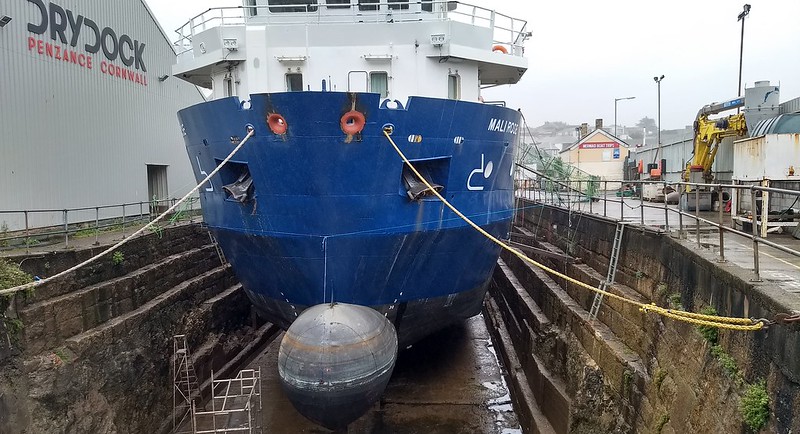 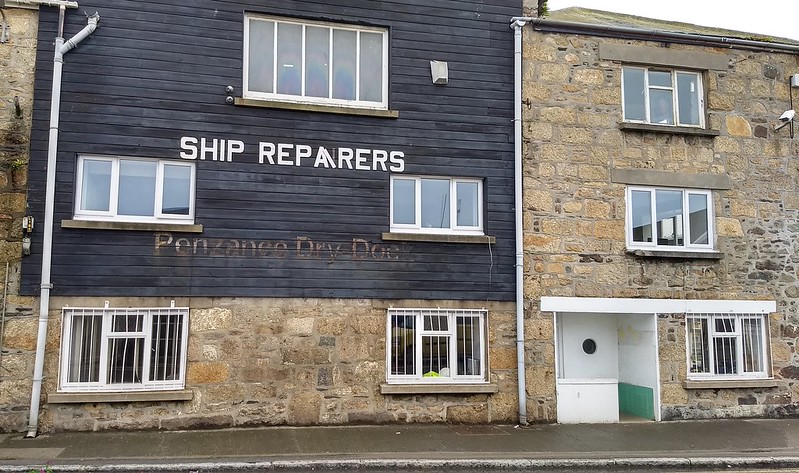 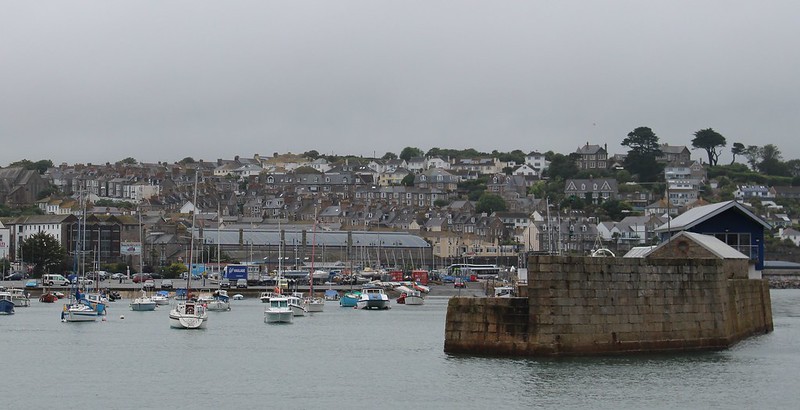 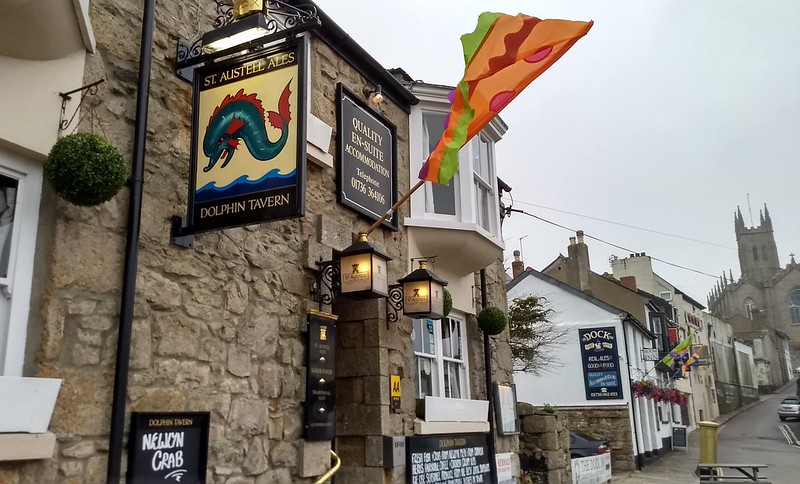 After a long walk around, we ended up back in the middle of town, and decided to eat dinner at a pub we’d spotted – The Dolphin, by the water. Most delicious.

Then some more walking around before we headed back to the hotel.

5 replies on “Heading to the wild, wild west (Cornwall)”

Yes, I get the bus driver more concerned with his schedule. Can’t say much more than just a lovely post, in spite of the weather, then there and here now.

[…] most cases I didn’t look into this option, but I did check for one trip from Taunton to Penzance, which involved changing trains along the way at either Par or Exeter St David’s. It turned […]

[…] It drained the finances a bit. Occasionally in the past I’ve tried to catalogue all the costs in detail. I won’t this time, but for the four of us, all the accommodation, travel, meals and attractions added up to about $9000 plus airfares of about $2500 per person. Though I did get a refund on the train fare from Exeter to Penzance! […]

You did well getting the refund – if you actually got it. It may help to know for future, that Citibank’s transaction plus account (in Australia) has no fees for depositing foreign cheques, but it has to be done by post. It takes about 3 weeks to clear.

Your refund is better than mine: on Friday 16 February there were extensive train delays from Box Hill to Camberwell (Box Hill to Mont Albert took 46 minutes), due to a power system issue at Camberwell. I bailed at Mont Albert and caught trams to work at Southbank. I tried for $80 (the same $80 offered by electricity distributors after their power outage), but only got offered a daily fare :-\