Hideous concrete “bollards” are being distributed around central Melbourne, in an effort to prevent terrorist attacks with motor vehicles such as those seen in Europe.

#Melbourne has hundreds of concrete bollards placed around the city. My toon @theheraldsun #terrorism pic.twitter.com/dtmx35DV8Y

More concrete barriers around city today. Temporary only, but necessary as advised by @VictoriaPolice. Permanent solution w be more elegant!

This is fortunate, because the design means that although they can be used for sitting on, they also partly block pedestrians where they are located.

In some spots they roughly halve the capacity, making it quite difficult for an able-bodied person like me to walk between them when it’s busy. It must be doubly difficult with a pram or mobility device. 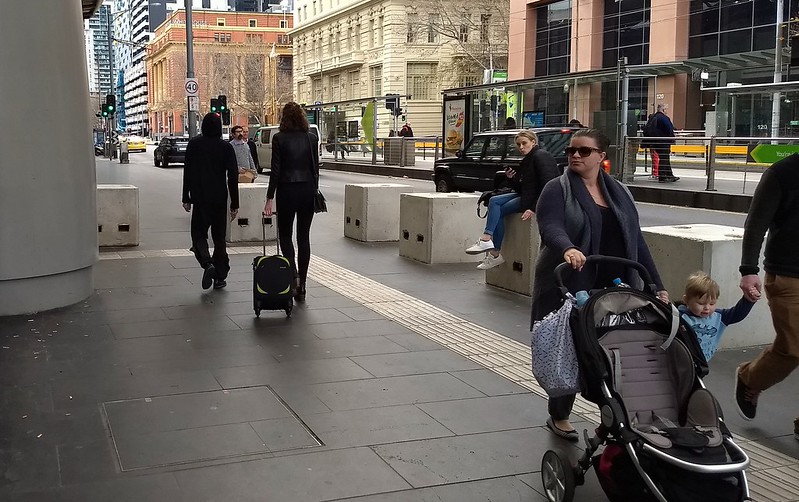 Obviously they’ve been installed in a hurry. In order to physically stop vehicles, but not involve complicated footpath works to embed a smaller bollard in the ground, they’ve just plonked huge concrete blocks around the place.

They could paint them of course, but I wonder if there’d be all this fuss if they weren’t so fugly?

It’s not as if Melbourne has a shortage of bollards already.

I’m not one to judge what type of vehicle they are capable of stopping, but here’s a sample from a walk around the CBD: 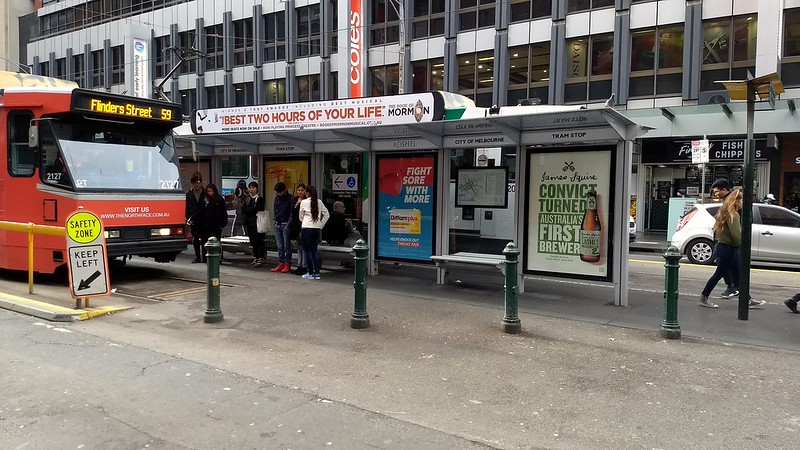 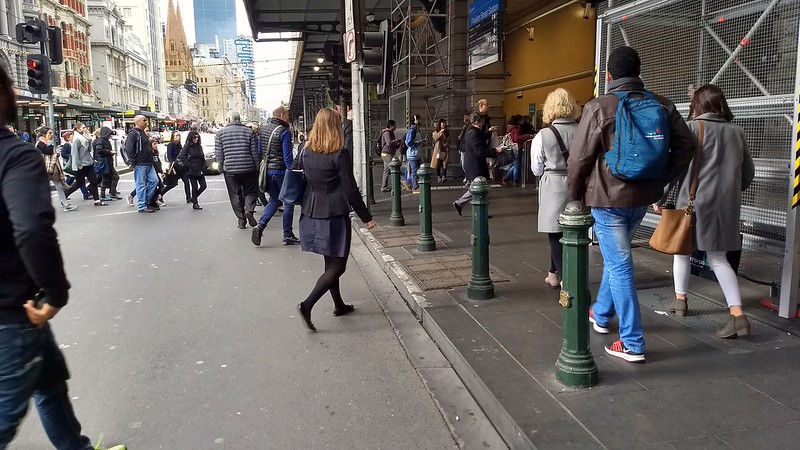 These bollards protect the tram stop in Bourke Street, and similar ones are in place next to numerous similar tram stops 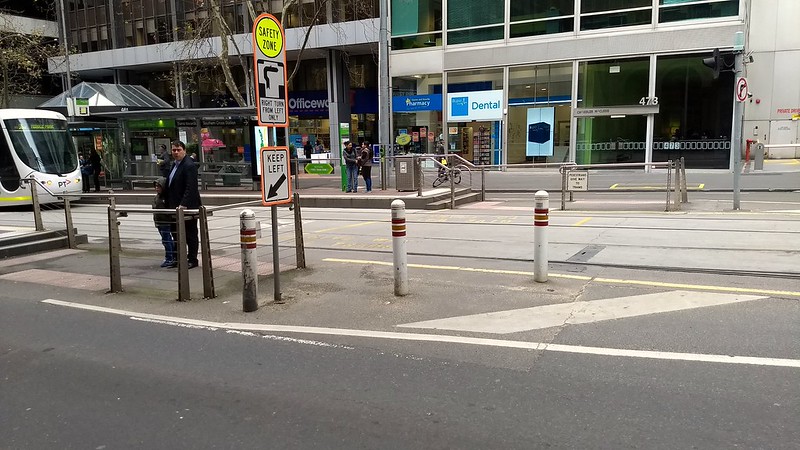 Bourke Street, near William Street. These seem to be removable, and look and feel pretty rickety. 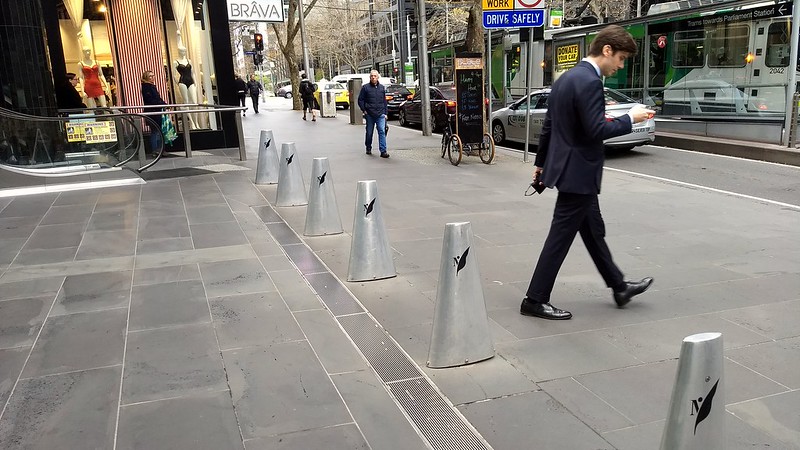 New Chancery Lane, next to RACV 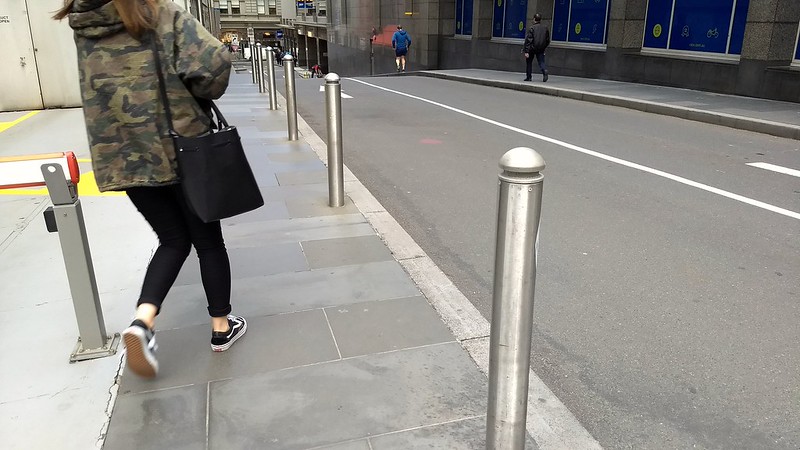 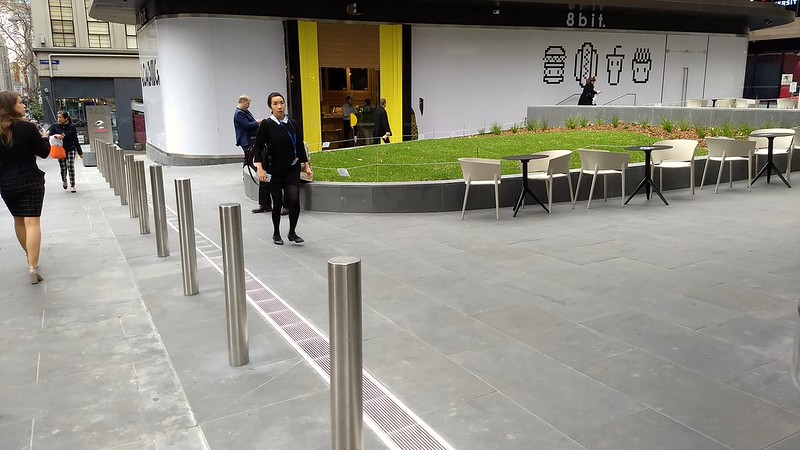 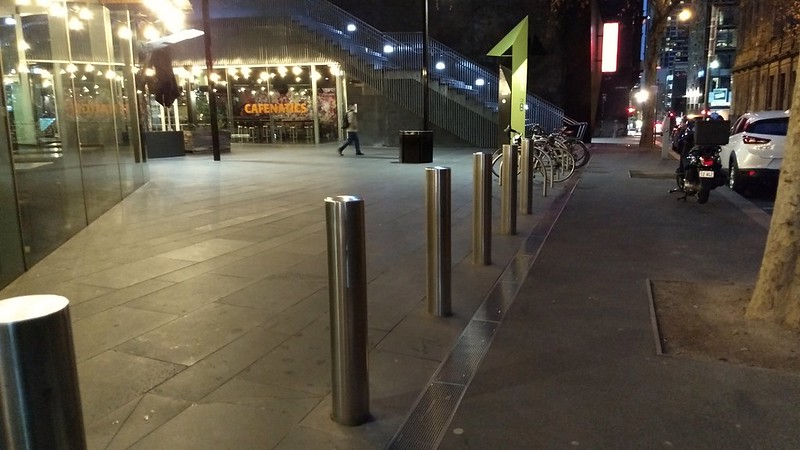 These have been around Flagstaff Station for many years, but are actually intended to protect the surrounding Federal and Family Court buildings. (The Family Court was attacked with a vehicle when it was located in Bourke Street) 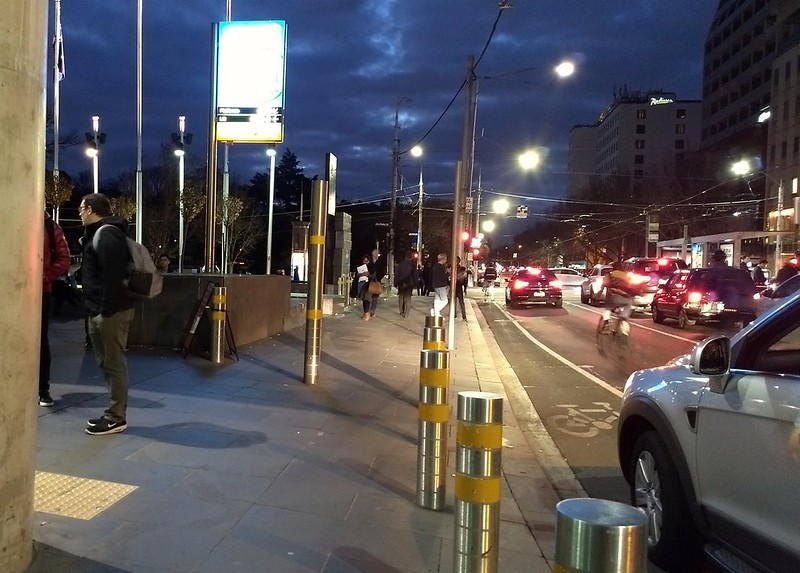 Little Collins and Queen Streets. I have no idea why this one had a glass on top of it, but presumably the bollard placement is intended to prevent turning vehicles overhanging the footpath where pedestrians may be waiting. 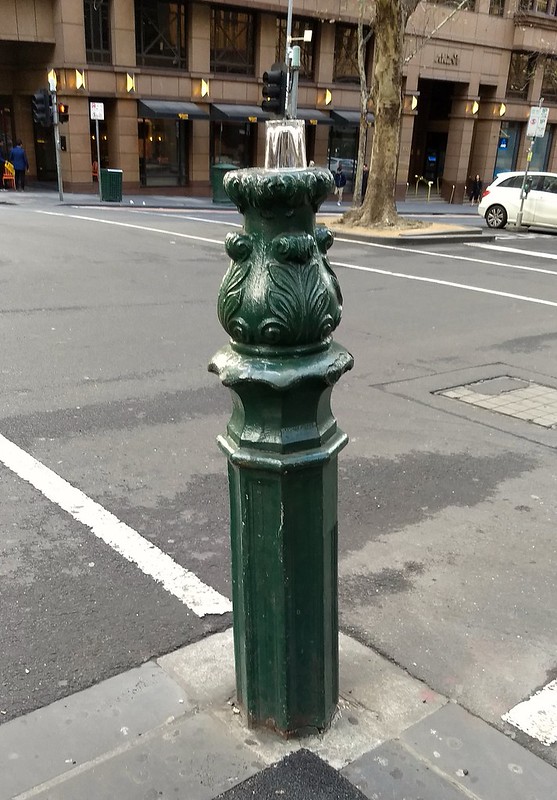 Thankfully not pedestrian areas in the CBD have fencing. This obviously blocks pedestrians as well as vehicles.

As I wrote after the January Bourke Street attack, if we’re serious about preventing motorists endangering or blocking pedestrians, not just maliciously but also via carelessness or thoughtlessness, then well-designed barriers which stop vehicles without barricading pedestrians are something to be welcomed.

14 replies on “Would anybody care about this load of bollards if they weren’t so fugly?”

It is possible to buy more attractive-looking bollards with much higher strength than their size would suggest, so I expect the council is looking at using such devices. The concrete blocks are clearly a temporary measure and I’m pleased to see the Lord Mayor confirming this. I expect that a truck would be able to shift one of these concrete blocks if it was aimed carefully and only had to move one of them at a time, so proper bollards will be needed in the longer term.

Query whether the existing bollards in your pictures would provide any protection against a deliberate attack by someone driving a truck. I suspect bulkier concrete blocks are here to stay, in one form or another.

Why not invite artists in to paint them? There’s no reason why they can’t be both functional and decorative.

They could even end up being a tourist attraction like Geelong’s Bollard Trail: http://www.geelongaustralia.com.au/bollards/default.aspx

Even though the Geelong bollards were created for artistic reasons rather than functional ones, they do give an idea of what can be accomplished with a little imagination.

Thirty-odd years ago, the government invited artists such as Howard Arkley, Mirka Mora, Michael Leunig and Clifton Pugh to paint Melbourne’s trams. Let’s do a similar thing with the bollards.

Great examples of bollards done well around the city, ugly is half the issue the other half is that accessibility requirements are simply ignored.
https://meltdblog.wordpress.com/2017/06/23/bollards-gone-bonkers/
The insult is that those two installations intentionally leave room for vehicles to enter the space anyway, as others have noted a planned or determined attacker is not prevented from entering the pedestrian space despite the bulk of them. Even when installing slender pillars the council doesn’t seem to understand how to use them properly:
https://meltdblog.wordpress.com/2016/04/28/doing-permeable-wrong/

All new bollards should be electronically retractable – by police, hospitals, council, SAS/military.

If we trust police to shoot down the Bastille Day attacker, we should trust police to operate the bollards every now and then for cleaning or maintenance or the installation of something at the building.

I’ve noticed the concrete blocks magically appearing at Flinders St. Station and figured they were for this reason. These would probably stop a car and would deter a larger vehicle too. They don’t seem to be attached to anything though. The much smaller green bollards seem to be to discourage cars from driving where they are not supposed to but they would probably be knocked over if one were driving through them on purpose though they would still discourage this. A large truck would probably knock them over easily. The bollards on Degraves St. are regularly pushed over by delivery trucks backing up. Of course one cannot totally the eliminate risk of an attack. If someone wants to cause harm there are many ways to do so.

Smaller bollards, made of steel and planted a long way into the ground, are capable of stopping trucks. They’ve been on the market for a long time and I assume they will be the product eventually used all over Melbourne. They will be more effective than the concrete blocks, will take up less space and will be far more attractive.

As Philip says, the more aesthetic steel bollards would need planting in the ground to be effective which might, I suspect, be complicated in many places by buried cabling etc.

Times square NY has also recently had large concrete blocks with NYPD stenciled on them placed around the sidewalks, you can imagine how they impair pedestrian flows along 7th Ave/Broadway! Of course in NY they are also accompanied by extra police armed with M4 assault rifles…

I’ll rephrase my comment: the council will HAVE to plant steel bollards in the ground if it wants this to work. Those concrete cubes look intimidating and would certainly stop cars, but they are only about 2.5 tonnes each and can slide along the ground. They won’t stop a slow-moving truck. They certainly won’t stop a forklift – that’s how they were put there in the first place.

@philip
We know that the concrete is temporary, its what will replace it that is at issue. There is talk about putting in equally bulky seating or planters as per comments from Lord mayor Robert Doyle: “We’ll look first at street furniture, planter boxes and rubbish bins, which can be reinforced and turned into unobtrusive but effective safety measures” (The Age) “Then we’ll look at versions of the green ‘heritage’ style bollards that you can see near Flinders Street Station and towards Princes Bridge.”
But these are area of significant pedestrian (and in some places cyclist) traffic of which obstructing their movement seems of no consequence.

If cars/trucks are the problem why aren’t they inconvenienced by the installations? Further reducing the already inadequate pedestrian spaces is a bad way forward for the city.

I doubt they’ll find a way to ‘reinforce’ planter boxes, rubbish bins and other street furniture if they’re all just bolted to the ground. They will be likely to need proper planting to give them enough strength.

I saw these earlier in the week, and my first thought was how much they look like the Maginot Line.

Arh, what about the cities income from J-walking fines??

These are sure to disapear???

In any case, I barely notice them. Sure they are there, but that is it.