Can we do more to keep cars out of pedestrian spaces? Part of what makes Friday’s tragic events in Bourke Street so horrible is that it could have been any of us who got hit. One can only have the deepest sympathy for all those affected.

I work on Bourke Street, and often go walking along it at lunchtime.

On Friday I was on Spencer Street on a tram coming back from Docklands when it happened. Two police cars and an ambulance passed our tram, then as the tram turned into Bourke Street it was obvious there was something going on – a large crowd had formed and many emergency service vehicles and staff were on the scene.

As I got closer, it appeared the incident was still ongoing. I shot this footage of police running towards the scene – this clip and stills would later get used on TV news and online. (I’d prefer a credit, but in the circumstances it would be churlish to demand it.)

On the ground amongst bystanders it wasn’t at all clear what had happened — at least having approached the scene from the west.

A lot of journalists follow my Twitter feed. As I was tweeting, an ABC 774 producer rang me and asked me to go on-air live to describe what I was seeing. I went on, and described the large number of police, that they were expanding the cordon pushing the crowds back, and closing off streets, which included closing off the front entrances of numerous buildings. It later became apparent that some of the injured were still being treated along the footpath where the car had travelled.

No firm info on the ground, other than many people saying they heard shots. Note this smashed up car. Hope everyone is OK. pic.twitter.com/H4JCdMGbHX

Numerous bystanders helped the injured, and in some cases ran to get medical supplies to help. They forever deserve our gratitude. You often see random acts of kindness in our big city — when something horrific like this happens is when it really counts.

There’s plenty of speculation and discussion about what motivated this tragedy, the bail the suspect was granted a few days before, and the police response, as well as the mental health system. John Silvester has a good article on all these issues in The Age. All that is worth picking apart to see how an event like this could be prevented in future.

I want to consider another issue which seems to be getting no attention.

Over the years I’ve written a lot of snark about CBD motorists pushing the boundaries, encroaching into pedestrian spaces. I never, ever imagined anything as horrific as this.

Normally it’s drivers being careless or thoughtless or clueless, but not malicious.

Being lunchtime, it’s not surprising large numbers of pedestrians were around. Being school holidays probably increased the number of children present in the city.

While nobody could expect this maniac to do what he did, I wonder if the infrastructure is appropriate, and if adequate protection has been provided for pedestrians to prevent motor vehicles accessing areas they shouldn’t go. 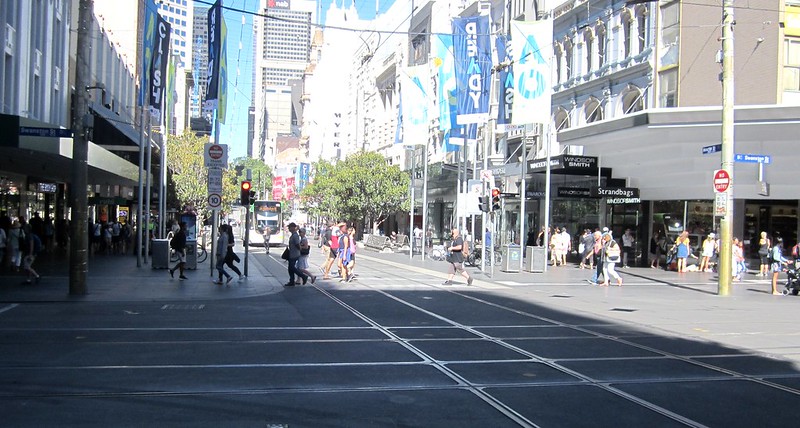 Despite cars being banned, it is very easy to drive into Swanston Street — in part because service vehicles need to access some parts of the street. And it is common to see bewildered motorists doing this.

It is also very easy to access Bourke Street Mall, which has theoretically been car-free since 1983. It’s protected only by signage — in a similar way to painted bike lanes and laws that don’t physically prevent collisions, that some cycling advocates describe as “Administrative hazard controls” — a term also common in risk management and health & safety circles.

Despite a mass of signage on approach, it is common to see vehicles enter the Mall, and drive through or even park:

Another motorist takes a shortcut through the Mall. #Melbourne pic.twitter.com/9wQx3U0jcH

Just another day in the premier pedestrian/transit mall of the world’s most liveable city. pic.twitter.com/9Wgf4djBMI

Just another motorist off for an afternoon’s drive through the Mall. #RoadMorons pic.twitter.com/2lgvRkYv25

It’s not just a problem in the CBD, and Friday’s incident is not the only recent one involving an erratic driver in a pedestrian mall. In northern suburban Coburg in 2015, a driver fleeing police drove through a pedestrian mall, hitting a pram which was thankfully empty.

Toddler ‘lucky to be alive’ after erratic driver ploughs through a Coburg pedestrian mall https://t.co/HrHBY98M3D

Many cities employ tactics such as movable bollards that can drop into the road to let authorised vehicles through. Judging from this video, they seem to be quite effective.

This would only work on Swanston or Bourke Streets with some careful design. The frequency of trams would mean they’d be likely to cause delays unless they were somehow positioned and synchronised at tram stops with the traffic lights. Perhaps an arriving tram at the stop could trigger the bollards to open, with them closing after the tram had departed.

Even if only possible at the tram stops (in Bourke Street Mall these are at the western end) it would prevent unauthorised vehicles using it as a thoroughfare. (There’s certainly very little enforcement.)

Alternatively there might be options for fixed bollards which allow trams to easily enter, but discourage or at least slow down other vehicles. Currently we have narrowly-placed structures on the bicycle ramps onto the Swanston Street tram platforms; these are very effective at keeping cars off the stops. 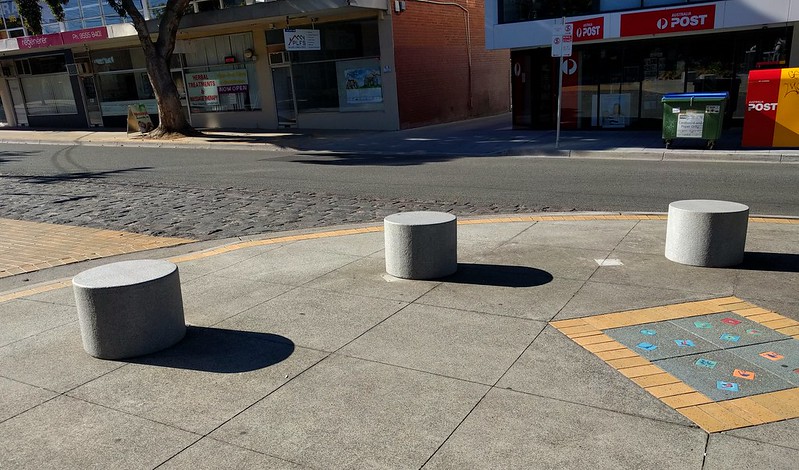 Even in the somewhat neglected Moorabbin shopping centre there are bollards in place to prevent vehicles entering pedestrian spaces.

Of course any such methods need to allow through emergency and authorised service vehicles where required. (The current design at the northern end of Swanston Street doesn’t stop cars, but can delay ambulances when they get stuck behind trams.) 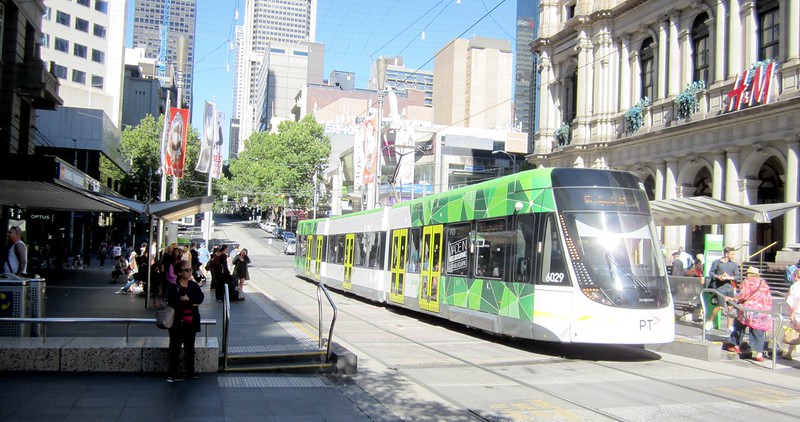 I don’t know precisely which path the car took, but perhaps we can be thankful that the busy tram stops at the western end of Bourke Street have barriers at each end of the platform.

Barriers also prevent a visible impediment to cars getting up the ramps onto other platform stops, though I don’t know if they’re crashproof.

As noted above, the bicycle lane onto the Swanston Street platform stops is too narrow to allow through most vehicles. (Some motorists who ignore the signs actually get stuck there.) 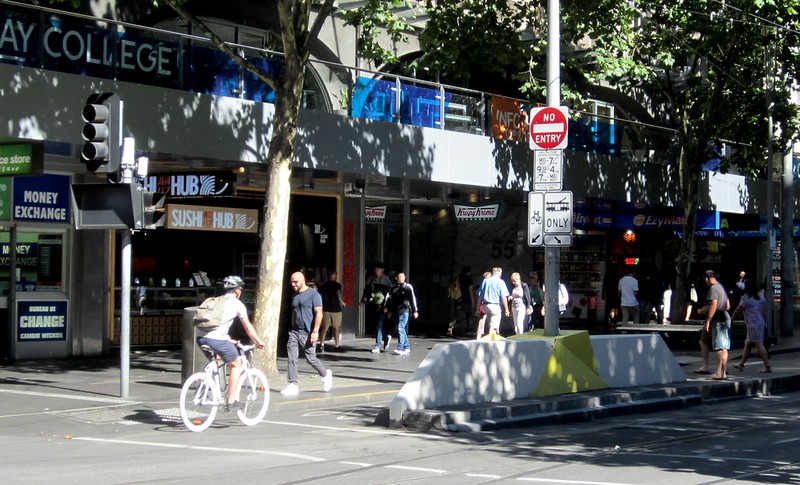 What of the footpaths? It sounds like the car drove a full two blocks along Bourke Street on the southern side footpath, though it’s unclear when it left the road.

Intersections and pedestrian crossings need ramps to be wheelchair accessible. But is there something that could be employed to prevent a motor vehicle using them to mount the footpath?

Pavement edges are usually sharp, and might prevent a typical car mounting them at speed without doing some damage, but in some locations the edge is much more curved, more like a ramp.

An example I noticed years ago was the Tooronga Road bridge over the Monash Freeway, built in the 1990s — and this section newly completed as part of the Bentleigh level crossing removal also shows this design.

If we don’t want cars mounting the footpath, why is it like this? To prevent damage to vehicles that hit the kerb? Should that be the priority? 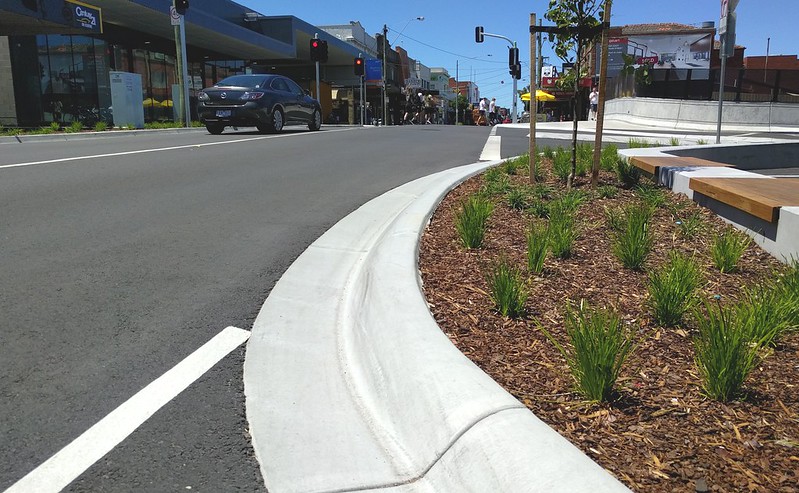 Many public spaces have had skateboard prevention brackets fitted to walls, steps and other surfaces. In most cases they don’t prevent other uses such as sitting. These seem to have been a fairly recent development, yet are cheap and effective.

There may be similar emerging technologies that can be employed to keep cars out of pedestrian areas and off footpaths, while not inhibiting the movement of pedestrians including those with prams or mobility aids.

Of course care must be taken to cater for service and emergency vehicles that may need to access these spaces, or pass through them to bypass traffic.

And we don’t want to over-react. Even bearing in mind last year’s horrific incidents in Nice and Berlin, Friday’s incident doesn’t necessarily mean that malicious drivers are a huge problem or that we should destroy Melbourne’s streetscapes for what is a very rare set of circumstances — or indeed that we can protect against every scenario.

But there is no shortage of clueless and careless motorists entering spaces they shouldn’t. It is worth considering whether the infrastructure currently in place is appropriate to properly prevent this, and protect pedestrians.

19 thoughts on “Can we do more to keep cars out of pedestrian spaces?”