(McKinnon opened a few weeks ago.)

At Bentleigh yesterday, it was still a construction site. 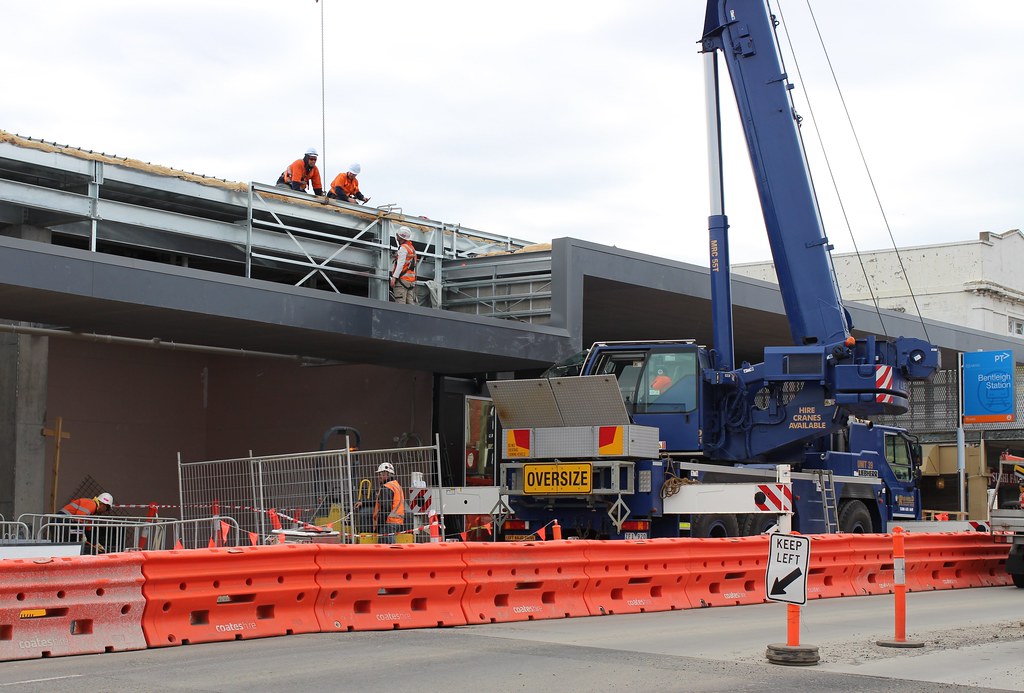 But today the concourse was awash with officials handing out cupcakes, a choir from Sing Australia, train spotters snapping photos, and passengers relieved to have their station back. 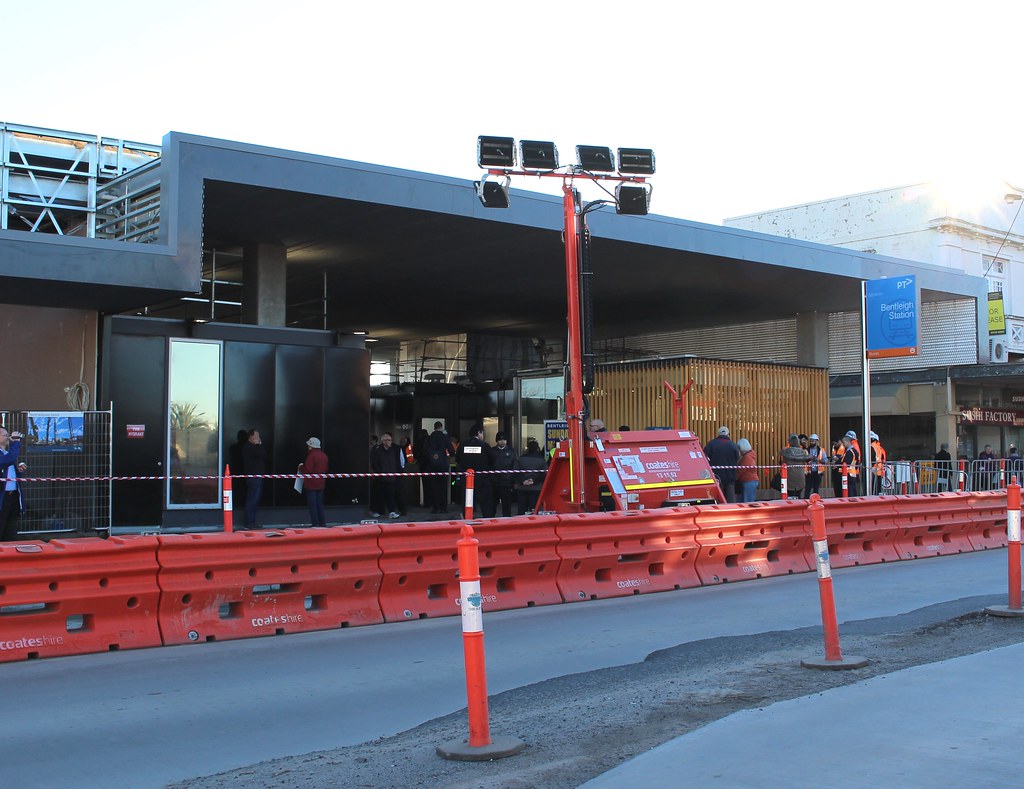 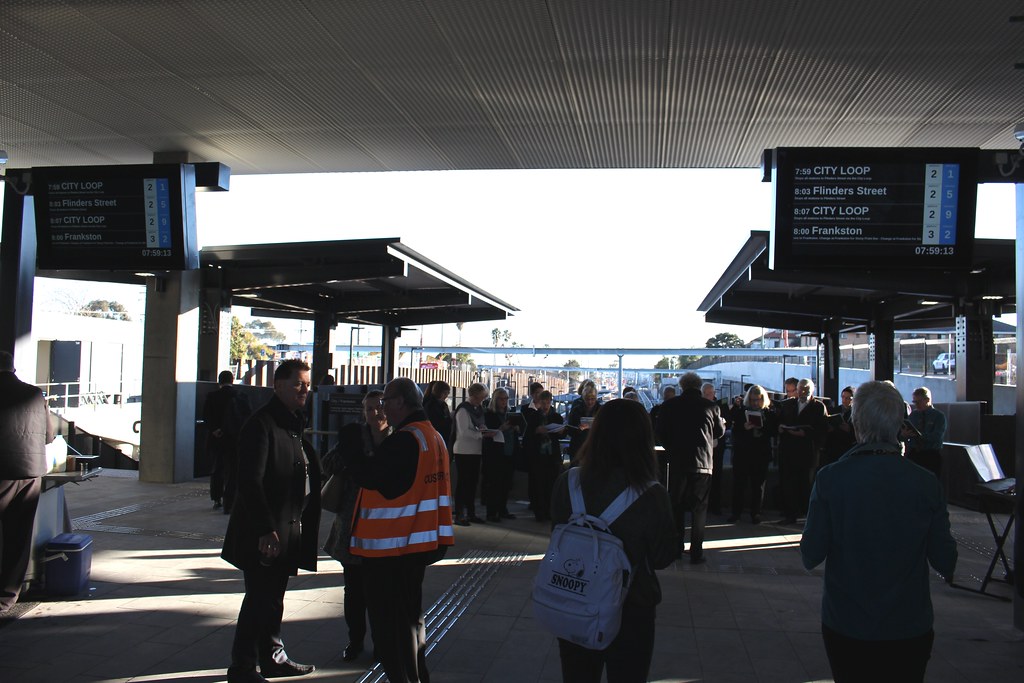 Bentleigh is the only one of the rebuilt three stations with Premium status, meaning it’s got fulltime staff. Curiously the booking office is adjacent to the bypass gate, but evidently the bypass gate is not designed to be operated from inside the office as seen on some other systems. Maybe that’s an improvement to come. 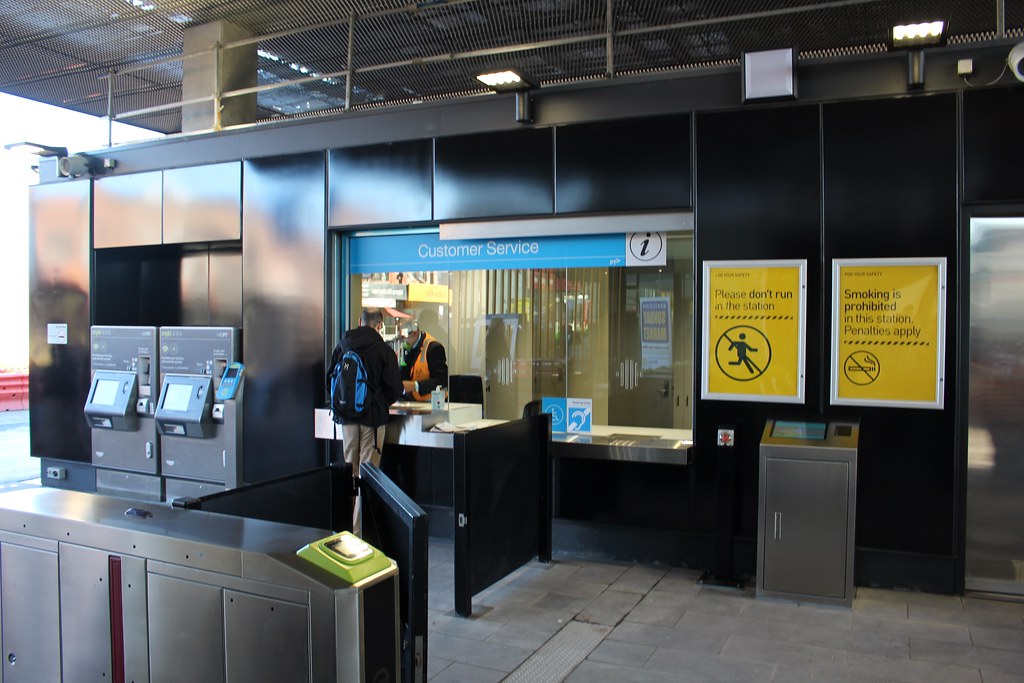 Bentleigh and Mckinnon stations have ramps, lifts and steps down to platform level. The ramps, meeting DDA standards, are pretty long, but some people were using them in preference to the stairs. (Ormond will have two sets of lifts, one on each side of North Road.) 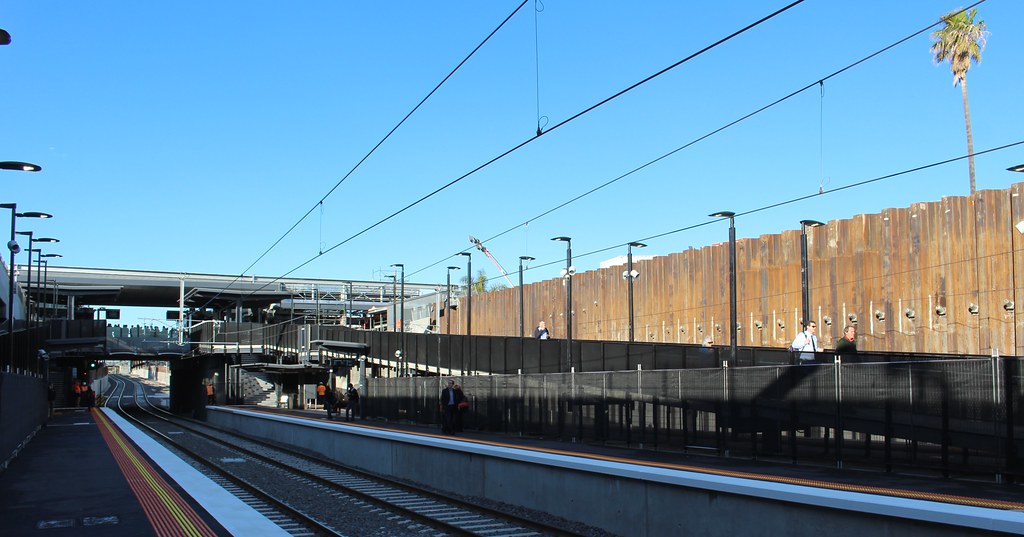 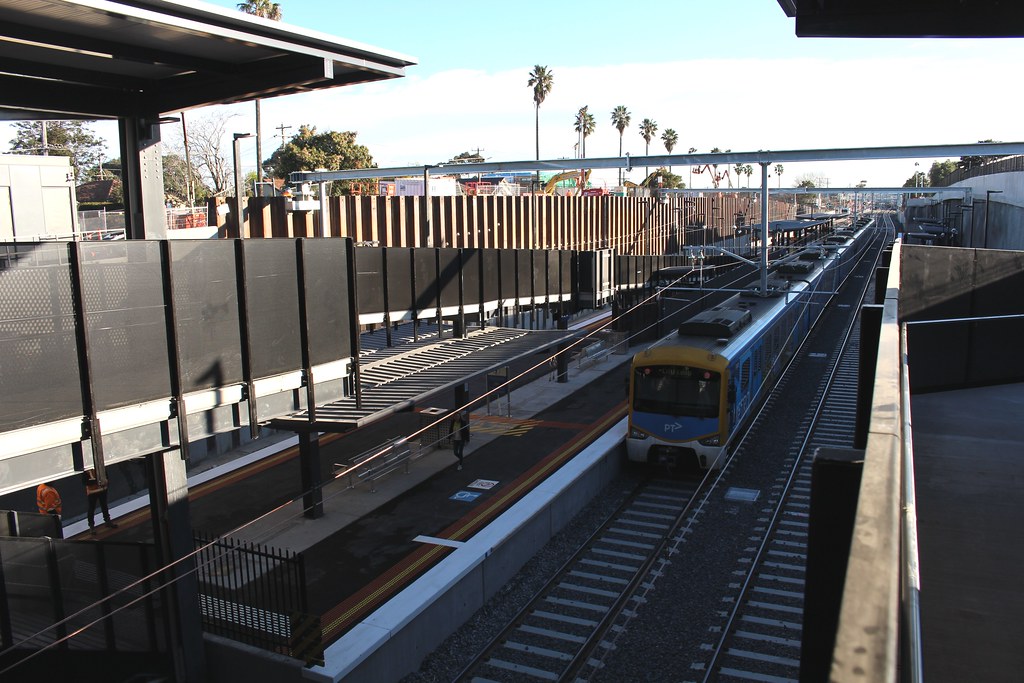 While I was there, the Frankston line’s only X’Trapolis train came past for a visit. 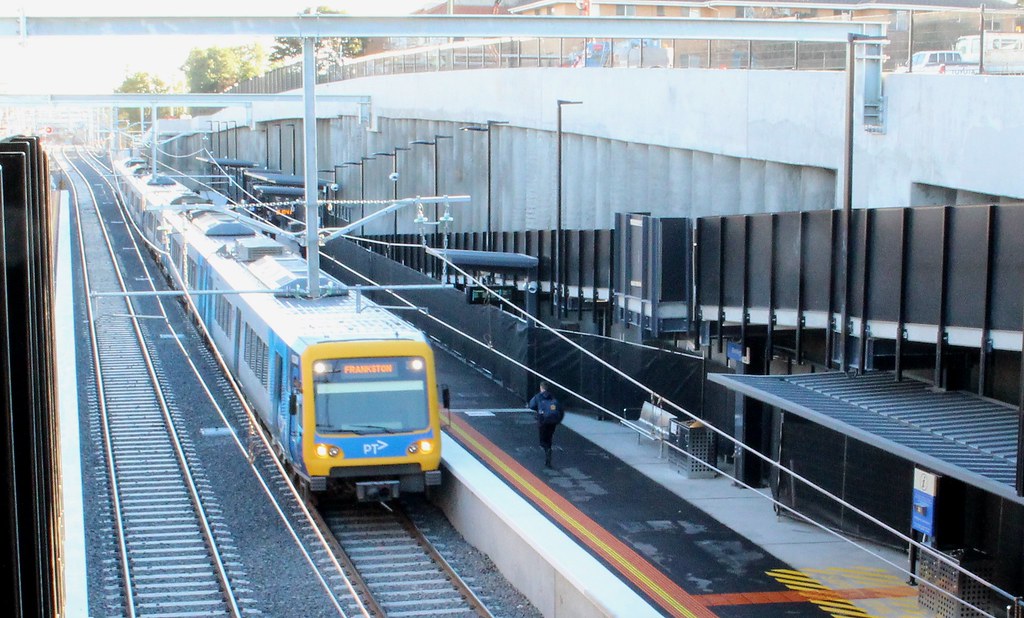 At Ormond station, much of the platform area is under North Road, giving it (moreso than Mckinnon) the appearance of an underground station like Box Hill. (I heard both pro-skyrail and pro-trench rail opinions from passers-by.) 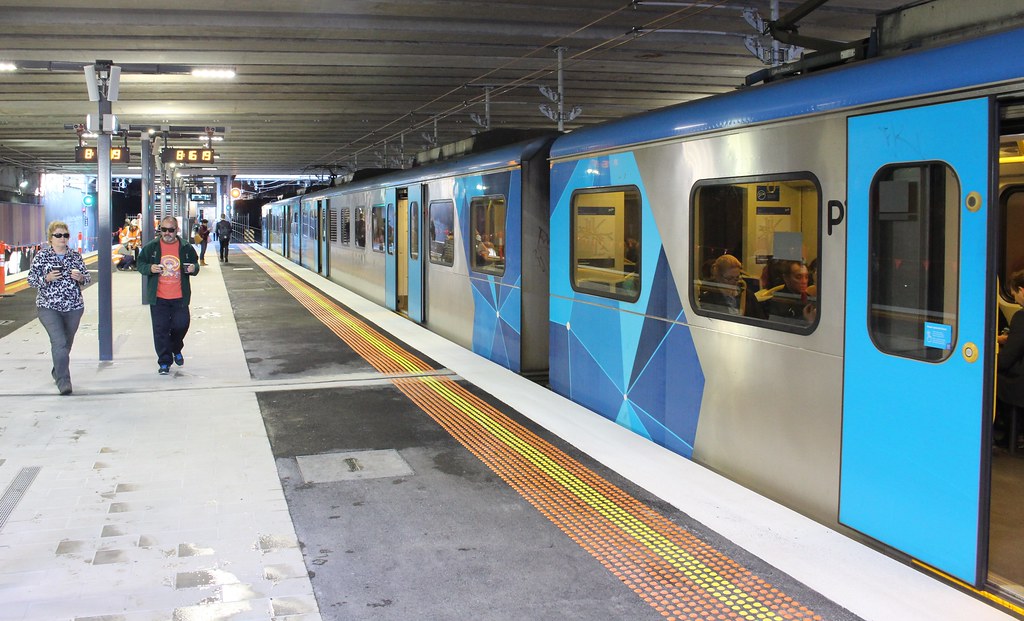 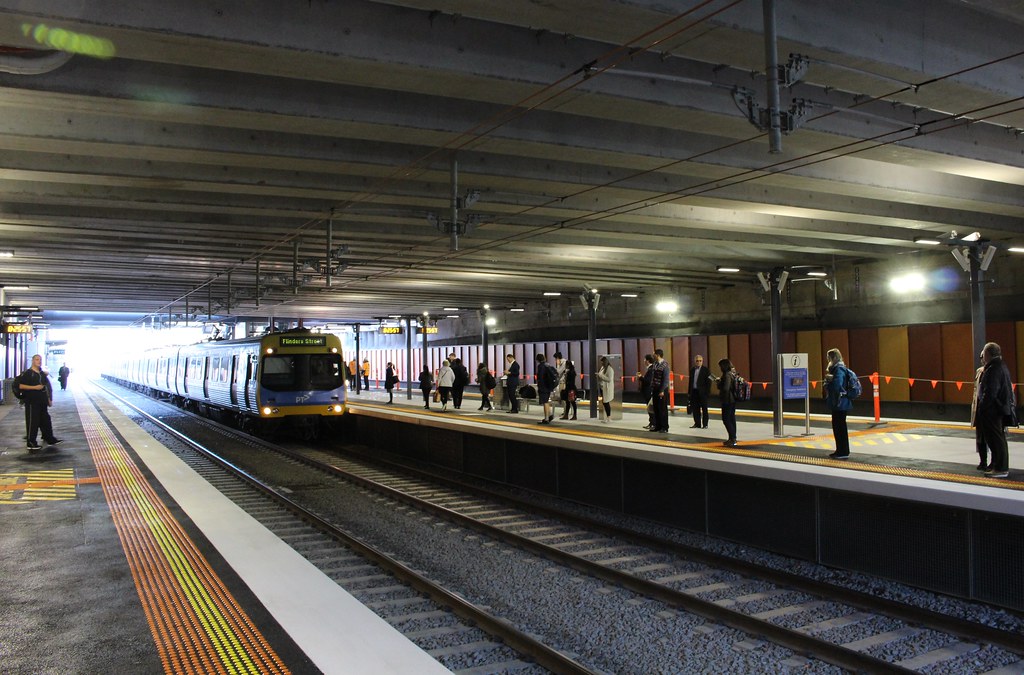 More music and cupcakes at Ormond, but how many cupcakes can one eat in one morning? Works are obviously continuing.

It’s great to see these stations re-opened. It was smart thinking to get them functional enough to handle passengers, and then continue with minor works while the stations operate.

Members of the project team that I ran into this morning seemed very pleased with the results, and so they should be.

After three months (Bentleigh) and five months (Ormond) with no trains, the locals seem very pleased to have them back.

And if you’re wondering, the peak hour express trains (and third track) return next week.

The project manager told me they did indeed originally plan to re-open on the 31st, but decided opening mid-week didn’t make sense, so tried to get enough done to open today instead. It might have cost extra money to bring it forward, but they’ve probably saved on two days of bussing costs. Even when only Ormond and Bentleigh had replacement buses, there were quite a few in service at peak times (plus despatch/customer service staff).

15 replies on “A quick look around the new Bentleigh and Ormond stations, opened today”

On another note, going by news last night. Murrumbeena and Carnegi stations are now closed for a month.

Will you be at the RMIT tonight (monday) to see Tim Fisher launch the papers for ‘Rail Futures’?

It should be a fun evening.

Why didn’t they monetise these stations with retail / apartments above the line? It’s sunk low enough so what other reason could there be?

“All three stations have ramps…”
Actually, Ormond doesn’t have ramps, only stairs and lifts.

As far as I could see, on the south side of North Road at Ormond, there is only lift access to Platform 3. If you want to take the stairs, you have to go via the north side. I guess platform 3 won’t get a lot of use once platform 1 gets into operation, but it still looks like an oversight.

@Dave, there is high-rise development proposed at Ormond – see this post.

Mckinnon and Bentleigh also possible, though likely to be smaller scale.

@Rod, you might be right… but yes, platform 3 barely gets used under normal circumstances. (During the design phase they thought they couldn’t do a south-side entrance at all. I actually said to them if they can’t squeeze in a platform 3 south entrance, then just do it for platforms 1+2, given almost all trains and passengers use them.)

Daniel, you may have mentioned this in the past: Will the new stations cut travel times since trains don’t need to slow down as much as before?

@Roger, I wouldn’t imagine that it will make much difference. Possibly train drivers would approach stations with a level crossing straight after them a little more cautiously, which no longer need be the case. The other factor is that the trains might take a little more time to accelerate up and out of a station.

I will have to now consider voting Labor in state elections after years of do nothing Liberal Governments.

What about parking at Bentleigh station? With 1,2, hour parking etc the most liveable city in the world has the most unlivable parking problems

Now that the major works are finished, I had a hunt around to see how they had included the so-called ‘passive provision’ for a future 4th track (if it’s ever required).

It appears they only made allowance at the bridged/decked sections. Under these sections, a 4th track would be possible if Platform 3 was removed, and Platforms 1 & 2 were slimmed down a little.

Just about everywhere else, the trenches would need to be widened to accommodate a 4th track. Near McKinnon, this would also require property acquisition.

[…] 2-3 months after they all re-opened, Ormond, McKinnon and Bentleigh stations are still being worked on. […]

[…] The rebuilt Ormond, McKinnon and Bentleigh stations opened in August. […]

[…] the 15th of June was a foggy morning. This is Bentleigh station, well before it got rebuilt below street level, and with Hitachi trains still […]

[…] a steam train ran to celebrate a year (and a bit) since the new Bentleigh/McKinnon/Ormond stations re-opened, following level crossing […]