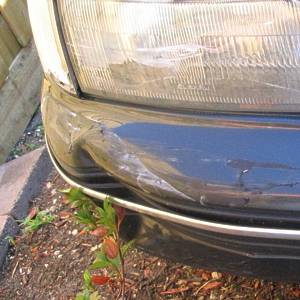 Well, I said this month would be car maintenance month.

Four nice shiny new tyres plus fitting plus whatever other surcharges they tack on: $544.

200,000 Km service, including ultrasound analysis of the fuel injection (!) and numerous other tinkering: $842. (But it does purr like a kitten now.)

But I’m still better off than my sister, who had a prang in her car. She was okay, but shaken. The car has an $1800 dent in the front bumper/headlight/etc. And while the insurance company will cover most of it, she’s going to be left with the $400 excess, unless they can track down the other driver, who witnesses confirm was at fault and did a runner.

If you drive a 1990ish white sedan with a licence plate which is similar to (but not) EEU 832, you’d better give yourself up before she finds you — she’s mean when she’s angry.

4 replies on “The trouble with cars”

Do you mean you know the number plate but aren’t publishing it, or you don’t know it? Because if you know it, just report the crash to the police and they’ll do the rest.

I know this is not the topic, but I wanted to share with all of you that our Residence Visa has been accepted. Hopefully we will be in Sydney by the end of May. We would like to go to Melbourne later to live… :)

Philip, she thought it was EEU 832, but the policeman said it doesn’t match up, and apparently at local police stations they’re unable to do wildcard searches (which surprised me, frankly).

Roby, you should start an English language blog!

I assume you will but very curious if the widespread readership of this blog results in tracking down the abscondee. I hope the number doesn’t end up like Jenny’s 867-5309!