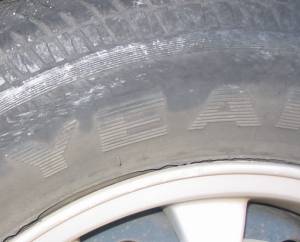 April is car maintenance month for me.

First thing will be new tyres. I don’t do a lot of driving (in the region of 10,000km per year, which is apparently about half the average), but the tyres date back to last century. The front-left deflates rather too fast, and they are failing the matchstick head test, so I am almost embarassed to take the car in for a service with such worn tyres, given that the service guys have previously pointed out such problems. Not to mention the whole safety thing.

After that will be a service. I’ve long taken the view that if I have to have a car, preventative regular service is good for keeping it running reliably and efficiently. I’d much rather spend $ARGH every year or so on a proper 10K service than have it break down when I’m in a hurry somewhere and suffer consequent loss of wages and hassle, which would cost at least as much.

Alas, apart from getting past the due date for a service (the magic 200K this time round, in fact), the car has been complaining a bit. Spluttering a tad, like it’s been threatening to stall. Not good, and I suspect I’d better clear my Visa card for action this time round.

I also discovered a dirty little secret about my car. I’ve discovered the airconditioning uses CFCs. I gather there are ways and means of having it upgraded to be CFC-free. Something to look into.

PS. 9am Wednesday. And I just discovered a crack in part of the dashboard. I’m starting to think my car is moving into its autumn years. What’s thirteen in car years? Will it soon need the vehicular equivalent of a hip replacement?

Given the age of you car, it would surely be due for an air con re-gas anyway. Much of the cfcs will have leaked out. But some part has to be changed too. I forget what now.

Have you ever thought of looking at new or almost-new cars? It may be worth it in the long-run to trade it in for a newish small car (hybrid maybe? bit pricey IMO) that you can drive everywhere instead. Then once you have a car that isn’t too expensive to run, you can say goodbye to Connex, Ventura, Yarra Trams & Metlink forever :P

Nah. If anything I’m looking to reduce my car use, not increase it. For my own personal health, and for all the other benefits to society of PT/walking/bicycles.

And given reduced usage, there’s no way I could justify buying a new/near-new car.

Timing belt – fan belt ? something has to be replaced on the ol magna about that amount of k’s. check as you book in what service requirements are – it could hurt….

Your air conditioning may use CFCs, but while it is sealed and working they are contained.
It is only when the system is opened that they escape and cause problems.
Of course, when the car is finally junked, the responsible thing to do would be to have the system drained and the gas stored.
Usually that does not happen.
New cars mean more of our precious resourses are used.

Yeah don’t bother getting the air conditioner converted to new refrigerant unless it’s not working. If it’s not working, the refgirerant might be gone already. If it is working, leave it that way. The old refrigerant (R12) works better than the new stuff (R134a) – in other words it is more efficient – so to just put R134a into your system would increase the temperature of the air it pumps into the cabin. There is another gas I’ve seen on signs at workshops – ER12 or something – which should work in a system designed for R12 but has no CFCs.

But while the stuff is still in the system and it still works and the seals are all good, leave it as it is! That’s what I’m doing…

I recall a rule-of-thumb that said that around 180K the excess maintenance costs exceed the financing costs of a replacement (not new, just new-ish) car – at that odometer reading, you’d start seeing major engine, transmission, suspension and brake work becoming necessary. But that rule of thumb is from olden days, so it might be worth asking around about your vehicle’s expected longevity.

Cathy’s old car had massive brake failure, requiring $800 worth of repairs to the system. I tried to convince her to buy a replacement car instead of fixing it (because that was her near-future plan) – a year’s worth of interest on a car loan (given the amount she would have borrowed) would have been less (and she would have paid the principle off within a year). But I guess she wasn’t pyschologically ready for a new car, so the old heap-of-crap got new brake system, only to be retired a year later.

Cars age six times as fast as people do for their first 8 years, and then one year for one year. Your car is 53.

This makes my car 56. Hmm… getting on to old-fogey territory. It still beats stuff that’s brand new off the lot, though.

Josh, that theory might be right, given that about 3 years ago I had to replace the engine.

Well, heres another idea Daniel. Fix the existing car up, set a goal of using the car as little as possible except for necessities, and buy a bike. You could do it as a PTUA publicity stunt if you went for a week (month?) without driving doing all your usual habits to prove that services (esp. buses & night) are in need of improvement :). And from using the bike, you would become more fit :)

My car is the same age as yours, Daniel, but it’s a Camry. The servicing and repairs bills are still pretty ok, and it runs well. Now that I’m in Melbourne, near good public transport, I’m looking at using it as little as possible, but keeping it until it properly dies.