It’s Labour Day today in Victoria, marking the reduction in working hours during the 19th century to 8 hours, and the relaxation of working conditions, which in the 1840s were strict:

Conditions of the time were governed by the Master and Servant Act. Employees in Australia in 1840 who left their employment without permission were subject to being hunted down under the Bushrangers Act. As little as one hour’s absence by a free servant without permission could precipitate a punishment of prison or the treadmill.

Thus this monument at the top of Russell Street in Melbourne marks the achievement of 8 hours work, 8 hours recreation and 8 hours rest. 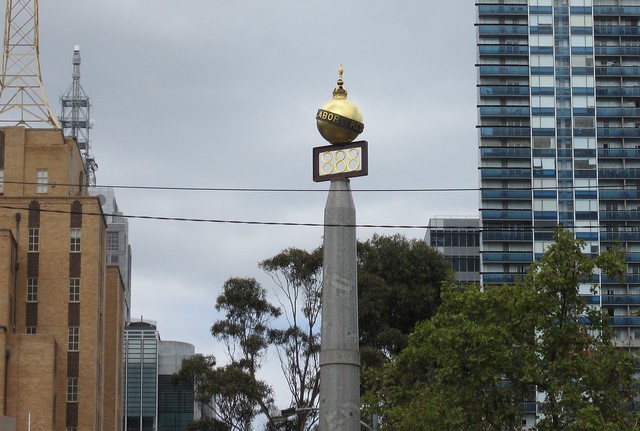 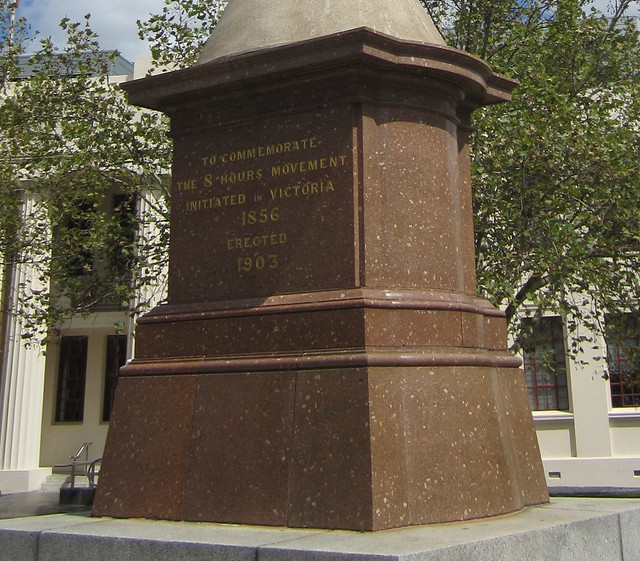 If it were created today, it’d probably be called Work-Life-Balance Day or somesuch.

And it would probably be something more like 7.6 hours work, 2 hours commuting, 6.4 hours housework, babysitting and recreation, and 8 hours rest. 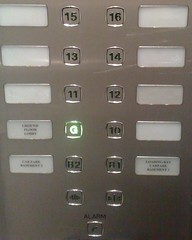 The other day some colleagues were having a little rant about the lifts, which in recent weeks have been performing badly.

I blogged about this ages ago — in many buildings the problem is not the position or size of the lifts, but how they’re programmed. Evidently in 13 years, not much has changed.

Apart from simply responding to the call button, lifts should have a few basic assumptions programmed into them:

Before 10am, and between about 1pm and 2pm, lots of people will enter office buildings and want to go up, so the lifts should default to the ground floor.

The ground floor is where most people enter, so the system should not assume that because one lift has responded to a call, it can cope with everybody entering. More lifts should respond, and they shouldn’t make people play that game of waiting for the first lift to depart before being able to press the call button again.

It would also be useful to have lifts default to the non-ground floors (perhaps evenly spaced, and even ignoring unoccupied floors) at peak exit times such as between 11:30 and 12:30, and after 4pm.

Optionally, they could get a little smarter, for instance learning the patterns in the building, which floors are quiet and busy at which times of day.

Really, how hard could it be?

Those people selling The Big Issue can be quite innovative. It’s a wonder some of them aren’t earning large amounts of money in advertising. On the steps of the GPO today at lunchtime, I found a skinhead selling it doing the Macarena to attract attention. If I’d had $2 in change, I would have bought one, honestly! And if I’d had a camera with me, I would have preserved the moment for prosperity.

I’d much rather be out wandering around than in the office. There’s nothing to do. Of the three tasks I have allocated to me at the moment, the progress of all of them is currently in the hands of other people. I’ve once again asked to be let go, to go to another job, and it’s been denied because they believe that heaps more work will shortly materialise. I even offered to go part time, and this was knocked back because, would you believe it, apparently the resource utilisation paperwork can’t handle someone who’s working less than fulltime!

The situation is similar for the two colleagues who sit with me, but one is making his escape at the end of the week, and the other is stuck here longer than I am. We’re keeping ourselves sane by looking out the window, taking the piss out of the attendant in the carpark down below us, and we’ve all written programs to show how many days/hours/minutes/seconds we each have until our contracts expire.

We’ve also found a broken chair, one of those ones that suddenly goes back when you sit on it giving you a heart attack, and we’ve put it in our little area and have been luring people in to sit on it. One guy fell for it two days in a row.