Before blogging and the web, there was email and Usenet and FTP sites.

Just over 29 years ago I started writing online, sending out literal undergraduate humour to mates at Monash University and beyond mostly via email, under the truly ridiculous name “Toxic Custard“.

It got into the student newspaper, then in 1996 it went onto the web and became the early version of this blog. Along the way the content has continued to morph, to more autobiographical material, and more recently a concentration on transport.

The email list still exists… and to my surprise it’s still got about 600 people on it.

But I’m shutting it down – because it requires manual intervention to crank it up and send it out, which I rarely get around to doing, and because it relies on YahooGroups, which recently announced most of its features are being shut down. Emails to lists will be the only thing left, but it’s probably pretty safe to say these won’t last much longer. It’s obviously not a business Yahoo wants to be in anymore.

Edit: In classic Yahoo style, the final email to the list took almost 24 hours to be delivered.

The blog will keep going. Those wanting to receive posts by email have a couple of options:

Subscribe to all posts – I’ll be sending out invitations to this to those on the old list.

…or you can subscribe to just transport posts (via MailChimp):

There are also options to get new posts via RSS feeders (just add this URL), and I promote most of them via Twitter and Facebook. Edit: Of course you can just read it on the web.

I also occasionally blog on technology and various geeky tidbits at geekrant.org

Thanks to all who stayed on the email list over the years.

Welcome to the year 2015. Sounds so futuristic, doesn’t it.

A while ago, last century, I wrote a short story called The Year 2031, about a space mission to Venus, published in 19 weekly parts in 1998 as part of my (still going) Toxic Custard weekly email newsletter.

Reading back over the opening paragraphs, clearly I am not the world’s best futurist, though so far, some of the predictions still look okay.

It was the year 2031. Nothing much had changed, really. Technology was faster, more sophisticated and cheaper, and people still didn’t know how to program their videos. Something new and incredible was being done with microchips every day. They’d figured out how to give everyone on the planet affordable Web access, and if they could just figure out how to give them all affordable food, the human race had a real chance of going places.

So far so good, I stand by most of this. We don’t have “videos” (VCRs) anymore, but I think people still have trouble with PVRs. I suspect the difference is fewer people now want to record TV at all, thanks to DVD box sets, and iView and other services allowing you to watch later.

The Middle East was still a powderkeg and nobody would back down over Northern Ireland. More significantly, McDonald’s was in real danger of reaching the critical mass of hamburger restaurants, and were about to begin their plan to diversify into pizza. Talentless saps still ruled the music charts. And everyone was still burning up the world’s increasingly precious oil stocks like there was no tomorrow.

Northern Ireland is pretty peaceful these days. McDonald’s probably reached Peak Burger some time ago, at least in Australia, and are exploring new ways to make money, including opening an experimental cafe in Sydney.

Peak Oil is a bit less certain, I think, but it’s certainly still being burnt up with little thought to its longer-term impacts.

But on the space exploration front, NASA was kicking arse. Although they’d developed computer graphics simulators so realistic they could virtually just simulate all their missions instead of actually conducting them, they knew that if anybody ever found out, the government would want all the money back. So they kept on sending up rockets.

In 2012, one entrepreneur had even organised a civilian excursion onto the moon. A kind of moon picnic for anyone who could afford the astoundingly expensive fare. It had been a bit of a disaster though – halfway to the moon somebody had pressed the wrong button, and the hundreds of sandwiches had gone flying off into space. Everyone had got back safely, but boy were they hungry when they touched down. Nobody had tried that since.

There are civilian moves into space, priced for the super-rich only, but they haven’t started yet, in fact Virgin Galactic had a setback last year which means it probably won’t happen any time soon.

A manned mission to Mars had finally gone ahead in 2015. It had proven beyond all doubt that there really were no little green men – not that we should discount the existence of red dust creatures or something equally improbable and not perceptible to man. After this, NASA started to look towards Venus for the next mission.

Still only unmanned missions to Mars so far. The current thinking appears to be that a manned mission won’t happen before 2025, and NASA isn’t looking at it until well into the following decade.

Admittedly it’s all a bit undergraduate, but re-reading the story today gave me a few laughs from jokes I’d forgotten I’d included.

Apologies for the colour scheme.

Those of you who read the blog regularly might know that it started in my university days in 1990, with a twice-weekly email called the “Toxic Custard Workshop Files“. You can still subscribe to it, via YahooGroups — it’s got about 650 members.

I never quite imagined when I sent the first edition that it would still be going 24 years later.

These days the email is mostly a compilation of my blog posts. But it’s been increasingly harder to find the time to compile it — as it includes pulling the posts off the web site and adapting them into something readable in plain text. The emails have become very sporadic.

I’ve got a solution to the email problem. Computers these days are smart, so I thought there must be a service out there that will compile an email from a blog via an RSS feed. And there is.

So, from next week, I’ll be trialling a service called MailChimp. It can compile an email from a blog’s RSS feed, which I’ll then perhaps fiddle with just a little, and forward to the mailing list via YahooGroups.

In the future I may change it to be fully automated, but that would involve moving the mailing list from YahooGroups to MailChimp. We’ll see.

The biggest visible change will be that from next week, the emails will come through weekly, and will be in HTML format. (Can everybody read that nowadays?) A link is included to a web copy if the email gets munged. Here’s what it looks like. I wouldn’t say it’s beautiful, but it’s readable. 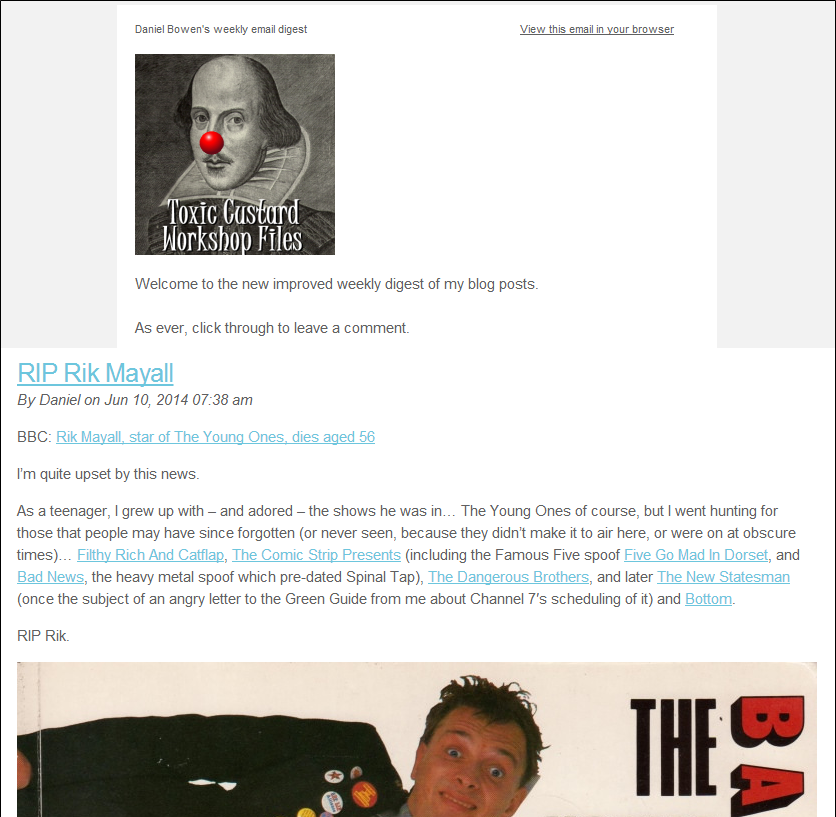 Theoretically a plain text version is included, though indications are from what I’ve seen is that it’s not very readable. I’ll see what can be done about that if a large number of people need it.

Exactly twenty years ago today, on the 12th of August 1990, I posted my first online writing — under the distinctly odd title the Toxic Custard Workshop Files. Being well before the Web, it went to a handful of people at uni via email.

Well, back in them days of ’90, I was in the second year of my course, a Bachelor of Pretending Cobol Is Structured, failing Photocopying 215, and me and me mates had just discovered the Internet. We suddenly realised that there was more to computer networks than just using Phone and Talk to annoy people in the next room, or sending Mail to tell people to meet you for lunch and Tetris at the corner shop.

I was messing around with my mate Bw.. err Brian Smith. Hi Brian, if you’re reading. And another pal of ours, Ray Chan, who was in an Electronics, Robotics And Other High-Tech Stuff course, came up with an idea for an electronic magazine, called “The Serial Saga”. Hi Ray, if you’re reading. We thought this was great, and immediately mugged him in the corridor and stole his idea. Ray never actually wrote anything, but did manage to create a monster robot which went berserk the next semester, and killed 5 lecturers due to a faulty diode in its corduroy detection circuits.

Ray actually vanished completely, at least from where I’m sitting. I’m still in regular contact with Brian, though he went crazy and emigrated to the USA about ten years ago.

The wacky title dated back to my last year of high school in 1988, when Mark Bainbridge and David Holicek and I planned to do an amateur comic sketch video show. It never actually happened.

My early writing drew on inspirations from uni, as well as some recycled material from high school, with a good dose absurdist Pythonesque influence. Some of it was fairly juvenile. As was I.

The Internet as we know it today — an unparalleled worldwide high-technology time-wasting device — was in its infancy. I recall frequently having to explain to people the concept of this new-fangled “email”.

Over the years my writing slowly matured and moved from the surreal into the real world, the humour that was deliberately infused into everything was gradually toned-down, and now the blog has taken over just about completely.

I dabbled in a lot of technologies as they came along — never the first, but often early: the web site came along in April 1995, and shortly after that the first diary/blog entries. Tried what is now known as podcasting in 1997. Blogged the 1996 election. Issued an official screensaver in 1998. Online video? 1999… originally in RealVideo format, which probably nobody can play anymore, so here it is on YouTube:

Most (all in fact, I think) of my old pre-blog absurdist writing is still online.

And even now, I occasionally meet people who tell me they used to read the Toxic Custard list, or Usenet posts, back in the 90s.

Some of my favourite Toxic Custard highlights:

The twenty-year-old email list still exists, by the way, mostly as a weekly compilation of my blog posts here and at geekrant.org.

Trivia for you: Back in prehistoric times, when most of you had never heard of the Internet and barely anybody used the Web, and way before Twitter and Facebook, I blogged the 1996 Federal election campaign.

Several times a week I’d add something new, including a spoof leader debate transcript, a Hippy Party manifesto, Ron And Jeff on voting, and advice on what to tell How To Vote hander-outers when you don’t want one.

It went almost-unnoticed because so few people were online at the time, but it did get a write-up in The West Australian (sorry it’s fuzzy; I’ll try to find a better scan):

When you throw two random words together, the likelihood of someone coming up with the same combination is, I think, fairly low.

A great way to think up a dot com name, I reckon.

Which is why I did a double-take when I saw this: 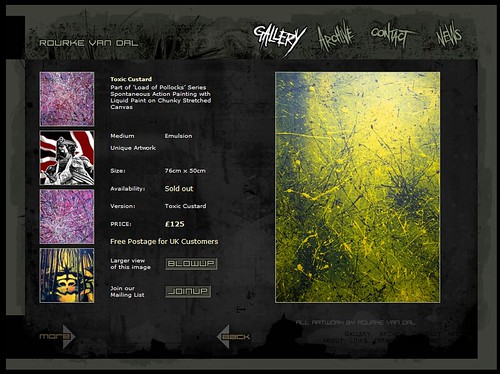 (Originally here, but now only visible in the Google cache.)

What it means, and if it has a link to the Toxic Custard web site and email list that I started in 1990, I really don’t know.

There’s more of the Rourke Van Dal’s work here and here (quite Banksyesque), and on his Myspace page.