Why is it that at most traffic lights, the crossings for pedestrians are so narrow?

Even in Melbourne’s CBD, where heavy pedestrian numbers are expected, most crossings are far too narrow for the number of people. 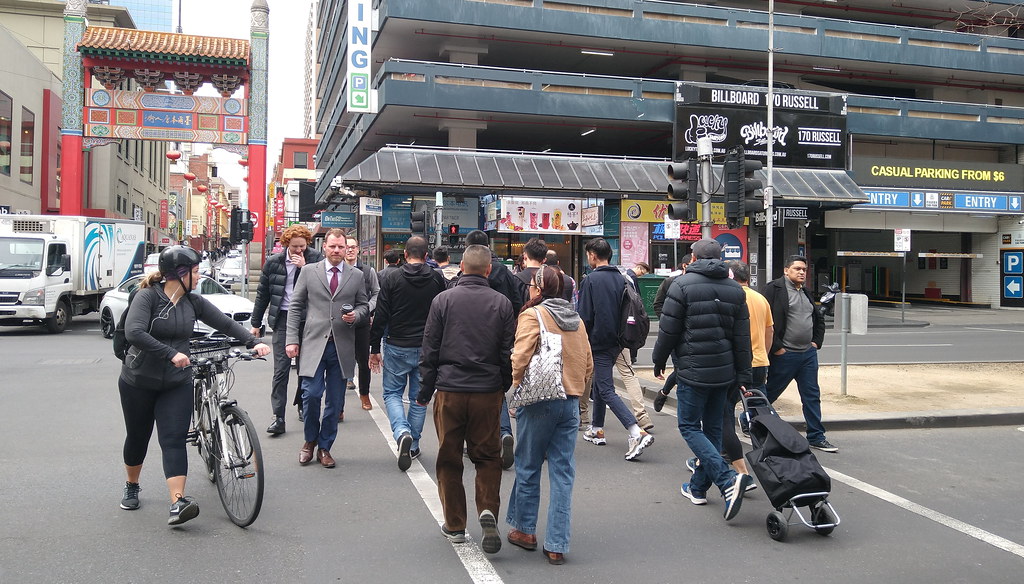 It appears that technically, anybody crossing outside the lines is in breach of Road Safety Rule regulation 234 (a) – which says you can’t cross a road less than 20 metres from a crossing.

But in many cases, people have little choice but to cross outside the lines.

Short “green man” phases at some intersections mean that you might miss the lights if you crossed between the lines.

At King Street (corner Bourke Street), shown below at lunchtime, there’s only 12 seconds to start crossing, and only 30 seconds in total to cross – because roads authorities have prioritised north-south car traffic. (Hopefully King Street is one of the ones to be reviewed and modified.)

The default crossing width seems to match the footpaths that feed into it.

But this doesn’t make sense, as waits for traffic lights mean people cross in large concentrated groups – quite a different pattern from moving individually along a footpath.

This is not just a CBD problem. Suburban crossings are often too narrow – either not providing required capacity, or not taking into account desire lines, such as the flows here at Bentleigh station to and from the westbound bus stop. 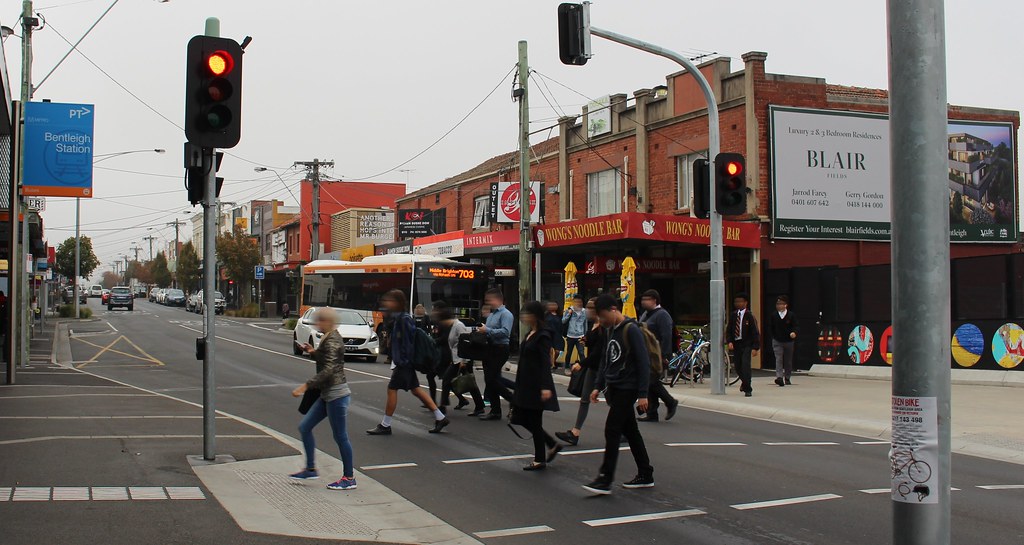 To give authorities some credit, a few re-designed crossings provide a lot more space to pedestrians – at least in the CBD.

In some cases these have been implemented alongside upgraded tram stops, for instance, where the ramps plus the platform plus widened crossings can nicely fill the half-block. 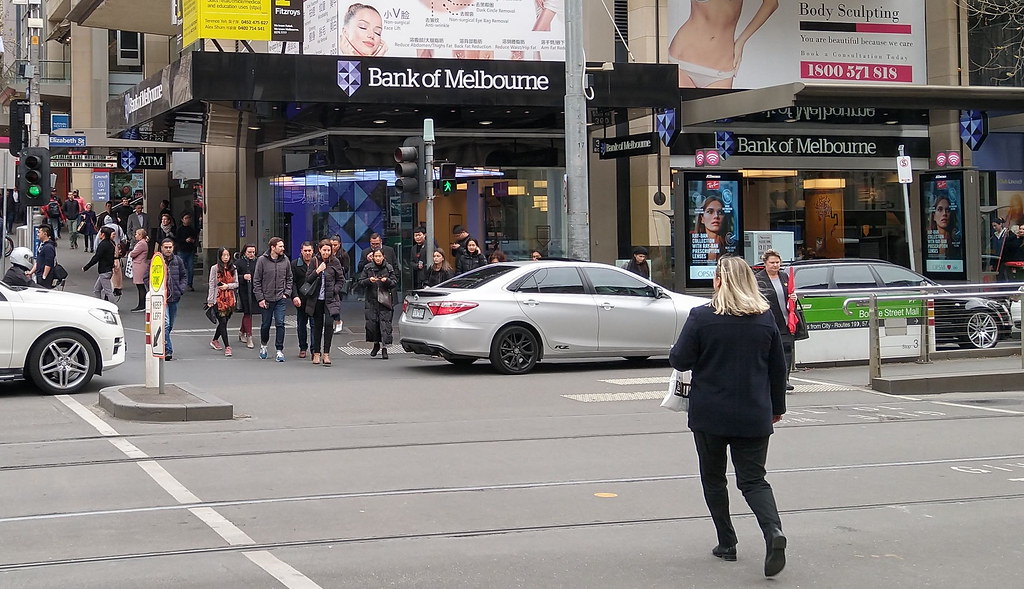 Of course it doesn’t matter how wide the crossings are if motorists keep blocking them – an ongoing problem given there is no enforcement of the rules.

7 replies on “Why are pedestrian crossings so narrow?”

And even when the pedestrian crossings are widened, often the kerb cuts are forgotten – I’ve lost track of the number of times I’m pushing a pram and discover the crossing leads into a hard edge.

Japanese pedestrian crossings are much wider. For example, there is a pedestrian crossing outside Tokyo Station that would be as wide as the road (I’ll send you a photo of it). Is this a curse of the English-speaking world that we take our standards from the US, where we can access their engineering standards for free on the internet without translation, because our engineers don’t have the language skills to access standards from anywhere else?

I encounter an example of what Marcus is talking about every time I leave Southern Cross station at the Collins Street exit. The cut in the kerb in Spencer Street is about a metre shorter than the marked pedestrian crossing. In the same vein, the kerb cuts for pedestrians on the south-east corner of Collins & Elizabeth street are narrower than the width of the marked crossings. There are plenty of other examples of that.

This is a major issue for cyclists – pedestrians cross the road out in the bike lane, meaning cyclists need to drift into the ‘car lanes’ in order to safely pass. Not that pedestrians are perfect in keeping clear of bike lanes in other parts of the road.

A solution would be more scramble intersections – I’m thinking La Trobe and Elizabeth and Bourke and Elizabeth. Another would be to turn areas into shared roads with a maximum speed limit of 20, for example somewhere on Collins St.

There are particularly silly examples such as the east side of Little Bourke x Swanston. Pedestrian crossing that is narrower than the footpath, partial width dropped kerb, and offset back up the side street so people waiting block the footpath.

Any talk of prioritising pedestrians in the city is a straight out lie, the existing timings are below minimum standards and recent “upgrades” went backwards with even less time for pedestrians:
https://meltdblog.wordpress.com/2019/05/01/pedestrian-downgrade-at-flinders-st-station/

The same is so with pedestrian crossings with rail lines. At my home Narre Warren, the walkway is just wide enough for one person. When you have a train arrive, there is quite a huddle around the crossing. Further to that, you need to keep your mind in what the other pedestrians are doing, and not focus on what train may be approaching. People often need to stand to one side right on the railway tracks, to let the other person get past. Very dangerous. This crossing was last modified in the mid 1990s.

An opportunity was lost when Swanston walk opened, when they needed a much wider walkway along the street.

[…] Pedestrian crossings at major intersections have been widened. […]