One final blog before Christmas.

PTV published this data some time ago, covering Melbourne’s train/tram/bus patronage from 1947 to 2011, but I’ve added the most recent figures using numbers from the Budget Papers.

The data starts just after WW2, with the highest number of trips shown being 587 million in 1948-49.

There was a big dip for trams in 1949-1950, and another for trains in 1951 due to extended industrial action. The PTV report also notes that post-war petrol rationing finally ended in 1950.

It’s notable that the early figures show more tram trips than train, perhaps reflecting that until that point, Melbourne’s suburbs were mostly still within reach of the tram system.

Trams also play a continuing role for inner-suburban destinations, including for trips partly served by train. There were still more tram trips than train most years until early this century, when train patronage started to accelerate fast.

Across all modes from the 1950s, there was a sustained downward trend until the 1980s. The public transport network wasn’t expanding – in fact it was contracting, with most Footscray-area tram routes closing, and other services being reduced. Cars were getting cheaper, and governments were spending up big on roads, encouraging more and more people to drive instead.

The low point is 1980, with just 90 million train journeys, and 262 million trips on the network overall. From there, with the opening of the City Loop in 1981, and the introduction of multi-modal tickets also in 1981, things begin to pick up a bit.

There wasn’t much change through the 1990s – but by the end of the decade, moderate increases are seen. I’d tend to attribute this to recovery from the 1990s recession, and big increases in Sunday tram and train services in 1999 (suddenly it became practical to use public transport on any day of the week), and the continued roll-out of new (air-conditioned) trains and trams. 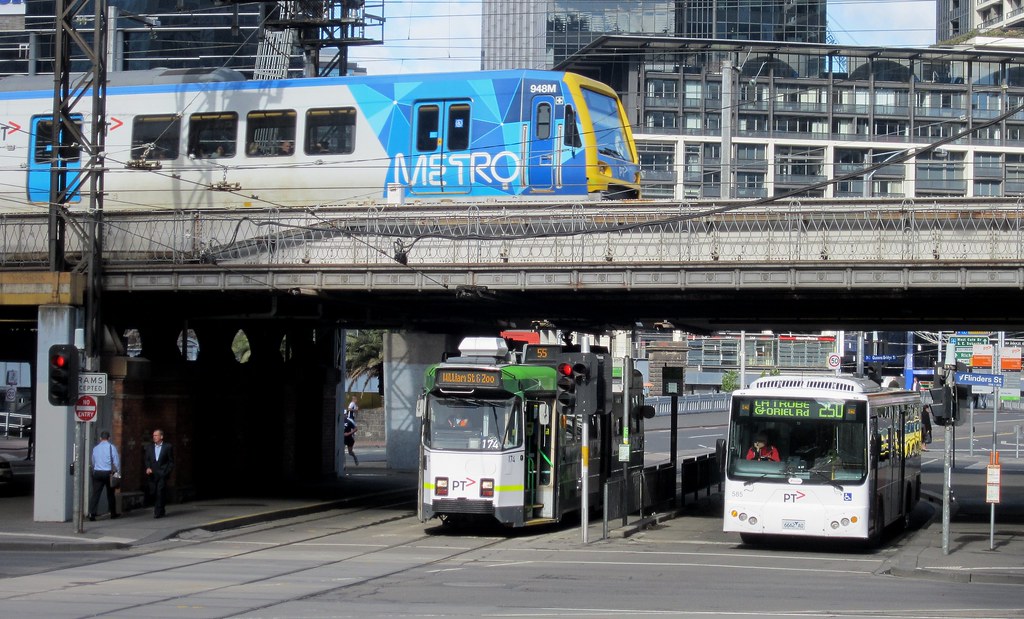 It’s in the mid-2000s that Melbourne’s population starts to take off, alongside CBD growth, and for trams and trains (not so much buses) we’ve got into a “virtuous circle”: extra patronage leads to crowding. Crowding prompts action and investment, which results in service upgrades, which ultimately makes the system more attractive, leading to extra patronage. Rinse and repeat.

Even relatively small things like running 6-car trains right through the week (instead of 3-cars in evenings and on weekends) helped remove a barrier to patronage growth. Better information including apps, and signage is a help as well.

Helping all this along, I think, was an increasing awareness of the importance of public transport in a big city. It’s also worth noting that in the mid-2000s, the headquarters of the two leading television networks (7 and 9) moved into the CBD, and the trend in recent years has been for more journalists to use the public transport network themselves, helping to bring issues such as crowding into focus.

Where the virtuous circle has been less apparent is on the bus network. The big upgrades in recent years were the introduction of the Smartbus routes, in stages mostly between 2005 and 2010, and university shuttles (especially the Melbourne Uni 401 in 2007, the Monash Uni 601 in 2011), with some local network upgrades in areas like Wyndham, Brimbank and Mernda.

All these have resulted in more patronage. The problem is that regular crowding has not prompted a very strong government response.

In 2008, train patronage surpassed the 1950 peak. The overall network total hasn’t yet beaten that peak, nor have tram or bus patronage figures, though they are on the way.

The numbers don’t show it, but I would expect some key differences between 1950 and now are:

Overall, public transport usage is increasing. And while there might be growing pains as investment catches up, ultimately, it’s got to be good news.

I would attribute the late 1990s growth in trains to (i) service increases – it’s often forgotten that there were many interpeak train frequency upgrades during the Kennett era – eg the Frankston and Dandenong lines gaining 15 min interpeak frequencies (up from 20 min) and (ii) less industrial disputation so more reliability compared to the late 1980s/early 1990s.

As for 1980 being the low point, this is true in absolute patronage, but in terms of patronage per capita the early 1990s were if anything lower. This being due to (i) industrial disputation, (ii) massive cuts to bus services (some of which had not been restored 25 years later eg Route 800), and (iii) cuts to peak train services, notably expresses, around this era.

In relation to recent bus upgrades, it is impossible to discuss this without paying tribute to the MOTC span upgrades on over 100 local routes. As important to basic mobility as the high-profile SmartBus and uni shuttles. These restored most of the early 1990s cuts but went a lot further, particularly on weekend. However they did not restore weekday peak frequencies. Neither were very many recommendations of the outsourced network reviews implemented pre 2010 – those after that time were fewer in number but had more success.

As you say, regular crowding doesn’t seem to have prompted a response, especially on the trams. Of course, there’s crowding in the CBD because of the free fare zone, but there are issues elsewhere, too. The frequencies in the 70s were on the whole better than they are today. Of course, the newer trams today have greater capacity, but I’m not sure that fully addresses the issue – for one thing, not every route has large capacity trams Also, a more frequent service is not only more convenient to use, but it provides resilience if there’s a cancellation.
Just as a random example, I looked at the route 64 timetable for 1977. Between 7 and 8 am, there were 9 trams from East Brighton heading to the city, 2 school services to Chapel St and 3 heading to William St (via Balaclava Rd) – total 14. The current weekday timetable has 6 departures for the city from East Brighton, plus 1 from Glenhuntly Rd – .on one view, a 50% reduction. And from the graph, there were fewer people using the trams then than there are today.
I guess the days of 3 or 4 trams banked up at every intersection in Swanston St aren’t going to return, but the memory of just fronting up at the tram stop in the suburbs and being annoyed if a tram wasn’t in sight does provoke some nostalgia!

Trams are susceptible to overcrowding when there are too many people who want to get on. Well that’s obvious. One reason is longer than expected gaps between trams. This is partly the trams’s fault but a lot due to traffic which is probably worse than the 1950’s in most places, most of the time. The other reason, is unexpected bursts of passengers when people leave work en masse or school classes end or a connecting train arrives or a football game ends. Some of these can be anticipated, some can’t. I suspect that some of these were better anticipated in the old days, than now.
I laughed when you said thing started to look up when the loop opened. I hate the loop.

Great article and reminds us how vital an ever improving public transport system is and will be in years to comes Extending a train link down to the Mornington peninsular and more smart busses in our ever growing south would be great. As stated the better public transport , the more will be attracted to use it and we won’t need Car inducing Freeways like the proposed Mordialloc Freeway. In the 21st Cenutry, like many of the best countries time to invest more in such transport for a more sustainable future to get more cars if roads.

The graphs above illustrate the stag in growth caused by overcrowding and lack of investment in trams and buses.

The Andrews Government loves putting spades in the ground. Thus far it has not been very interested in improving the quality of service or buying new trams.

V/Line growth is much greater

[…] In the 1970s the City Loop was conceived as the saviour to turn the tide in patronage – but all it did was arrest the fall. […]

[…] fact in the data going back to 1947, the only higher jump I could find was following the patronage dip from the 1990 tram strike that […]