As expected, public transport fares in Victoria go up from 1st January. This time it’s a CPI rise of 2.2% – thankfully not as high as the last four which were CPI+2.5% (budgeted by the Coalition in 2014, delivered by Labor).

It’s worth noting that for short trips in zone 1, this is now precisely double the $2.20 Sydney tram or bus Opal fare for up to 3 kilometres.

The fare rules are a bit different – Sydney’s free transfers are generally limited to the same mode within 60 minutes, and the daily cap is much higher (except on Sundays).

It turns out that the fares in Sydney in most cases are lower than Melbourne’s standard $4.40.

Melbourne’s fares (within zones 1 and 2) are generally cheaper for longer trips: over 8km on buses (Sydney trams don’t even go that far!) or over 20km on trains in peak, or over 35km off-peak.

And the transfer rules and daily cap mean Melbourne is cheaper for roaming around all day (for instance, tourists) – but this is not what most daily commuters do.

It’s those short trips that really sting, thanks to the nearly flat fare structure. You wonder how many people choose the car by default for short inner-city trips because of it, especially when travelling in a group.

Also spare a thought for V/Line passengers. Anomalies in the zone system mean that, for instance, a passenger from Lara to Melbourne pays $4.40, but hopping on the train a few minutes earlier at Geelong will cost a whopping $13.40 in peak, $9.38 off-peak.

How much have fares gone up over time? 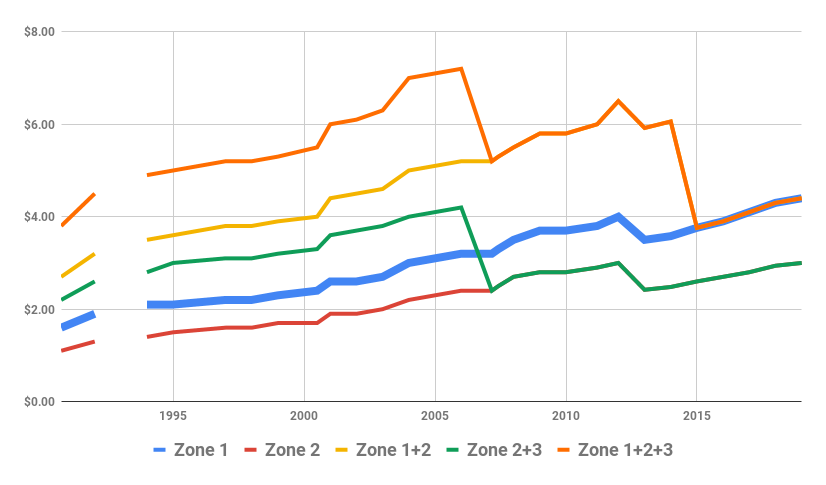 See the data. I am currently missing the prices for 1993. Can anybody help?

There was a slight drop for all fares in 2013 (actually in the last days of 2012) when single use Metcards were phased out, forcing everyone onto the bulk price Myki fares.

Solutions are hard because so often the politicians reject any policy change where anybody is disadvantaged.

The flat fare has pros and cons. The only logical alternatives are more zones, or point-to-point pricing. The latter is difficult given the older Myki readers still common around the system on trams and buses are so unreliable, and Myki zone detection is so hopeless.

It appears for instance that buses have two GPS systems. One is able to, usually, tell the real-time apps how far away the bus is to a minute’s accuracy; the other is often unable to figure out which of two gigantic zones it’s in.

Introducing off-peak fares is another option. V/Line gives a 30% discount for off-peak. Perhaps this should be looked at for metropolitan trips too. The same discount would bring that $4.40 fare down to $3.08, matching Sydney on more trips. This would help improve demand at off-peak times, and would shift some trips out of peak.

There is a kind of off-peak pricing: between 6pm and 3am you’ll only pay one 2-hour fare – this was inherited from Metcard, and inherited from the 1980s era paper tickets before that! There is also the weekend/public holiday $6.30 cap.

And another upgrade that would be of benefit: re-instating the weekly and monthly caps once planned for Myki would help stop Myki Money users paying too much, and remove the confusion of having to choose between Money and Pass to get the best deal.

@Rod, oops, thanks, corrected. Shows how often I use Myki Money.

When in Sydney, I commute from outer suburbs so it is always more expensive than Melbourne. One good thing about Sydney, is that I won’t need an Opal card anymore, just my credit card

>It appears for instance that buses have two GPS systems. One is able to, usually, tell the real-time apps how far away the bus is to a minute’s accuracy; the other is often unable to figure out which of two gigantic zones it’s in.

I hope they improve this. Personally, I’m OK for a total price increase in the future provided they split up the zones 1-2 into smaller concentric zones like in Brisbane or Sydney and the Zone 1+2 becoming the top price cap for 2 hours and daily fares. Even better if it’s distance-based with a minimum cap like in Singapore.

They should reintroduce zones and add off peak fares as in Sydney.

“politicians reject any policy change where anybody is disadvantaged.”

Can I call them corrupt?

Gladys is giving handouts to people who can afford to use toll roads:

We either want people to use public transport or we do not. Make off-peak public transport free and fund it via commercial land tax. Remember, electric cars will make driving even cheaper than it is today! Especially if the house makes its own electricity via solar panels.

However, Sydney does not have any periodical passes. No 7 day, no quarterly, no yearly passes.
So for the regular commuter travelling every day – Sydney ends up a lot more expensive for medium distance trips or trips involving a change of mode over a year, compared to a yearly Myki Pass, particularly the discounted one.

However the biggest difference is for longer distance interurban train travel. One way peak train trips in Sydney are capped at $8.69 for distances over 65km. This includes Central to Maitland, which is slightly further than Southern Cross to Bendigo.

So – for a commuter travelling 5 days a week to and from work from Zone 2 to the CBD, who purchases a yearly Myki Pass – ends up paying a *lot* less than a Sydney commuter travelling over 20km by train to work. Particularly if they have a bus trip at either end.

It’s only for very short trips that Sydney is cheaper.

I keep Myki Money on my card for when I forget to renew the pass. When I was living out in the country I was spending about $16 a day for trips to and from Melbourne.

A possible “solution” would be to introduce a “single trip short distance” fare, maybe $3, overlaid on the present fare structure. It would cover perhaps up to 3 kms on a tram or bus and up to 3 or 4 stations on the trains. BUT in spite of the fact that no-one would be disadvantaged (political imperative!), it seems impractical at present, mainly because Myki readers aren’t accurate enough (and anyway, could the Myki system handle the added complexity?). It would also reduce fare revenue, and introduce a need for passengers who wanted to take advantage of it to touch off in the city (although maybe Myki readers could be placed on tram stops?). So I just “dream on”……..

Off-peak V/Line fares – only if you’re travelling across three or more zones in a continuous journey!

Maybe one day everyone should disembark a train from Geelong or Ballarat at Sunshine, and catch a Metro! But you need to touch off and back on – imagine the chaos! And another little trick – if you did this and can get away without touching off at your final destination (i.e. you don’t need to go through closed barriers), you’ll only pay $1.36 for the Zone 1 part – because Myki will charge you a default Zone 1/2 fare, but will subtract off the Zone 2 ($2.94) bit because you’ve already travelled in Zone 2. I do that every night on my trip home from Geelong when changing at Sunshine for West Footscray – meaning I pay $4.86 for a trip from Geelong to Zone 1, rather than $9.24 off-peak. Just completing that trip now!

And on the way in the morning, if V/Line conductors aren’t doing their job changing the default fare on the Myki I don’t touch off at Geelong, meaning I only pay a default Zone 1/2 fare – which is nothing since I’ve already travelled in Zone 1 from West Footscray to Sunshine (talking about short trips – bring back the two-station ticket!)

I don’t think there is anything unlawful about not touching off a Myki – perhaps I’m engaging in fare avoidance rather than fare evasion!

I can balance that with paying to travel in Zone 1 three times in a day, as I’ve described in previous comments, due to the daily caps and interrelationship with regional Myki fares.

A you pointed out, Daniel, the differential between Lara & Melbourne and Geelong & Melbourne is steep – surely no-one in their right mind would catch a train at Corio!

I definitely think its not fair that I have to pay the same to travel 3k and 10mins down stkilda rd into the city then someone who is travelling 30k+ and a hour.

In my view, the best system would be a point to point pricing based on linear distance (and not track distance). This could operate as a integrated myki fare system for Metro and V-Line commuters.

By implementing daily, weekly, monthly and annual fare caps, while complicated at the back-end, would result in a user friendly system.

The advantages of this system is that it reduces the cost of short trips, while ensuring that commuters contribute proportionally to the costs of providing the service (endless urban sprawl has real costs).

The disadvantages would be the required costs of software upgrades and hardware upgrades (e.g. fare adjustments machines for all stations). There would also be potentially integrating this fare structure with buses and trams.

The main disadvantages is that it would be unpopular among certain constituencies, meaning politicians will run 100 miles rather take the risk on implementing meaningful reform.

There was also the Off-Peak Saver (an all zones off-peak daily ticket, not a saver for short trips), Melbourne`s only recent history off-peak discount, that disappeared with the end of Metcard.

The increases in fares since 1991 are even higher for former Short Trip and Rail Plus 2 eligible trips.

Distance based fares would penalise cross-city trips out of proportion to their cost to the system because there is usually plenty of counter-peak capacity (with the exception of the inner section of the Belgrave/Lilydale line).

For most distances (that include zone 1) Melbourne is $4.40 per trip, or $44.00 per week on Myki Money or preloaded Pass. If using Pass, you get any weekend trips included.

And yes, if Melbourne users are prepared to prepay for longer, the price goes down. No such option in Sydney… which is likely to be more expensive over time for 10+km train trips in peak, assuming you work most of the year.

So yes, it’s not clear cut for regular commuters, if they use Passes. But the high cost of individual trips still discourages occasional users.

The best solution i can think of is to set $4.40 as the max fare, but then add extra inner zones that step down from that level.

Then just increase the outer zones at a higher rate each year.

Clearly the only disadvantage of the fare system in Sydney is that they don’t have discounting for regular users. Maybe the fact that they have cheaper short distance and off peak fares, better train and bus services is something Melbourne could take a lesson from.

Sydney’s latest fare system is a vast improvement on the old one, if you change to a bus for less than 3 km after travelling on the train, the incremental cost is only 15c.

Melbourne’s 2-hour system is somewhat ridiculous. I regularly take a service in Melbourne which, depending on waiting time for the first train, and then the second train, and also the stupid loop, takes between about 100 and 130 minutes. So sometimes it is twice as expensive, on the days with the slowest service !

[…] Have fare cuts like the FTZ and the nearly flat fares added to upwards pressure on fares generally? Yes. Around the same time the Coalition introduced those changes, they also flagged CPI+2.5% rises from 2015 to 2018, which were subsequently implemented by Labor. A short trip in Melbourne’s Zone 1 now costs about double that of Sydney. […]