It’s been very busy the last week or two, which is why the blog has been a bit quiet.

Apart from the day job, this week I’ve been to two MTF transport forums (Melbourne, and Glen Eira), and a PTUA committee meeting.

There are more MTF forums (fora?) in the coming weeks, and if you’re interested in this topic, they’re well worth attending. Details here.

At the Glen Eira session on Wednesday, one of the panel members remarked that Caulfield station needs an upgrade, because it’s the tenth most crowded station.

I agree on both counts! But as usual it can be useful to trace back the source of the information.

How did they know Caulfield is the tenth most crowded?

Because it was in this ABC story: Where did the ABC get it? They asked the PTUA.

How did the PTUA calculate it?

There are different types of crowding: on the trains, and in and around the stations.

Some stations are particularly bad for train crowding. Even when the service is running well, it can be difficult to squeeze aboard at the height of peak hour. Typically these stations are the last “minor” stops before the inner-city, where the trains are at their most crowded. Hawksburn and South Kensington are examples of this.

At other stations, it’s a struggle getting in and out because of constrained and crowded platforms, stairs, ramps, subways, entrances and exits. Flinders Street is an example, where during morning peak (when full trains arrive and disgorge passengers) the infrastructure struggles to cope with the sheer number of people exiting and interchanging.

At some stations they suffer from both of these problems. South Yarra, Richmond and others. 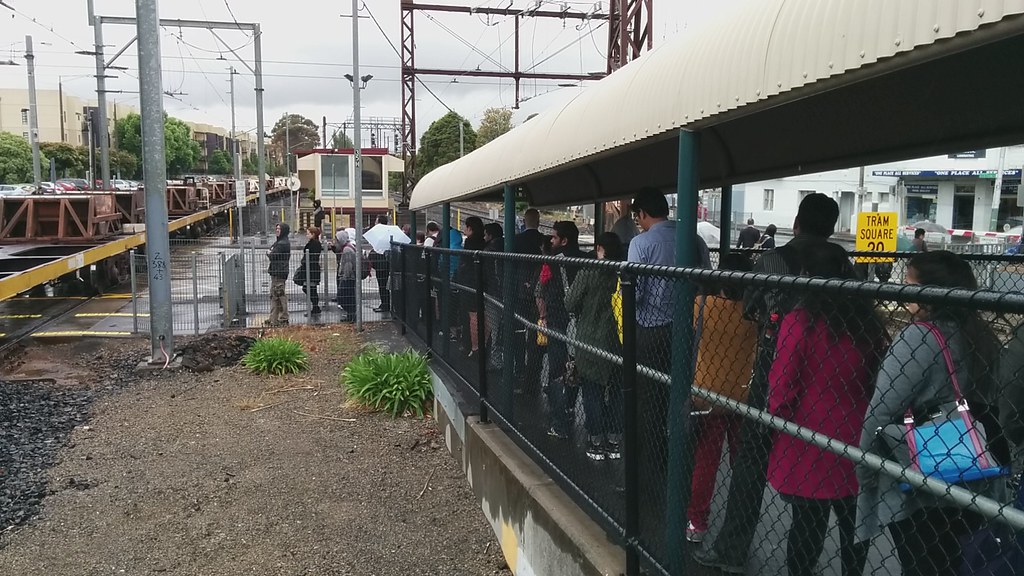 There’s relief on the way for some of these issues.

Getting back to that list. Can these factors be measured?

So when asked “which stations are the most crowded”, I looked at a bunch of factors, including observations and opinions from fellow passengers, but it wasn’t a scientific or mathematical measure.

It’s anecdata! And apart from South Yarra being nominated as the “worst”, the stations weren’t strictly ranked. But people love a list, even if it’s not actually meant to be in a particular order.

With growing patronage and a future role as a metro tunnel interchange, does it need an upgrade? You bet!

13 replies on “Most crowded stations”

Very informative (and rather amusing).
You’d think that PTV would have some quantitative metrics for determining over-crowding at stations. For example, using number of patrons in peak, number of exits and width of exits spring to mind.
Most people would say that the station they use are crowded.
Melbourne Central platforms are better for waiting passengers than Parliament/Flagstaff due to design. Could space be created on Parliament/Flagstaff platforms by removing the walls between them?

Melbourne needs a comprehensive root and branch station refresh program, much like the LXRA. Start with the most urgent, and work back over a decade to upgrade them all to a standard.

There are a lot of things that need doing to fix transport, but doing the big things (Metro Tunnel, Metro 2, giving billions to Transurban) shouldn’t preclude the smaller ones.

The ABC would benefit more from asking PTV or the people who run Myki.I would imagine the data to be fairly close to the mark based on the information that they gather through fare collecting.

Is there any further information on the Glen Eira meeting – a write up, report or video? Living nearby I’m very interested in plans for the Neerim & Glenhuntly Rds crossings.

Both South Yarra and Caulfield need an additional concourse (like North Melbourne got when they upgraded it, but without loosing the existing entrance). Not only is Caulfield a future Metro transfer station, it is in the centre of a growing high density residential precinct (both the car parking between the racecourse and many of the nearby parts of Dandenong Rd, East Malvern are being redeveloped at medium to high residential densities).

Glenhuntly needs grade separation as the permanent solution to the afternoon peak and shoulder-peak station exit crowding. The only other way to reduce it would be to use platform 3 for the stopping services, allowing most of the patronage to/from the eastern side of the line to avoid the level crossing, however this has other mostly negative effects.

@Arfman, the patronage data will tell you how many pass through each station, but won’t tell you how crowded those stations are, as this depends on the capacity of each of them, including how “peaky” the numbers are.

@Holly, the videos from the various forums are on Facebook: https://www.facebook.com/pg/2018transportforums/videos/

Proper timetabling (consistent spacing and higher frequencies) could go a long way towards preventing over-crowding on platforms. If there’s a game at the MCG on a Friday night finishing around 1020pm, trains (excluding specials, which are not something you want to rely on) depart Richmond outbound:
1010pm Glen Waverley
1015pm Pakenham (1005pm/1025pm when new timetable starts)
1016pm Belgrave and Sandringham
1018pm Frankston

That’s five services in 8 minutes, then there’s nothing outbound at all for 18 minutes until 1036pm.

At Caulfield you could mitigate the problem easily with a footbridge between the platforms towards the southern end of the station. There is a lot of people there changing trains. That would make more room for people in wheelchairs on the existing ramps.

Another reason for crowds of people milling around at some Melbourne stations, is the ridiculous lack of information about where trains are going.
Latest stupid examples. Arrive at Southern Cross on the red bus, big indicator board says “take next train to Flinders street, platform 11”. So I take next almost empty train to Flinders street. Sign in train does not say where it is going. No sign visible outside train. Start to get off but bowled over by rush of people getting on. They obviously know where they think it is going. Why is it so hard for he dumbos in charge at PTV to understand that there must be some people who want to go from one side of Melbourne to the other, that not all trips are a trip to the CBD.
Second example: Take train from Frankston line. Usually this train goes into the isolated platform under the bridge. On this occasion it goes into the normal platforms. I get off the train to look for the Craigieburn Line. I eventually realise it is the train which I just got off. Almost missed getting back on.
Platform numbers are not very visible at Flinders Street, particularly if you arrive there on a train.

Given that Caulfield has pre-DDA non-DDA compliant ramps, any new footbridge or concourse would have to have lifts or ramps for DDA compliance (especially important as there are currently no DDA-compliant stations between Glenhuntly/Carnegie (Clayton until the lifts at Carnegie open) and the City Loop, severely extending 2 line trips for passengers needing DDA-compliant stations).

The eastern end of the station (which is also slightly south of the western end) is, given the space constraints at the western end, indeed a reasonable location for enhanced inter-platform access, especially with the works siding at the end of platform 4 gone, despite it being further from the tram line and much of the new residential development.

Building a footbridge without its own access to outside the station would increase pressure on the already crowded entrances/exits on platform 4 and probably platform 1 as well (although platform 1 would likely only have significant issues when there are races at Caulfield). New entrances would thus be required although the platform 1 entrance may only open on race days.

That’s a fair point, but wouldn’t PTV also building capacity information for the stations and can collate this with how many tap on and tap off they have at any time?

I guess it’s a matter on how public they make that information.

I agree that South Yarra should have a second concourse at least, or ideally three. The first one should be located on the other side of Toorak Road, and this should be carried out in conjunction with the Metro tunnel. Another one can be located on the northern end to connect with Yarra Street and Yarra Lane on the east side to provide a shortcut to the apartments on the other side, as well as Melbourne High.

I feel that Sydney Trains’ stations aren’t much better. Redfern really needs a second concourse on the other end for the same reasons as South Yarra, and Devonshire Street side of Central Station could also could do with a second entry closer to Railway Square on the western side (in addition to the existing ticket gates on the eastern side). At the risk of sounding like I’m whinging, if this was Tokyo, we’ll be having, say, a minimum of three concourses with 2-3 exits each, and at least two sets of elevators going between the concourses, the platforms, and the streets. If this requires more staff to look after the multiple gate points, so be it.

Connecting anything south of Toorak Rd to the platforms at South Yarra is mostly extremely difficult because of the existing ramps and the existing Toorak Rd bridge. Platform one is relatively easy, go around the outside (only relatively though, there are still buildings that way, including the old post office on the corner of Osbourne St). Platform 6 likely requires Yarra St to be made one way (not a bad idea) to make space for going around the outside of the station. Platforms 2 & 3 are a bit difficult to get access around the ramp. Platforms 4&5 are an absolute nightmare to access because of the different curvatures of the different track pairs curving towards Hawksburn meaning there is no way to access to access a new concourse without going under the rails. It is also of little use to people changing between South Yarra`s existing platforms.

In contrast, a northern concourse would be relatively easy to construct. Yarra St may still need to be made one way from Toorak Rd to past the entrance to the new concourse and a small amount of property acquisition (one or two properties or parts thereof) to provide access to Darling St but that is simple in comparison with the previously described option.

Part of the crowding problem in South Yarra and Caulfield station is due to the single entrance or subway between platforms. Crowding in these areas could be reduced if passengers who are interchanging can travel between platforms without having to (effectively) exit and re-enter the stations. It’s relatively easy to interchange at Flinders Street and Richmond stations since there’s three exits between platforms.