Walking at night? Be one of the good guys

Lots of people usually alight at my station, even late at night. But as we all exit and walk off in different directions, the streets, especially at night, can get pretty quiet very fast.

The awful murder of Eurydice Dixon has got us as a society once again talking about personal safety issues.

While it’s true the risks are actually greater at home among people we know, there are obviously some dangers out in the world.

One article that caught my eye was this piece in The Age, about walking home in the dark.

I get off the train in the darkness, and see a woman. She is smaller than me. Most are. She strides with purpose – upright, head on a swivel – seemingly alone, with only her “situational awareness” for company.

She would have seen me, too. I’m the big stranger behind her, leaning into the wind, dressed all in black – boots, hat, coat, with a beard.

She moves quickly, but in the same direction I’m headed. In the hurry to get home and see my wife and little boy, I could breeze by her, quickly closing the gap between us until my long strides overtake her short ones. I could fall into lockstep with her brisk pace, following from a short distance away. I could bolt past, if I wanted.

But I don’t. I haven’t done any of those things in a long time. These days I stand and wait a few moments, to create a comfortable buffer. Or I choose an alternate path home. Or I call someone on the phone, hoping my voice engaged in light conversation might dispel any sense of troublesome disquiet that my silence might otherwise stir.

Of course, most people are willing to help if something bad is happening. (The article has specific advice on this; please read it if you feel the need to comment on this specific point.)

But this is an important reminder that also there are things us blokes can do to ensure our presence is not intimidating to others.

I recall many years ago, when I was about twenty, reading a letter in a newspaper on this topic. The female author was thanking an unknown man — she had been waiting at a dark lonely railway station late at night, and he arrived to catch the same train. She noted that where and how he entered the platform to wait nearby, and his body language, appeared to be deliberately non-threatening.

When walking at night or in an unfamiliar neighbourhood, your own personal safety means it’s often better to convey a sense of purpose, and that you know where you are going.

But beyond that, there are things you can do to avoid being unnecessarily intimidating to others around you.

Not just women — anybody who might consider themselves vulnerable to others. Kids on their way to school. Anybody walking alone when you’re in a group. Anybody smaller than you.

Everybody’s got a right to be out there on the street. It’s not Might Equals Right. 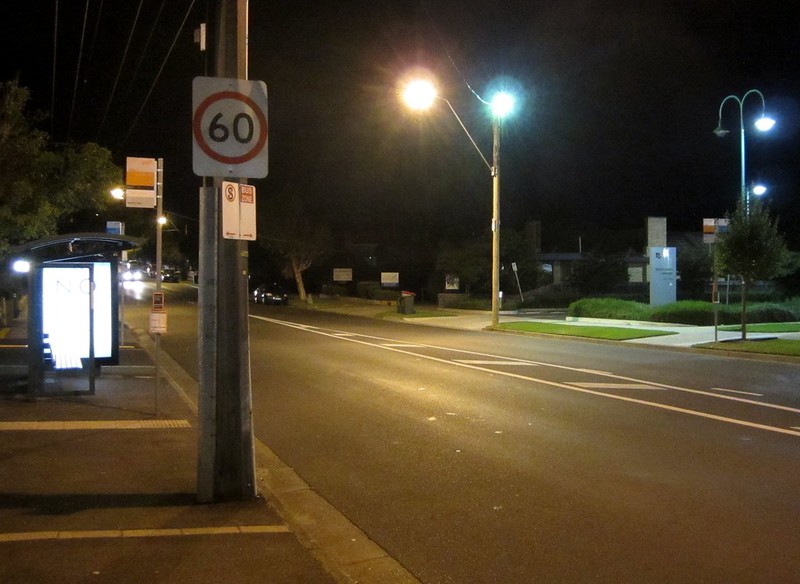 So what can you do?

Don’t walk directly behind someone. Back off, or overtake quickly — perhaps at a spot where the footpath is wider so you don’t get too close; or cross the street.

Don’t walk in silence. If I’m with others, I talk to them. (Around the streets of Bentleigh in the evenings, you’ll often find my sons and I walking, talking about their favourite topic: movies and TV!)

It seems to me that even little gestures of body language might help put the other person at ease. If walking in the opposite direction, by all means acknowledge, but don’t stare. Even bow your head slightly to stare instead at the pavement is likely to give off the signal that you’re not a threat.

I’ve never even thought to ask anybody if this makes sense to others, but apparently it’s seen as a positive:

I can tell you that women notice and appreciate these gestures, also alerts us to potential helpers

Some of the reactions to the Age article have been interesting. One (female) letter-writer suggested men should call out offering help, even if everything seems fine. I’m inclined to think that’s just going to be perceived as creepy.

Some responses have just been grumpy, and selfish: What should men do? Are you kidding me? Nothing is the answer. Why? You are in charge of your own safety, not men.

Why? Because we live together in a society, that’s why.

It’s not Every Man For Himself. We can work together to help each other; to make our spaces safer and more enjoyable.

One of the joys of living in a city is random helpful interactions with strangers.

Open a door for someone; give a lost person directions; pick up and pass back something someone has dropped or left behind; volunteer some water for someone who needs it; even just standing on the left of the escalator.

I just watched Hannah Gadsby’s “Nanette“, just released on Netflix. It’s excellent, compelling viewing. I won’t give away the ending, but there’s a marked change of tone towards the end, and one thing she discusses is people’s humanity.

Having consideration for others, helping (and being helped by) strangers — it’s not just the right thing to do. If you don’t have these random happy moments in your life, you’re missing out.

Be one of the good guys.

9 thoughts on “Walking at night? Be one of the good guys”