But as I noted in this blog post, one bane of pedestrians is bushes and trees overhanging footpaths.

They’re not really obvious unless you’re walking, but bushes and trees like this are everywhere.

I’m sick of having to duck out of their way. This is especially difficult when it’s dark. You can easily not spot the hazard as you approach. 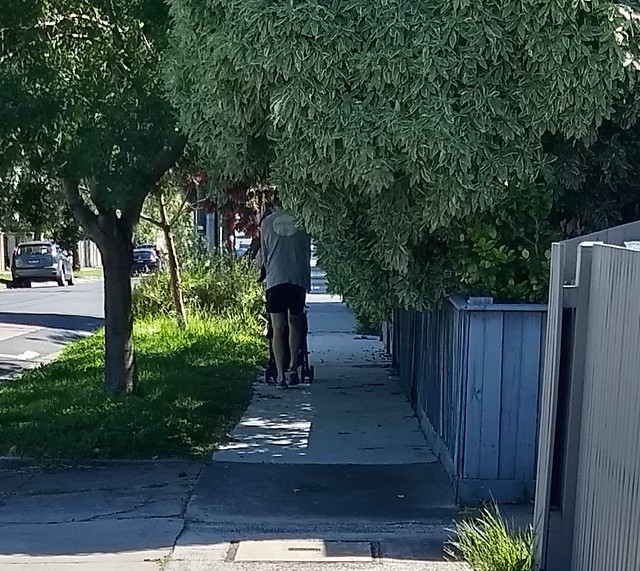 Local councils have regulations about this. In my area, City of Glen Eira local law says:

Trees must be trimmed to a height of three metres above the ground and, at least, vertically in line with the property boundary. Shrubs must not protrude beyond the fence line or encroach onto the footpath.

If a Council notice is sent requesting that trees or shrubs be trimmed, the work must be completed within 14 days.

Property owners who do not comply with a notice within 14 days will be issued with an official warning notice. This provides a further 10 days to complete the work. If action is still not taken within the required timeframe, a penalty notice of $200 may be issued and a contractor will be engaged by us to undertake the necessary work. The property owner is responsible for the contractor’s fees.

When I checked with the council, they said they don’t do proactive inspections. It’s up to people to report problems.

But how many people know what the rules are, and that you can report them? No wonder it’s such a widespread problem. 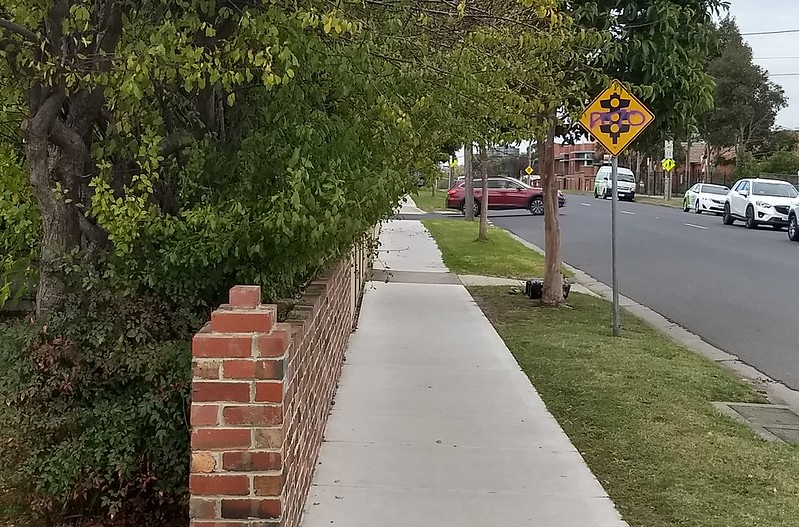 What the council does do is when looking at a reported site, they will look at the immediate surrounding area.

They also said that for overhanging branches from trees on the nature strip, the council is ultimately responsible — though it sounds like they’d prefer if property owners kept them under control.

One weekend I went for a walk along some main roads near home, and noted down some particularly problematic locations to report.

I used a stricter criteria than the council. The council standard is 3 metres of clearance. I decided I’d only report it where I had to duck to walk under it (I’m about 1.8 metres tall), or if it was blocking enough of the footpath that a parent with a large pram, or someone with a mobility aid/wheelchair would have to detour onto the grass to avoid it.

On a 6km walk, I found about two dozen problematic locations. About 90% of them were bushes and trees growing from private property. A small number were on the nature strip. And I reported a bunch of them.

On a subsequent walk, I found one far worse: 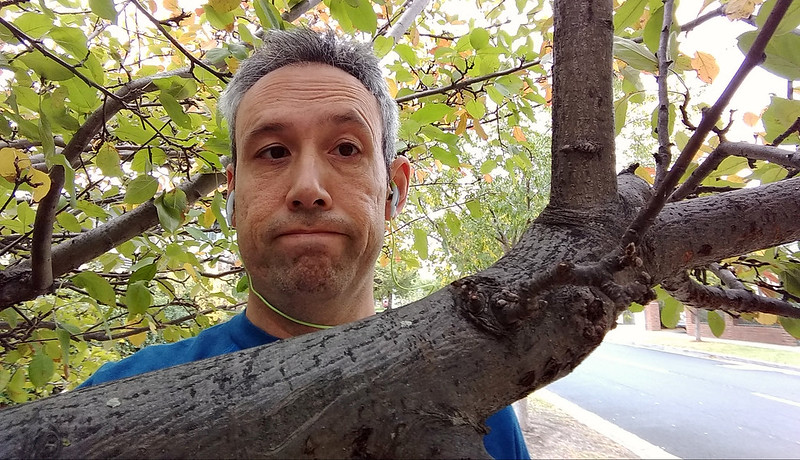 With most trees and bushes that overhang the footpath, you can brush past. Not this one.

The main branches are so thick that you’d do yourself an injury if you collided with it. It’s right at head height.

Someone had put a bit of hazard tape on it, but one wonders how it was ever allowed it to block the footpath like this.

We’ll see what happens next.

Update 15/5/2018: Sometime in the last 72 hours, the tree in question has been pruned back markedly, such that it is now clear of the footpath.

Interesting report. I hate to think how many sight-impaired pedestrians are decapitated.
I’m in Bayside council area and I notice that often shrubs jut out on the bayside bike path and take weeks to be trimmed. So the council is at fault in these cases – arguably more dangerous than trees impinging on a footpath

I do wonder about the three metre standard though – if it were applied consistently to all overhanging vegetation and not just that on private property, it would effectively outlaw all street trees.

Seems to me a clearance standard set at perhaps two metres, and rigorously enforced (maybe with a public awareness campaign that encourages reporting), would deal with the substantive problem.

Glen Eira Council suggests the use of “Snap Send Solve”, a free smartphone app that sends reports of issues to the relevant authority. See: http://www.gleneira.vic.gov.au/Contact-us/Snap-Send-Solve
It makes it really easy to report issues while on a stroll. I’ve used it to report storm damage, leaking water pipes, blocked drains, broken drain covers, overhanging branches, downed street signs, abandoned trolleys and cars etc. Depending on where you are and what the incident is, it gets sent to the water authority, the Supermarket chain, the local council etc.

“I used a stricter criteria than the council. The council standard is 3 metres of clearance. I decided I’d only report it where I had to duck to walk under it (I’m about 1.8 metres tall)”. Surely then you’re using a looser criteria – 2m clearance is fine by you but not the council?

It’s almost as bad on designated cycling paths. There are generally fewer, because they’re owned by various councils and agencies (it’s never clear who), but the consequences of a tree branch to the head are much more serious when you’re above the ground and going at a moderate speed – you could easily end up in hospital with serious head or spinal injuries.

When I worked at Whittlesea council at the turn of the century, they were running a comprehensive inspection program on this problem. They sent out hundreds of notices to landowners, instructing them to trim vegetation or be fined and levied with the costs of the council doing it for them. I assume they still do it up there, every few years. So other councils just need to do it too – it’s not that hard and it provides casual work for people doing the inspecting.

The three metre limit was originally ten feet and dates back to when people rode horses. Ten feet was the height of man on a horse!