There are undoubted challenges to writing information that has to fit into a limited space.

Here’s one I noticed recently where perhaps they haven’t got the balance quite right.

Bus route 605 was recently changed at its City end, to run via the Botanic Gardens, Southbank and Queen Street to Flagstaff Station, instead of the old route via Flinders, Queen, Lonsdale and Exhibition Streets.

What’s with the southern end of the map, going off in two directions at once? From the timetable it appears that outbound it goes along Gardenvale Road, and terminates near Nepean Highway. But inbound it starts on North Road, some distance away – presumably the bus runs empty from the outbound terminus to the starting point. Perhaps they kick all the passengers off on Gardenvale Road? It would seem more logical to run this, and show it on the map, as a loop, as at the City end.

Anyway, this modified route resulted in some interesting abbreviations on the destination display.

Is this very meaningful to people? I’d have thought simply “Flagstaff” means more to Melburnians. True that can mean the station or the gardens, but they are adjacent to each other.

You could also abbreviate Station to Stn, though this can be problematic if rendered in low resolution capitals – STN can be misread as STH (South).

(The terminating stop is actually half a block from Flagstaff Station, but that’s probably quibbling — more people would know where the station is than the County Court, which is actually where the stop is.) 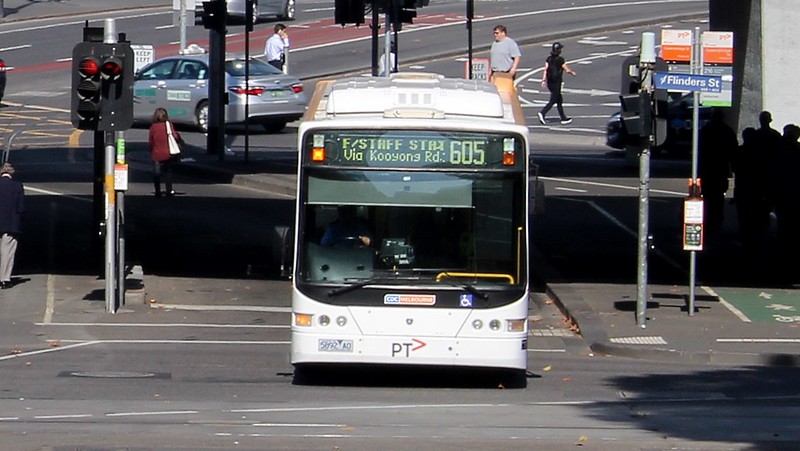 In both directions, the bus is going via “ROYAL BOT GDNS”.

Reminding people that it runs via the Botanic Gardens would have been important when transitioning to the new route. But I’m not sure this is very clear.

Perhaps it should have said via “Botanic Gardens”? Or choose another nearby landmark and simply say “Shrine”?

Not that this bus route specifically should be singled-out.

For decades, southbound 78 trams proclaimed they were going to “Prahran”, which they pass through about 2km before terminating down in Balaclava. They now say “Balaclava via Prahran”.

Squeezing information that is meaningful yet brief is an ongoing challenge for public transport destination boards, so I’m sure there are other destinations and abbreviations around the place that are a little vague.

What potentially confusing ones have you seen?

A pet hate of mine is scrolling displays where you have to wait to read the whole destination. Standing at a stop hailing a bus in traffic you often don’t get long to identify your bus and flag it down. Similarly running down a ramp to catch a train and then having to wait through several screens of information to see if it stops at your station and almost missing the train in the process.

In all seriousness, I find the 858 a bit weird. It’s almost a complete loop, but they choose to run it in a horseshoe shape with two termini (Aspendale and Chelsea) and a loop at Edithvale. Picture here:

The Route is stated as “Aspendale Gardens to Edithvale via Chelsea,” but as somebody new to the area I was confused since Chelsea is a major detour from the two. If they closed the loop they could just have an “Aspendale Gardens Clockwise/Anticlockwise”

I would have thought Gardenvale – City was better description. Of secondary importance to most people would be exactly where in the city the bus terminates. People can get off within a block of Flinders St station or anywhere along Queen St. I bet only a small number of people get off at Flagstaff.

If you went back in time 50 years they were probably advertising ‘seats’ and ‘engine’.

Where buses go to “the city”, I find more of an issue locating the outbound stops than the inbound ones.

On an inbound bus, you can guess which is going to be the nearest stop to your actual destination to alight at. And if you guess wrong, you probably only have to walk an extra block.

Finding out where to catch the outbound bus from, can be much more challenging.

I’ve seen some bus destos using “RS” to represent stations. I wonder if they could fit in “FLAGSTAFF RS”.

Also other than The Shrine, if I am not mistaken the area is called King’s Domain, so there’s that option too.

Similar issue with destination screens and maps/information for trains, naming lines based on the end station on the line regardless of whether this is the largest destination or not. The worst offender here from my experience is the ‘Laverton’ line. Noone going to Laverton takes this ‘line’ as it takes the slower route via Altona, compared with the direct-to-Laverton ‘Werribee’ line.
I guess rightfully renaming this the Altona line (or at the very least Laverton via Altona) would make those Altona loop bypasses even more awkward – Welcome to the Altona line, stopping all stations except Altona stations.

The word “via” is a problem. The 216/219/220 busses say (or at least used to say) something like “Sunshine via City”, even after they have already passed the City (ie going through Footscray). And I think it’s the 409 that says “Highpoint via Footscray” even after it has passed Footscray. Makes it sound like you have to go backwards to go forwards. Which describes many of Melbourne’s busses, really.

To be fair, the “via” wording can’t be helped unless the desto is adaptive and changes as the tram or bus passes through areas.

The use of “via” existed before electronic sign boards too.

I guess this is with the practice of Melbourne using terminating stations as line name, with the exception of “City Loop”.

When I was new in Melbourne, I remember getting really confused at Melbourne Central as I was trying to figure out how to get to a destination at peak hour and was previously told to board a specific line. I was confused because peak hour services often terminate at stations halfway through the line (or something to that extent), and I couldn’t find the line I was supposed to get on looking at the schedule screens and I haven’t had the locations of stations memorised yet. For example, I was trying to get to Fairfield, but the next few trains leaving were “Greensborough” or “Eltham” while a friend previously told me to get on the “Hurstbridge” line.

Tram route 78 with ‘Prahran’ as the destination actually dates back to cable tram days, when trams were painted with the names of the suburbs it passed through. – with the most prominent of these on the trailer car ends – which in this case was Prahran, although the terminus was then in Windsor. When Chapel Street was converted to electric traction back in the 1920s, the Tramways Board just continued existing practice.

I’m sure many non-Melburnians have been confused on route 59, when trams returning to the depot located in Ascot Vale show Essendon Depot – which is several kilometres away from Essendon. That’s history for you.

with the sign changing between the three displays above in rotation every 0.5 seconds.

Thanks. The more you know.

Though to be fair one of the first places I lived in Melbourne after moving here was on the 59 line. I learn pretty quick that the depot was named after the city it was in prior to the amalgamation of LGAs.

Does it matter that different buses on 605 route show slightly different destinations when heading to Flagstaff? Although all the buses state “Flagstaff” in some form, presumably because there are some older and some newer buses on this route, the precise wording differs slightly.
More confusing is waiting for a 605 bus in Queen Street heading out of the city. The 219, 220 and 605 buses all state “Gardenvale”! And perhaps it’s just me, but often they seemed to be “bunched up”.
Almost makes us wish for the “old days” when the Kooyong Road bus was affectionately known as the “brown bus”. At least it was easy to distinguish, but it was somewhat inconvenient having to catch it from Batman Avenue (pre Fed Square).
Also related to catching a 605 bus outbound: there’s a stop north of Bourke St, but after that the next stop is on the south side of Flinders St, just before Queensbridge. I suppose there might be “issues” having it also stop somewhere near Collins St, but the existing arrangement does mean there’s a long distance between stops.

The Chapel St cable tram terminus was Carlisle St, only a few hundred metres from the electric tram terminus. Both are in St Kilda but metres from the suburb of Balaclava. The destination name for the short shunting terminus outside the Astor Cinema is Windsor (which is just the other side of Dandenong Rd), meaning before the destination name change, trams going south saying Prahran were going further south than those saying Windsor were.

These destinations were reprogrammed to allow the former Driver Bus Lines fleet to run routes 601/605 & 630 and vice versa. Most of them (including this one) look horrendous with destinations including:

Is it better or worse?