The new Clayton station opened this morning, and I went down to take a look.

The design is very similar to Noble Park, which opened in February.

A ramp just west of the station (and Clayton Road) brings the trains up onto the elevated section.

From there, the track is entirely elevated as far as Centre Road, where it then drops back down to ground level before reaching Westall station. 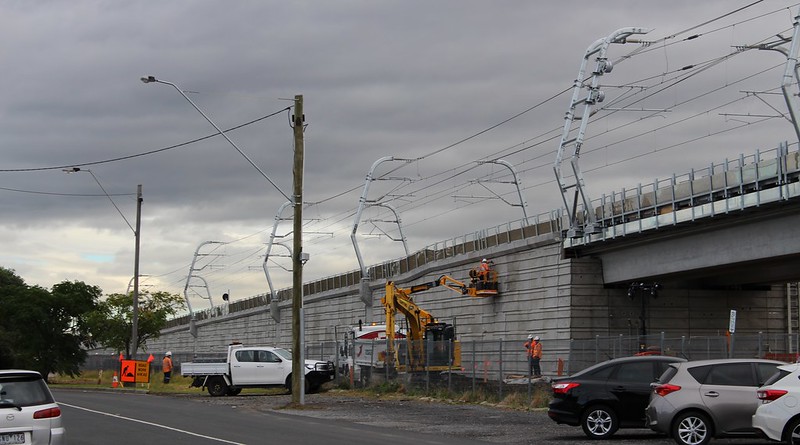 The new track alignment is on the north side of the old one, with the old station building remaining in place for now. (The old outbound platform shelter was removed some time ago, and will be re-located somewhere in the station precinct in the future.) 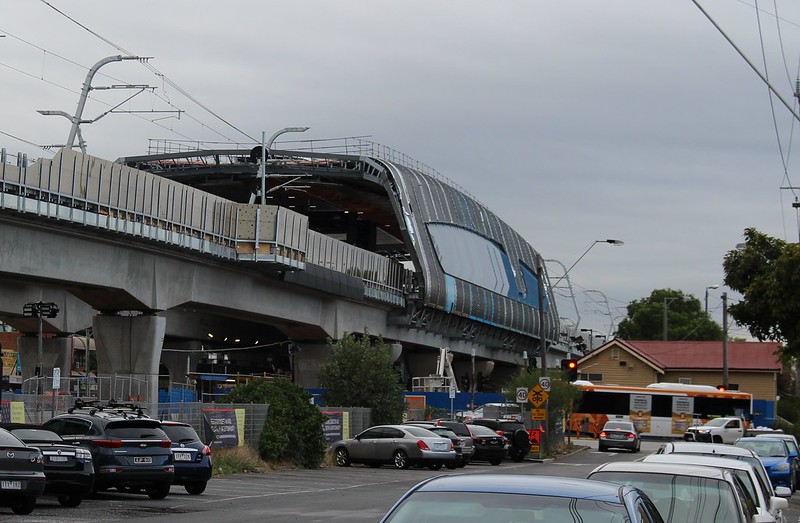 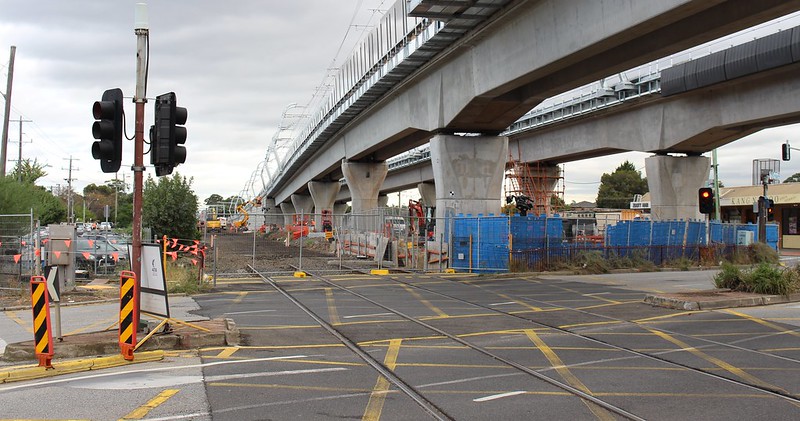 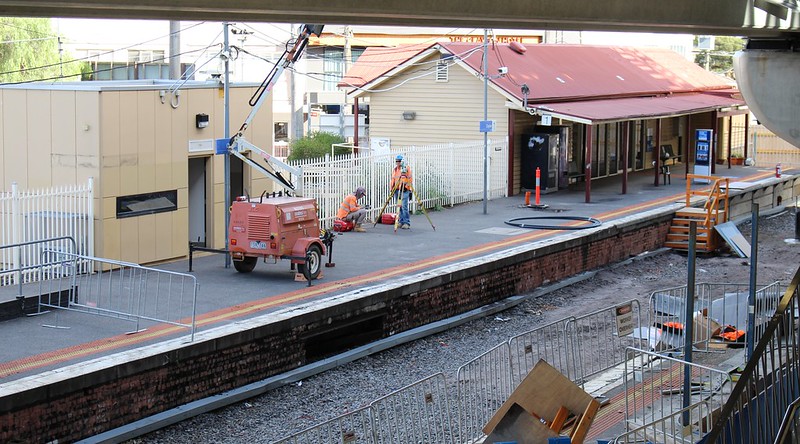 There’s a lot of work continuing today, but the basics are in place: the main structure is there, along with temporary buildings at ground level for PSOs and Metro staff. 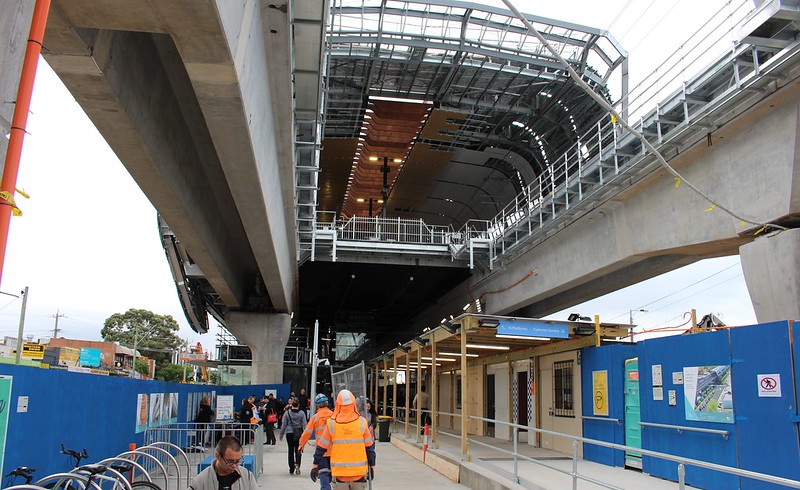 Fare gates (with the newer fast Vix readers) have been installed, as have screens at the entrance displaying train departures. They’ve had live music performers there this morning, as well as giveaways of coffee and snacks. 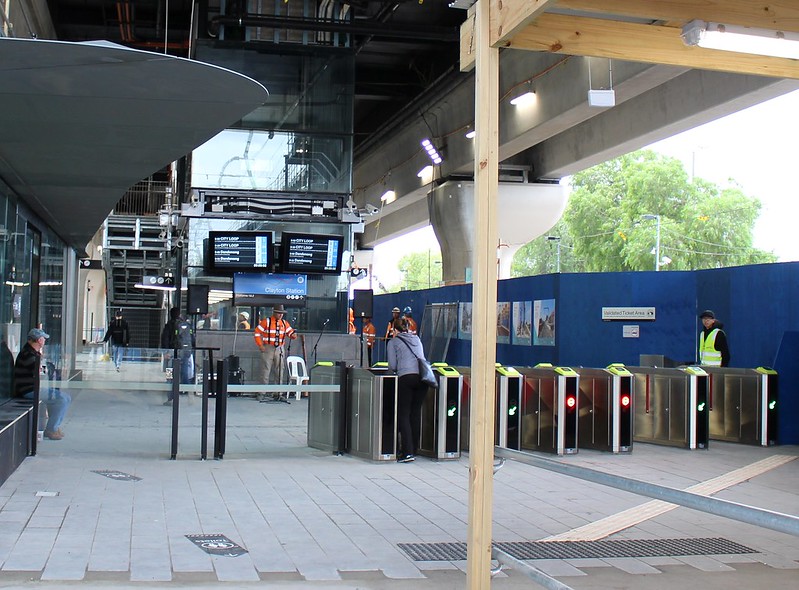 To get to platform level you have a choice of escalators, stairs or lifts (one of the two is working today). I did encounter one lady who seemed very nervous about going up – she didn’t want to use the escalator, and also seemed reluctant to use the stairs or lift. Hopefully she can find a way to still catch a train here. 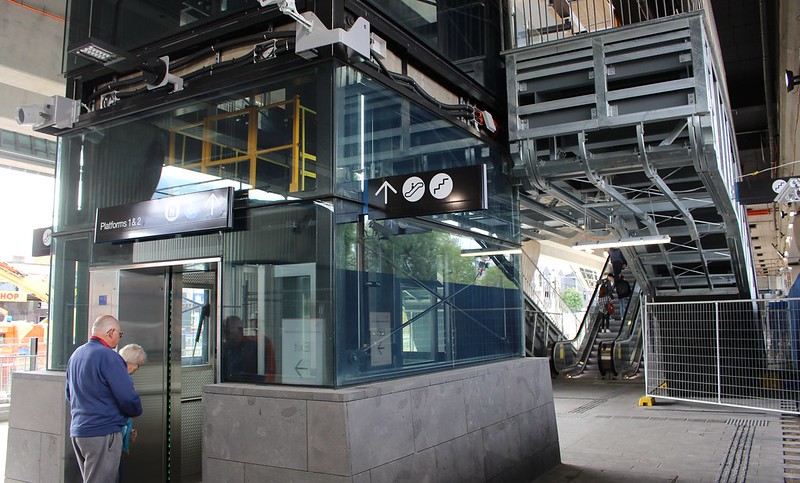 Some signage would probably help educate passengers of the etiquette of standing on the left of the escalators. 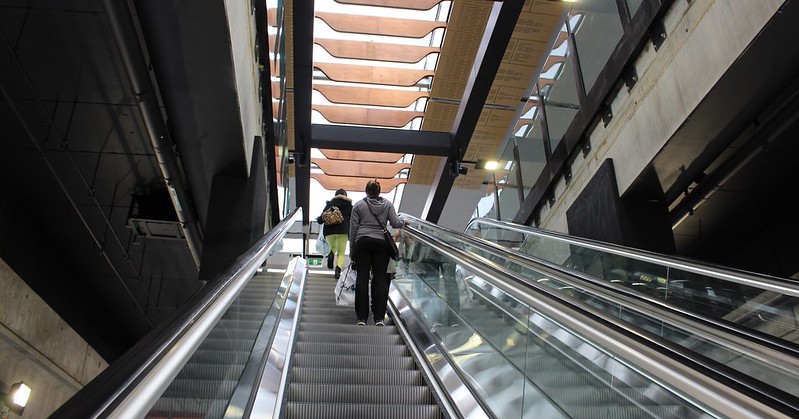 As at Noble Park, the island platform is pretty spacious. A wraparound structure gives a degree of weather protection, though I’d have to say it was pretty windy up there. (It was a windy morning. At ground level, the wind blew over one of the performer’s music stands.) 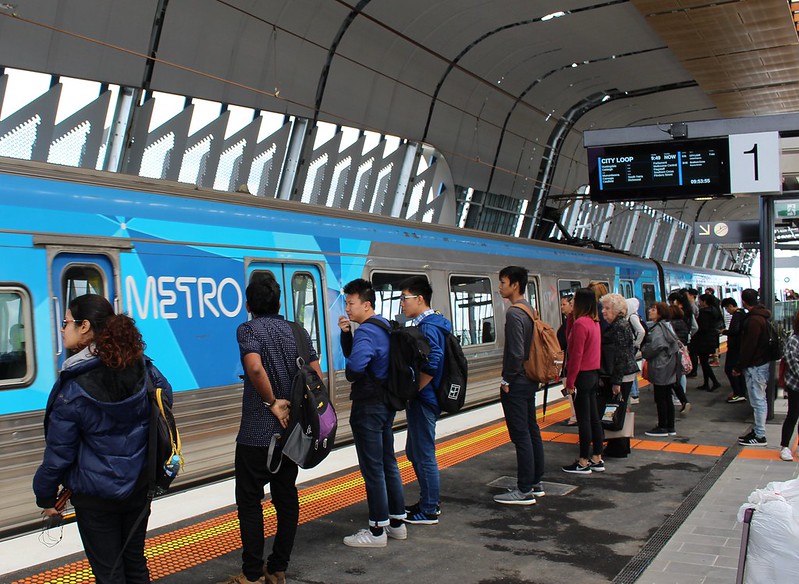 The eastern end of the platform has less weather cover, though more is coming. 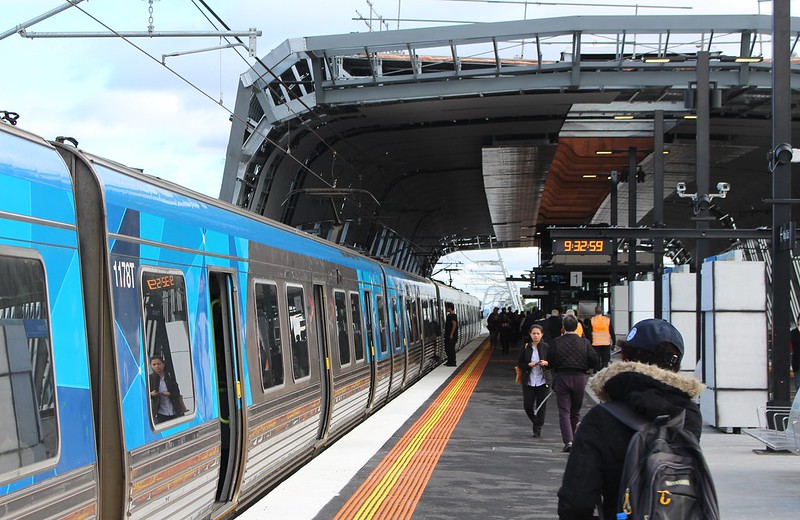 Platform PIDs (Passenger Information Displays) were operating, though I noticed a glitch or two. Pretty sure this train wasn’t going to Traralgon. 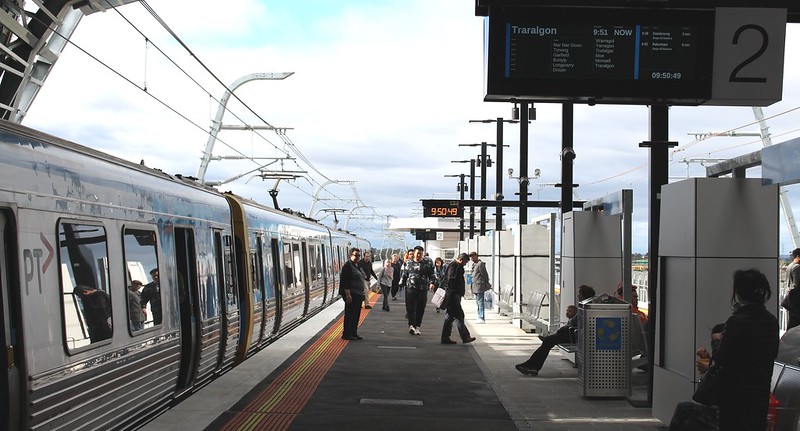 …and when a V/Line train did appear, “Not taking suburban passengers” was displayed, which is correct — but subsequent train departures disappeared off the screen, which is not ideal. 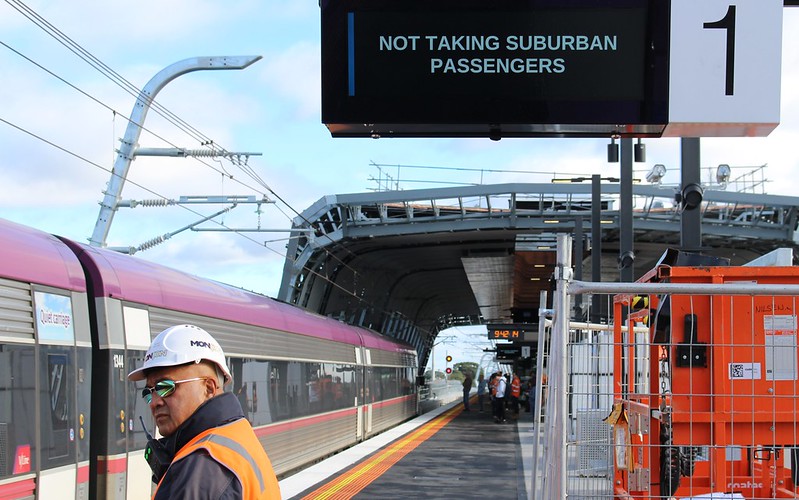 Having arrived by bus, I caught a train to Westall and then back again. The ride was pretty smooth, and it’s not noisy. 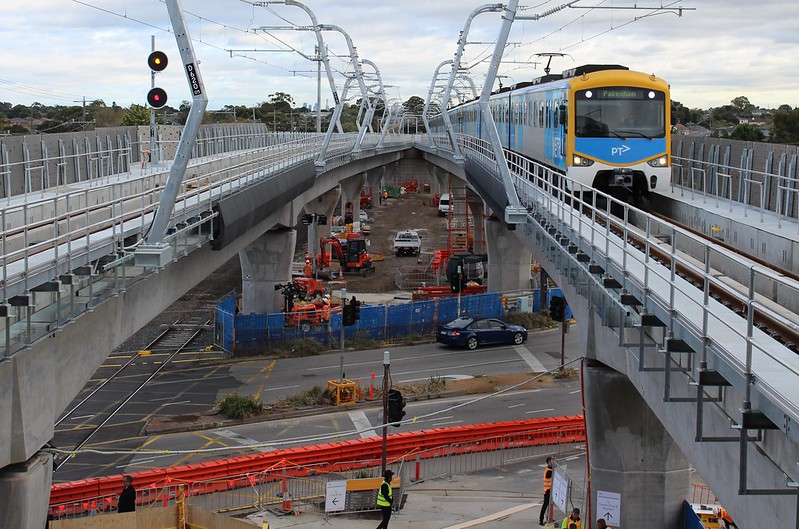 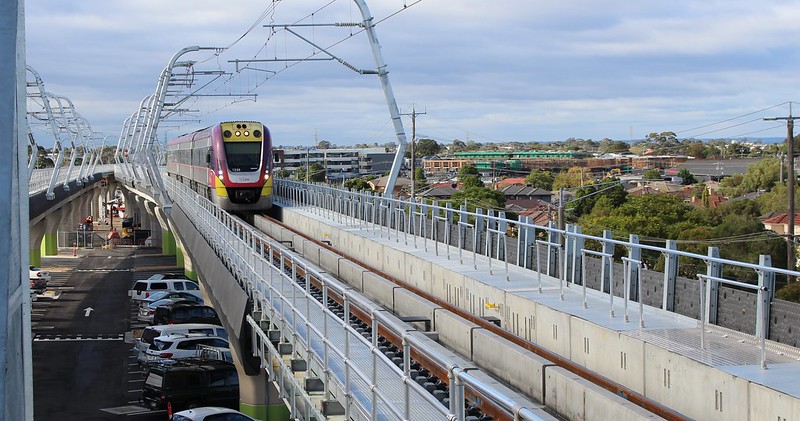 Skyrail is controversial, but the Clayton section, like Noble Park, is less so than the inner section around Murrumbeena, because there is some space around the tracks, reducing impacts on local residents.

As at Noble Park, the challenge at Clayton will be for the Level Crossing Removal Authority to beautify the area beneath the tracks and get it functioning.

This will include an access road so that passengers can interchange between trains and northbound buses without crossing any roads — which will make up a bit for the station itself not having exits on both sides of Clayton Road.

But the station itself is functioning, which is good. The benefits of the Clayton level crossing removal will be widely felt – ambulances to/from nearby Monash Medical Centre will no longer get held up, and we should expect to see bus punctuality in the area improve. (Already the 703 into Bentleigh from Clayton seems to have improved already.)

The old Clayton station design also meant that passengers had to regularly cross the tracks when using the station. No more delays, and disruptions due to incidents should disappear.

The inner section of skyrail (covering Carnegie, Murrumbeena and later Hughesdale stations) is expected to open after the winter school holidays.

Thanks for the report & pix, Daniel.

I can’t view flickr-hosted photos at work, so I’ll have to get out and have a good look around on the way home. The view on the way to work was pleasant – less to look at to the north than Noble Park, but much longer to the horizon on the south.

Today’s weather will be perfect for testing whether Clayton having a different canopy that other Skyrail stations is a good or bad idea.

Improved PIDs at Noble Park and Clayton are welcome. Both are common interchange stations because Pakenham trains don’t stop at Yarraman or Westall in peak hour. It’s nice to know when the next train actually stopping at your station is coming.

The benefit to access for the nearby hospital, is a major issue to me. That makes this section, the one of which I was most keen on seeing happen.

I will be on it for sure this Thursday.

I like the exterior of the station. I am across this a few years ago. No fire now. “Should you miss your train (at Clayton Station) and have to endure a one hour wait, there is a warm fire in the waiting room. It may not be possible to get too close to the fire though as it is often surrounded by dogs.”

Does any section of elevated rail so far include points for a turnback?

Are there any plans to roll the Vix readers out to more existing stations? The old readers are a huge bottleneck at Williams Landing.

@Kevin, no. I don’t think any are planned. They can turn back trains at Westall, Dandenong and I think Oakleigh, as well as Caulfield.

Another interesting article Daniel. If you don’t mind sometime, please consider writing an article about the proposed airport line and associated developments. I know you have written previous articles on it, but you have interesting opinions and often reveal things I haven’t heard about.

Wow, great photos. It really reminds me of a suburban Singapore station, except with not as much rooftop coverage.

Daniel, Many thanks for your great opening day coverage of this project at Clayton. Elevated rail has certainly been the smart solution to fix the former bottlenecks of Clayton and Centre Roads.

We had fun yesterday morning with the food and entertainment. What with Southland, Noble Park and now Clayton, we are getting quite a long model Xtrapolis train being built courtesy of the showbags.

Great to see my local station back, and it’s an order of magnitude improved already. The congestion is gone (both pedestrian and traffic). Buses are not being held a km or more either side of the (now removed as of last week) boom games. You feel as if you can reach the hospital in a timely fashion now. It will be fantastic when the precinct and station cladding is fully complete.

It was interesting sitting there when a goods service rolled through at around 9:50am this morning. Certainly some vibration through the platform!

Adrian, unless they were recently removed, they had “stand on the left” signs at Melbourne Central

I am expecting to see a major timetable overall announced in the upcoming state budget, to be implemented when Skyrail Stage 3 is completed.

Labor will want to be seen to be living up to the slogan of “more trains, more often” running into the November election.

I am glad that the Clayton level-crossing is now open for traffic, especially now that ambulances heading to Monash Medical Centre don’t have to wait for three trains to go across their path. I used to regularly get a train to Clayton when I lived in Traralgon, and when arriving at Clayton had to cross Clayton Road to catch the north-bound bus. It is really good to hear that the new station has an exit connecting the passengers to north-bound buses. Although this will not benefit me, as I have moved to Seaford, I will be happy to hear that other passengers and vehicle drivers will find things so much better.

“The inner section of skyrail (covering Carnegie, Murrumbeena and later Hughesdale stations) is expected to open after the winter school holidays.”

Hi Daniel, is Hughesdale not opening at the same time as Carnegie and Murrumbeena?

Hughesdale is the least advanced station as it has only just had the base of its platform put in over the same school holiday closure that Clayton was switched. It also has the lowest patronage on the 5 stations going up. So Hughesdale may be shuttles for a few more weeks that the others but at least the shuttles will be more accessible from Murrumbeena with the level crossing gone.

A better measure of the effect of level crossing removals would be how much traffic is moving through the crossing before and after (as a total, to see the effect of induced traffic), also what is the distance to the next obstacle/traffic lights? When you look at a lot of crossings, a lot of the delays are caused by adjoining pedestrian crossings, not just the boom gates. This won’t change, people will still need to cross the (now busier and potentially faster-flowing traffic) on the road. Seems to me that crossing removals in a lot of the lower-priority crossings anyway, are just moving traffic a few seconds faster to the next obstacle.

It is a pity that one of the assessment criteria used for ex ante economic evaluation of the level crossing removal program is the change in the average vehicle waiting time. There should also be a measure of the variability in vehicle waiting time, perhaps using the 90th percentile as the measure. For example bus timetabling can’t work on the mean delay, instead it needs to include a travel time reliability component. So changes to bus timetables through travel reliability improvements could be a good proxy. Other benefits that don’t seem to have been included yet include
– pedestrian delays, particularly train passengers
– increased retail turnover in adjacent shops
– increased land values
– increased train-bus transfers
– increased station patronage

[…] Carnegie and Murrumbeena are basically the same design, and similar to Clayton and Noble […]