One of the promises of the orbital Smartbus routes was to cater for crosstown travel.

The Bracks Government’s 2006 Meeting Our Transport Challenges document said this:

The Government will invest $1.4 billion to create a crosstown transport network for Melbourne. Major new SmartBus routes, supported by improved local bus services, will connect with the rail network to create a grid of radial, arterial and orbital routes within and between suburbs and across the city. For the first time, people living in Melbourne’s middle and outer suburbs will be able to travel across town by public transport without going through the CBD.

I thought I’d test this claim.

The four proposed orbital routes were:

The Blue Orbital/904 never happened. Arguably the Sandringham end was a bit pointless as it paralleled the railway line, but the rest would have been very handy for orbital trips, saving people time, and relieving demand on the busy inner-city portions of Melbourne’s busiest tram and train routes. The idea is still the subject of campaigning.

The absence of this route is why there’s a gap in the Smartbus numbering – 901 to 903, and the Doncaster routes 905-908 (also flagged in the MOTC document). There’s also the 900 non-orbital Caulfield to Rowville Smartbus route.

And there’s also the 703, which was one of the first Smartbus routes trialled, but was never upgraded to the full Smartbus service level.

The western end of the Green Orbital also never materialised. It stops at Airport West. Parts of the rest are now served by the Regional Rail Link (V/Line service via Wyndham Vale and Tarneit), but the long distances between stations means that is mostly used for longer distance travel. A revamp of local buses at the Werribee end has provided other upgrades. 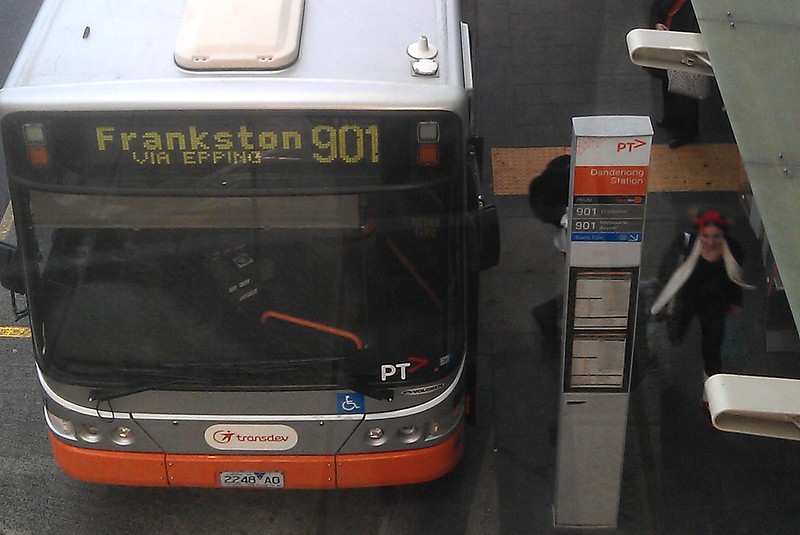 The Smartbuses have become the busiest bus routes in Melbourne. This is partly due to their length, but also because they offer some of the most frequent services in the metropolitan area – mostly streets ahead of other bus routes.

Did Smartbus deliver on crosstown travel?

So, do Smartbus routes really provide a crosstown trip alternative to going through the inner suburbs/CBD by train?

Here’s how I compared them:

So is Smartbus faster than train?

In summary, Smartbus is faster only for short distances.

Here are the results. Bus travel times on the left — highlighted in green where faster, red where slower. Train times on the right. (Click to enlarge)

The 901 runs from Melbourne Airport to Frankston:

The 902 runs from Airport West to Chelsea:

The 903 runs from Altona to Mordialloc:

The proposed 904 (blue orbital) would run from Williamstown to Sandringham, but I’ve focused on the section from Footscray, and assumed if ever implemented it would (like the 246 it would presumably replace) terminate at Elsternwick:

Because this route doesn’t exist, I’ve used the times for the 472 to Moonee Ponds (even though the proposal goes via Highpoint, making it more useful, but taking longer and duplicating the 82 tram and partly duplicating or replacing the 223 bus), the 504 from there to Clifton Hill, then the 246 the rest of the way.

And finally, the 703, the only Smartbus that does not meet the service standard, runs from Blackburn to Brighton:

(*Westbound buses come into North Brighton. They then do a loop, with eastbound buses heading out of Middle Brighton)

What do we learn from these timings?

In general when the trip was one sector, between two neighbouring lines, the bus was faster.

For trips covering one or two segments it varied. Sometimes bus (particularly for trips a long way from the CBD), sometimes train.

For longer trips, it’s usually faster by train, even if the journey is a much longer distance, and even if the train interchange at or near the CBD has you arriving and then departing at a near 90 degree angle. For instance, Sunshine (almost due-west of the CBD) to Coburg (almost due-north) is 61 minutes by bus, but 42 by train.

For the longest crosstown trips, such as Broadmeadows to Frankston, train is the clear winner thanks to its more direct route and inherent speed, with a travel time under half of the bus, which goes the long way around, and may be deliberately (and sensibly) designed to serve traffic generators such as major shopping centres.

Something I haven’t compared is car travel. Even though buses and trains can suffer delays, driving is far more variable. It’s likely to be faster than bus in all cases, and often faster than train outside peak hours — but this is slowly changing. With traffic congestion now increasingly an all-day, all-week affair, train is increasingly competitive for crosstown trips.

I also didn’t look at crosstown tram routes such as the 82 (Footscray-Moonee Ponds) and the 16 (Glenferrie-Malvern-Balaclava). Maybe something for another day. There are also, of course, many crosstown non-Smartbus routes. 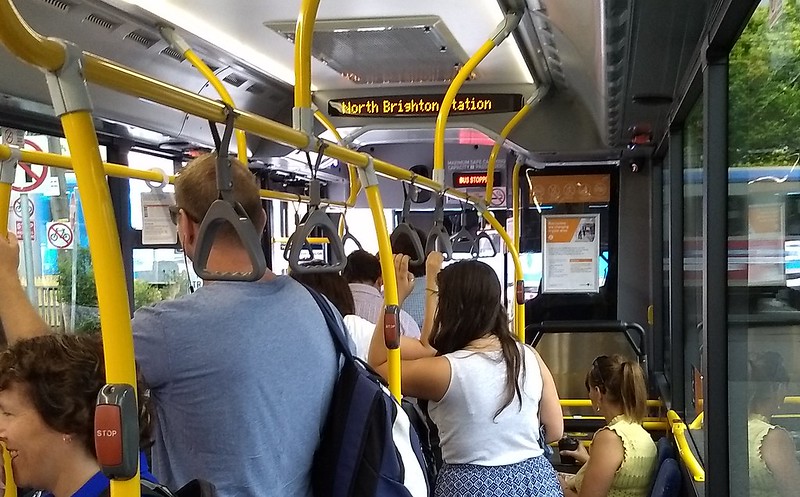 Train times can be inconsistent where frequencies on the two lines are not aligned. For instance Coburg (every 20 minutes) to Holmesglen (every 15 minutes) came out at either 58, 63 or 68 minutes depending on the precise time of departure. For this exercise I always chose the one at or just after midday – for this case it was 58 minutes, but for others it could be the lowest or highest figure, not the middle.

When I chose midday as the start time, I didn’t realise that for train trips via the CBD, this narrowly avoids traversing the Loop outbound. With a slightly later start time, you might even go around the Loop twice; for instance if you wanted Sunshine to Box Hill, leaving on the 12:24 train from Sunshine, you’d go around the Loop into Flinders Street, just miss a direct Box Hill train, and go around the Loop again on the next departure, arriving at Box Hill at 1:31… which at 77 minutes is still far faster than the bus.

Some of the Smartbuses stop at multiple stations on the same line, for instance the 901 at Blackburn and Ringwood, and also at Kananook and Frankston. These segments are probably most useful for local trips, but some might use them as an alternative route when trains are disrupted.

In peak hour, the results would be even more skewed towards trains. Buses take longer in heavier traffic. Trains on most lines are more frequent in peak, and (particularly on the Hurstbridge, Belgrave/Lilydale and Frankston lines) there are more likely to be expresses.

On weekends and in the evenings, the results are also likely to be more skewed towards trains, because bus frequencies drop off markedly, making the chances of a departure time that’s convenient rather less likely. (Just ask anybody who’s tried to catch a 703 at the Bentleigh/Brighton end of the route after 9pm on a weekday. There aren’t any.)

Anti-clockwise results might be a bit different to clockwise.

Most importantly, individual passengers may or may not prioritise fast travel time over other factors, such as their tolerance for interchange. 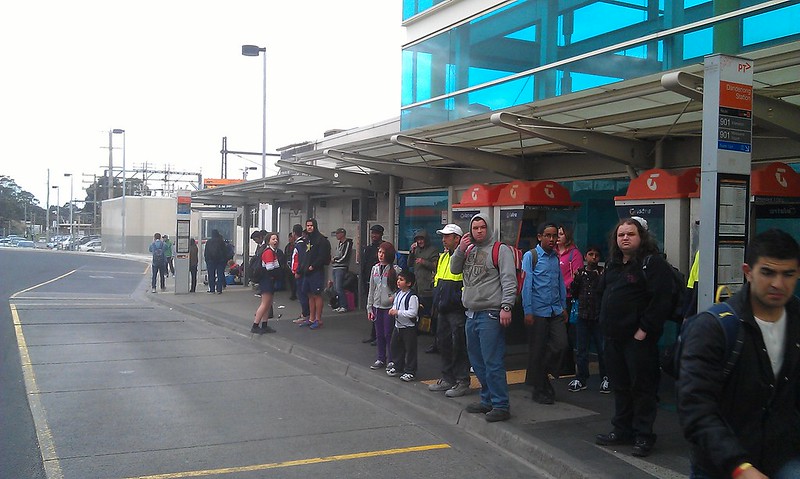 There are various things the authorities can do to make the buses faster.

There’s a limit to what buses can do. It should be recognised that train is inevitably often quicker for longer trips, even when quite indirect, and generally is the mode of Melbourne’s PT network that is most likely to be competitive with car travel. Trains are the backbone of the network, and frequencies need to be boosted to cut connection times, though this is an issue across all modes.

Given buses generally aren’t great for long suburban trips, we shouldn’t feel bad about splitting Smartbus routes to make them more efficient and reliable. Transdev are getting flak for poor performance, but I think (broadly speaking) they had the right idea around splitting the orbital Smartbus routes into separate segments. 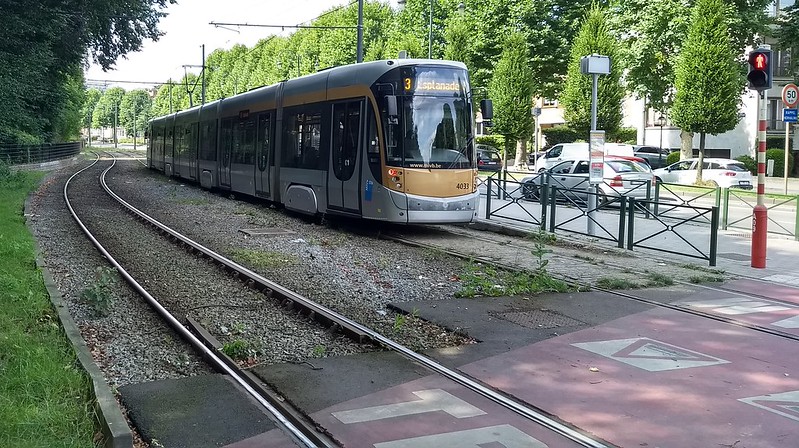 Looking into the future, improving options to a point where the speed and frequency is competitive on orbital trips could definitely help relieve parts of the radial rail network — for instance, in the past proposals have been made for express buses connecting from Caulfield to the Ringwood lines.

What about orbital rail lines? My sense is that the travel patterns probably don’t warrant heavy rail, particularly beyond the inner suburbs.

But fast efficient off-road light rail or busways might be a good option. If built properly, segregated from traffic, with priority where they cross roads (Brussels has some good examples), they can be very fast, and could be a good middle ground in terms of capacity, while still maintaining good frequency. 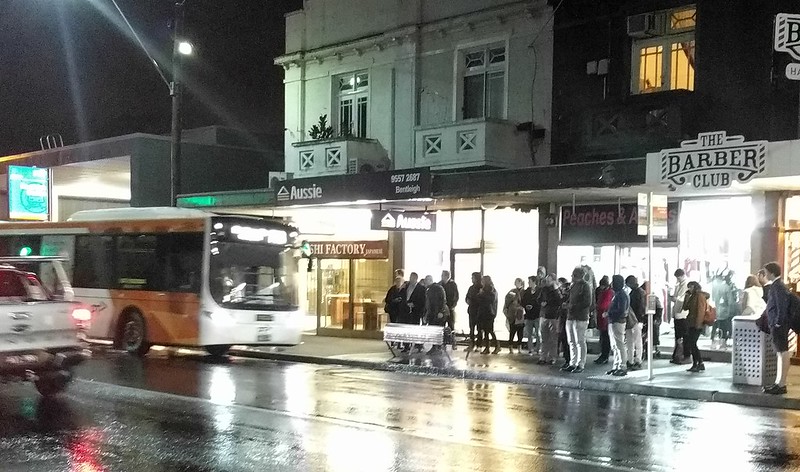 But by providing frequent services, they are very valuable for short distance trips, short to medium-length journeys into activity centres, and as rail feeders.

Looking at the big picture, public transport needs a lot of improvement – there are so many journeys where the service offering is simply not competitive.

Catering for orbital journeys is part of this, but there are many other needs, including beefing up capacity and frequency for the far more numerous radial and local trips. Improved connections to/from the rail backbone are also critical.

And in most respects, Smartbus has been proven to be successful. We just need more of them.

14 thoughts on “Smartbus vs train: What’s faster for orbital travel?”