I’ve posted about Rule 128 before.

The Age recently got hold of figures revealing there were just 18 fines per month for this offence in 2016-17. Yet it’s a constant problem in the CBD, especially during peak hours.

People had told me it was particularly bad at the corner of Flinders and Swanston Streets in evening peak. I don’t normally go that way on weekdays, so I took a look on Thursday night. They were not wrong. 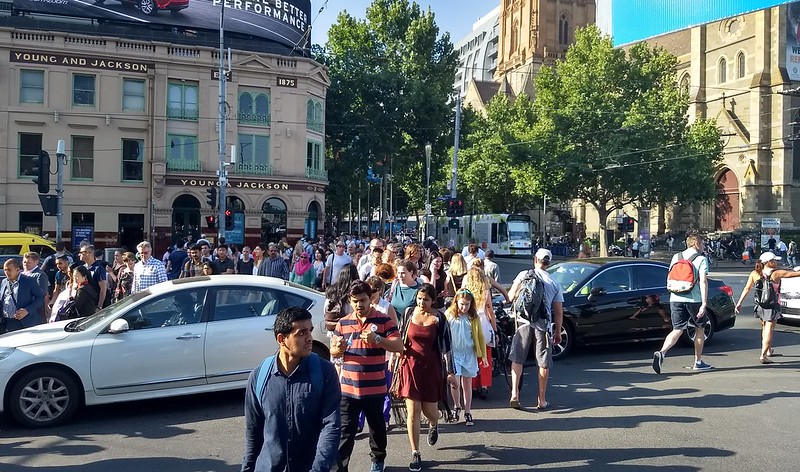 Every traffic light cycle is like this. The photos in this post are all from Thursday between 6:06pm and 6:23pm. 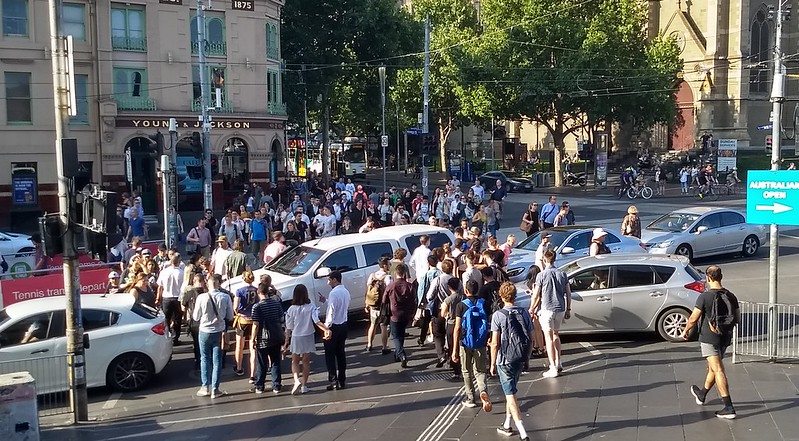 I asked a passing police officer about it. The reply: “There’s nothing we can do.”

And he told me pedestrians sometimes cross against the lights, delaying traffic. He said it twice. It’s mentioned in The Age article too.

Well yes, sometimes that happens. And yet, it’s irrelevant. The only thing that was delaying cars at this intersection was other cars.

Are “there’s nothing we can do” and “pedestrians also do silly things” a standard talking point coming down from management?

You can bet if a few pedestrians started blocking traffic, the police would move in fast. Remember the case of Jafri Katagar, the “Stop Racism Now” protestor?

Watching this happen every single cycle was almost excruciating.

It took ages for this bloke in the wheelchair, and his carer, to find a gap between the cars on the crossing, that was big enough for them to squeeze through. Ditto the bloke with the pram, just visible on the right, trying to get back to the ramp to the footpath after going around the cars: 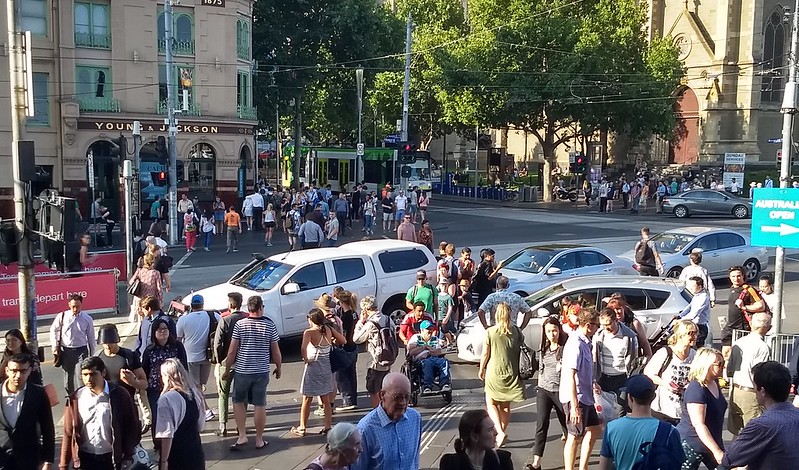 Mostly, north-south trams were not being delayed, though every so often there would be a close call with a westbound motorist. Eastbound traffic (from Flinders Street or St Kilda Road) wasn’t being delayed. 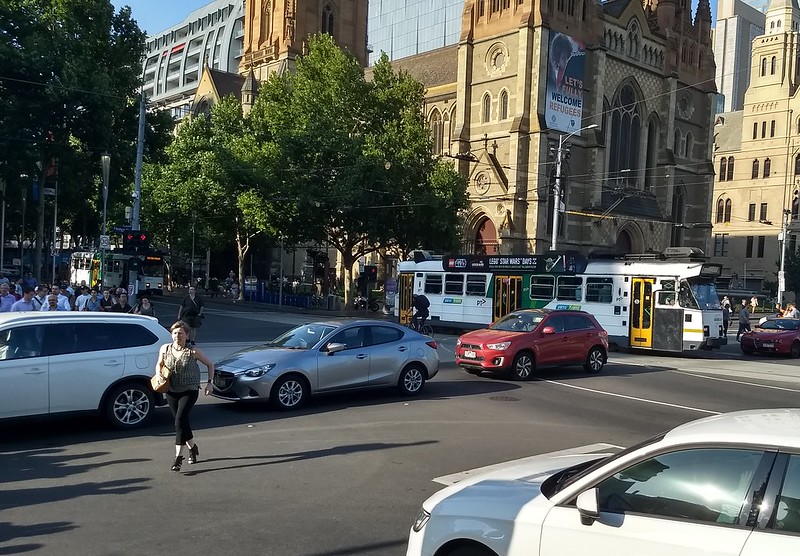 This westbound tram came through. It had the green, but a vehicle partly blocking its tracks on the far side made it stop before it could get through. By the time it could move again, pedestrians were crossing, delaying it further: 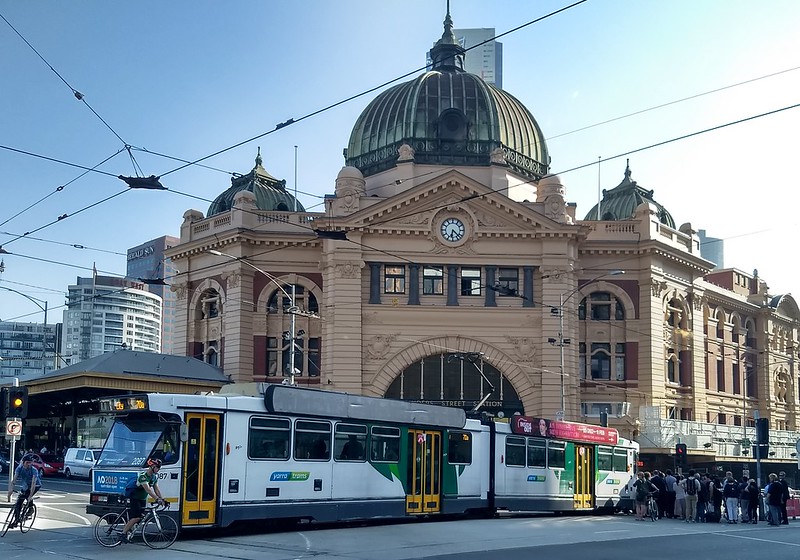 How do any of the authorities responsible for this mess think that it’s okay that this keeps happening? 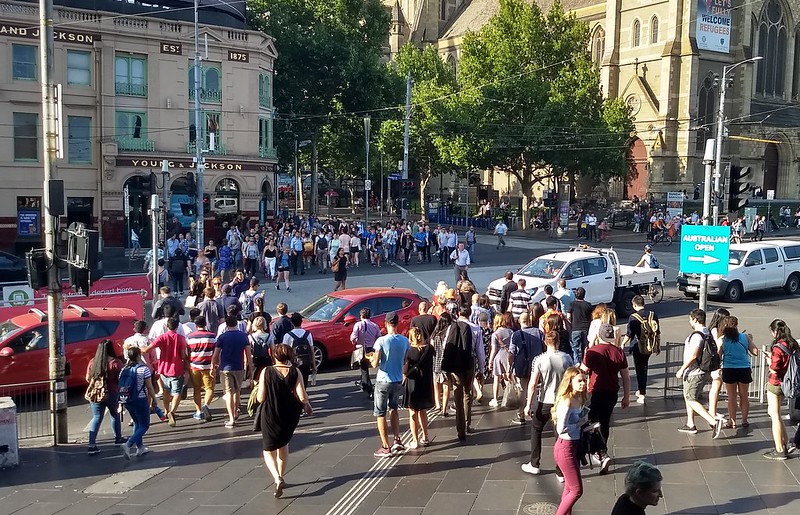 What can they do?

There are at least six things the authorities can do:

Get police to direct traffic. Put officers on duty and direct the traffic through, taking special care not to let vehicles enter the intersection unless it’s clear.

Start fining people. Put a few police officers there and fine each one that blocked the intersection. Publicise it, and I bet you’d soon see a behaviour change.

They do enough blitzes on pedestrians. It’s time they ensured motorists obey the rules and stop compromising pedestrian safety.

Signage and line markings. Crosshatching on the intersection; “Keep intersection clear” signs on approach. Of course the rules already apply, and similar markings even on level crossings aren’t infallible, but it can’t hurt to remind drivers of their obligations.

Educate people on the law. This problem is not isolated to this location. Right across the CBD, but also in suburban areas, motorists regularly ignore Rule 128. It makes things difficult and unsafe for pedestrians and cyclists, and delays other traffic. Some people clearly need reminding. 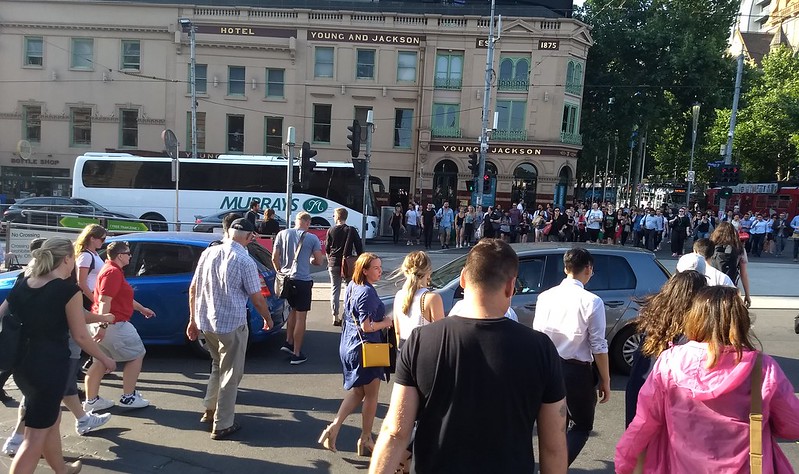 Close that option to traffic. If the busiest intersection next to the busiest entrance to the busiest railway station in Melbourne is continually breached by irresponsible motorists every single traffic light cycle, and authorities won’t lift a finger to fix it, it’s time to look at directing that traffic somewhere else. Remove one lane of the approach side to the intersection, and make all vehicles turn left there to St Kilda Road.

This is consistent with the method used in other cities to discourage traffic through the busiest part of city centres — for instance Toronto’s King Street — impose compulsory turns that prevent cars driving more than one city block.

There is likely to be a review of traffic flows in this area as part of the metro tunnel project, but this is a problem now — it can’t wait until 2026. 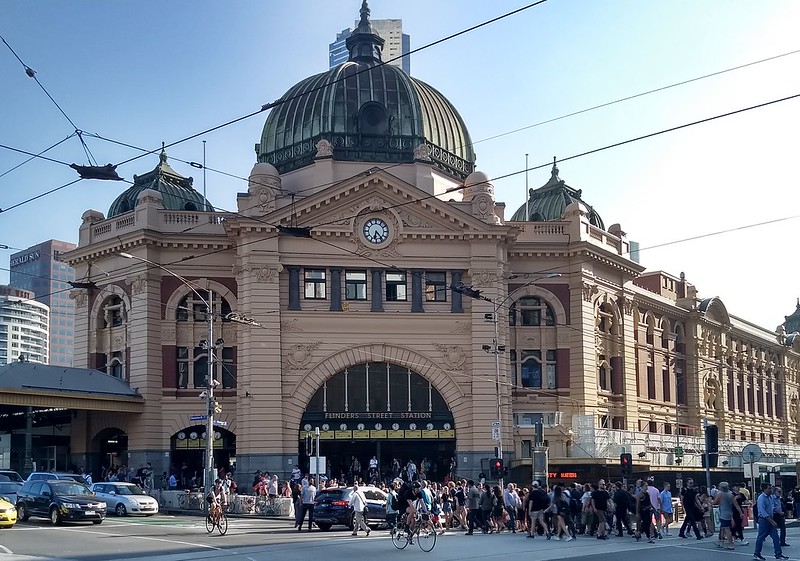 Upgrade the traffic lights. Make them only show a green to westbound traffic if there is space on the far side of the intersection. If it fills up, switch back to red. We’re always hearing about intelligent traffic systems. Technology could fix this.

Time to fix this

Some of these are immediate options. Some would take longer to implement.

But it’s an important location, and a landmark intersection.

Huge numbers of tourists take happy snaps in front of Flinders Street Station. What must they think of these incompetents who can’t prevent a few cars each traffic cycle causing havoc for hundreds of pedestrians?

And I must emphasise: this problem is a common occurance right across the CBD, particularly in the evening peak. 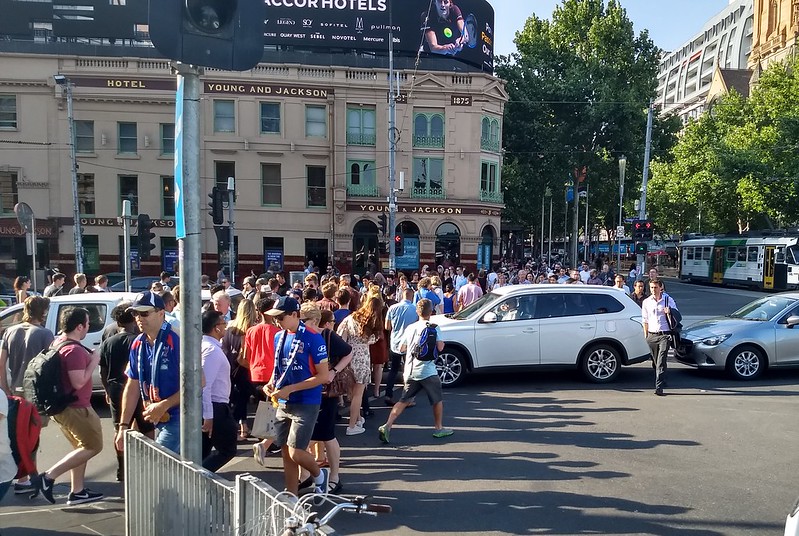 Victoria Police, Vicroads, City of Melbourne and Minister Luke Donnellan must take responsibility for this, and get it fixed. This is simply not good enough.

14 replies on “Melbourne’s landmark intersection is a debacle, and authorities are doing nothing to fix it”

Daniel
I walk across Flinders St every weekday to catch my evening train and I’ve never seen cars blocking the pedestrian crossing. But your pictures don’t lie!

Daniel,
As a frequent pedestrian around the CBD and suburbs, I agree with your passionate comments on this topic.

Might I add another contradiction that comes to mind. We have recently heard our leaders promise increased protection for pedestrians from motor vehicles that are used a weapons. And so we have seen the rapid deployment of temporary bollards in parts of the CBD. Yet this frequent, uncontrolled and illegal close interaction of pedestrians and motor vehicles is not addressed — only 100 metres from where innocent pedestrians were recently mowed down. Melbourne’s traffic congestion seems to have caught our leaders on the hop — without strategies, perhaps without a long term plan.

I don’t know if they get policed, but even with that they’re doing more about than problem than Melbourne is.

You have a few cars, usually with just the selfish driver, blocking trams with a lot of people. The police are weak for not doing anything about it.

There is another tool available to control this problem which is used widely elsewhere in Australia, red light cameras can be configured to capture all the drivers after the lights are red and no vehicle should be still inside the intersection.

Steam comes from my ears just reading this. You may not have seen trams blocked but they are frequently in the evening peak and at weekends at times. Remember the photo of the big screens in the old Yarra Trams operation centre in Eastern Road and no doubt VicRoads has similar. One camera showed the intersection, larger than life. What do they do when they see this mayhem? Sit there and laugh?

The UK does have what Melddblog describes, cameras snapping stationary cars in intersections.

Road hatching is ugly, and does not seem to be understood by Melbourne drivers anyway.

Elsewhere in greater Melbourne, queue detectors are used to hold traffic back to prevent blocking of intersections. If cars are stationary on the far side of the intersection, those wanting to enter do not get a green light until there is space on the far side. EG, in Moreland Road at Sydney Road where the traffic banks back from the railway boom gates. Also High Street Glen Iris, again connected to the level crossing.

It is rare, but I have noticed a couple of times that VicRoads must manually take control of the lights as eastbound Flinders Street traffic and north bound turning right traffic in Swanston Street get a shorter green light phase. But I’ve only seen this when there is bank up of south heading trams at Flinders Street.

In the 1980s police did stand in the intersection on point duty. That at least is even more needed than back then. They had little tolerance of hesitant or incompetent driving, often calling out ‘Move’ and ‘No, straight ahead’.

Whatever, it is a disgrace.

I would not recommend cross hatching because it blurs the contrast between road intersections and level crossings.
I guess that one reason for level crossing queue-related crashes is that people mentally think of the level crossing as just another intersection, and don’t realise that queuing on the line is not just discourteous to other motorists (like blocking an intersection), but puts them at risk of imminent death.
Signage and road markings should make the difference clear. I think the standard level crossing cross hatching and sign is not nearly alarming enough. It should include a large skull and crossbones.

Completely with Geoff Brown on this.
Plus with the height of many vehicles now, they often couldn’t see children over their hood if they started crossing on a green man… but many drivers queued don’t wait for the next green, they just push through when they ‘think’ it’s safe… when often it’s not.

And I have noticed trucks and buses that can see stationary traffic queues still enter the Flinders and Swanston Street intersection and block traffic.

“Blocking the box” is an instant fine in other large cities… It certainly solved New York’s formerly idiotic t intersections. Intersections like this are easy to police too… There’s already cameras installed, and everybody loves a fine in the mail.

Agree that cars queuing across the intersection is an issue at this intersection, but also of concern is the number of pedestrians who start crossing Flinders Street when there is a red man as is evident in the second part of Daniel’s video. One of the reasons for this is that the pedestrian demand is so high that there is not enough time for them all to start to cross when the green man is displayed.

I think some changes to how the traffic lights operate would be good to provide more opportunities for pedestrians to legally cross.

The lack of action by VicRoads is already at least partly the cause of the death of one person at the hands of a crazed driver.

They were given warning by the attacks a year ago, and since then have done nothing to protect vulnerable road users at one of the busiest and most iconic intersections and transport interchanges in the country.

On a more constructive note, the ‘Flinders Steps’ corner should be much much larger, and attempts should be made to enlarge and improve the pedestrian concourse and flow on the Fed Square side of the station, and at the Elizabeth St underpass and intersection.

I walked up to our local shops this morning, at Oakleigh. The two one-way streets through Eaton pedestrian mall are bumper-to-bumper slow moving traffic. Not a single driver keeps the two big pedestrian crossings free, and if they’re stuck in the crossing when their lights go red and people are walking around their cars then they just rev it up a bit and move through the pedestrians. Actually I did see one driver try and stop because the road the other side of the crossing was blocked, immediate result was that the driver of the car behind him completely lost the plot, lay on the horn, revved the engine repeatedly and “surged” his 4WD to within inches of the stopped car. Plenty of road rage, plenty of ignoring the laws, zero enforcement.