Night Buses are not running on New Year’s Eve tonight.

Most trams and trains are running all night — and it’s more trains than last year; half-hourly after about 2am, rather than hourly as last year. There are also some regional trains and coaches after midnight.

Night Bus routes are designed to fill the gaps between the trams and trains — especially the latter in the outer suburbs.

Not running them means many suburbs will have no public transport at all between about 10pm tonight and 7am tomorrow morning — including Mornington (and the rest of the Peninsula, population 155,000 people), Point Cook, Rowville, Mernda and others. Doncaster will have Smartbus routes extended until 2am, but nothing after that.

The Age ran a story on Friday: No way home for hundreds of revellers after Night Buses cut for New Year’s Eve

Almost all trains and trams will run all night on New Year's Eve. But Night Buses, which are designed to fill the gaps to places like Rowville, Mernda, Mornington and Point Cook, won't run. How does this make any sense? https://t.co/QYE7FWNm0r

The story included this truly ludicrous response from the State Government:

Um, what? Trains and trams don’t run all night on Sundays either, but they do for New Year’s Eve.

Why would you run the Night Buses every weekend, but not on the biggest night of the year?

After they’d had some time to think about their response, PTV changed their tune to something a little more plausible: they claimed to journalists that only 50 people used Night Buses last NYE… but they also claimed that normal weekend Night Buses are “very popular”.

Let’s assume the 50 people quoted excluded the Doncaster Night Buses. If that service was used by hardly any people, then this year they wouldn’t be running four Smartbus routes to Doncaster every 15 minutes until 2am.

Doncaster aside, if Night Bus passenger numbers are low on NYE, logic would imply they’re even lower on most weekends. 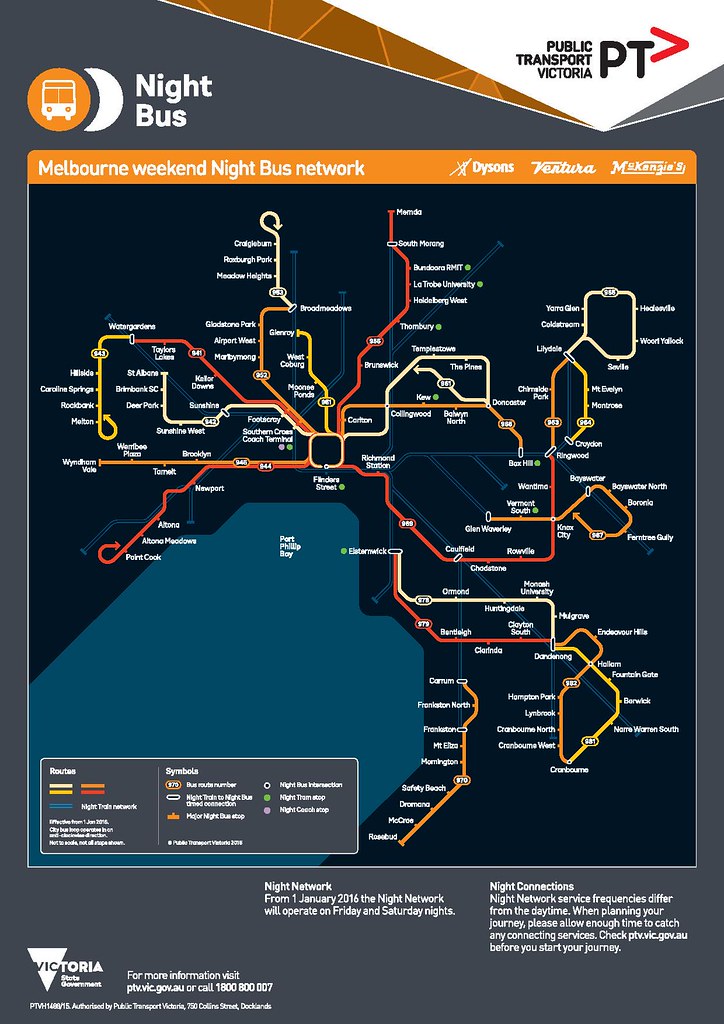 Does Night Bus need a re-design?

Most of the time, official patronage figures for Night Bus are very hard to come by.

But this claimed low patronage on NYE casts into doubt the entire Night Bus network design.

If Night Bus patronage is not reaching expectations, then authorities should review the network, which currently is completely different to daytime bus routes, and partly duplicates rail services.

There are some broader Night Network considerations, including:

On Night Buses specifically, one option would be running major routes (eg Smartbuses, or at least the busiest sections, and a few other bus routes targeted at gaps in the rest of the network) as 24 hour services on weekends and New Year’s Eve. Time them where possible to meet trains from the City.

Like the 24 hour trains and trams, 24 hour buses would be more understandable for users, and more likely to get good patronage. The current Night Bus network of different routes to daytime means someone heading out before midnight but coming back after midnight has double the work to figure out how to use the system.

(The way they are programmed into Journey Planners also seems to cause issues. Night Buses are limited pick-up, but will drop you off at any stop. This seems to be beyond the understanding of the JP algorithms.)

Keeping it simple is the key. After-midnight services should be (some of) the same routes that run in daytime, rather than a completely different network.

5 replies on “No Night Buses running for NYE”

This, along with the lack of service improvements across the network and things like the Boxing Day bus issues; is showing to me that the government is actually quite poor at understanding how and what is important in operating a functional public transport network. Running such low frequency night services while trains are laying over for long periods of time does not make a lot of sense, nor does failing to add additional metropolitan services after capacity is created through the completion of large projects (RRL etc.) – it shows that they don’t think actually providing a real service is important, but rather the ‘image’ of having trains, trams and buses all night, and having train service, whether frequencies are adequate or not. Similarly with the Metro Tunnel business case which projects services running every 20 minutes beyond West Footscray – is the end goal of the Metro Tunnel to spend billions tunneling and pouring concrete, and saying “getting it done”? Or is the goal to actually enable people to move around the city efficiently?

The scattergun approach to project selection, with some odd ones like the West Gate Tunnel, enormous blowouts to North East Link (as well as a huge scope creep), and as analysed by the Auditor-General with regard to level crossing project selection – shows to me that the government is great at spending huge amounts of taxpayers money for all sorts of projects, but that they do not have the strategic understanding of how projects should be staged and selected, and how the capital projects feed in to the overall system (as a a part of a more effective transportation network, with the core being fast and frequent service). It is good that they’re actually building a lot of things, but I do not think the methods of selection and delivery are appropriate – and we will all be footing the bill while many existing assets are heavily underutilised, despite the comparatively small marginal costs of running added services.

Could the patronage have been so “low” last year on NYE because they’re only counting those who actually touched on? With public transport free, people aren’t generally bothering to touch on. And from experience, touch on rates on Night Buses throughout the year are generally quite low anyway considering the demographics and “state” of the individuals using them.

All too often it feels like they begrudgingly run public transport because they have to, rather than seeing it as an opportunity to make people’s lives easier.

James A raised a completely good point. With free transport on NYE, how can the data be accurate at all? Or do they use some other method to measure patronage as a fair comparison? Not quite right to use myki data on a different night, and some other method on NYE.

[…] noted in a previous post, a big part of the problem is that the route structure, unlike the trams and trains, is completely […]