I described this on Twitter the other day, but I’ll expand on it here.

I was heading out in the car on Saturday afternoon.

Got in, beeped, looked behind me, slowly backed-out of my driveway.

BANG! A cyclist riding along the footpath with his dog (roughly at running pace) collided with my car.

I stopped, moved my car back into the driveway, and asked if he was okay. Thankfully he was. And his dog.

They carried on down the street, at the same speed. 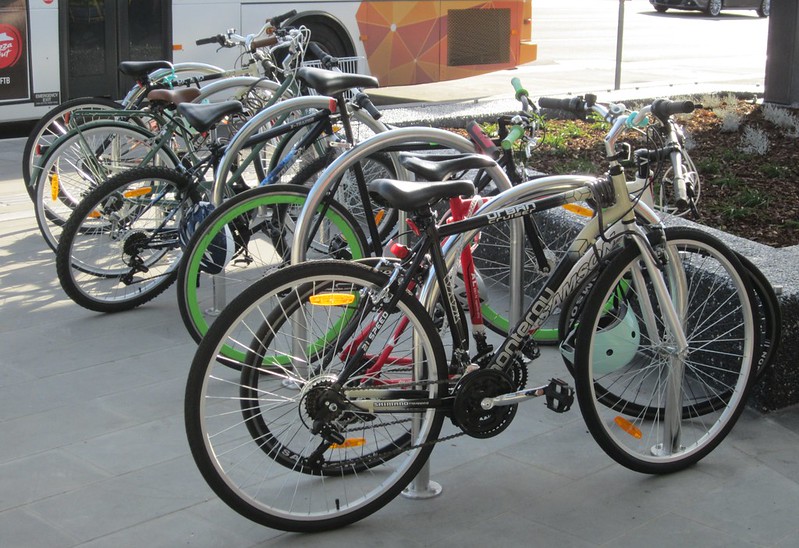 Cycling forms a vital part of the transport network, helping people travel longer distances than might be practical by walking, but without having to drive a vehicle.

Sometimes there are good reasons for cyclists to avoid riding on the road. Riding on some roads can be perilous due to driver behaviour.

Probably not on my street though. It’s fairly quiet. But what would you do if taking the dog out for a run?

In Victoria it’s completely legal to ride on the footpath for cyclists under 12, or accompanying those under 12. (Regulation 250)

(The bloke I encountered was an adult.)

The problem isn’t so much the bicycle itself, as the speed compared to other footpath users.

For a bike going at anything much above walking speed, there’s a real danger of a collision with a vehicle or a person, especially given limited visibility to/from driveways and garden paths — in fact years ago one of my sons was hit by a cyclist while coming out of a front garden gate.

And yet some cyclists will persist in riding at speed along footpaths. Really not a good idea.

What could I have done?

My fence isn’t high, but the speed he was going, I’d have little chance of spotting him even if driving out forwards.

And he obviously didn’t spot me, and either didn’t hear the beep, or didn’t realise where it came from, or couldn’t stop in time.

There is one thing I could do: my driveway is short enough that I could have a quick look up and down the footpath before I get in the car. It might help.

12 replies on “Cyclists on the footpath”

Sight distance is the issue in this case, and his speed was too high for you to do anything about it. You are allowed to drive (or reverse) a car from a property to the street, across a footpath, and it is your responsibility to make sure you don’t collide with pedestrians. BUT that rule implies the assumption that these pedestrians are travelling at walking pace, which allows you time to see them as you are about to move into their path, and allows both of you the room to stop to avoid a collision. When one party (the car or the footpath user) ruins this by travelling too fast, a collision is going to happen.

So you’re right – it isn’t about bikes on footpaths so much as the speed of bikes (or anyone) on footpaths.

Well, I don’t think there’s anything much you could have done, really. If anything, the cyclist should have either left his bike or his dog at home.

I used to ride my bike in Melbourne as per my daily commute as well, and I still occasionally ride my bike to work in Sydney (though the majority of my commute are either walking or riding the bus). I’ve seen a fair amount of cases where cyclists and skateboarders whiz past me at a good speed, on a busy footpath like the one on Parramatta Road in Ultimo. Sure, I wouldn’t want to ride on that road either, but it makes me wonder whether they couldn’t push their bike, take back streets, or even ride slower.

Further, road rule 301 makes it an offence to “walk” (lead) a dog from a bicycle.

i don’t have an issue with a cyclist and his dog. I DO have an issue with a lot of cyclists and their expectation that everyone has to move for them, even on shared pathways. It really is time for cyclists to be held responsible for their own actions as well. Riding 3 and 4 abreast is NOT legal but do the constabulary care…NO!
Until that happens it will be everyone else’s responsibility to watch out for them!

I often see bikes being ridden on the footpath even with a bike lane available in the street next to it. Crowded Chapel St. comes to mind. I am aware of the under 12 rider and guardian rule but many riders seem not to be or they don’t care. The bike lanes are not the greatest for riders either as they do seem to end at random places even on busy streets. Then a cyclist has to enter traffic or find another “safer” place to continue which may be the footpath.

On a related note the new yellow O Bikes seem to be strewn about every place in Melbourne often on a footpath. Many are dirty or broken (usually the flimsy looking rear fender/mudguard) meaning that no one would choose to ride them away and there they will sit until someone eventually comes to take them away. They can’t easily be rolled away as the wheel is usually locked. I even saw a news clip of a pile of these bikes freshly pulled from the Yarra river. This business model seems very poorly thought out as nothing encourages/forces people to park them neatly and securely in one place. The parking stations with the blue bikes is a much better plan as it forces people to put the bike in a proper place or pay more.

My understanding is that it is safer to drive out forwards out of a driveway, than to reverse in, and that reversing in is safer than reversing out.

Daniel
It would be good if everyone just obeyed the law.
Was there any damage to your car? Did the cyclist take a look and offer to pay for any damage?
Yep, lucky non one hurt

Daniel, of course I didn’t witness the collision but I think you probably could have avoided it, regardless of the cyclist’s speed.

You made a choice to drive into your property facing forwards, and therefore you had to back out into the street. This is inherently less safe: it’s impossible to have the same situational awareness backing into a street as when you drive forwards.

You say the collision would have occurred even if you had been driving forwards, but who’s to say? We all have a tendency to blame the other party in such a situation, but it doesn’t teach us anything for next time.

It could just as easily have been a child cycling or running, or a dog, or both. The driver entering or exiting a driveway must give way to anyone coming down the street, and you are not in a position to do that safely or reliably if you back out into the street. Not even with a rear parking camera if you have one, because that doesn’t provide any peripheral vision.

Next time you arrive back home, reverse into your driveway. It’ll feel unfamiliar, maybe a bit scary, but you’ll get used to it in no time. It’s much safer for everyone.

You mention that the cyclist (and dog) were travelling roughly at running pace. And that the issue is the speed differential between cyclists and pedestrians.

@Roger, no visible damage to my car, though at the time I didn’t think to look – I was far more concerned that he’d been hurt.

@Backwards: It’s *possible* that if coming out forwards I might have seen him in time (and vice versa) to avoid a collision, but I doubt it.

Backing the car in to enable exiting forwards is a possibility, though brings with it other hazards. Visibility can be poor due to other parked cars, for instance, and it wouldn’t be practical in a busy road. That said, I agree overall it’s probably safer.

@Albert3801, To my mind, someone running (and I used to do a bit of this myself, though not much recently) is far more likely to be able to stop or change course if a hazard emerges (including hearing and reacting to the beep), than a cyclist travelling at a similar speed — let alone with a dog.

I’ll keep just checking the footpath before I get in the car.

By the way, regulation 74 details the obligations of the motorist here. Interestingly it specifies that the driver must give way to any vehicle or pedestrian on any road related area that the driver crosses to enter the road — the definition of “pedestrian” excludes cyclists; they would be counted as a vehicle.

Which seems to indicate drivers still need to give way to them – even if they’re not meant to be there!

Really interesting as nearly every day I ride my bike with my dog on the footpath. So far I’ve never had an accident (touch-wood) but I’m very weary of vehicles exiting driveways (but its much nicer than getting doored).

I would love not to have to ride on the footpaths but there is little or no alternative in Melbourne as riding on the road (even with a bike lane) has a much higher risk of injury (I can provide three examples of colleagues that have been killed or permanently injured recently while cycling in bike lanes) and I’m much more willing to take the risk with a fine than injury. That said, I note that there is a way out with riding on a footpath and that is having a medical certificate demonstrating that you are unable to ride on the road – i always wonder if this is something that I could get retrospectively if i did get fined??

Overseas the cycling issue is addressed by a higher rate of every day bike riders (i like to call them skirt cyclists – as opposed to Mamils) and so drivers have a much higher awareness of bikes (when living in China i would ride every day and never felt an issues at all either by drivers or pedestrians). It’s just a shame our roads are so designed for fast cars.