A short break from posting my holiday blogs…

From today, smoking bans have been extended to include the entrances to most government buildings, as well as outdoor dining areas.

This is all good. We’re way behind the other states on this. It’s about time non-smokers, who make up the vast majority of the population, had the right to more smoke-free places, including while eating.

The changes also mean e-cigarettes are included in smoking bans.

This is also welcome. Until now, as I understand it, e-cigarettes were not actually banned on and around public transport.

Vapers like to claim it’s harmless. I’m not sure I believe that, but regardless, I still don’t want the fumes in my face. 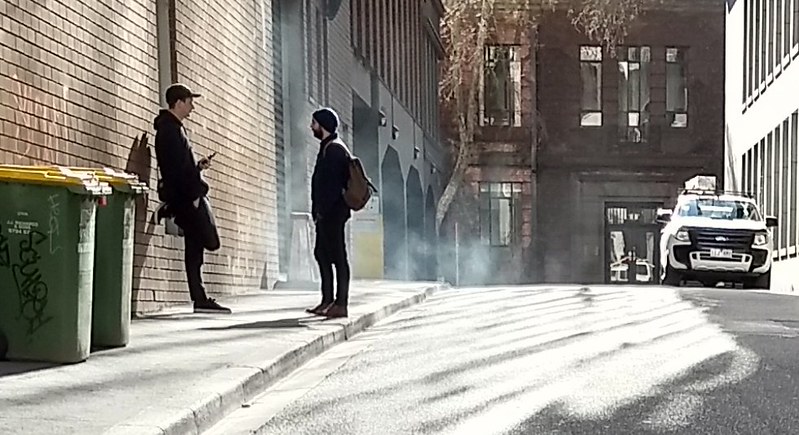 Until 2014, smoking was still permitted in some parts of railway stations, and around tram and bus shelters.

It was only in 2007 that smoking was banned in pubs. It seems outlandish now, but as late as 2001, you could smoke in restaurants.

At one office job I worked at in 1998, people still smoked in the courtyard entrance, and I was told it had only been a couple of years earlier that smoking had been banned inside the office.

To coin a phrase, smokers are a dying breed. In 2015 it was down to 11.9% of Victorians, and hopefully it’ll continue to drop as it’s banned in more places.

Smoke blows around easily, and sometimes it’s difficult to walk along city streets without breathing it in. So I hope the bans will continue to spread. It’s good to see progress.

Adults may have the right to smoke, but increasingly they can’t inflict it on others. And that’s a good thing.

15 replies on “Good to see smoking bans have been extended”

I’d love to see it being banned entirely in the city with dedicated “smoking rooms” which are relatively isolated from anything or anyone where possible. I’m sick of getting out of Melbourne Central and holding my breath multiple times as I pass smokers.

I remember when people walked around Coles or Myer, Myers then, smoking away. I think and hope cigarette ash is sterile, because plenty of it was dropped on food and clothing. I remember my parents and uncle all smoking in a closed car. We never noticed. I remember people smoking on trams. I never really smelt cigarette smoke until about twenty years ago. It was part of life. I think we also have to thank smokers for their unfortunate self destructive habit, as we now have all these great purpose built outdoor dining spaces for smokers where they were put out to, to indulge. I could get to places quickly in the car, get a seat on a train or tram and a dead city centre on a Sunday meant there was a devotion to being with family. How the world has changed.

Unfortunately I expect what will likely happen in pubs is (as has happened interstate), smoking will not be banned in outdoor areas, but eating will be.

Evan is entirely right. The way that this has been constructed, in pubs and clubs you’re likely to see *eating* banned outside rather than smoking. Yeah, I know. Put down the parma…

Smokers who drink are among the best customers of pubs and clubs, and these places have no intention of telling them to stay home. The indoor smoking bans had a large impact on the alcohol industry, and they’re determined not to repeat it. I suspect this is also one reason they haven’t made a huge fuss – this could have been a lot worse.

Give it another 5-10 years and a corresponding drop in smoking, and they’ll tighten the laws again.

@Michael, I have yet to be forced to breath in fumes from elicit drugs while eating outdoors or walking down the street.

No mention of MEL airport?

Is it a government building or a privatised monopoly?

I agree with Reuben Silveira on smoking rooms. They have them at Dubai Airport but smoking rooms are politically incorrect in AUS – so people stand outside the terminal and smoke. How the heck is that a better “solution” for a non-smoker like me?

Legalise smoking rooms, get the smokers in there and I will breathe easier! Stupid government.

Interesting how the old Greek Men in Oakleigh’s Eaton Street Mall, a place in the memories of my childhood, are to be catered for with the banning of food being served outside so they can smoke, yet similar old Greek men from Prahran and Prahran East who gather at Pran Central, long ago gave up their smoking and sit and chat smoke free indoors about Greek politics and who knows what, perhaps gay marriage and Turnbull.

@Jacob, is there any legal barrier to MEL having a smoking room? Apparently Brisbane has a smoking area. Agree, better to put them into a dedicated area than have smokers smogging up the entrances.

My concern with smoking rooms is that the smokers will smell even worse when they emerge and then move/sit next to us non-smokers who have a sense of smell. I think I’d rather they smoked outdoors.

Second hand vaping is in no way unpleasant in my experience, even indoors.

What about adult-only smoking bars/restaurants? I’ve been frequenting smoking bars for meals since Georgia (US) institued their smoking ban in the mid 1990’s.
Fortunately for me, there’s a bar with descent food as close to my house as other restaurants.

The best thing about smoking establishments….. no kids. There’s nothing like a 1yo baby for ruining everyone’s dinner.

Stine, people have to work in those places and they don’t have the choice of smoking or not, which is why they were banned.

Georgia also has 21% of adults smoking, well above Victoria’s 13%. Laws designed to reduce a practice which kills half of its users are working.

You’re incorrect. Georgia is a right-to-work state, that means two things: 1) you can quit and get a new job any time you like, and 2) you can be terminated for any reason whatsoever. No-one has to work anywhere they don’t want to. I think the bar only has 3 non-smoking employees. There are over 20 restaurants/bars in a 1-mile radius, and only two of them allow smoking.

I’m not glad that the 50% it kills are in Victoria, but I’m a smoker (since 1983) and I don’t care. An acquantence’s 93 y.o. aunt refused to let her family put her in a nursing home because she knew that she wouldn’t be able to continue smoking two packs/day, as she had done for over 75 years. Face it, genetics is the largest factor, since the longer humans live, the stranger (in every way) diseases occur trying to reverse the trend.

“All indoor smoking rooms at Shanghai Hongqiao Airport and Shanghai Pudong Airport will be closed and passengers at both airports will be directed to use designated outdoor smoking areas.”

“Britain’s airport smoking rooms fell victim to a 2006 ban on lighting up in public places.”

No idea what happens in Shanghai now, maybe they smoke at the entrance like people do at MEL airport – which I think is pathetic.

@Stine, there might not be a legal barrier to quitting your job… but I don’t think that was George’s point. If economic factors mean people can’t quit, then they’re stuck with breathing in other people’s smoke.

If you want to smoke, that’s your right. Causing other people to have to breathe it in is quite another matter.

@Jacob, as of last week, Singapore definitely had smoking rooms at the airport. I waited for a plane nearby to one. If you were within a few metres of the door you might get a whiff as people went in and out, but otherwise it wasn’t noticeable.