Our second last day on London. While the others had breakfast, I ducked out of the flat to try and find a post office, as I’d neglected to give one of my relatives a souvineer from Australia, and thought it best to mail it while we were still in England.

The nearest post office was embedded in a kind of supermarket/newsagent, a not unfamiliar scenario that occurs in Australia, but it did throw me somewhat that I had to buy the envelope first, then buy the stamps separately. Okay, whatever.

By finding the post office, down the high street in the direction we hadn’t explored, I also discovered the reason we’d seen so many police vehicles screaming through the streets wasn’t that Chiswick is a deadly crime-infested suburb, it’s just that down there was where the police station was.

We wouldn’t be making it to Birmingham to visit old friends Ian and Louise, so they had come to London to stay for a couple of days – a stone’s throw from where we were staying in Chiswick.

Unbelievably, I’ve known Ian for almost 20 years, having met him via blogging (or to be precise, posting to Usenet) my 1998 trip to England, Scotland, Belgium and Holland. 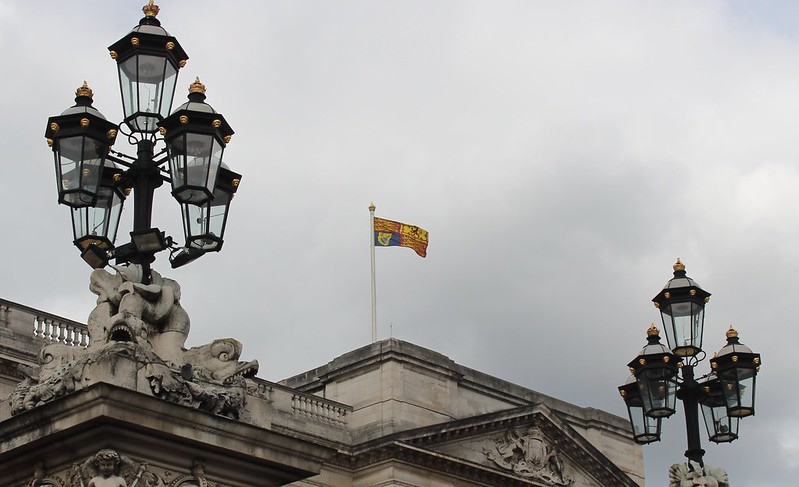 So after breakfast, we met up with them at Turnham Green tube station and we all hopped on a train towards central London, alighting at Victoria and walking up towards Buckingham Palace. The flag was up. They were home.

Crowds were gathering for the Changing of the Guard, a grand spectacle indeed, even if it’s just a glorified shift change.

There were plenty of police around, and I noticed them eyeing off one bloke in the crowd who had brought a large suitcase with him. Without being aggressive, they told him he couldn’t stay here with it, and moved him on. Given the security situation, it’s hardly surprising they wouldn’t want him hanging about in a big crowd. 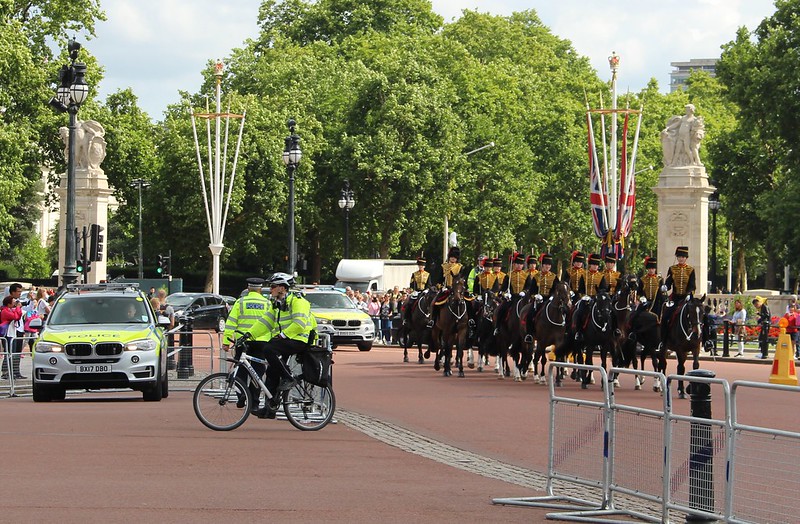 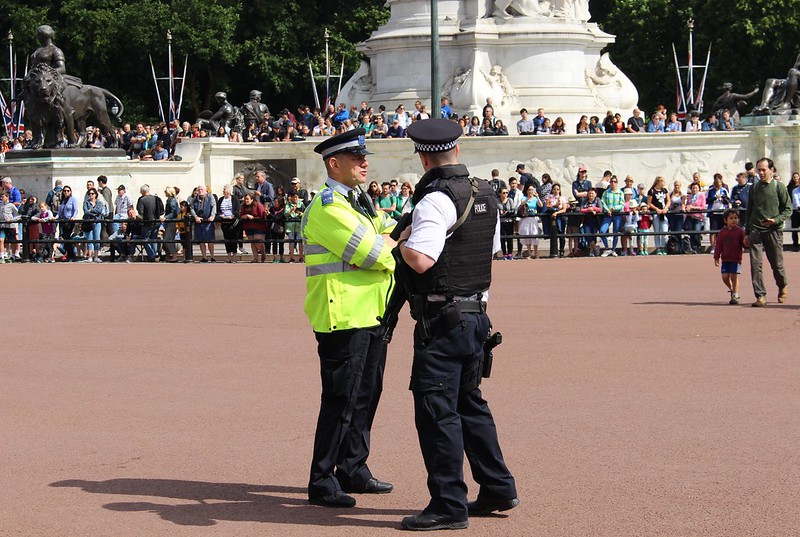 A community support policeman (I don’t quite understand why they have the role, but they seem to have limited duties, in a similar way to Victorian Protective Service Officers) was doing both crowd control and running commentary, which was handy, as he knew exactly when and where and in which direction the next soldiers would be marching at each stage of the ceremony. 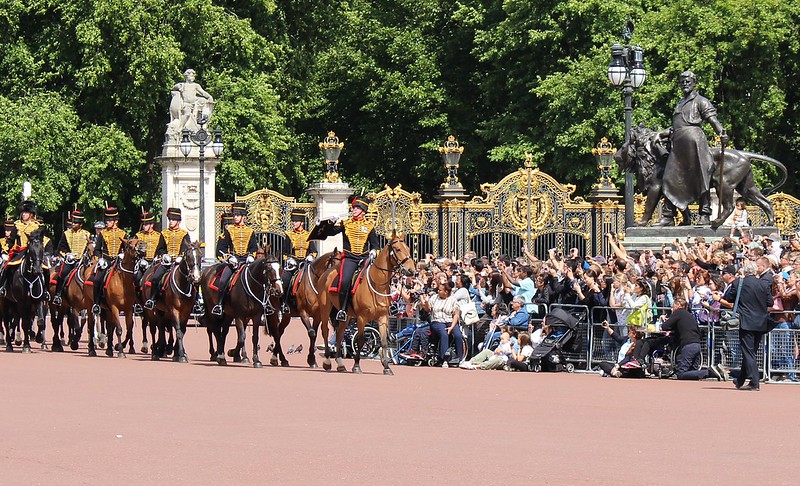 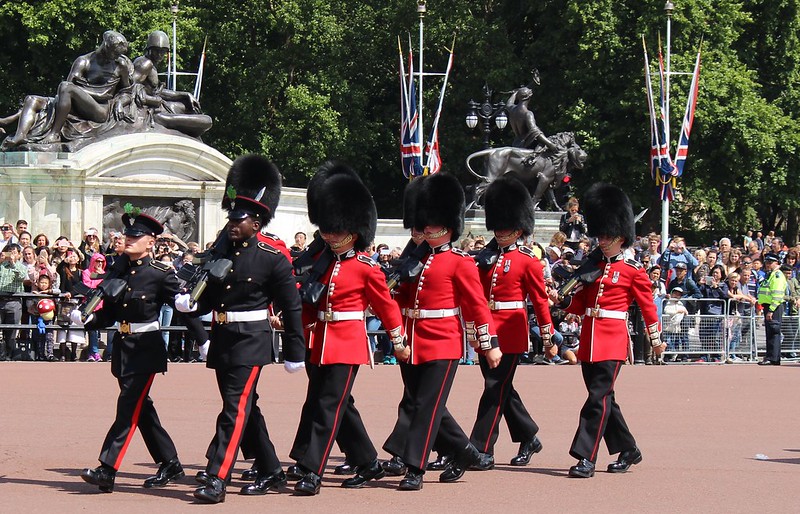 The sun was beating down, but watching it was proof that nobody does ceremony like the Brits.

One minor hiccup – a mounted policewoman had to get off her horse at one point, and couldn’t get back up on it. She brought the horse over to us in the crowd and climbed up the fence to get back on, giving us a close equine encounter. 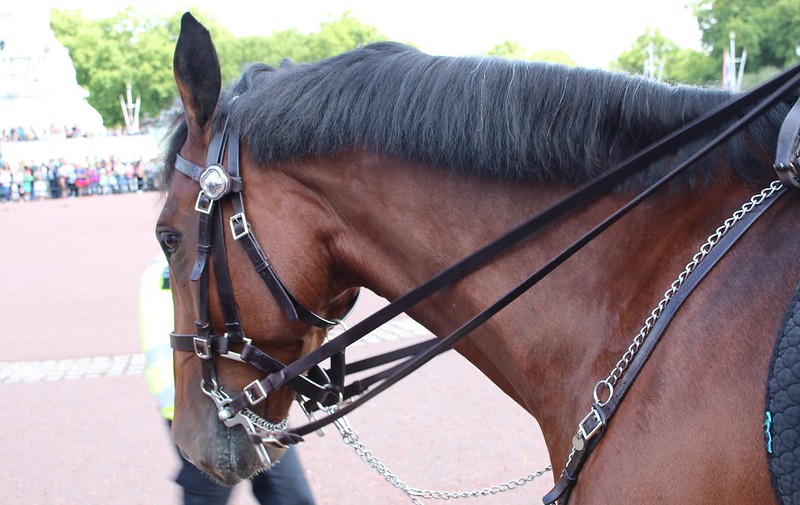 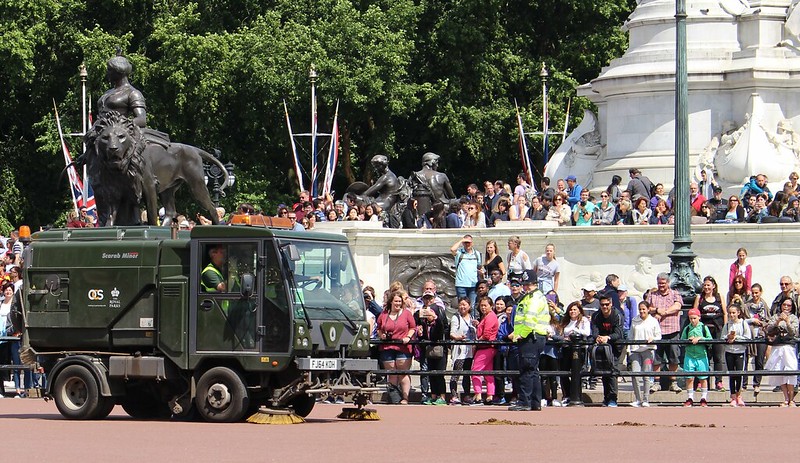 When it was finished, the Queen’s Own Royal Poo Cleaning Truck rolled through, and the crowds dispersed. 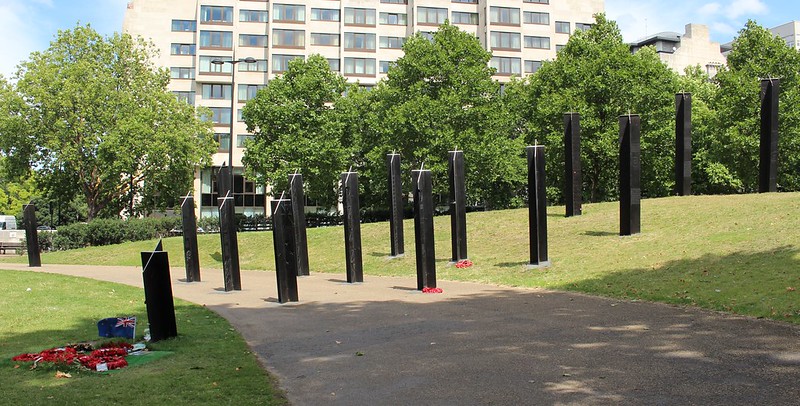 We headed up towards Hyde Park Corner, and up towards the war memorials, including those for NZ and Australia. The latter is made up of granite slabs inscribed with thousands of names of towns where Australian soldiers were born, with larger letters forming the names of battles. 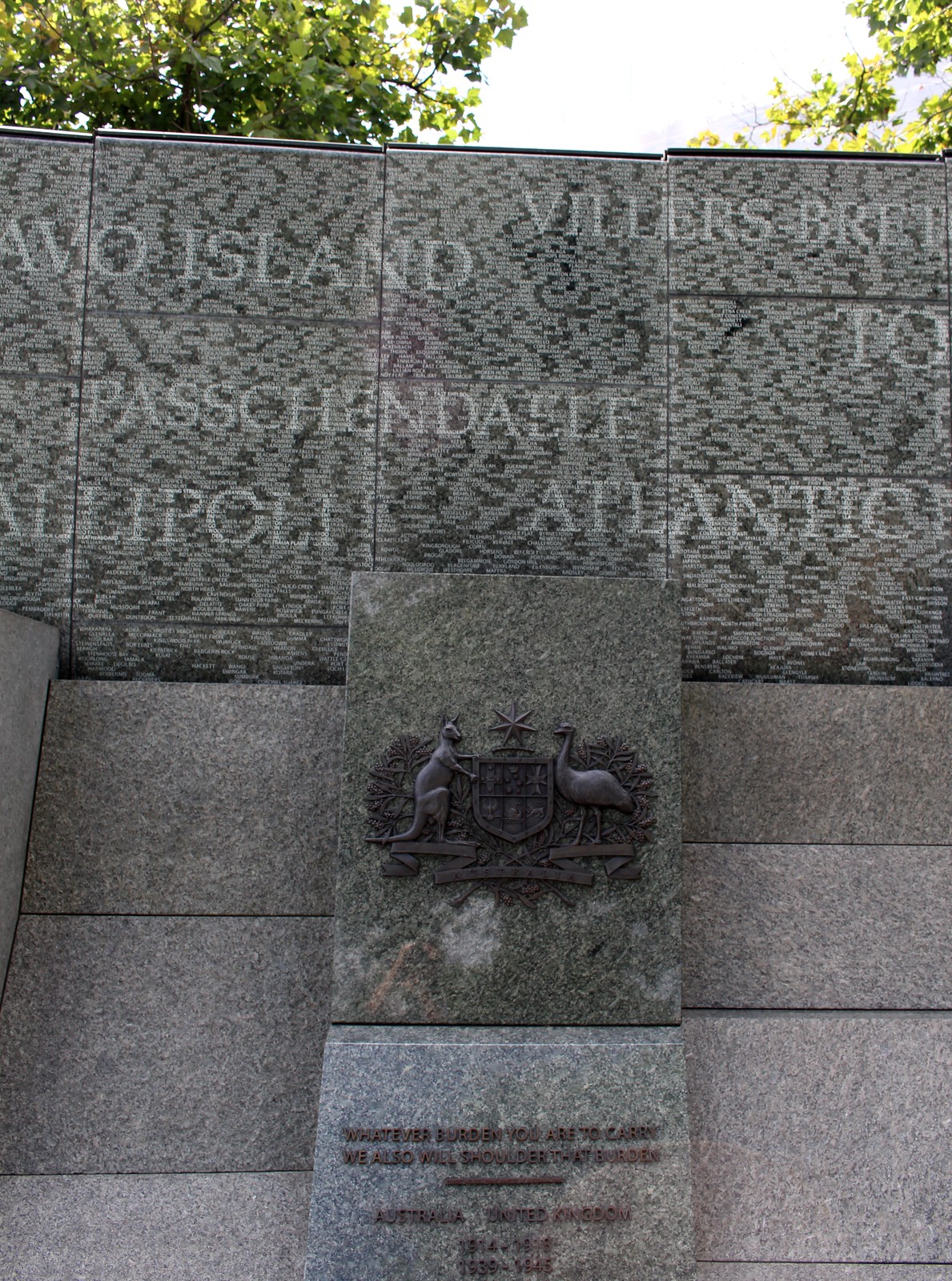 In the hustle of bustle of busy London, it was good to stop and pause and reflect.

We found a nearby bus stop. Ian, being a tour guide and transport nerd, would give us a quick tour of central London by bus. It’s much larger than somewhere like Melbourne’s central business district, which you can walk across in about 20 minutes.

One thing that’s notable is that London buses are still using canvas destination rolls, not digital LEDs as seen in many parts of the world (including Melbourne). Ian tells me that’s a deliberate decision from Transport For London, who believe they are more readable. They’re right of course, though it comes at a cost. More flexible LEDs are catching up; the resolution has improved a lot in recent years. 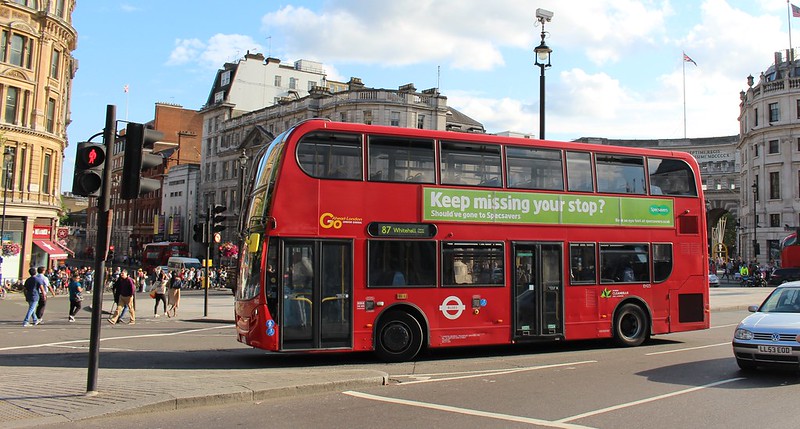 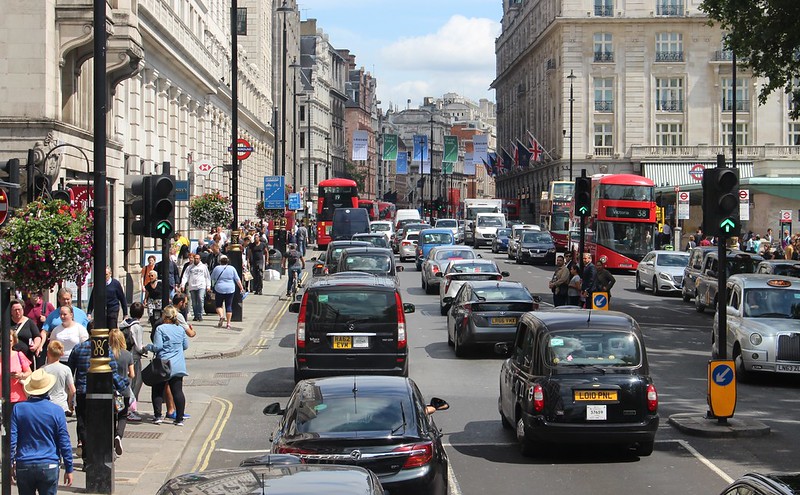 The bus network, especially in central London, is a myriad of routes, and with a lack of a grid street pattern as in central Melbourne, it’s quite confusing. The development of Google Maps and other smartphone journey planners has made it a lot easier to navigate — though Ian knew precisely where he was going without having to resort to an app.

We caught a number 9 bus along busy Piccadilly, past St James Palace and Trafalgar Square.

These blokes spotted along the way seemed to be doing a remake of The Plank. With more high-vis. 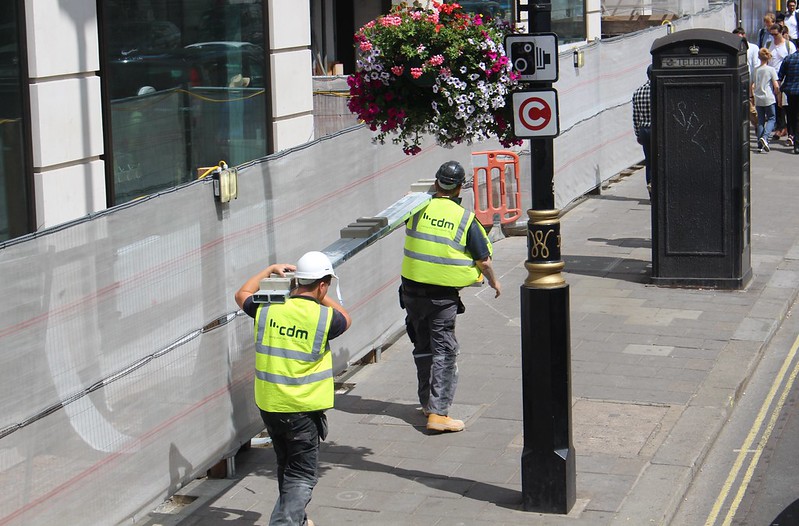 We hopped off to look for some lunch, which we found at a burger place. Next we headed back to the bus stop to catch a… wait. Ian had left his camera behind.

Cue mad panic back to the restaurant. He came back, triumphant – it had been recovered.

We thought we’d catch a number 15 bus. Why route 15? It’s the only remaining “heritage” route running the classic London Routemaster buses — not on all of its services, but some.

Unlike Melbourne’s City Circle, which is free, this is a paid route, with a conductor… of sorts. The difference is, this conductor just makes sure you’ve paid – they can’t sell you a ticket.

There’s a catch. While most of us had been happily wandering the London transport system using our credit cards, the heritage 15s only accept an actual Oyster card for fare payment.

We only discovered this when we tried to board. The conductor, spotting our credit cards in hand, looked rather pleased with himself to be able to tell us they weren’t valid for payment. We hopped off again and the bus rumbled away, almost empty. Good customer service? No. 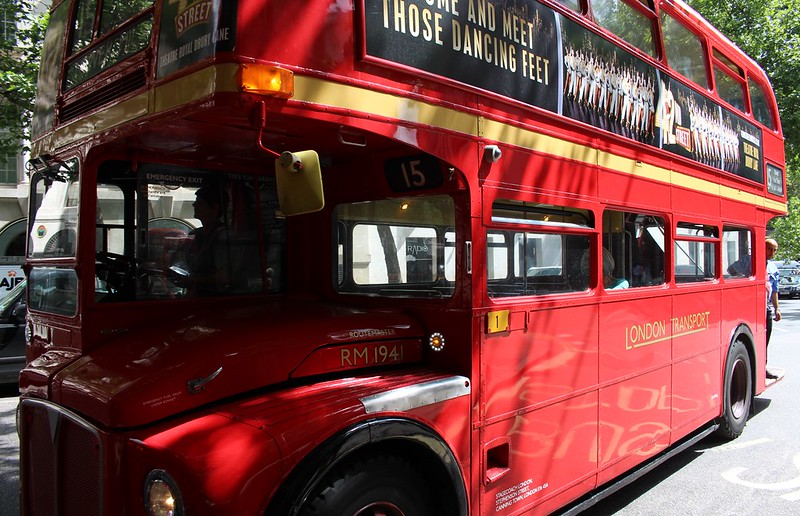 And so we downgraded to a regular bus, towards St Paul’s Cathedral.

From there we walked down towards the river, pausing at the spot where the Cybermen famously walked with the Cathedral in the background, in the classic Doctor Who story The Invasion. 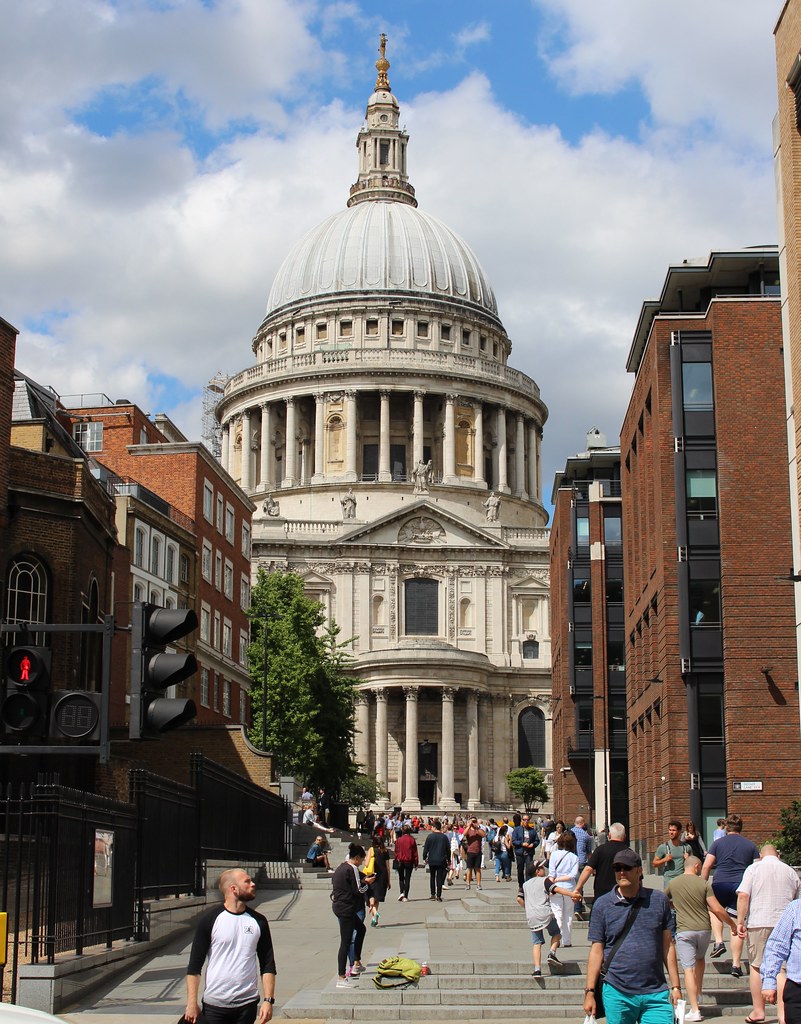 Not far away, Ian reckoned, was the manhole from the same story, that a Cyberman had come out of the drains. Alas, on this day, it was underneath a parked coach. 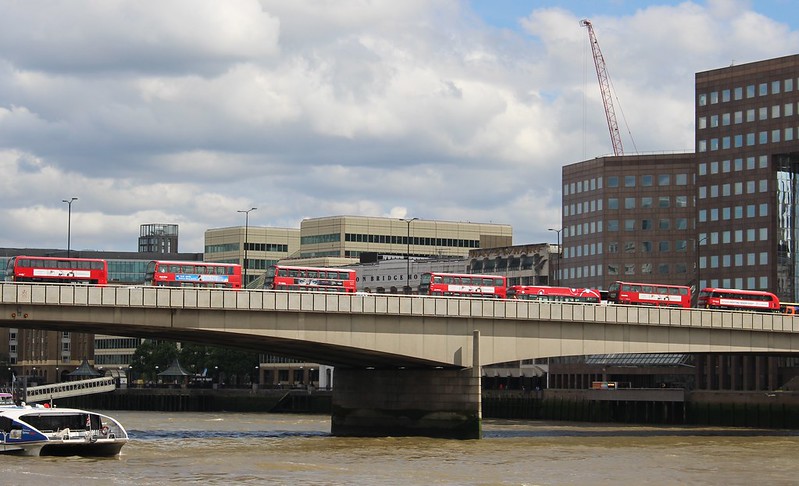 We walked down to the Millennium Bridge, which is adjacent to the Tate Modern, where we’d been the day before.

A lovely view of the river, then we headed east along the north bank, passing underneath London Bridge, and in view of Tower Bridge, doing its thing again. 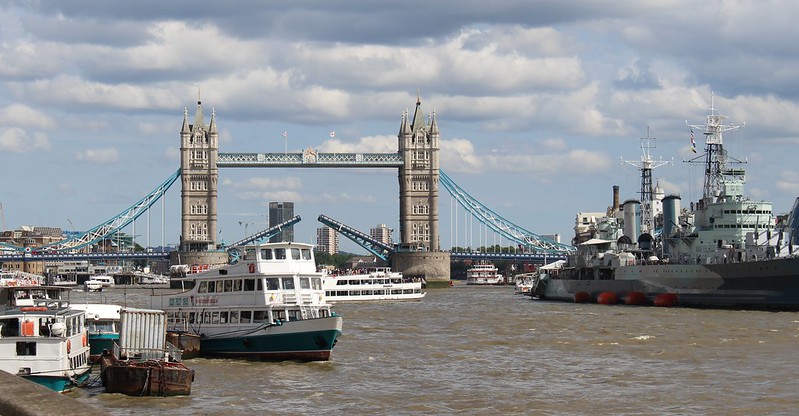 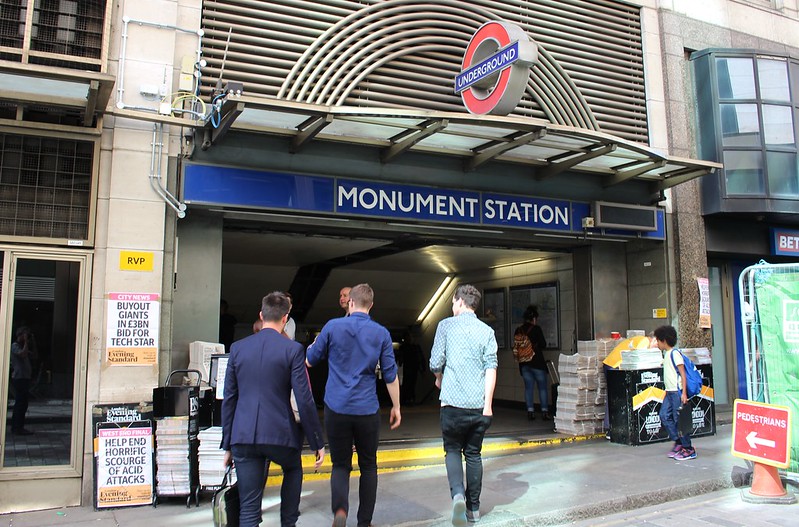 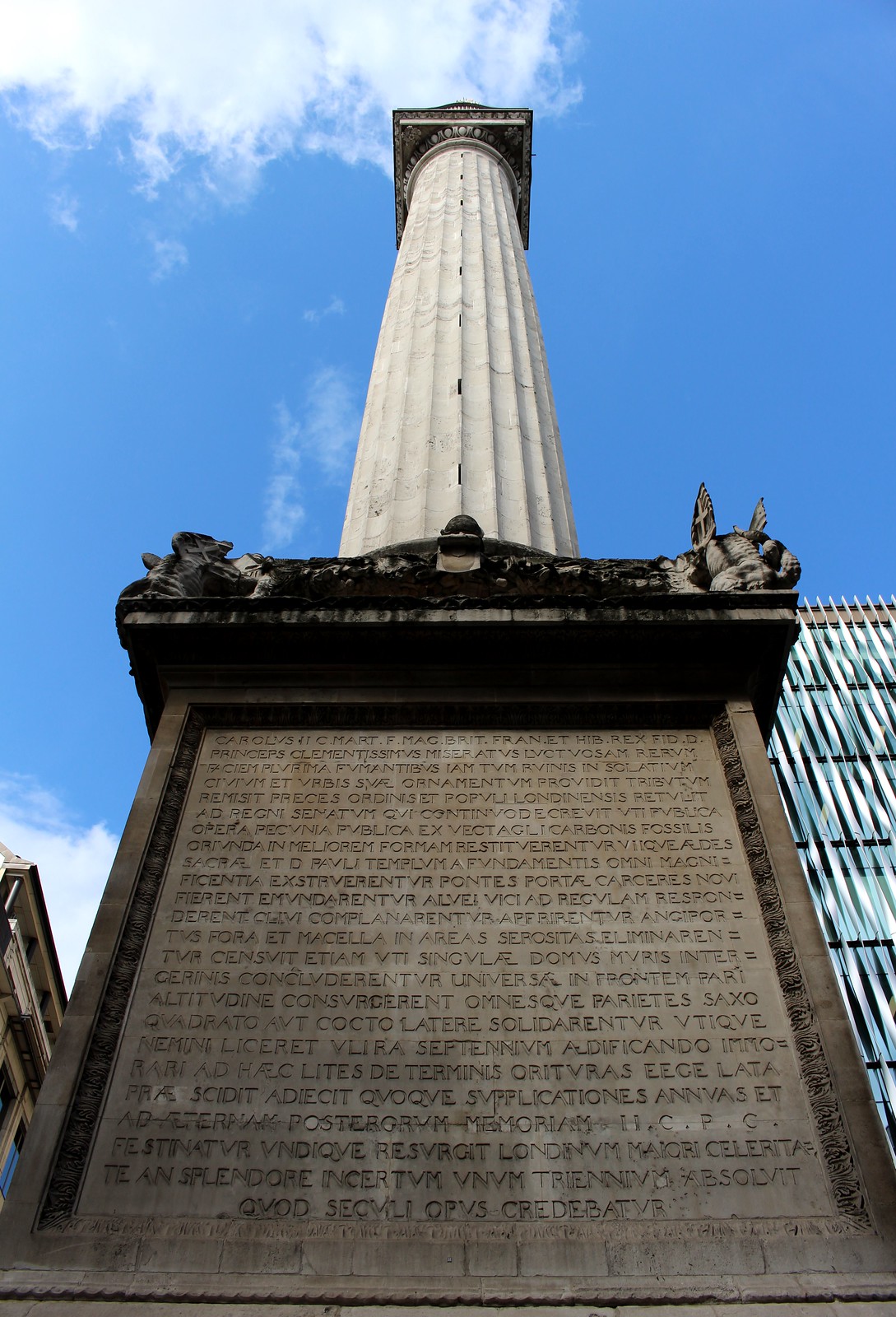 It’s possible to climb up the stairs inside it, but we decided to keep moving, Ian leading us on an exploration of some of London’s more obscure streets and laneways, with a stop along the way at Leadenhall Market for a snack. 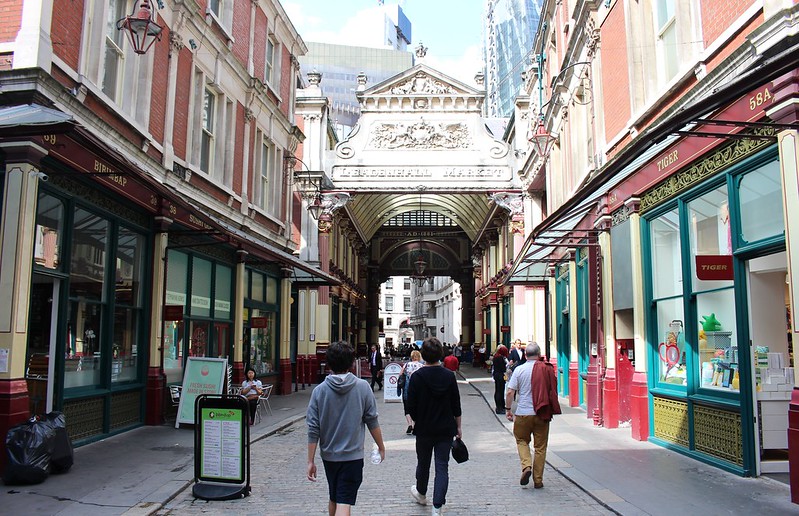 Beside Mansion House, we found a Police Post – a kind of budget-cut version of a Police Box. If it is used for time travel, hopefully it’s bigger on the inside. 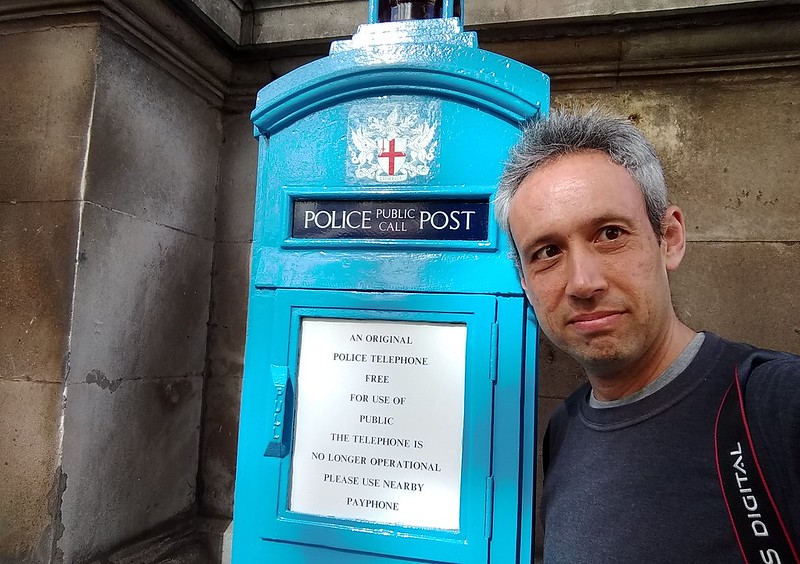 Then we headed for St Paul’s Cathedral, where the evensong was due.

As it turned out, the choir was on holiday (!) so no evensong for us, but the inside of the building is rather stunning.

The sun was still up and shining, and there were major delays on the District Line, so rather than head back towards Chiswick, we decided to head back for a proper look at Trafalgar Square – passing by Australia House along the way. 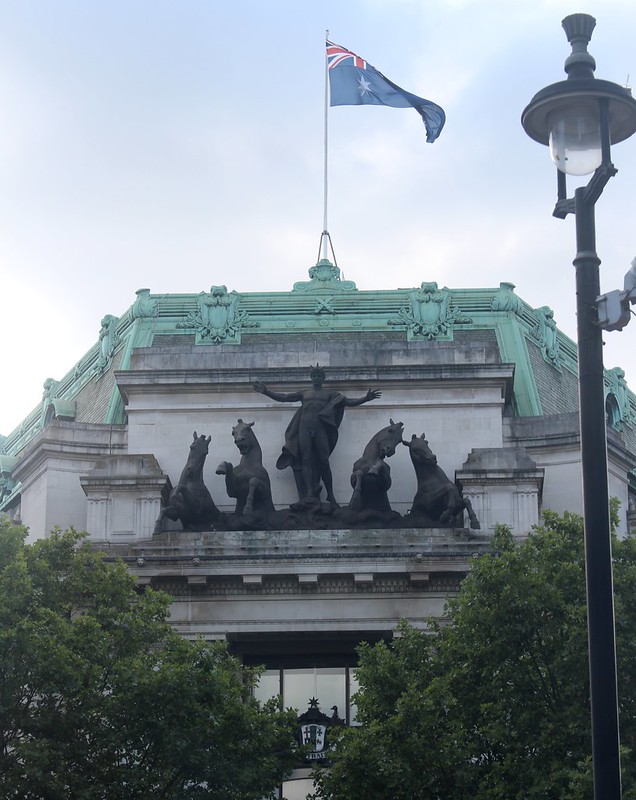 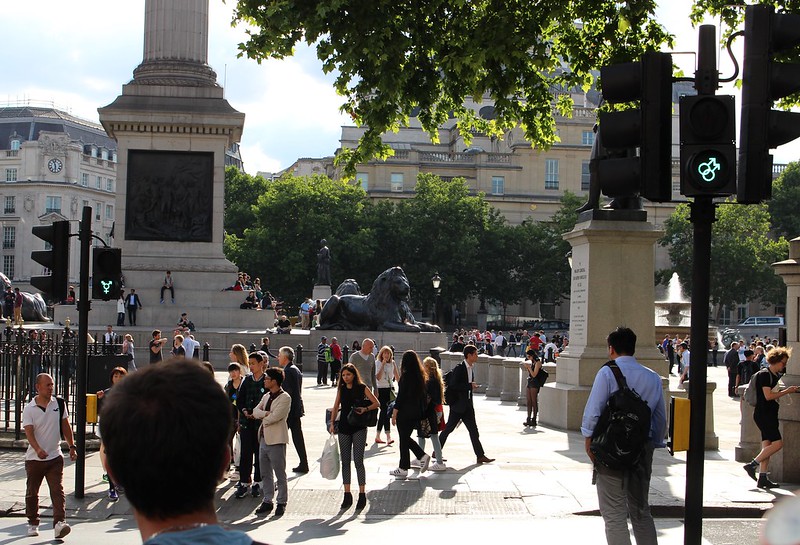 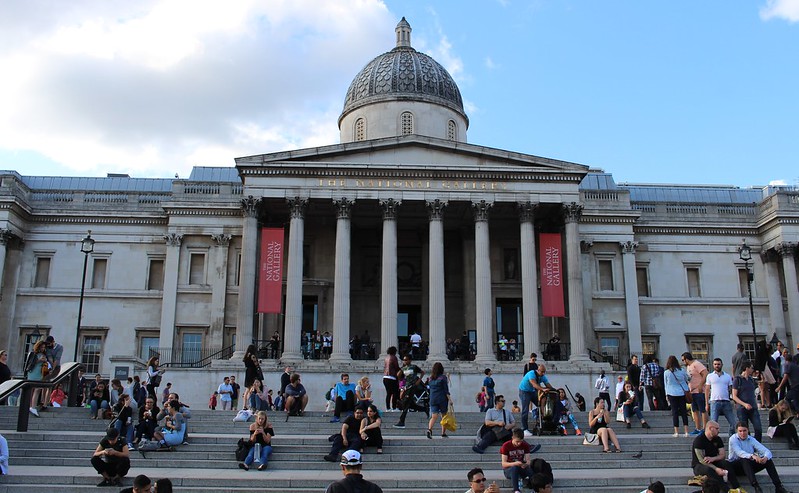 Eventually it seemed like the Tube had returned to normal, and we headed back.

Sam Schwartz’s book has a reference to tuxedos on the subway being a sign that public transport is used by the broad population, not just those who can’t afford to drive. I’ve seen the occasional person in a tuxedo on Melbourne PT, but on this occasion in London, managed to snap a photo. 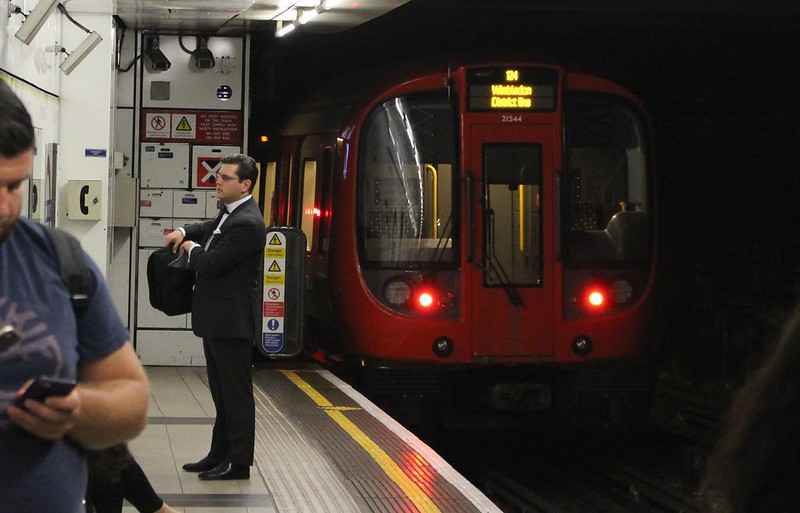 In Chiswick we found an Italian restaurant to have a great dinner and a very good chat.

We had to head back home the next day, but at least our last full day was a good one.

3 replies on “See London by bus”

Another one of those hidden posts.

[…] closer to where we wanted to be, as we had a couple of specific shops in mind. As I’d learnt the day before, to the outsider, the central London bus network is confusing mess of […]

Re the bus blinds, I don’t recall how I came across this fascinating video about how they are currently made: https://www.youtube.com/watch?v=xgCay4OBjvA

(Also ‘hidden’ for me as the backdating means it is too old to show up in the rss feed, caught up via the thread on twitter)