Monday! Our last full day in Brussels, and also a day when, generally, most museums in Belgium are closed.

It was raining in the morning for the first time on the holiday, apart from some drizzle in Penzance.

We got a little wet walking down to the Metro, and decided to use the closer station that required changing trams/trains along our journey. Again, this is no hassle because all the services run about every 5 minutes. 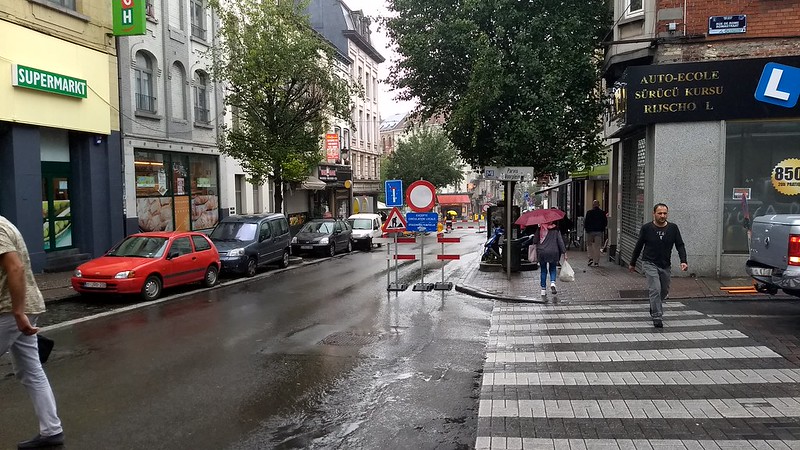 A benefit of changing trains at Porte de Hal: spotting this interesting sculpture. 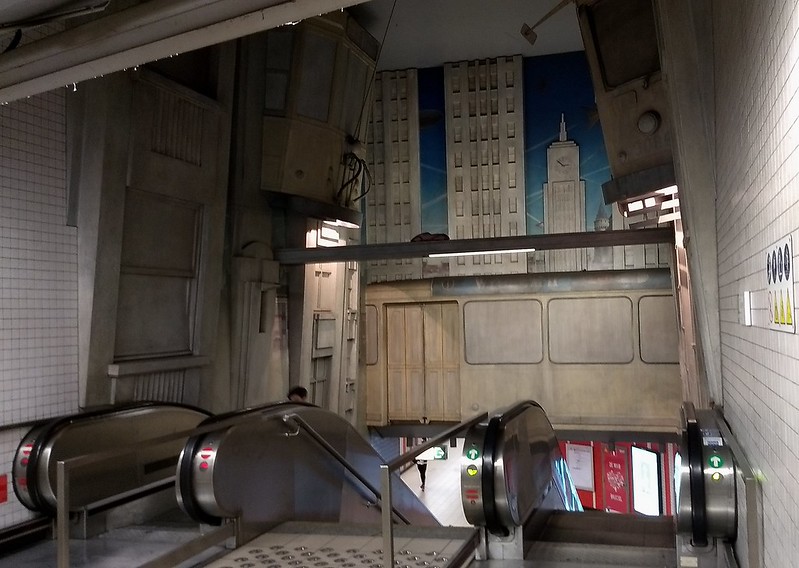 We caught the Metro to a station called Simonis. Happily it had almost stopped raining, and we walked up through the Parc Elisabeth up to the National Basilica.

It looked like the park hosted civic events from time to time, and there were concrete blocks of the type distributed and derided around central Melbourne – pretty ugly, but presumably effective safety barriers to prevent vehicle access. 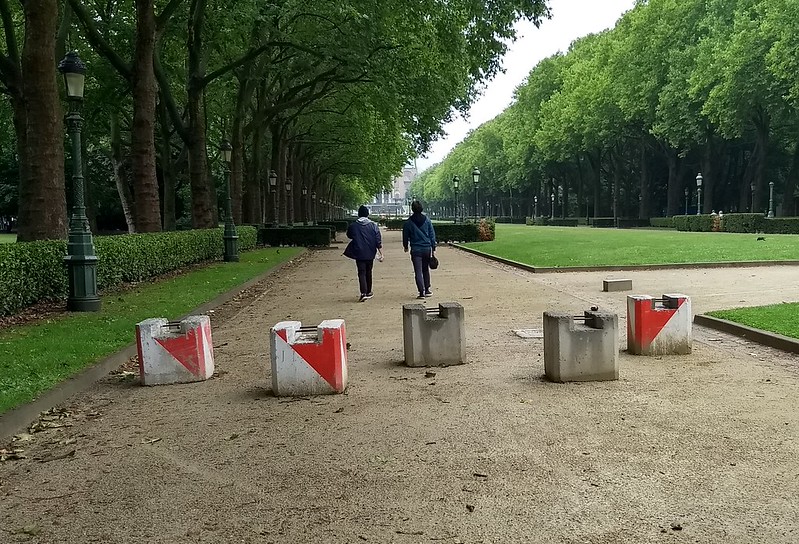 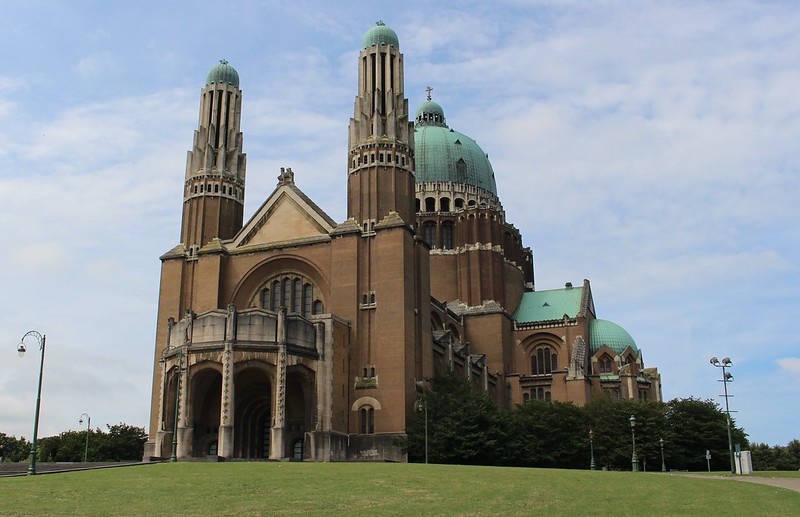 We’d come to the National Basilica for the panoramic view from the tower, but the building itself is most impressive; a massive art deco church that took over 60 years to build, last century.

There weren’t many people around. A few staff inside the building keeping busy with cleaning and maintenance. Admittance to the lift/stairs to the tower was via a ticket machine and a gate – something I’ve not seen in a church before.

You could opt for lifts or steps. I decided to opt for the steps – all the way up. Getting to the mezzanine was a cinch. It had an informative display about the protracted building of the complex.

Then the main climb up to the viewing deck. It was good exercise, but let’s just say that completely took it out of me by the time I reached the top. Everyone else wisely took the lift.

But the climb was worth it for the view, which was terrific. It takes a good little while to make your way around, and even though the Basilica isn’t in central Brussels, there’s still plenty to see. 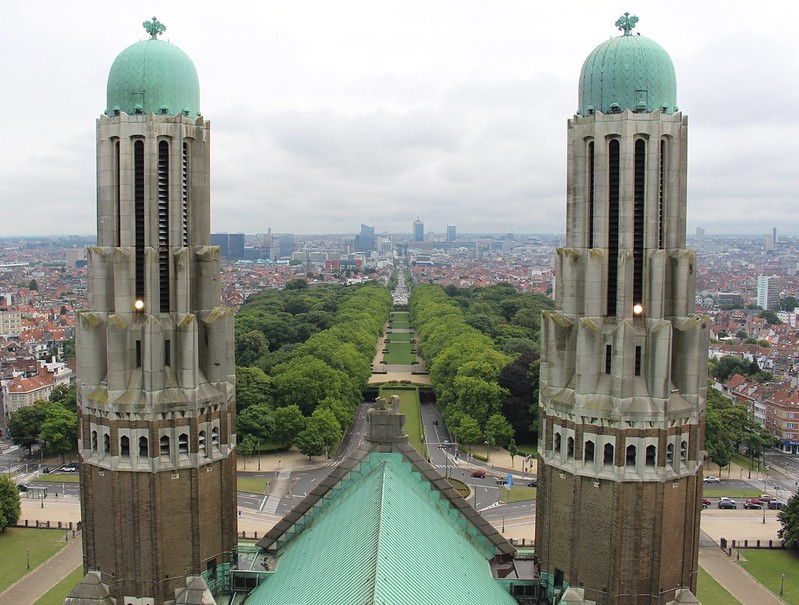 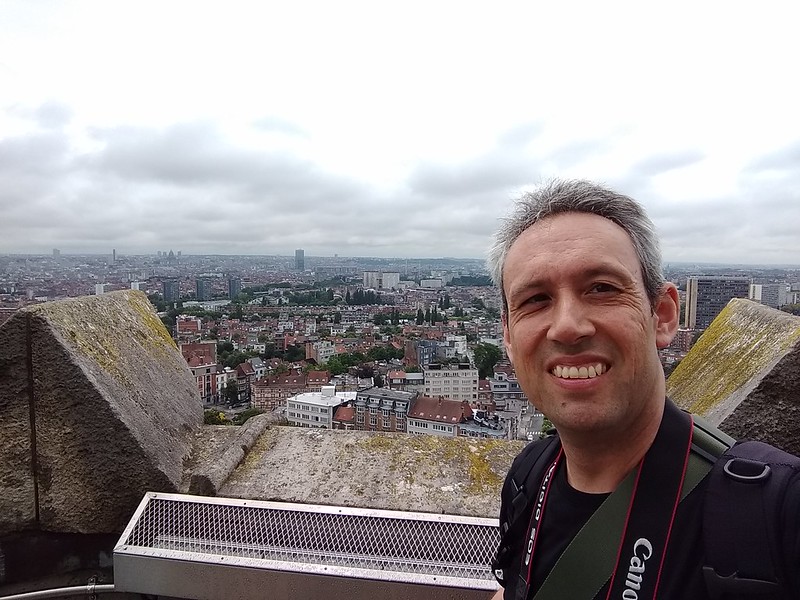 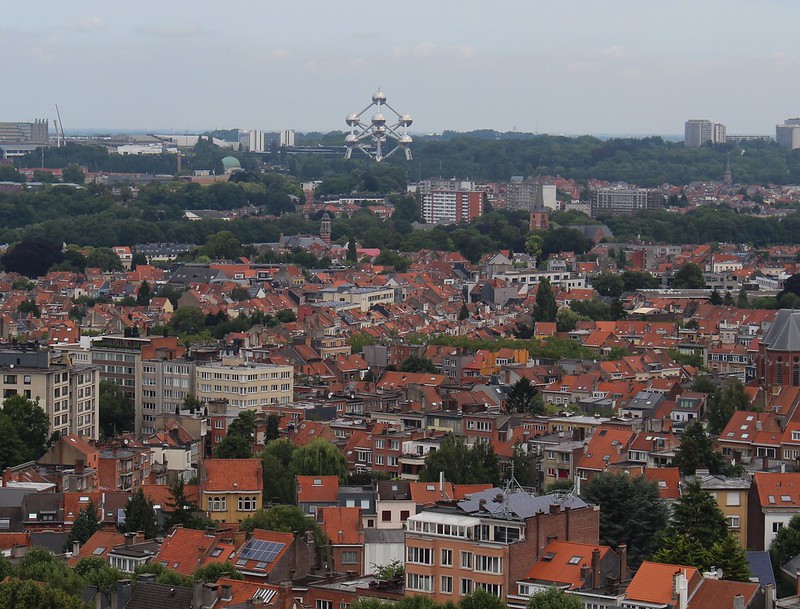 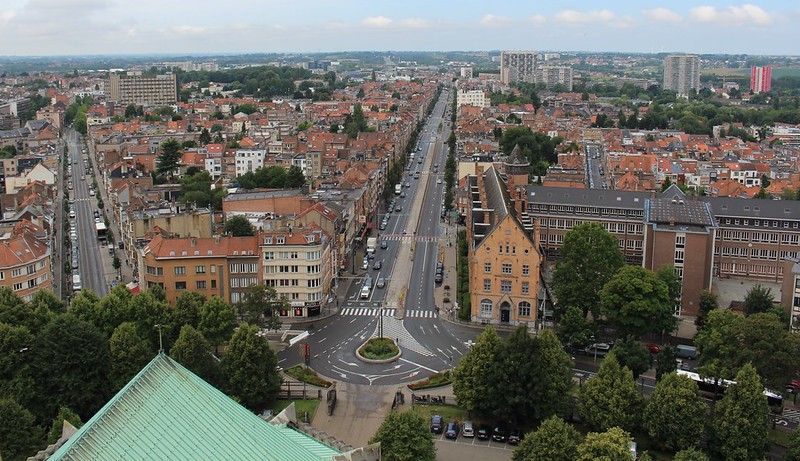 One for the transport nerds: this bus lane in the middle of the road appears to flow in the peak direction. I assume no stops along this stretch, and it’s only intended for buses to bypass a specific congested section of road. 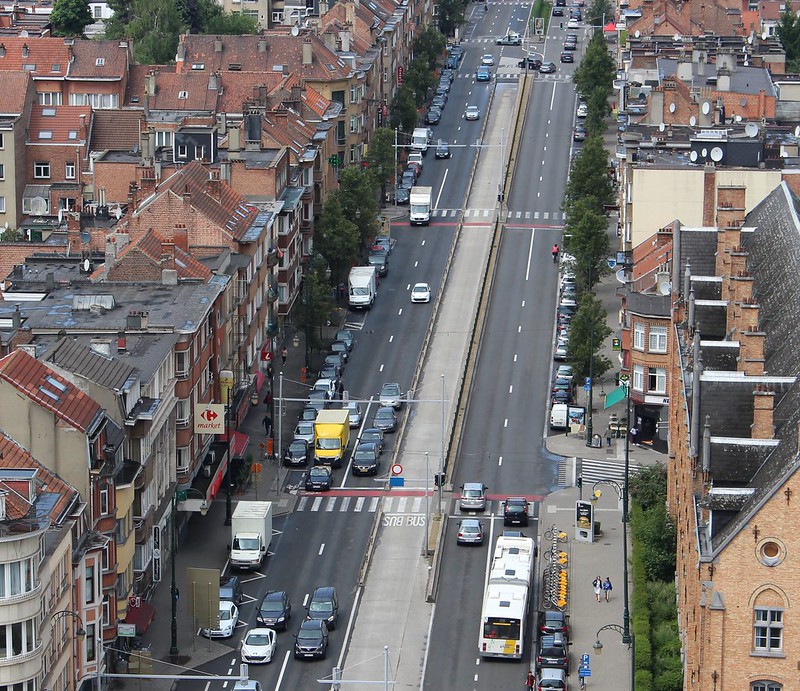 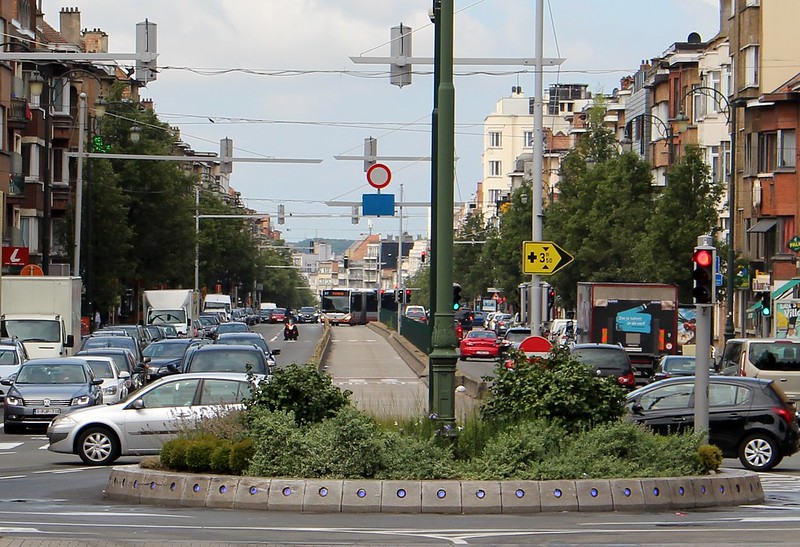 After heading down, headed towards a different Metro station, Belgica, along the way spotting something else for the transport nerds: tram works in progress on route 19. 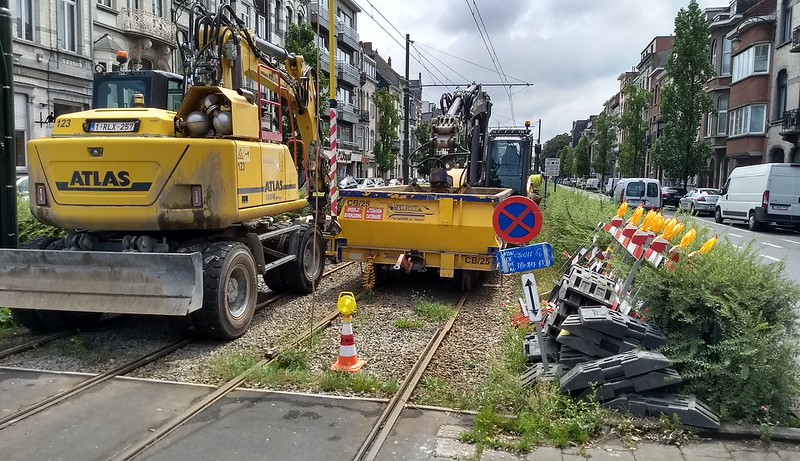 We were looking around for some lunch. Eventually we found the Belgian equivalent of a greasy spoon. (Looking back on Google Maps, it appears to have been closed every single time a Google Streetview car has come past.)

They didn’t speak English, but with their willingness to help, and my few words of bad French pronunciation and a lot of gesturing, I managed to order lunch. It probably helped that of the four of us, I only had to order 2 x 2 identical dishes.

From there it was Metro and tram to my cousin J and his wife V’s place in the northern suburbs. And we found it without having to ring them. Achievement unlocked! (See, I told you a properly functioning phone with maps and GPS can help!)

Their neighbourhood (well, at the time – they’ve since decided to move) is interesting – mostly townhouses and apartments; what we might call medium density, with both street and off-street parking. 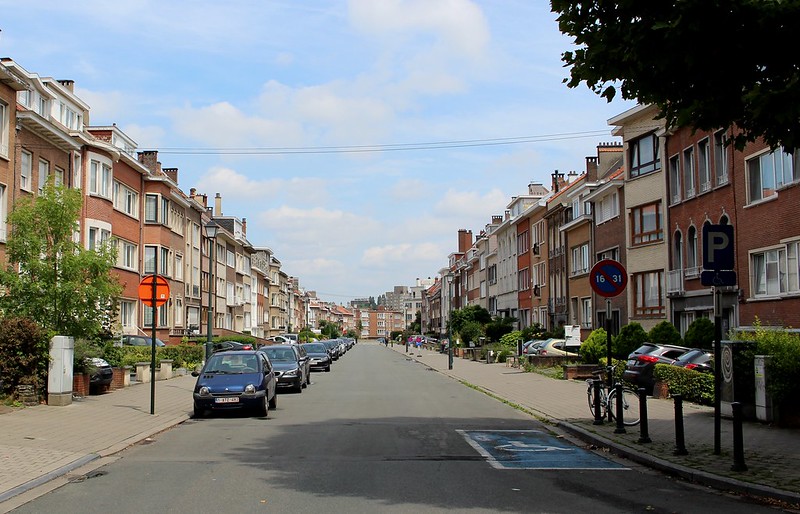 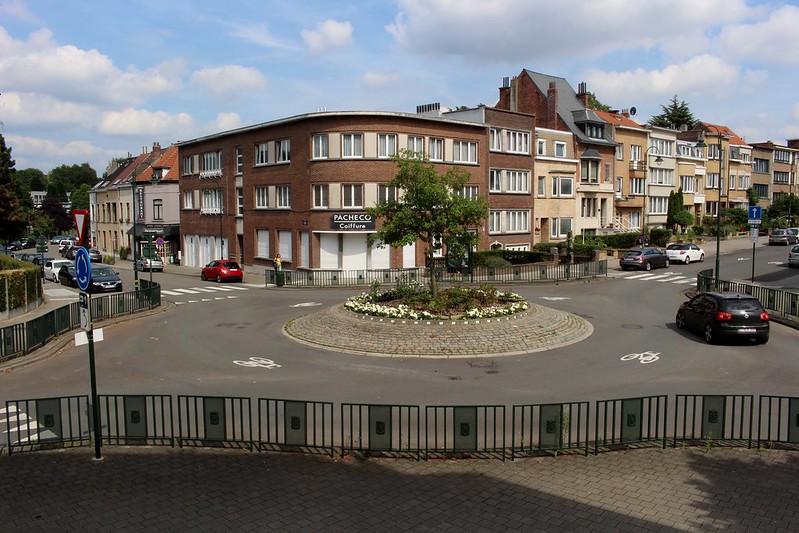 We chatted, said hello to the baby, and they filled us up on some traditional Belgian cake.

From there we walked with them through the nearby parks, along the way seeing the Japanese Tower and the Chinese Pavillion – very impressive, even if disused for the forseeable future because (as J told me) the authorities found structural problems with the buildings but they haven’t been organised enough (or well funded enough) to finish fixing them. 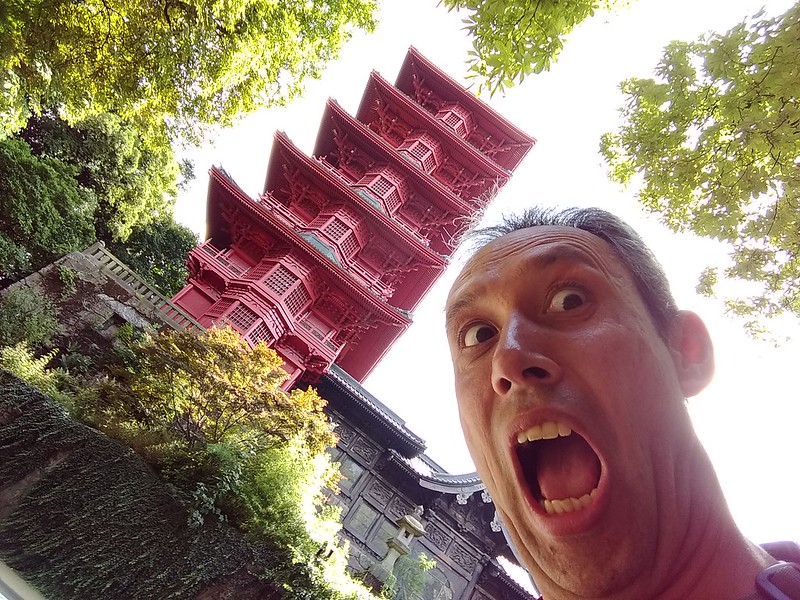 We also saw the King’s palace — that is, where he lives. There’s another more central palace where he works. Which means he commutes. I doubt he takes the Metro.

Eventually we reached the Atomium. It’s a curious space-age structure, inspired by the components of an atom, created for Expo 58, and now a tourist attraction. 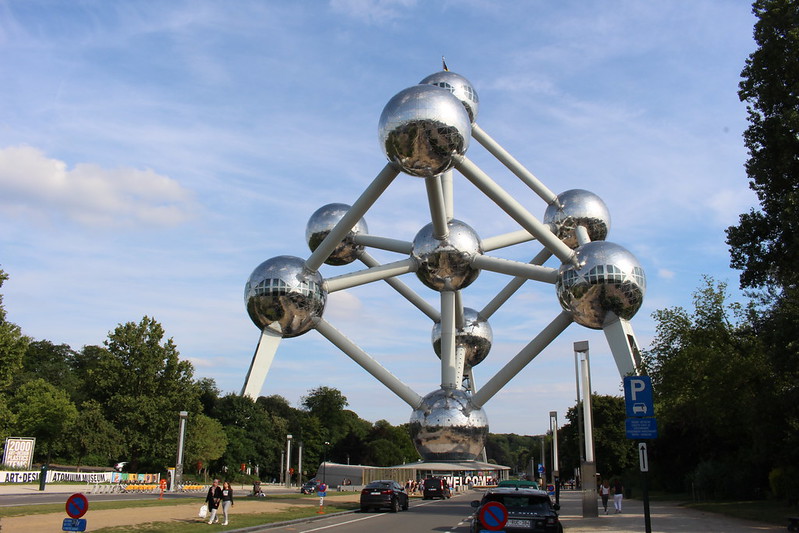 Supposedly the Atomium is an icon of Brussels. I can’t say I’d ever heard of it before. But we went up, and it’s pretty impressive. The various balls have different museum displays and views if the city. They’re connected by escalators or stairs. 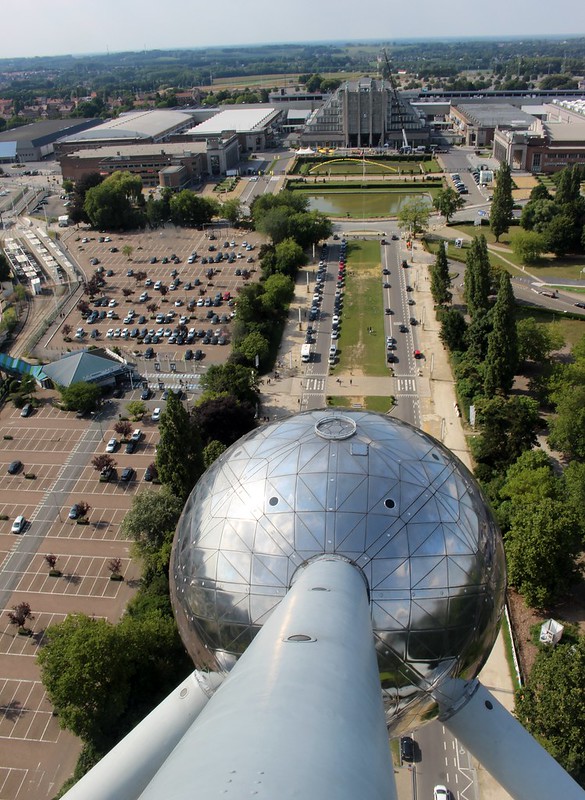 A plethora of solar panels on this building, visible from the Atomium: 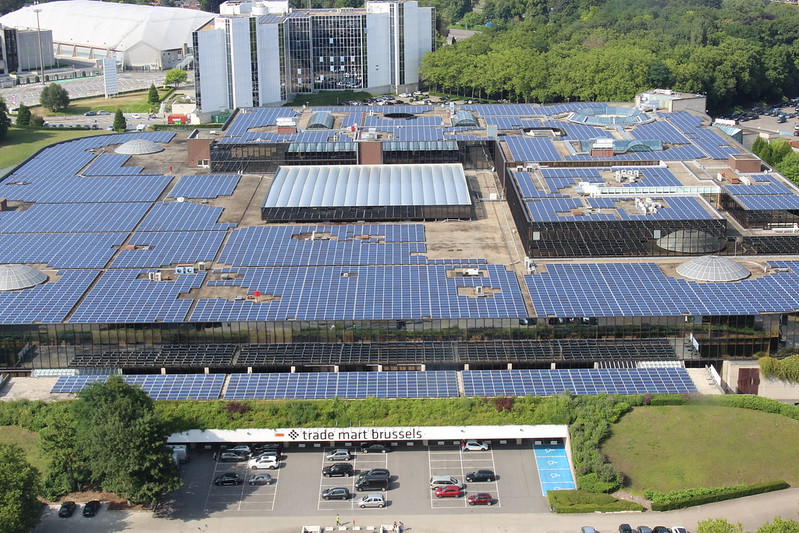 Also nearby, Mini Europe. Not really our thing; we gave this a miss. (See it bigger here if you want to go sight-seeing.) 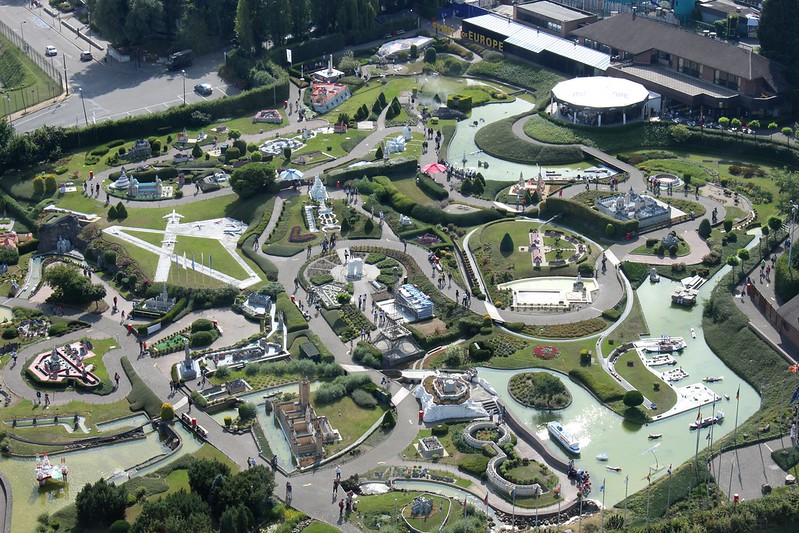 We could also see back to the Basilica where we’d been earlier in the day. 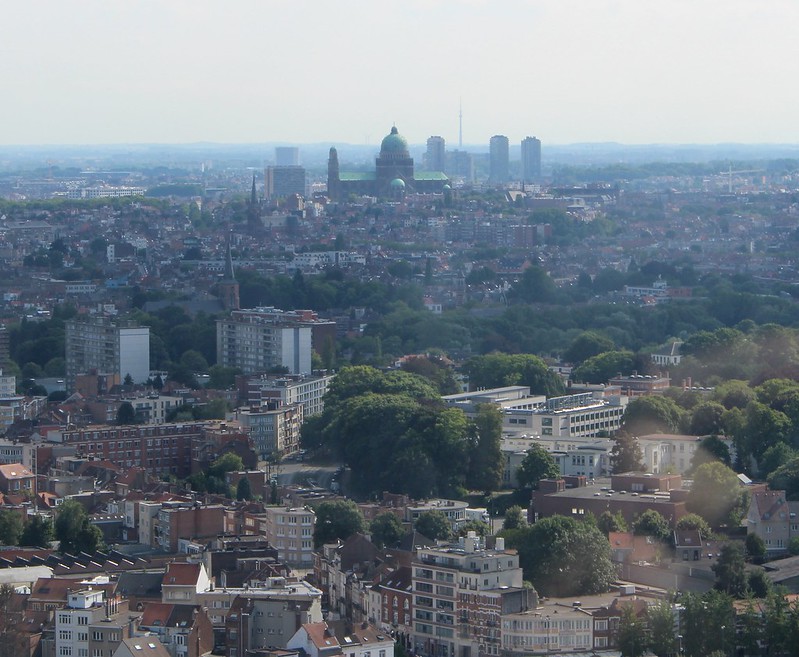 After exploring the Atomium we headed back for the Metro. Nearby there was loud music playing, and a crane was holding a thing full of a dozen or more people, and every so often a balloon would be released from it. I assume it was for some reality TV show, or some sort of weird amusement ride. 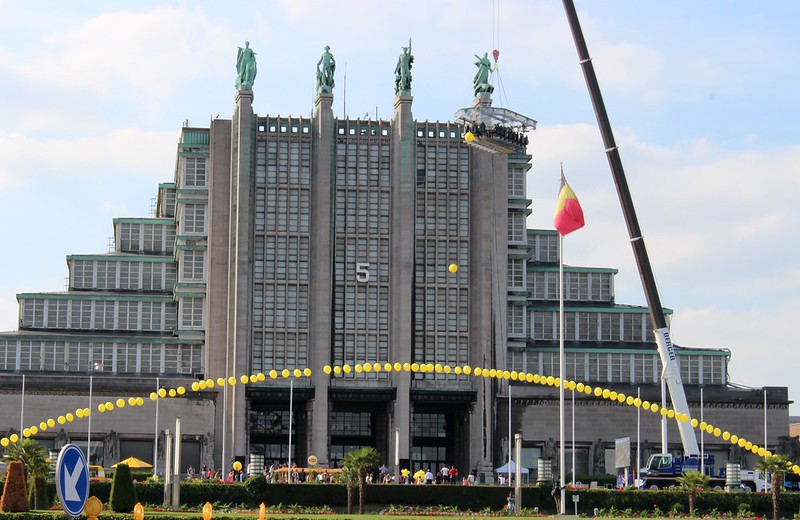 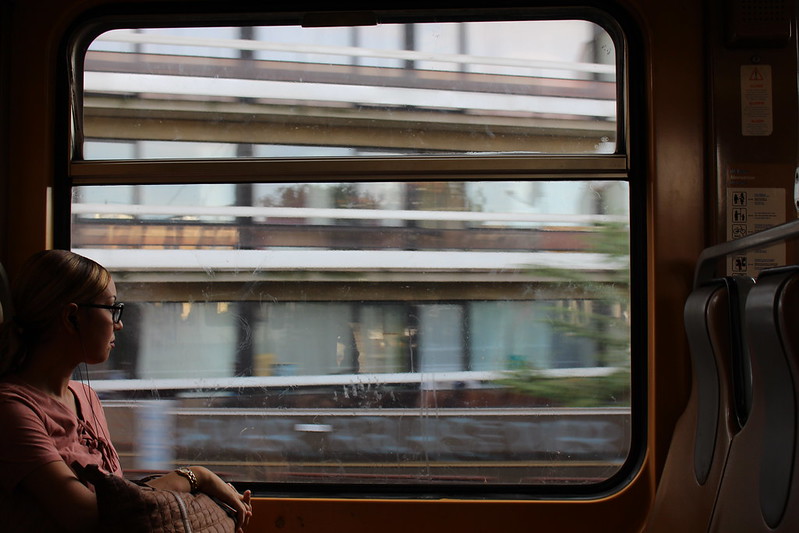 Back to the flat, then had dinner down in the square at the same Turkish restaurant where we’d eaten the first night in Brussels.

As we dined al fresco, we enjoyed the ambience, only interrupted a few times by clueless motorists driving into the mall, through, finding the way blocked, then driving back out again. 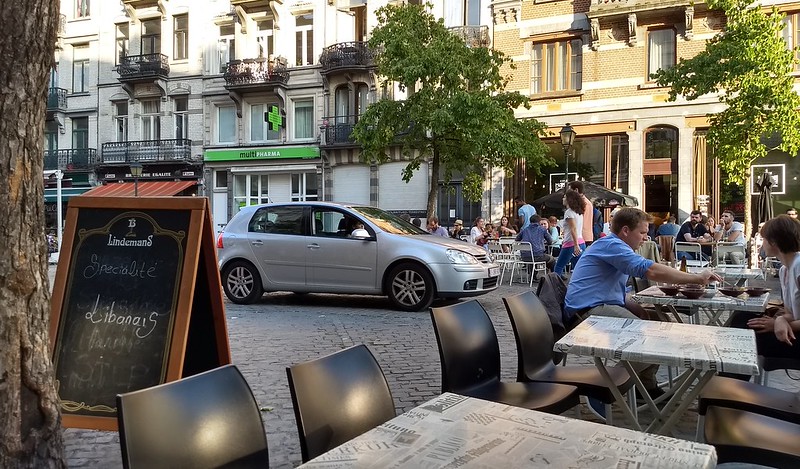 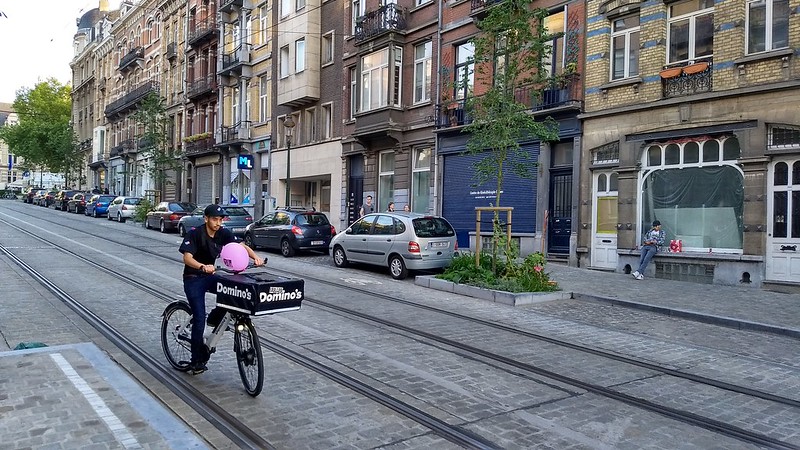 After dinner we went for a walk to explore the surrounding streets, finding a food truck festival – damn, that would have made a good dinner option too.

Back to the flat. The next morning we’d be on the move again, back to London.

2 replies on “Brussels from above”

It’s a bunch of people having lunch suspended from a crane. Dining in the sky is apparently commercial thing.

@andrew, yikes. Watch out below if I’m ever in that situation. Hope they have a bucket on board.