We headed back to our Brussels Zuid/Midi Station, wary again of infestations of pickpockets, but again seeing none. Seriously, I was doubting the numerous reports of this — either they’re invisible to me or they simply aren’t there since the military and police have moved in following recent terrorist attacks.

I bought tickets from the ticket machine, and this time it worked first go. Weekend fares are cheap in Belgium by the way; half the usual weekday price, and during summer they define the weekend as being from Thursday 7pm to Monday evening. 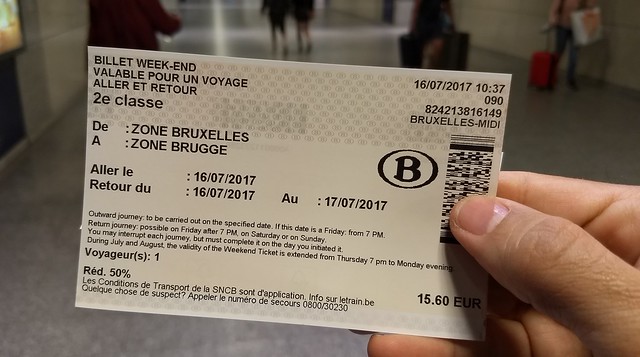 Our destination was the historic city of Brugge (Flemish)/Bruges (French), in the north of Belgium. It seems odd that the most common spelling is Bruges. If it’s a Flemish town, why not use the Flemish spelling?

Despite it being a long train, the cheap weekend fares probably contributed to the carriages being very crowded – no seats to be had in Economy, and we couldn’t figure out if it was possible to upgrade to First Class (with the benefit of hindsight, it appears yes, you can), so we stood as far as Ghent, when lots of people hopped off. 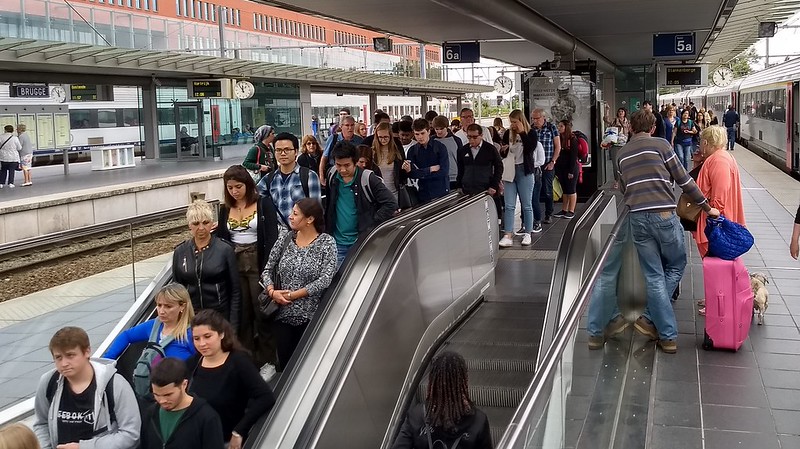 After about an hour on the train we got to Brugge. The station was busy, but an upgrade in 2009 has left it handling the crowds quite well, apart from queues for the escalators. Ten platforms (five islands) are connected via a subway to a concourse in a grand 1939 building, and out the front is a huge plaza with bus interchange. 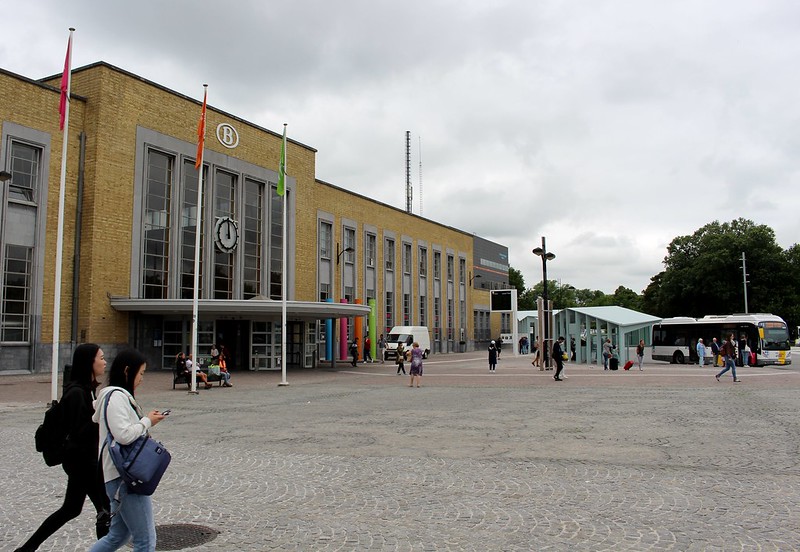 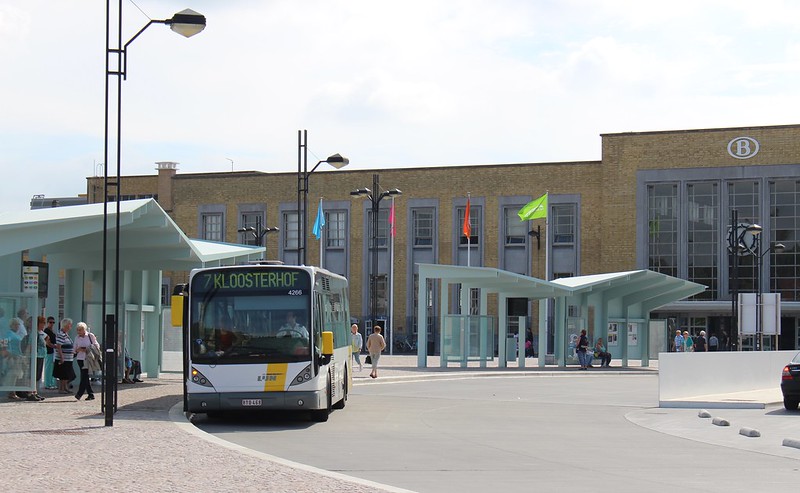 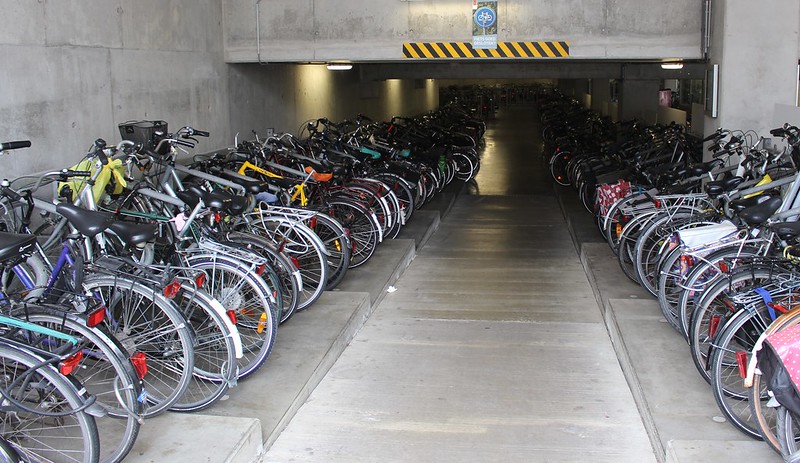 Off to one side is the biggest undercover bike parking facility I think I’ve ever seen – certainly bigger than the (not insubstantial) bike parking at Singapore MRT stations.

The historic centre of Brugge is a few hundred metres away from the station, and it was a pleasant walk down cobblestone streets to get there. Much of the crowd from the train was headed in the same direction, and it quickly became clear that this tourist town would indeed be bustling with tourists on a sunny Sunday. 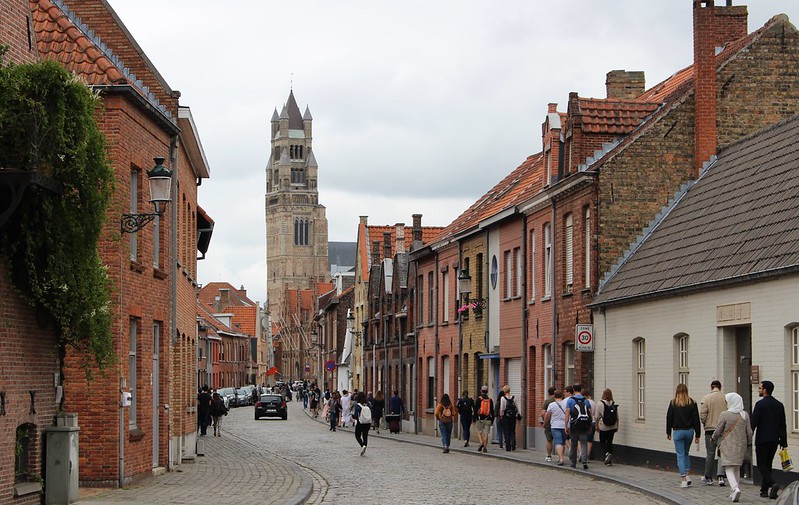 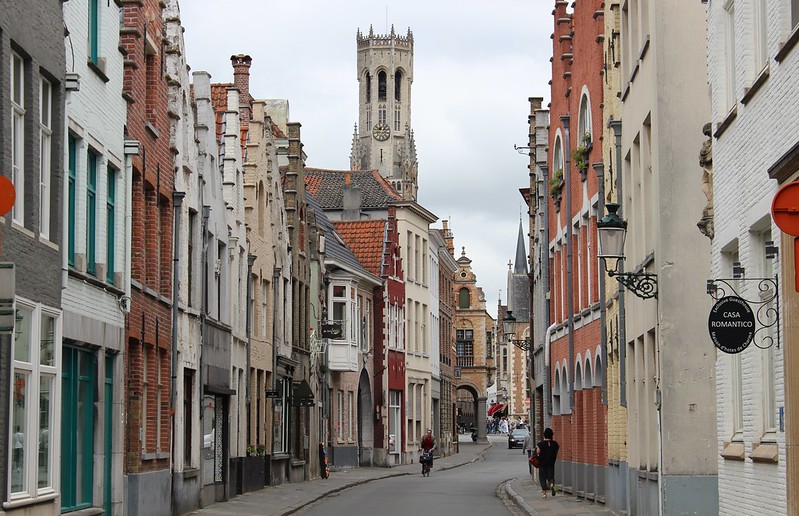 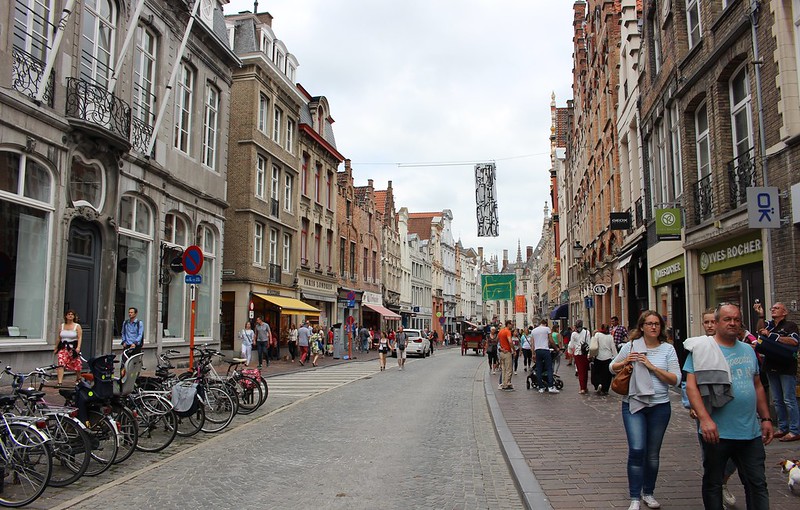 Brugge really is a gorgeous town. No wonder (like Bath) it’s got UNESCO world heritage status.

The city centre is mostly free of cars, though there were a few, as well as buses, taxis, cyclists and horse-drawn carriages. 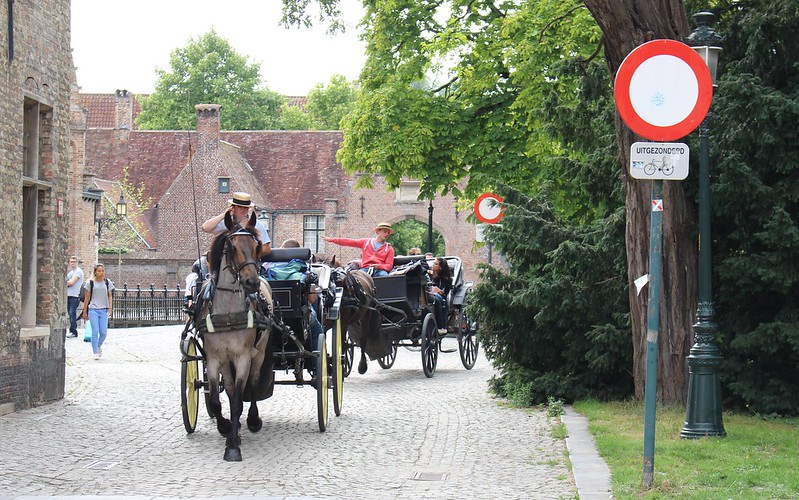 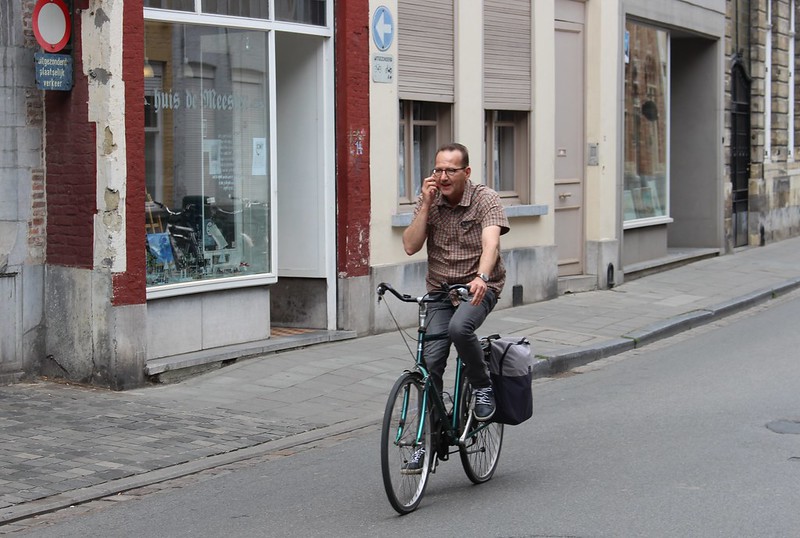 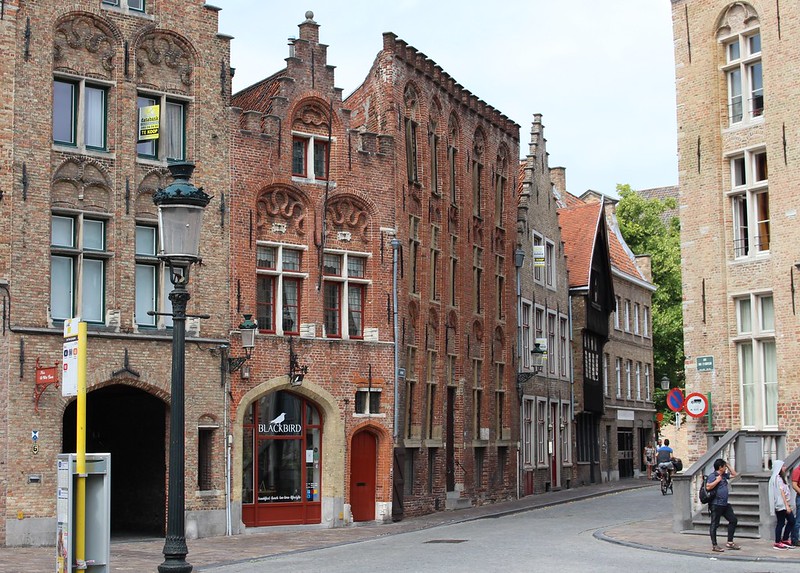 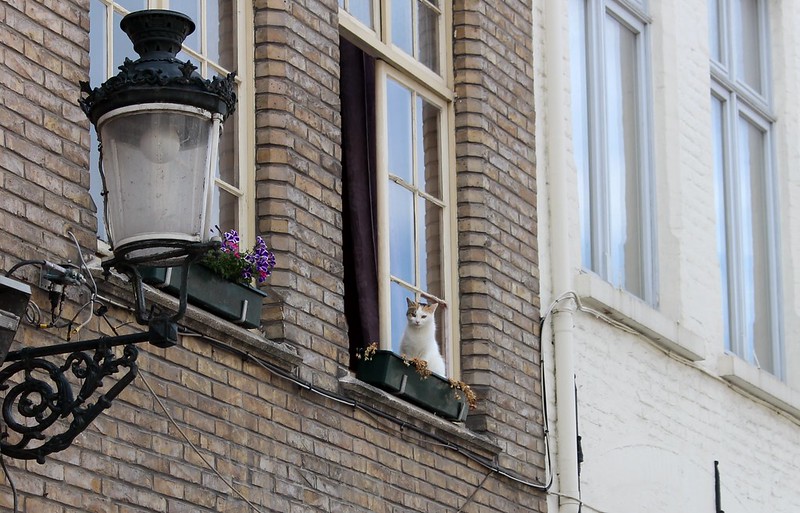 Much of the architecture is medieval, though every so often we’d see some new-fangled building built as recently as only the early 1800s.

Some of the older buildings have been re-purposed along the way. This one is now a Mcdonalds. 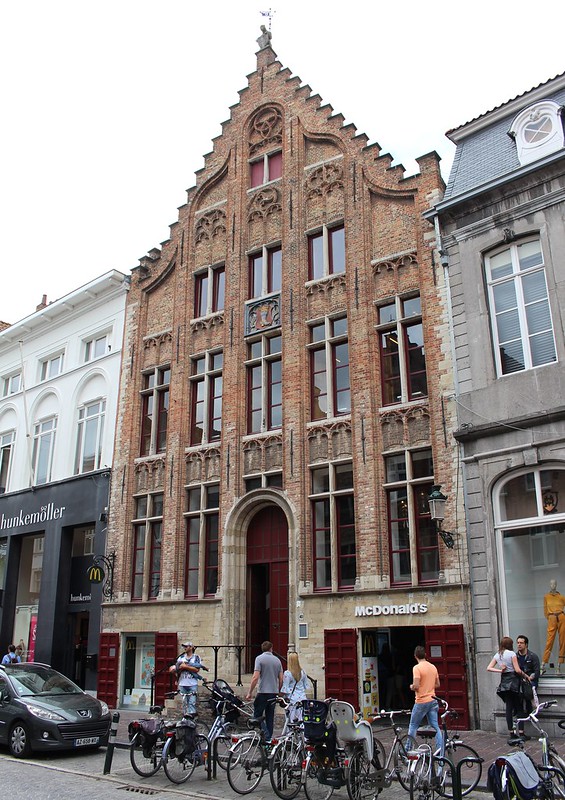 Lunch was in a small cafe, with waffles for dessert.

It took us quite some exploring before we finally got to the area where the main square/s are located. We considered climbing the bell tower (I did so back in 1998) but there was quite a long queue, so we kept exploring. 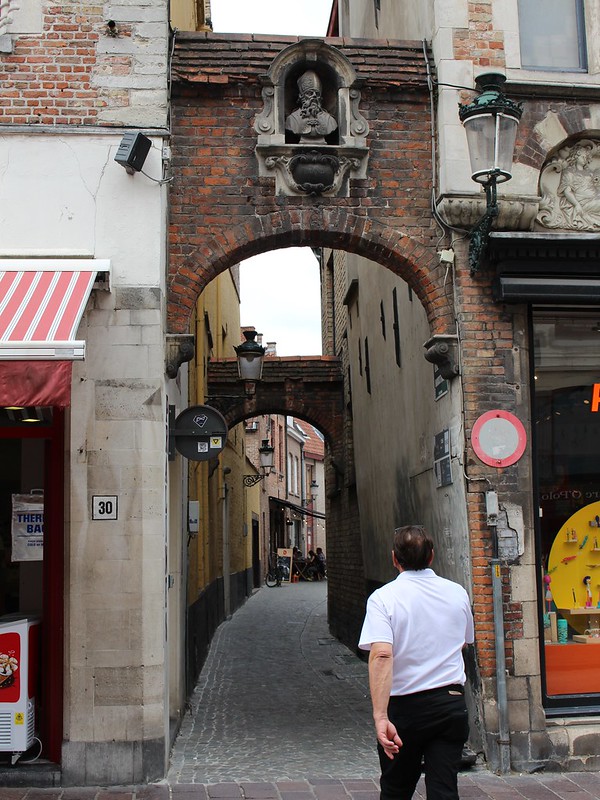 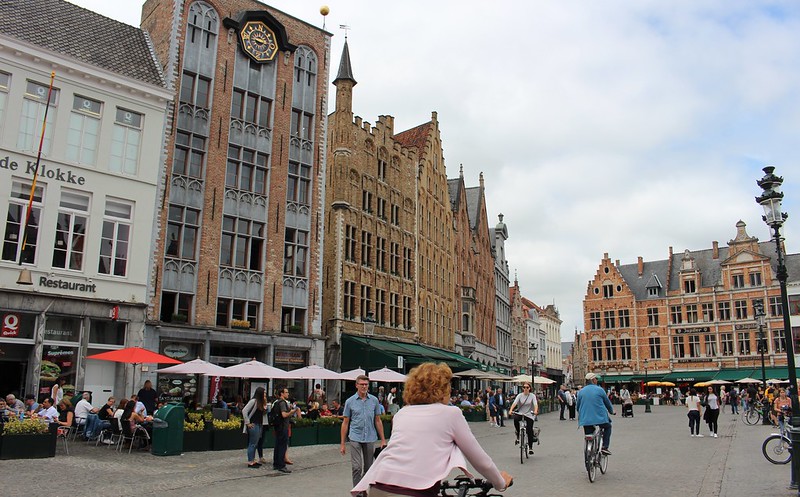 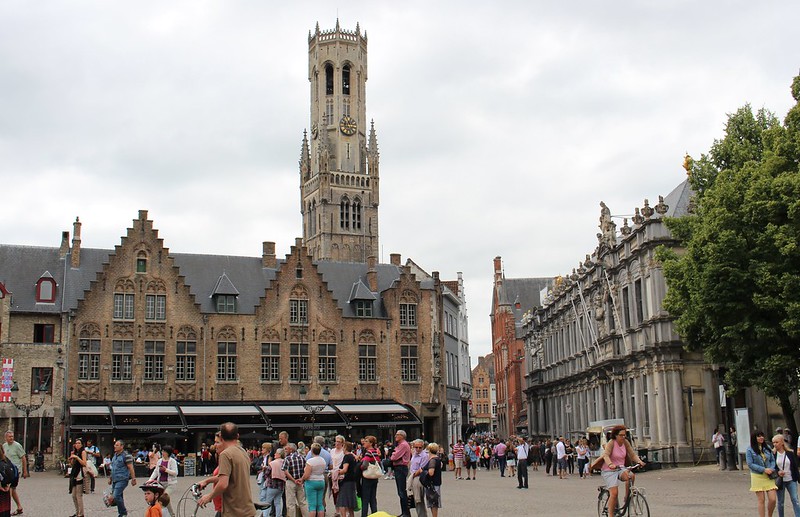 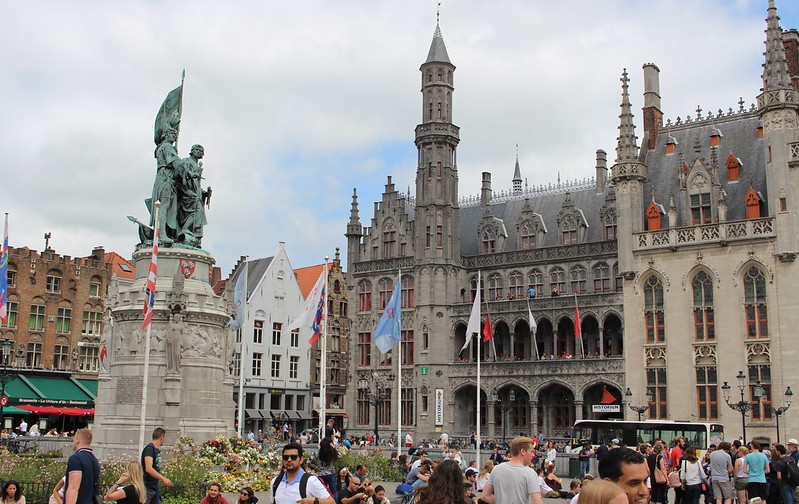 Excuse me gentlemen, are you aware that you have Daleks on your heads? 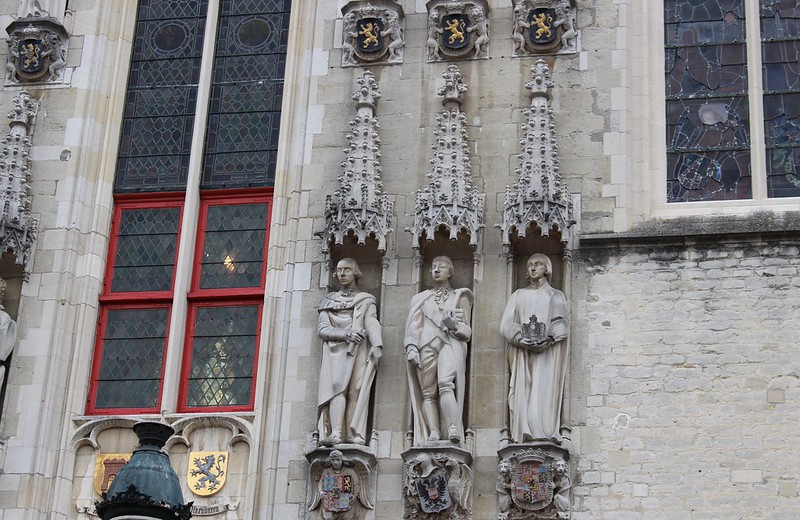 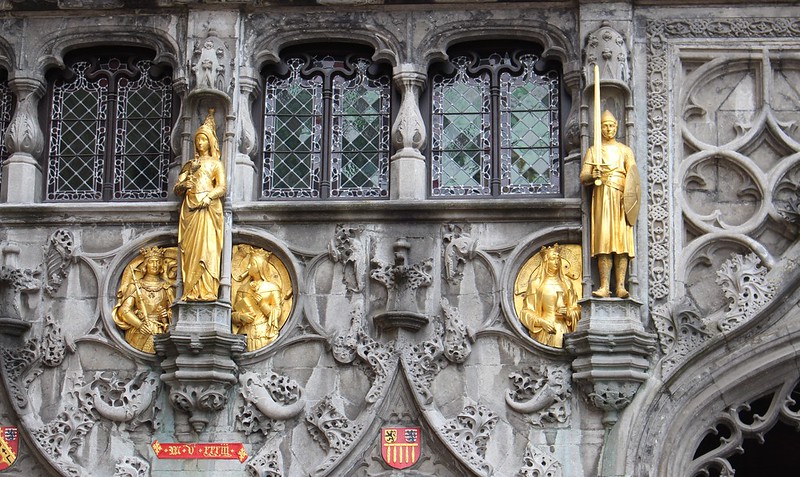 One highlight was Michaelangelo’s Madonna And Child (1504), apparently the only Michaelangelo sculpture that left Italy during his lifetime. We looked in a few other churches and museums which had some stunning renaissance works of art. 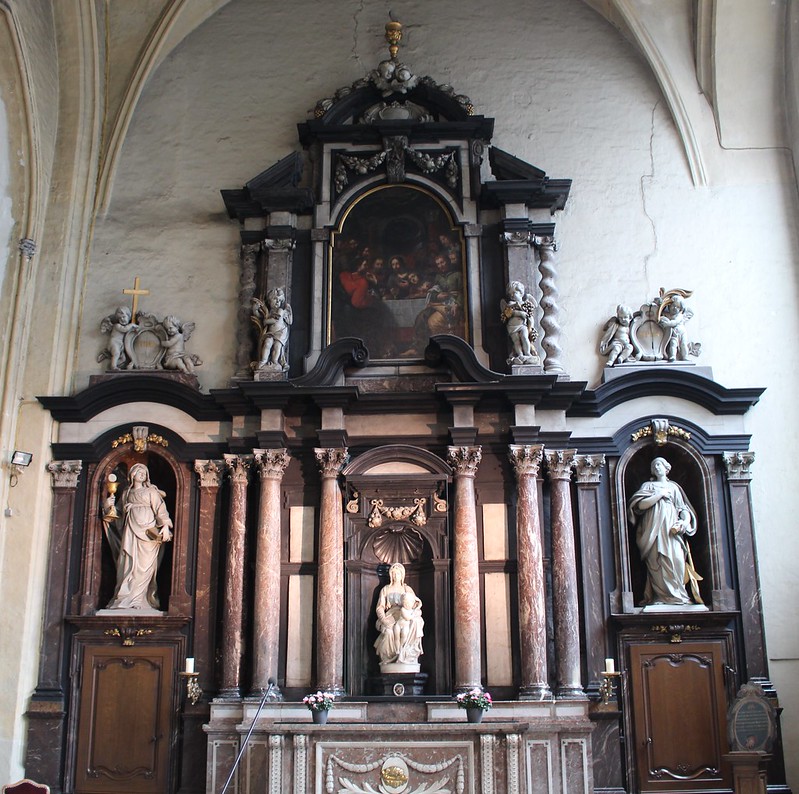 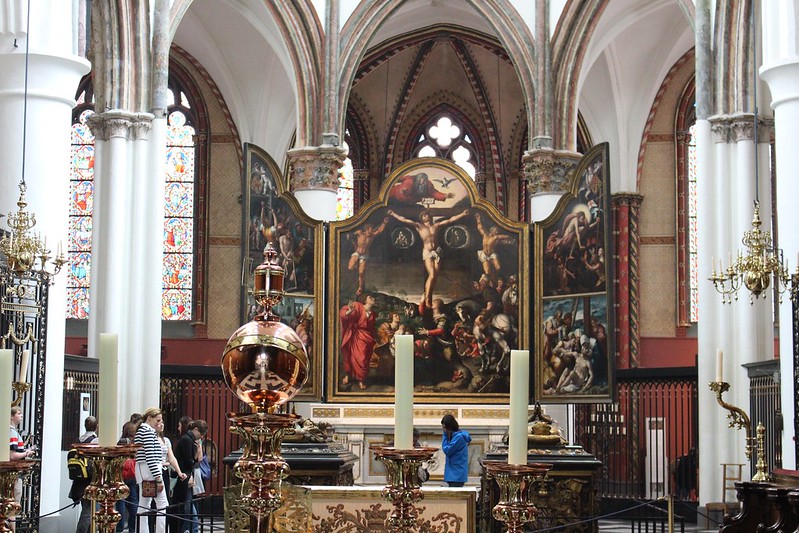 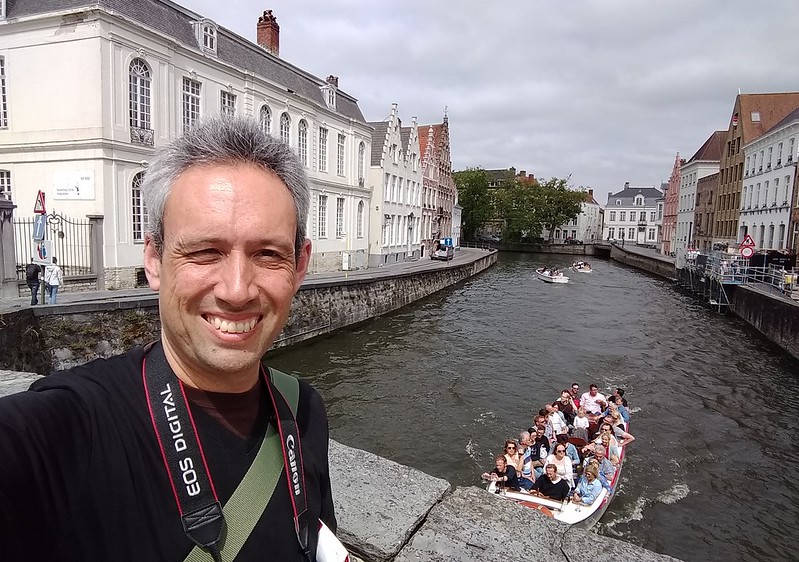 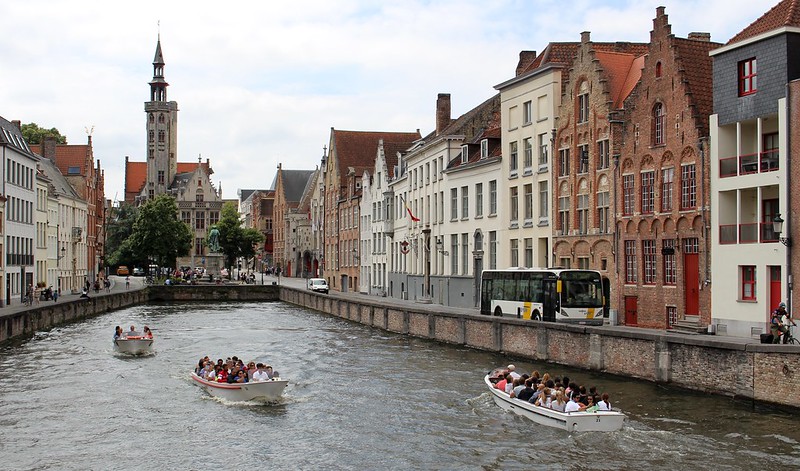 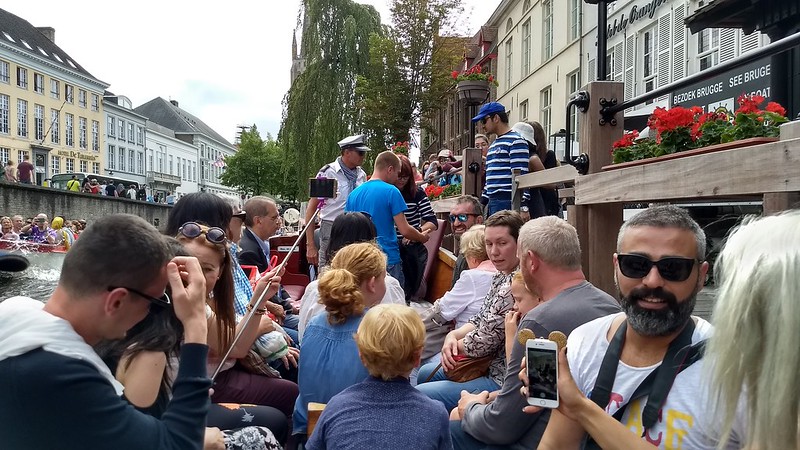 Lots of canals around the town. We did Canal boat tour, in part to have a chance to sit down for a while. There was a plethora of selfie sticks on the boat, held by tourists from all over Europe and beyond.

The guide was multilingual (as you’d pretty much have to be) and pretty jocular, telling historic anecdotes that may or may not have been true, and pointing out notable buildings. “That’s my house, that’s my brother’s house, there’s my sister’s house…”

More walking around after that. So we basically spent the day exploring, before heading back to the station. 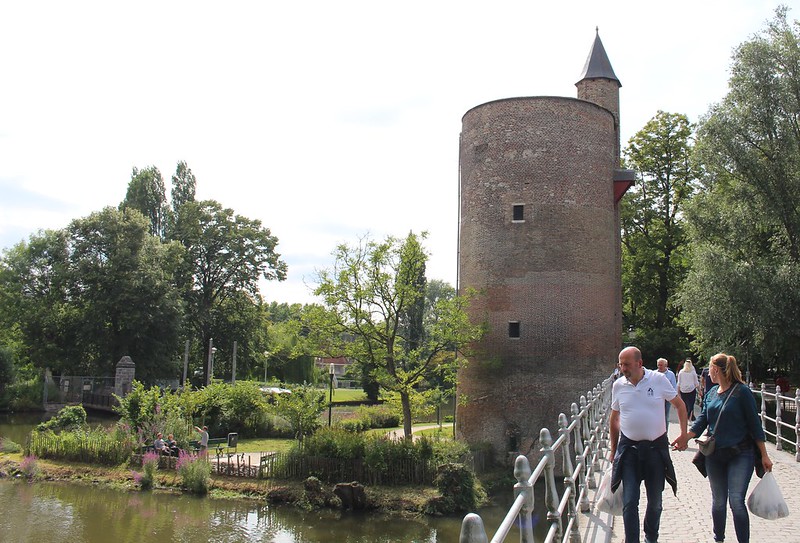 On the platform as we waited for the train, I was watching Twitter for the Doctor Who announcement… and the thirteenth Doctor is… oh, cool! I+J wanted not to be told; they wanted to wait until we were back at the flat on WiFi and could watch the proper trailer.

A shiny newish looking double-deck train rolled up, heading for Brussels. Unlike the train that morning, there was plenty of space on board, and the view from the top deck was great.

Back in Brussels, we headed to the flat for a little while, then back out to dinner. 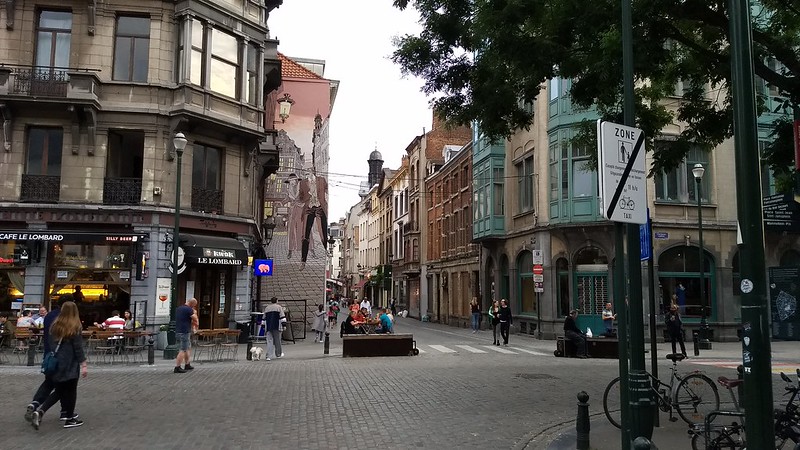 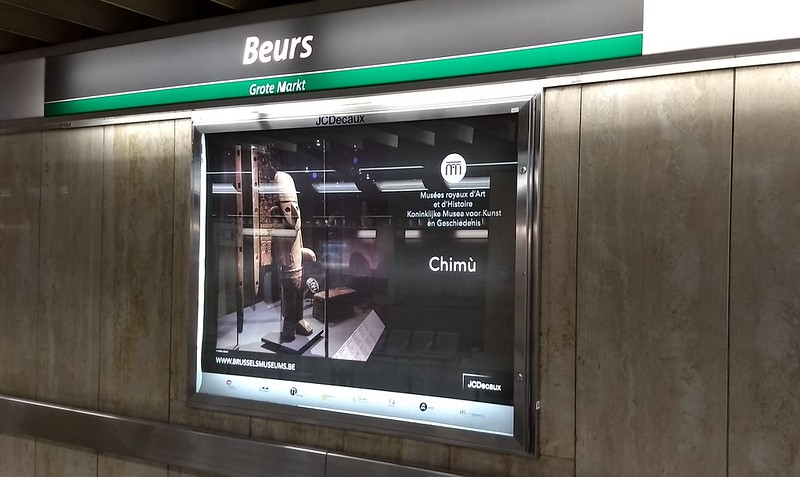 We’d been told about a good restaurant near The Grand Place called Nuetnigenough, and headed to Metro Line 3 to get there — this is actually an underground tram line, aka a pre-metro line; built as light rail ahead of a possible later conversion to fully-fledged metro. (More about this in this post.)

The restaurant was small but busy, and after a 10ish minute wait for a table, we sat down to a thoroughly delicious dinner, alongside some fine Belgian beers, before catching the tram/pre-metro/whatever back again.

One more full day in Brussels.

One reply on “In Brugge”